Even though the packaging design for METAXA Grande Fine looks incredibly modern, the brand has been around for several decades. Inspired by Greece's customs, traditions, and scenery, the decanter is beautifully adorned with patterns and colors to match. Designed by Karavellas x Team, no detail was left unthought, and the Greek flavors within the amber spirit radiate throughout. 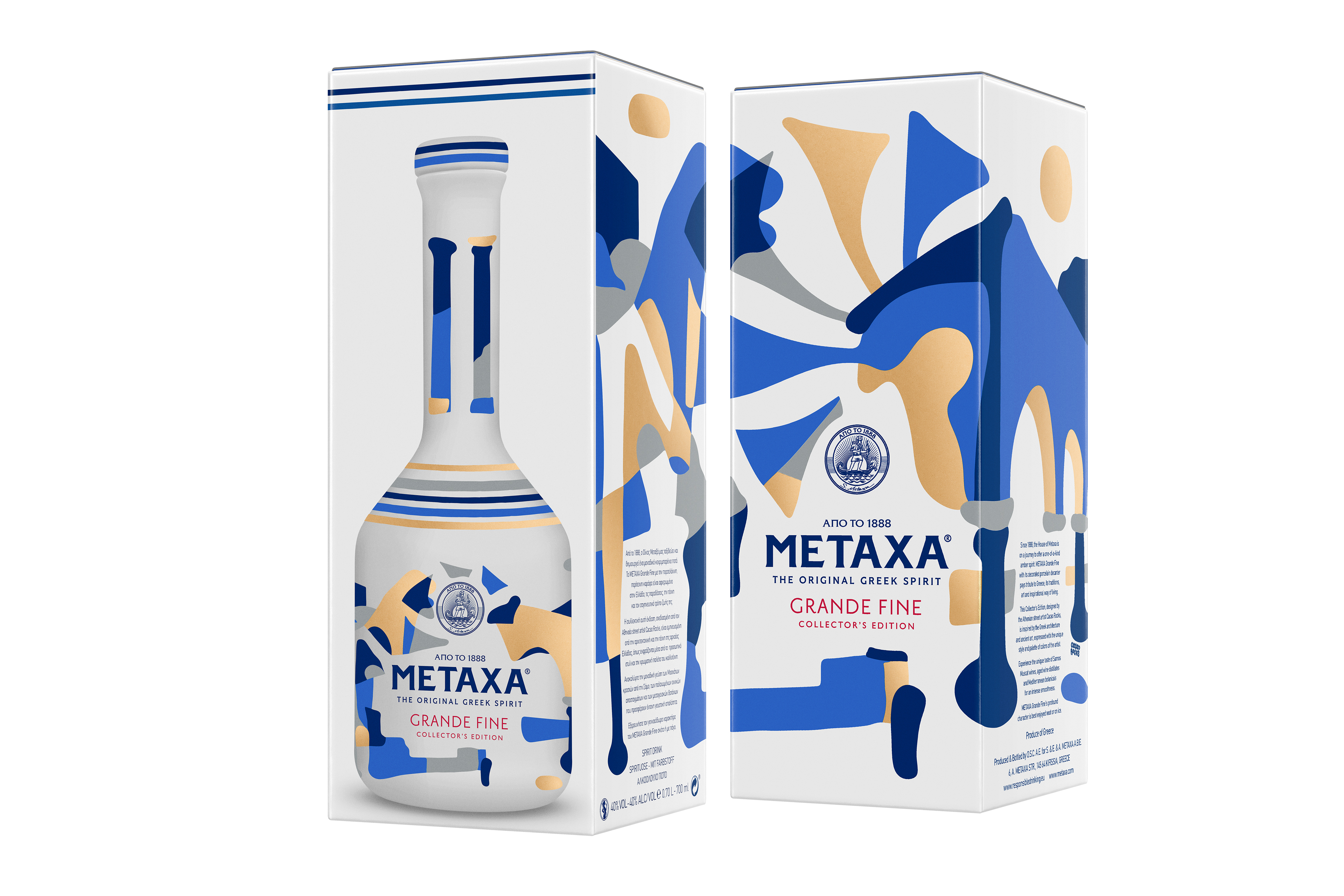 METAXA Grande Fine by Cacao Rocks, a tribute to Greece and the Artist’s heritage.

Since the first time it was introduced several decades ago, METAXA Grande Fine has been acknowledged as a unique aesthetic proposal that pays tribute to Greece, its traditions, craftsmanship, art and inspirational way of living. In 2019, the House of Metaxa asks the street Artist Cacao Rocks to release his own interpretation of this iconic decanter.

Cacao Rocks’ biggest source of inspiration for METAXA Grande Fine comes from his French Grand Father. He discovered Greece during the second world war and fell in love with its culture and traditions. After the war, he travelled to the Cyclades and developed there a talent for film photography. His favorite island was Mykonos, where he took hundreds of pictures of its architecture, Art and typical bohemian way of life. 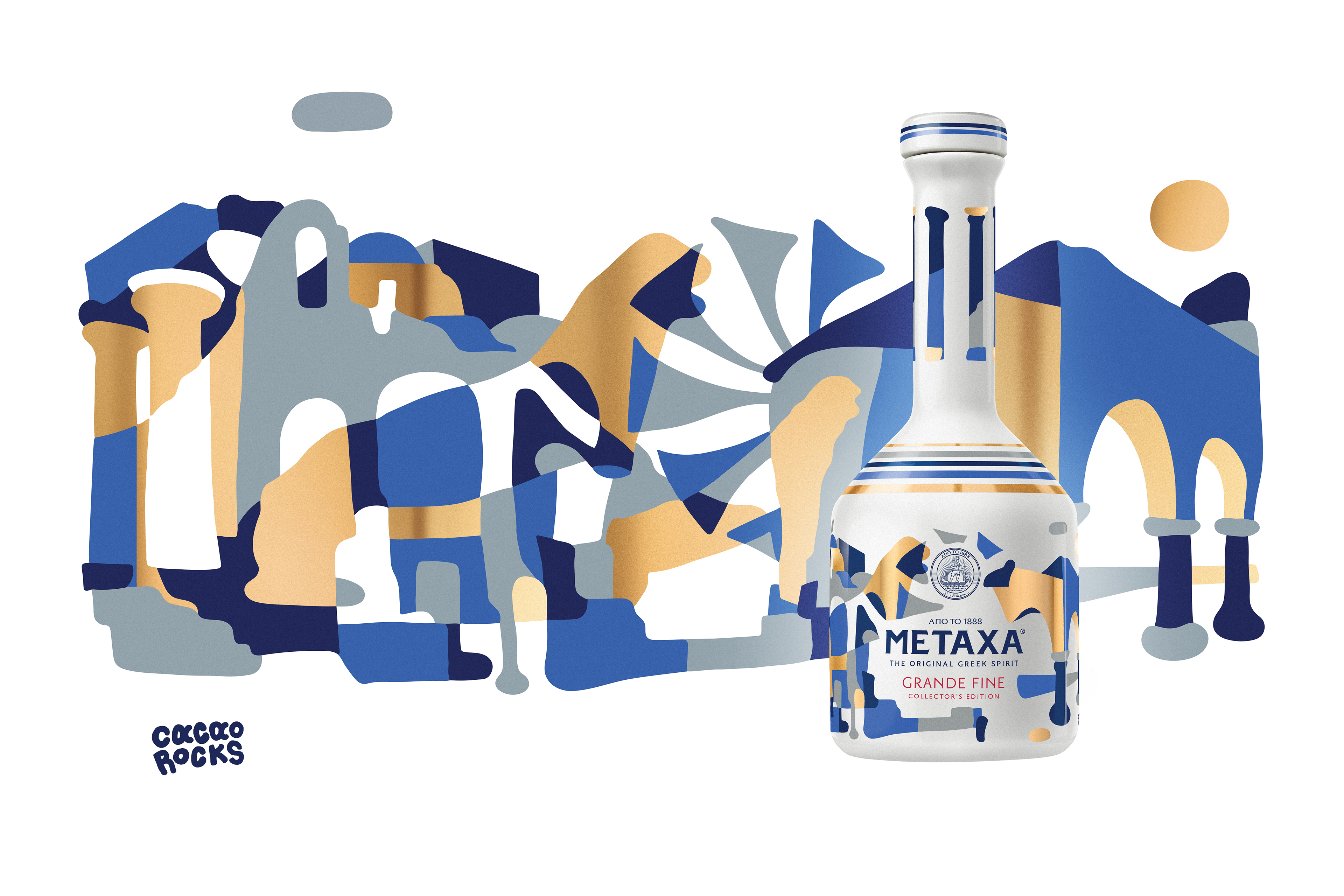 Cacao Rocks inherited from all his Grand Father’s photographs; pictures he’s keeping safe and which are driving him through his Art. When he was asked by the House of Metaxa to give his own interpretation of the Grande Fine decanter, the Artist decided to pay tribute to his Grand Father and follow his path in Mykonos, as he says:

“I had the honor to be asked by the House of Metaxa to design one of their iconic decanters. Inspired by my Grand Father, I wanted to follow his path and visit again the Cyclades and get pictures of their typical landscapes. This is how I created the new METAXA Grande Fine, my own interpretation of the Cycladic architecture, a tribute to my grandfather. “

On the island, his favorite Polaroid camera in hands, he decided to take the same pictures his Grand Father took decades ago. Back to Athens, he mixes the original photographs from his Grand Father with the ones he took with his Polaroid to create to new design of METAXA Grande Fine. 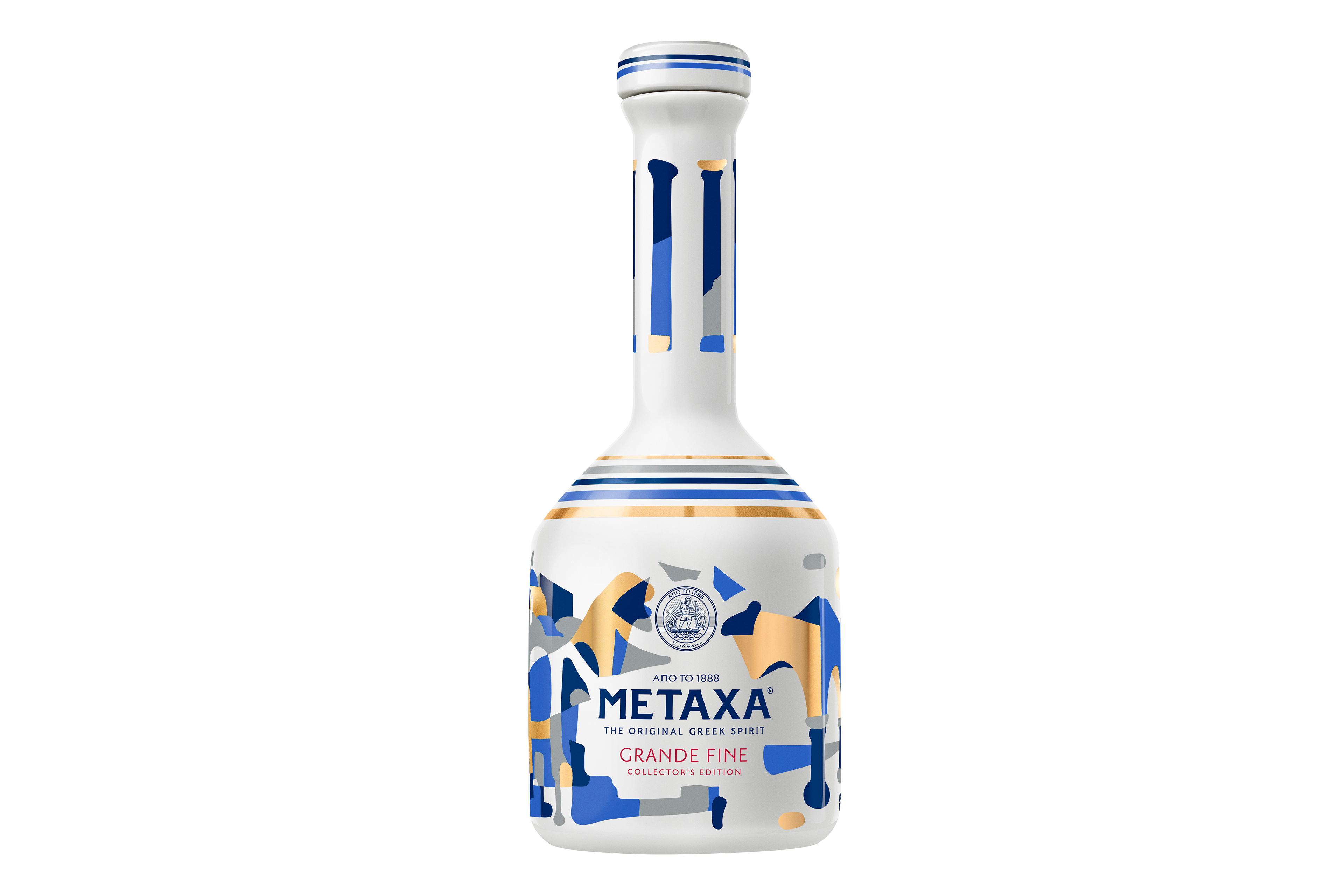 The decanter is decorated with patterns inspired by the famous Paraportiani Church, the Leo of Delos island, the windmills of Mykonos and other Cycladic symbols, using the Artist’s palette of colors: white for the Cycladic architecture, blue for the Aegean Sea and gold for the sun.

His statement for this interpretation was to make people appreciate the Greek touch, the Greek culture, the Greek flavors through a one-of-a-kind amber spirit: METAXA.

Note, that the painting continues on the three sides of the gift box, so when it is placed on the shop shelves, one box next to the other, you can see the whole painting as a whole.