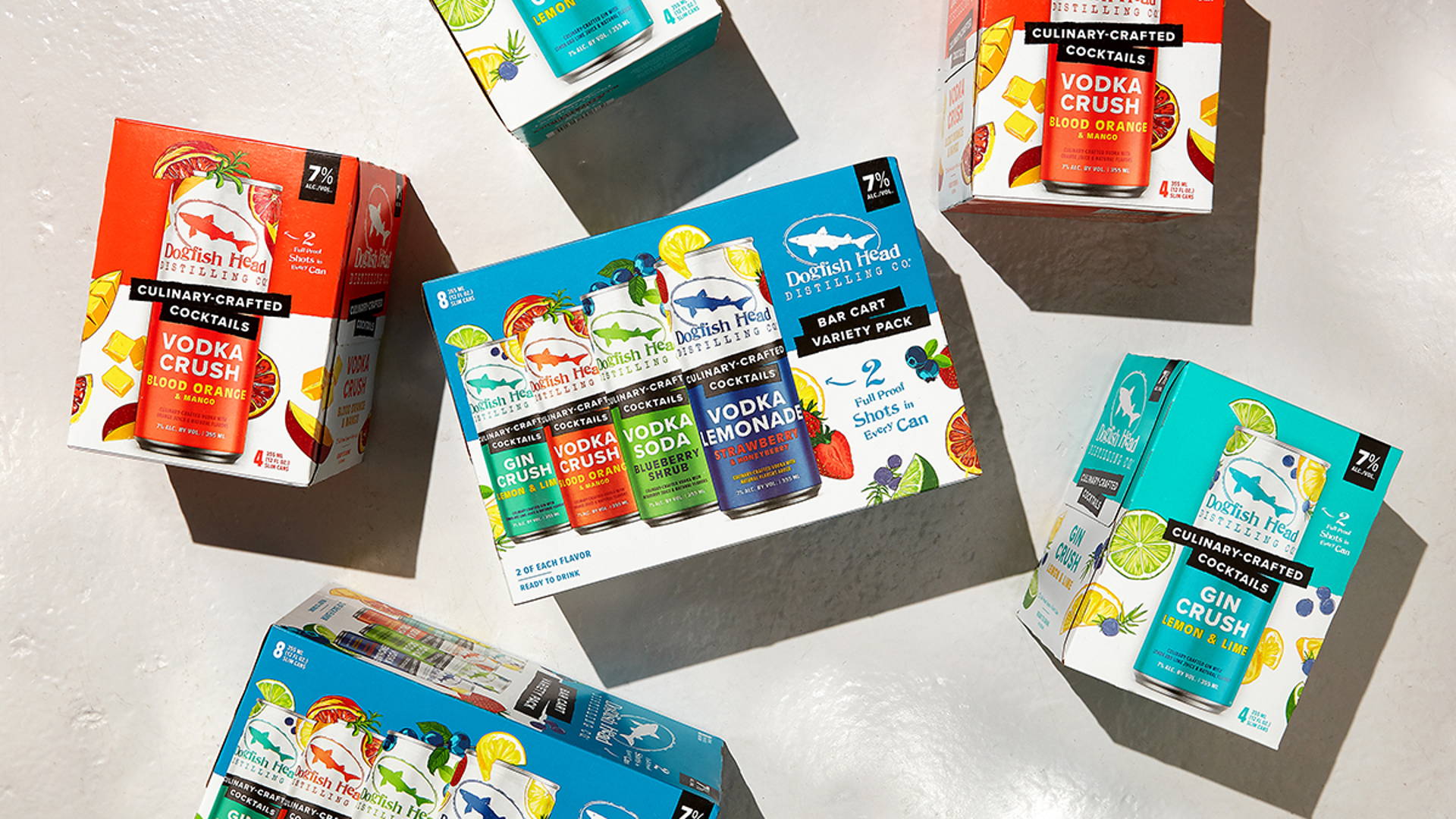 Dogfish Head founder Sam Calagione opened the brand’s first brewpub in 1995—not only was it the first brewpub in the state of Delaware but, at the time, the smallest commercial brewery in the country. Today, they remain pioneers in the craft beer world with experimental recipes, such as its hit Midas Touch, made from a formula based on the ingredients found in drinking vessels from King Midas’ tomb.

What you might not know is that Dogfish Head has also distilled spirits since 2002. Calagione offered some engineering fans a trunkful of World Wide Stout if they could design a still using a reclaimed stainless steel grain silo, a 200-gallon pot dubbed “Frankenstill.” Since then, the beermaker has expanded its distillery, and they produce brandy, gin, whiskey, and vodka, experimenting with ingredients with a continued focus on quality and flavor in small batches.

Dogfish Head’s spirits are also the base for its new Ready-To-Drink (RTD) cocktail line. The canned cocktail has grown in popularity in recent years, and the brewery saw an opportunity to provide RTD craft beverages using unique micro-distilled spirits made from scratch. Looking to effectively and attractively communicate their cocktails’ standout characteristics and restaurant-level quality and taste, they turned to agency Moxie Sozo to create standout packaging.

“Dogfish Head came to us to create the variety pack and then refresh the whole line of cans and variety packs after the initial launch," said Nate Dyer, senior creative director at Moxie Sozo. "Afterwards, we went back to the cans, and we started a redesign to optimize the hierarchy and elevate the overall look. We made a few tweaks to up the premium factor without deviating too far and losing people familiar with the Dogfish Head brand and its products.”

Moxie Sozo started by naming the variety pack, calling it the “Bar Cart,” emphasizing the craft and bar quality of the RTD cocktails. Dogfish Head’s cocktails are bar-quality without needing to stock a full bar or have bartending skills. Even for those who like to bust out the shaker and muddler, there are some nights when it’s nice to relax and pour a ready-made cocktail.

“These are scratch-made cocktails that are restaurant quality. Dogfish Head didn't see many similar options in the market,” said Mike Bowman, senior account director for Moxie Sozo. “There are a lot of seltzers and alcoholic kombuchas, but Dogfish Head’s canned cocktails are just like what you would get from the bar—scratch-made drinks.”

“Variety pack naming is another thing where every brand has already done it," Bowman added. “So we knew that for Dogfish Head, the focus had to be on restaurant quality. The whole idea is that Dogfish Head canned cocktails are just like what you'd get in a bar. So the name Bar Cart seemed like an obvious choice.”

Messaging on the Bar Cart outer pack retains the signature look and feel of Dogfish Head’s other offerings and manages to feel at home within the world of the craft brewer. The outer packaging expertly incorporates core brand elements with attention-grabbing graphics and callouts highlighting critical differences between the brand’s craft RTDs and the competition, such as the mixologist-minded drinks and two shots of spirits per can.

However, the packaging still has a distinct look and feel. “Beyond using the dogfish and the shark in the oval, they're pretty differentiated as far as looks," said Dyer. "There is some carryover in some of the typefaces and graphics. But overall, the beer and distilling are aligned as different products.”

New can labels follow a clear and intelligent visual system. Each offering has a dominant color based on the primary flavor. The upper third of every can features Dogfish Head’s “off-center” logo, surrounded by the cocktail’s secondary ingredients. Labelmaker-inspired graphics carry the “Culinary-Crafted” and “Cocktail” messaging, while strong, straightforward typography communicates information such as the cocktail name balanced with at-this-point-retro Dogfish Head type choices. The canned cocktails retain that core off-center spirit like Dogfish Head's beers.

“Off-center means that Dogfish Head doesn’t take itself too seriously, said Sophie Bailey, designer for Moxie Sozo. It’s a little bit quirky and not too uptight, except for craft and quality.”

Moxie Sozo also designed all the supporting collateral, such as online and in-store support for Dogfish Head’s continued efforts in the burgeoning and competitive RTD cocktail space.

The agency’s focus on Dogfish Head’s commitment to mixologist and bar-quality cocktails in the convenience of RTD format is evident in the packaging and can design refresh. Clear differentiators, like unique ingredients and small-batch, craft spirits, and alcohol content, are immediately communicated while retaining the nature and character of Dogfish Head’s entire portfolio of products.

So, if you're looking for a pool and beach-worthy RTD that doesn't skimp on quality or craft, look no further than Dogfish Head's on-point, obsessively-poured over, and crushable canned cocktails—they won't disappoint.

Nuda Packaging Lets The Products' Tanning Abilities Speak For Themselves