In partnership with bourbon maker Jim Beam, Budweiser’s Black Lager is a limited-release beer with a hefty 7.1 percent Alcohol By Volume (ABV), especially when compared to typical Bud fare. The standard, red-label lager, by contrast, is 5.0% ABV.

The Reserve Black Lager is the second collaboration between the brewer and spirit maker, following the popular Budweiser Reserve Copper Lager, which returns alongside the new black lager by popular demand.

Anheuser-Busch’s new beer is aged on six-year Jim Beam barrel staves, imparting a bolder taste, describing the black lager as having “an oaky aroma with coffee and chocolate notes, a toasted malt taste, and a deliciously smooth finish.”

Specially made for the holidays, the limited-edition beer comes in the same glass “stubby” bottles as the Copper Reserve, but Black Reserve makes use of black and gold shades, with hints of red accenting the label. The design doesn’t veer too far from the stalwart brewer’s standard bottle and is more of an upscale interpretation with a touch of Jim Beam co-branding. 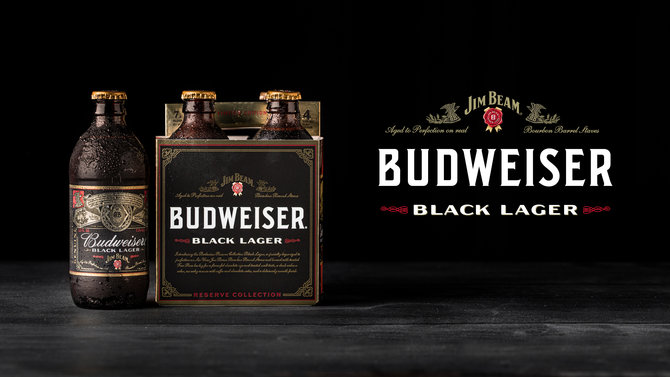 “Budweiser Reserve Copper Lager proved that when Budweiser and Jim Beam collaborate, good things happen,” said Ricardo Marques, VP of Marketing Core & Value Brands at Anheuser-Busch in a press release. “For the second collaboration between Bud and Beam, we wanted to brew something unique that would excite both beer lovers and bourbon aficionados. Budweiser Reserve Black Lager is a bold, bourbon-forward beer that’s perfect for the holidays.”

While the effort probably won’t win over your beer-elitist friend with fancy facial hair, the limited-batch offering might be more about Budweiser satisfying their regular customers’ desire for something special for the holidays.

Budweiser Reserve Black Lager will be available nationwide from October through the end of the year, while supplies last.

Other Half Brewing is Fun & Flirty

Pack of the Month: YUNGBLD Makes Us Thirst For Our New Shower Buddy, blond.