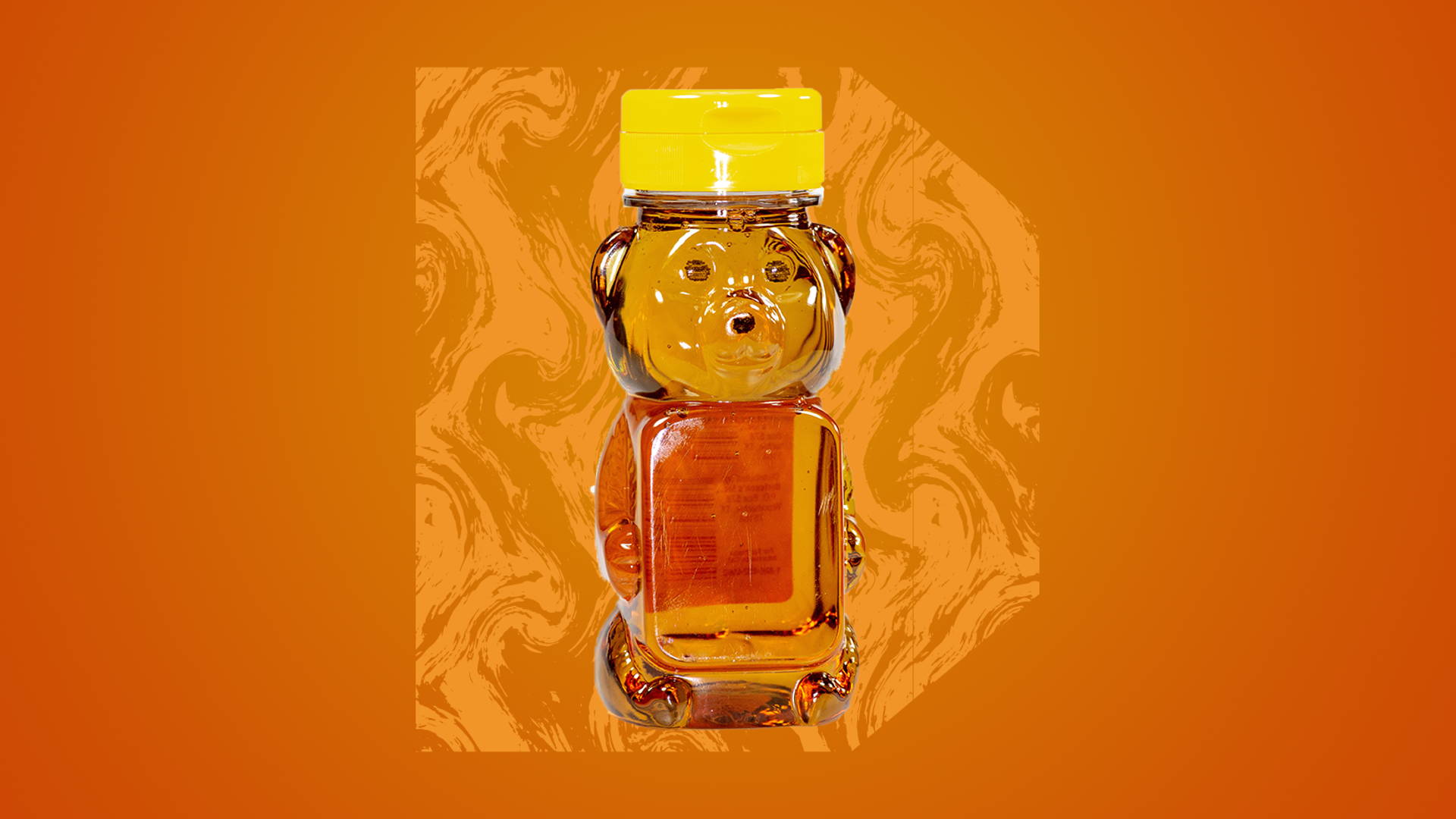 Why Do We Package Honey In Bear-Shaped Bottles?

Honey is a deliciously sweet, viscous substance, the tasty end result of bees collecting, digesting, and drying out sugar-rich nectar. It takes a lot of bees and a lot of work to make honey; to produce just one teaspoon of honey requires the lifetime work of twelve bees. It's also easily stored safely for decades and has medicinal properties as it's an antioxidant and can be used to treat burns. And did we mention the delicious part?

There’s little doubt why honey is so popular, but why does so much of it come in bear-shaped bottles?

While the bee would make for the most apparent vessel, honey packaged in little bear-shaped bottles is the norm, highlighting our boundless affinity for cute representations of charismatic megafauna. Bears would become a popular source of inspiration for fictional and cartoon characters at the turn of the century, just after a leap in apiculture innovations that would prime the pump for large-scale honey production.

Humans are no strangers to honey, and researchers believe that honey bees were among the first species Neolithic people domesticated at the dawn of agriculture 9,000 years ago. However, African rock paintings show that the relationship between humans and honey goes back even further, perhaps as far back as the Pliocene epoch. Of course, modern beekeeping, or apiculture, kicked off in 1852 when a Pennsylvania minister and part-time apiarist L. L. Langstroth designed and patented a moveable beehive with features such as vertical, removable panels and safe panels entrances and exits for bees and a separate brooding partition.

Langstroth’s innovation meant that beekeepers would no longer have to destroy a hive to extract the honey. Bees could spend more time and energy producing honey by keeping hives intact than building new ones, increasing yields and kicking off large-scale honey production in earnest, allowing commercial operations to thrive.

In 1902, during a trip hosted by Mississippi governor Andrew Longino, President Roosevelt was the only hunting party member that had not shot a bear. His assistants decided to tie a black bear to a tree and suggested Roosevelt shoot it, but he declined the offer and called it “unsportsmanlike.” Political cartoonist Clifford Berryman’s satirization of the event caught the attention of candy shop owner Morris Michtom. It wasn’t long before he and his wife began producing and selling “Teddy Bears” from his candy shop, kickstarting an enduring and popular toy craze.

But it wasn't just a presidential pardon that brought the teddy bear to prominence. Before being reimagined as a murderous and rampaging abandoned childhood companion in an upcoming horror film, the fictional teddy bear Winnie the Pooh was a beloved children’s book character created by A. A. Milne, debuting in 1924, not long after the creation of the teddy bear. Winnie the Pooh is an affable, somewhat dimwitted fellow and, especially in his Disney form, is quite fond of honey, often seen eating it straight from the jar.

Bears, like humans, love to eat honey and hunt and harvest from wild hives. Unlike people, however, bears will not just chow down on the sweet fruit of bees’ labor but also the bees and larvae working in the hive.

But what about the bottle itself?

There are different origin stories for the bear-shaped honey bottle. In 1951, inventor Edward Rachins of Brookline, Massachusetts, presented several bottle designs, including one that looks similar to the honey bear bottles commonplace today. Other structures Rachins submitted include a seal, a clown, and a penguin. The nightmare fuel clown-head bottle notwithstanding, Rachins’ bottle designs are cute and fun, but when it comes to honey, the bear makes the most sense since seals, penguins, and clowns aren’t generally associated with bears.

Rachins may have been the first to get to the patent office with a fun, bear-shaped bottle design, but honey brand Dutch Gold popularized the concept while turning the business from a side hustle for founders Ralph and Luella Gamber to a major honey player.

After dinner with friends one night in 1957, the Gambers came up with the bear-shaped bottle idea. It was the year after A. A. Milne died, and bears still fascinated the general public, including Winnie the Pooh and Hanna-Barbera’s Yogi Bear. The Gambers told the LA Times they didn’t bother to patent the design, thinking they’d be sued by the rights holders to Winnie the Pooh anyway. The packaging idea took off, as did Dutch Gold, which still sells honey today.

Dutch Gold isn’t the only company that sells its honey in bear-shaped bottles, with stores often stocking several brands that turn to the cute packaging for their bee juice.

Of course, as cute as these honey bear bottles are, they aren’t without some serious flaws. For starters, the viscous, sticky liquid isn’t easy to entirely dispense from a bottle with such as complex shape, inevitably leading to waste. The bottles are also more expensive to produce than more functional designs without faces. Finally, these honey bears get made using plastic. Honey only needs an airtight and moisture-resistant package to be safely packaged, which you can definitely achieve using more sustainable alternatives.

One example of a more sustainable alternative to cute teddy bears made out of plastic is Bee Loop honey. In addition to being zero waste, they use beeswax to create a jar that suitably protects the goods inside. The only other material used to create the pot and lid is the organic linen used for the tear string. Instead of adding a label and creating more waste, a simple logo imprint gets used on the front. The entire packaging is organic and 99% edible, as eating the linen string is inadvisable. While it's unlikely that a beeswax jar can scale up to replace every bear-shaped plastic bottle, Loop could inspire other brands to design and use more sustainable packaging.

The only advantage that the honey bear bottle seems to have is its cuteness. But given the plastic waste crisis and the various suitable substrates available for packaging honey, including organic beeswax, maybe it’s time the plastic honey bear bottles take a permanent hibernation.