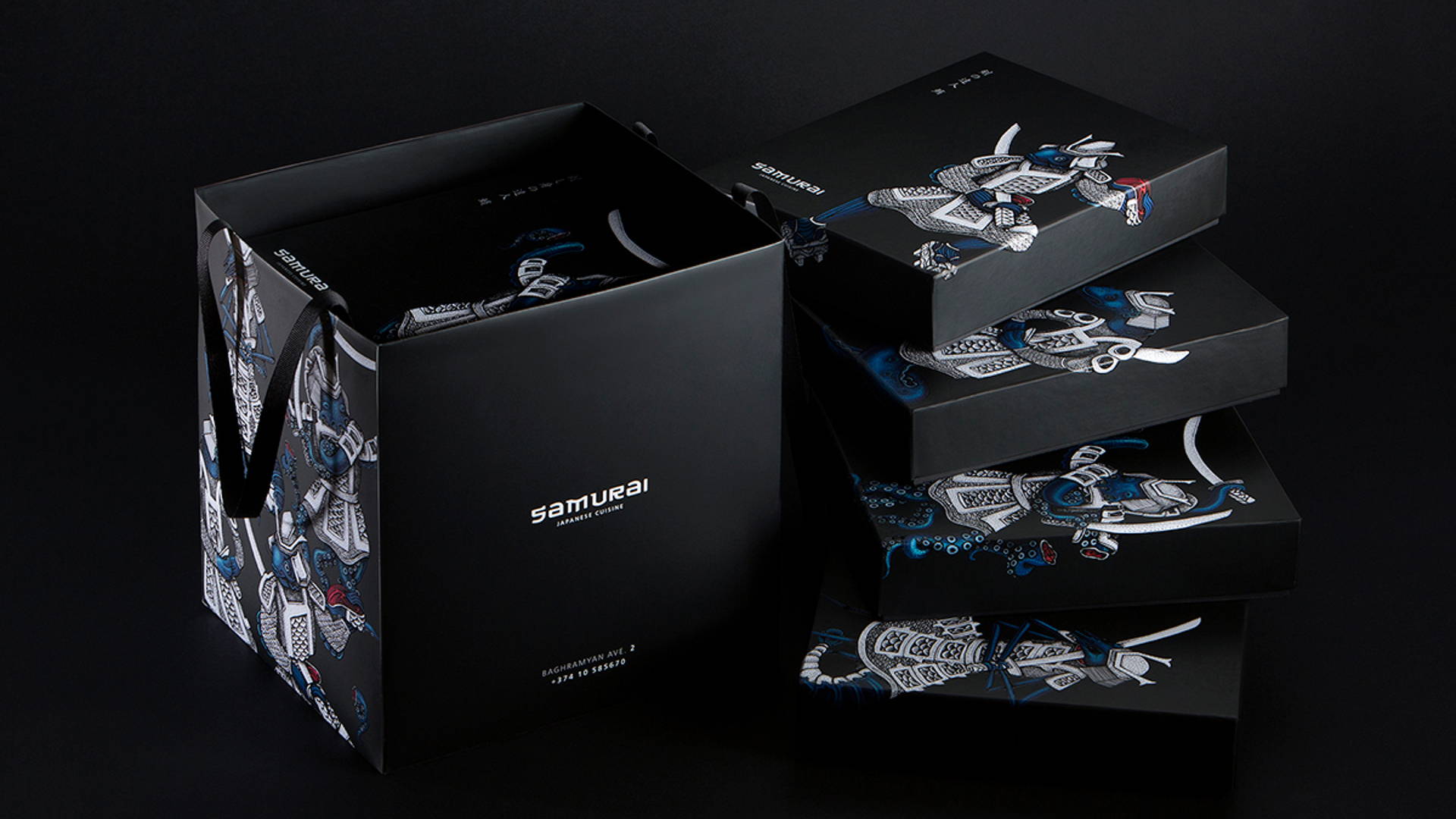 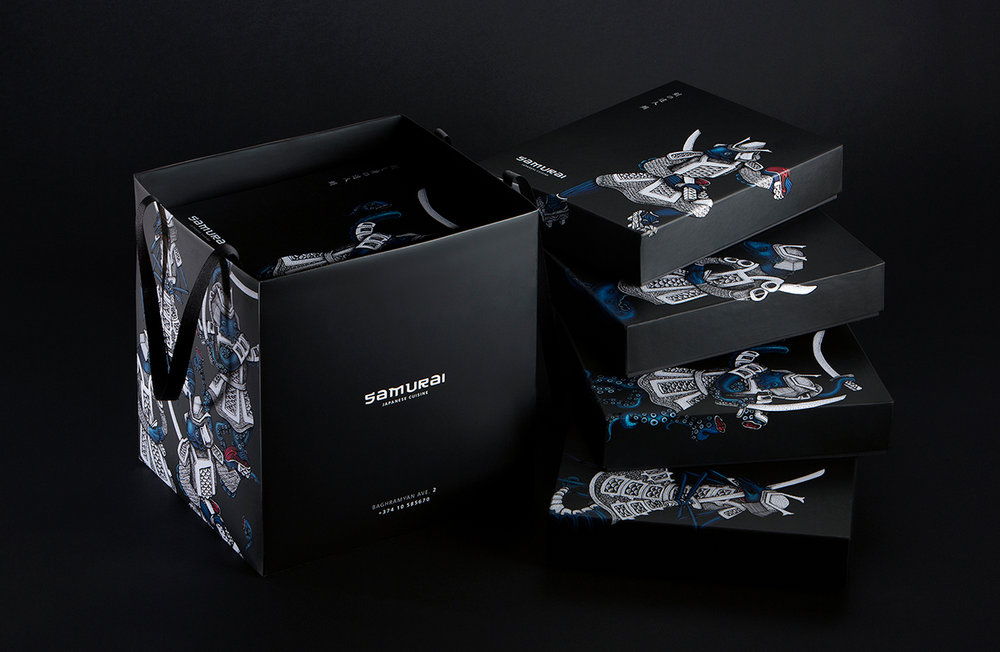 “The branding of Samurai Japanese Cuisine in Yerevan, Armenia, is based on the brand concept of samurai fish characters ready to sacrifice themselves to serve the customers the freshest sushi and other delicious Japanese cuisine. Our objective was to create a new brand identity that would attract new customers, especially young people and opinion leaders who might be shocked by the identity.” 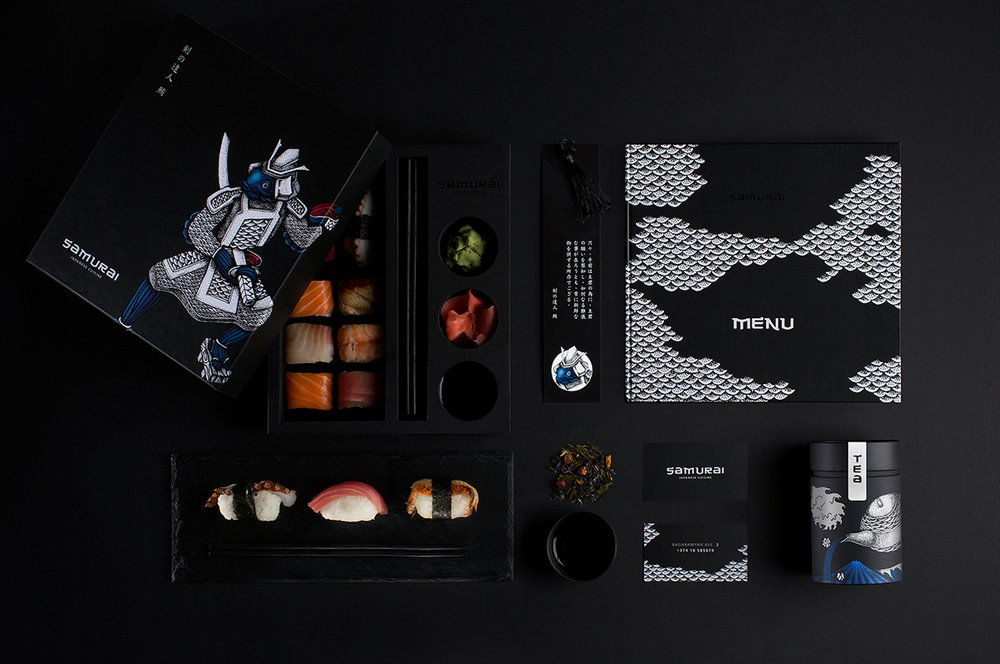 “The team came up with the idea for a samurai fish who commit hara-kiri to satisfy their Emperors, i.e. their customers. This unusual Japanese ritual and the peculiarities of Japanese cuisine inspired the designers to create four characters of self-sacrificing fish; Tuna, Shrimp, Octopus and the Conger.” 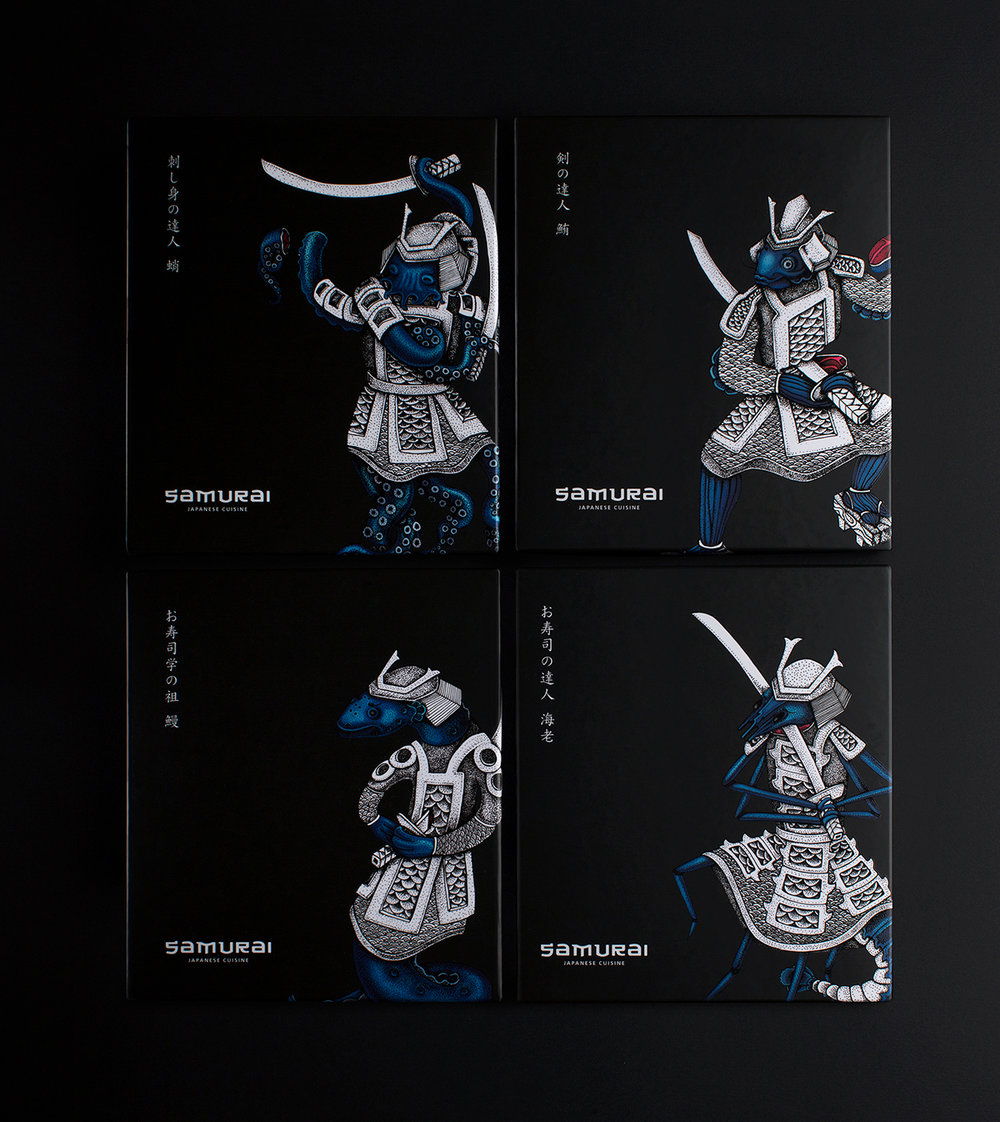 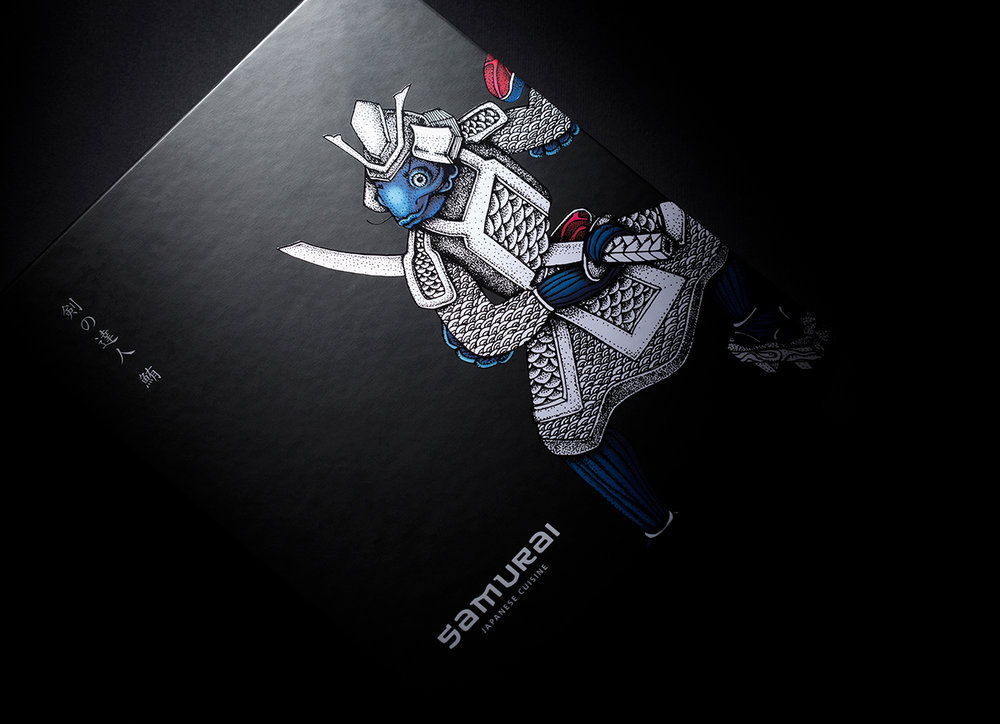 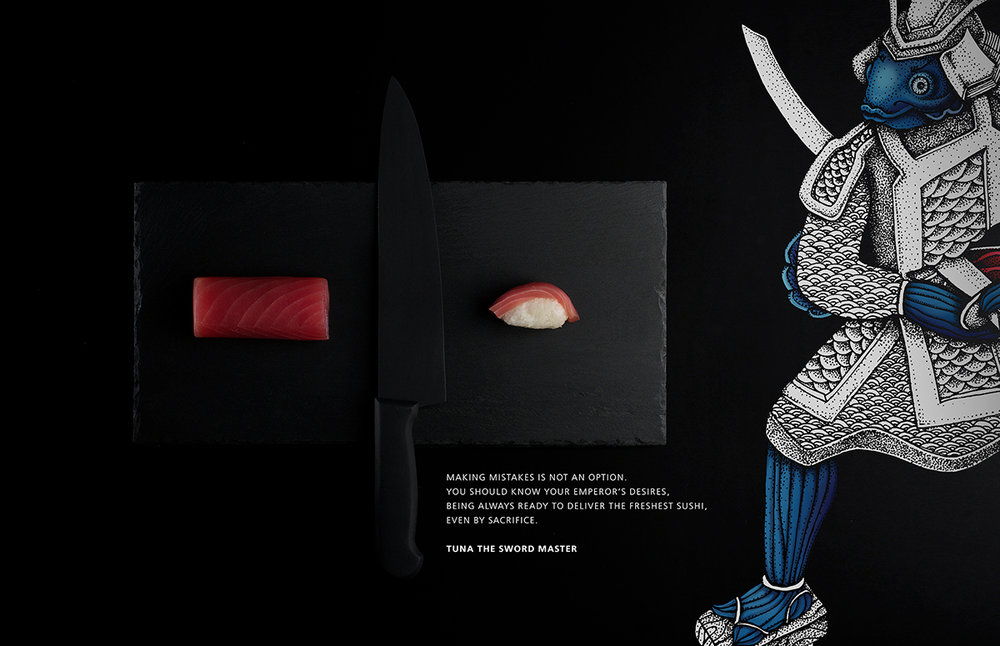 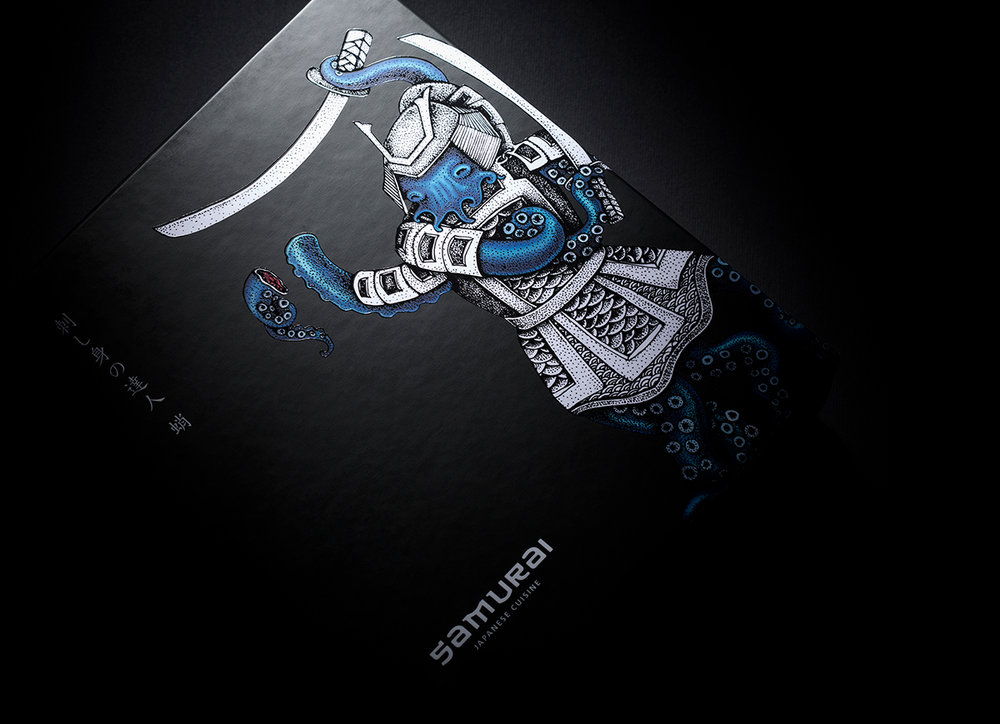 “A simple typographic solution has been given to the logotype of the brand. A Latin font was stylized to create a visual connection with Japanese calligraphy and to pass on a taste of Japan. Blue has been chosen as the dominant color for the brand identity mostly to convey the idea that the fish here is fresh and organic. The dark colors black and grey are to emphasize the premium quality and price aspect of the brand.”

“A hand-drawing technique has been used combined with the digital art for illustrating the original characters of samurai fishes.” 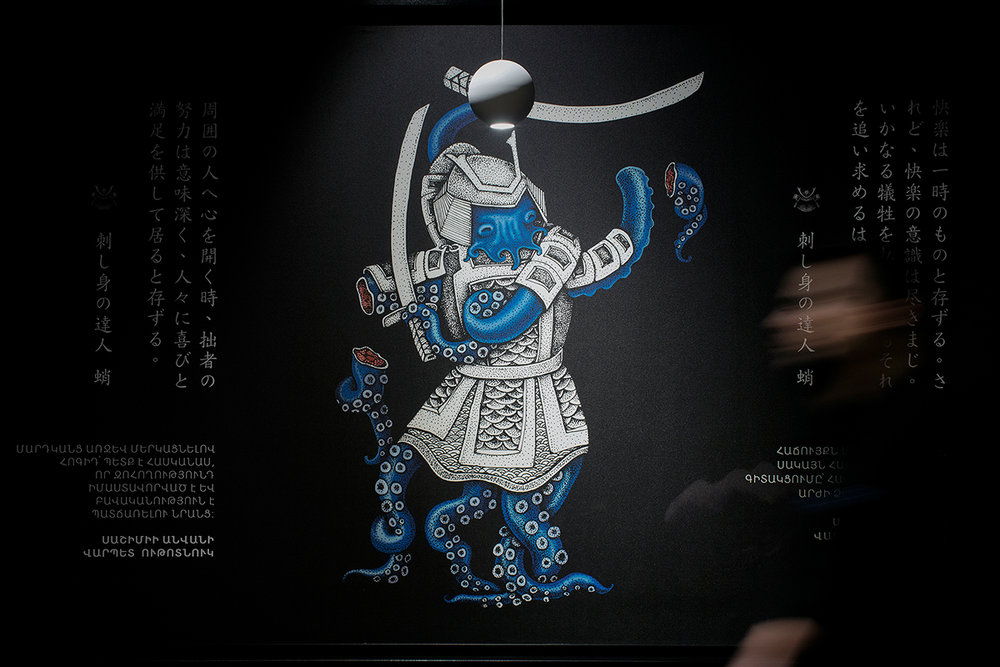 “These philosophical thoughts were also translated into Japanese language and together with the characters’ illustrations found their special spots in the form of canvases on the walls of the restaurant.”

“There is also a tearoom in the Samurai Japanese Cuisine restaurant that is used for tea ceremonies for which the team of designers created a beautiful illustration inspired by the famous print ‘The Great Wave off Kanagawa’ by the Japanese artist Hokusai. The same illustration was used to create a packaging design of tea containers to be placed in the tearoom.” 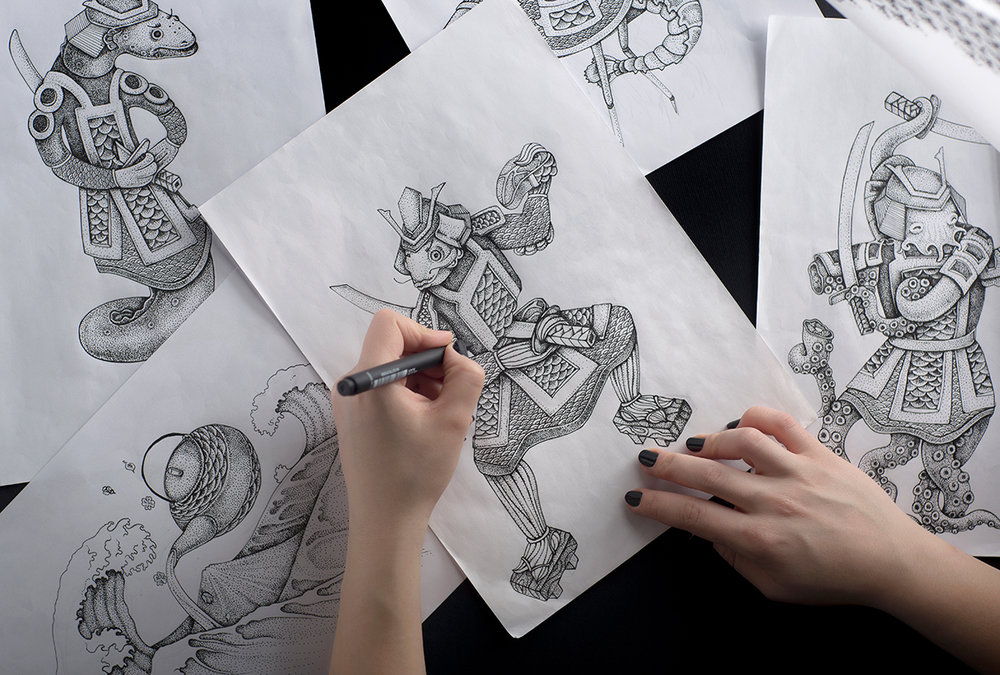 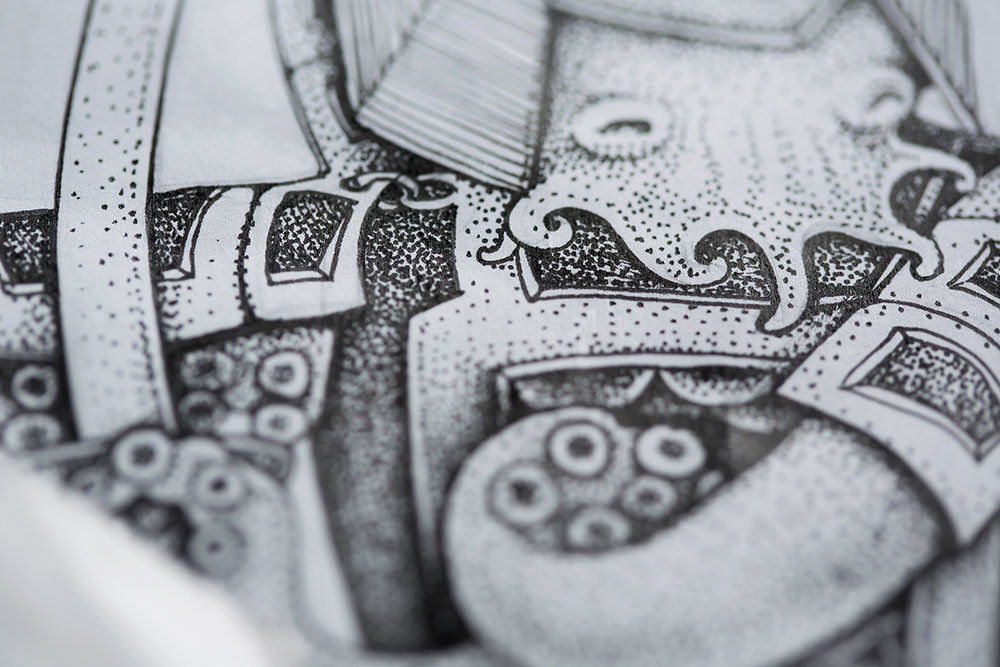 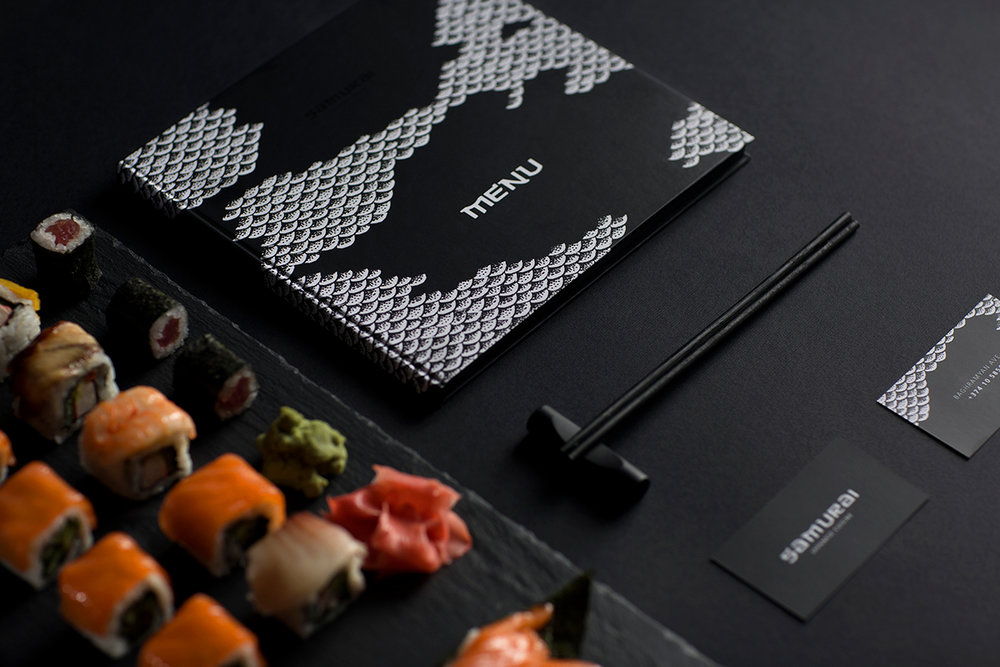 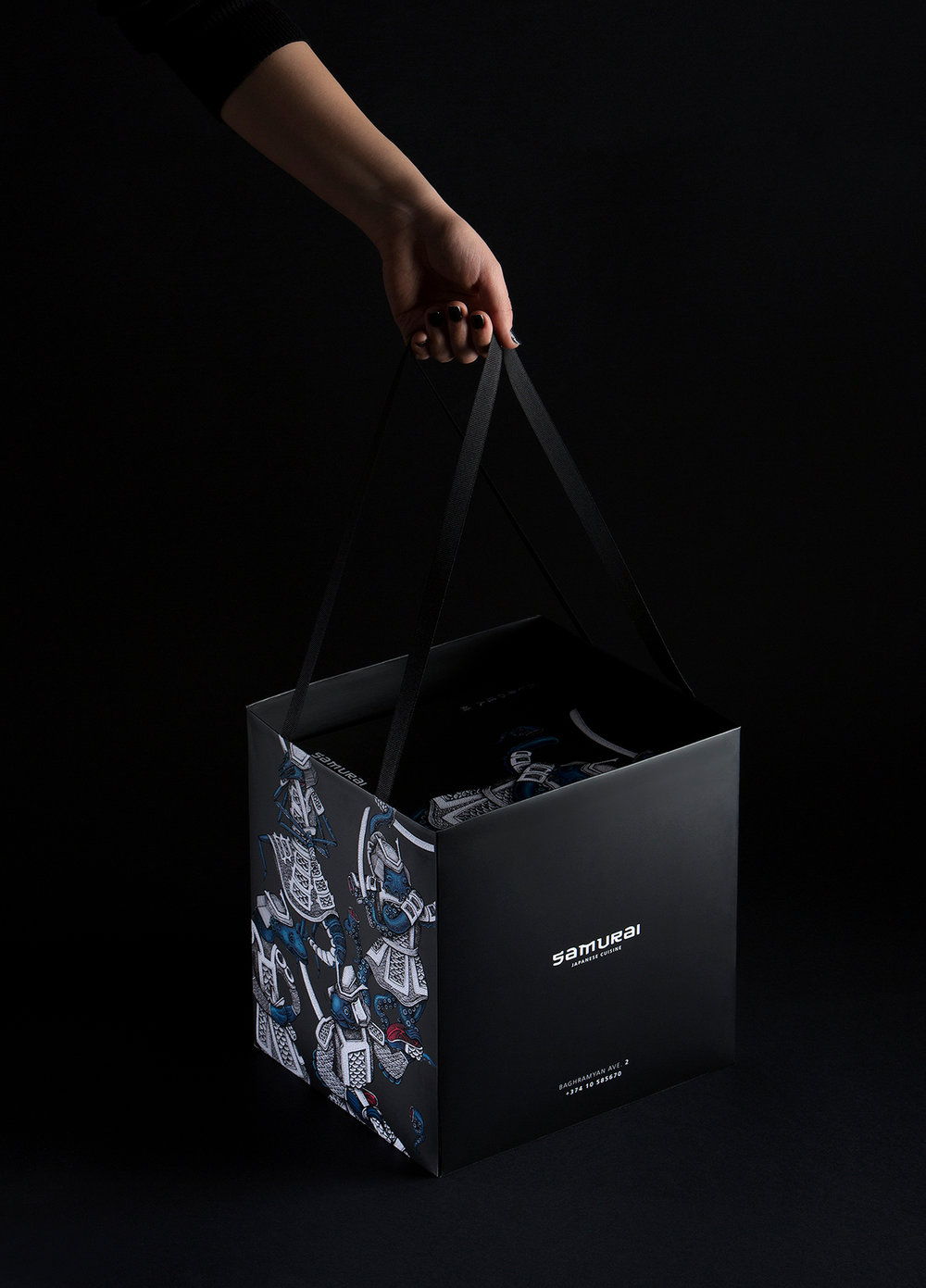 “Being unbelievable fans of sushi, our team knew the importance of impressing customers with unique product packaging. So they designed a special delivery box that contains sushi and rolls, chopsticks, wasabi, gari and soy sauce – a true paradise for sushi lovers. On other printed materials such as the menu or the business card, a fish squama has been used as another design element of the brands visual identity.” 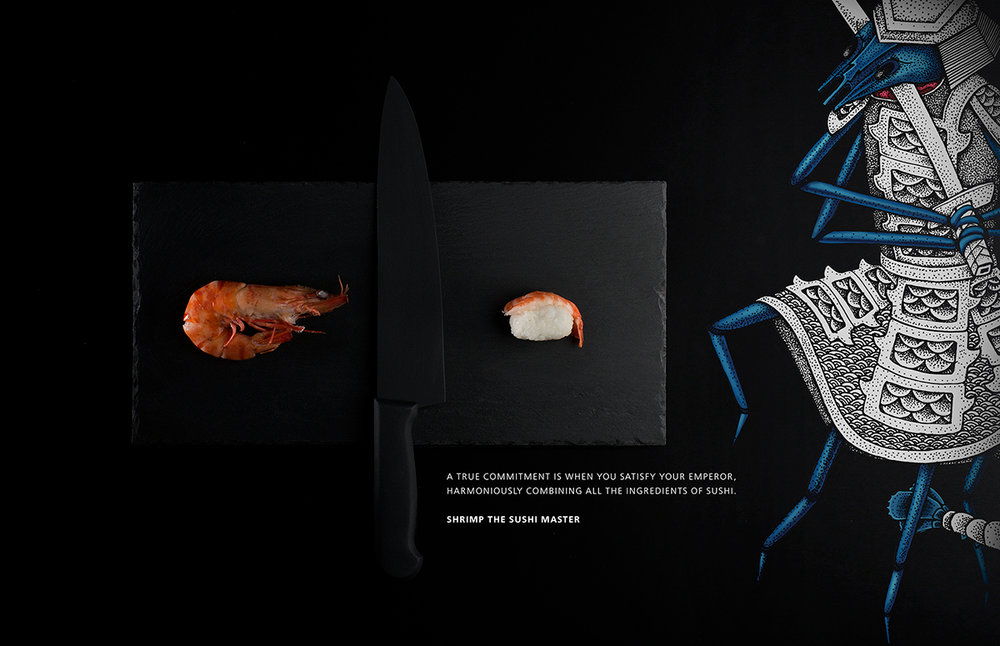 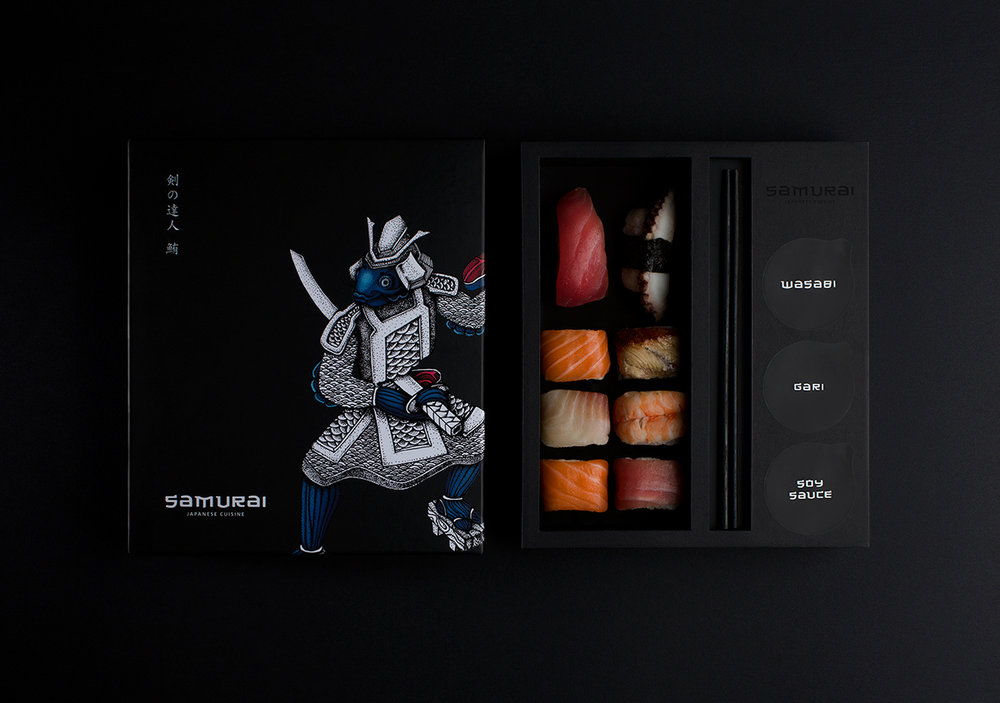 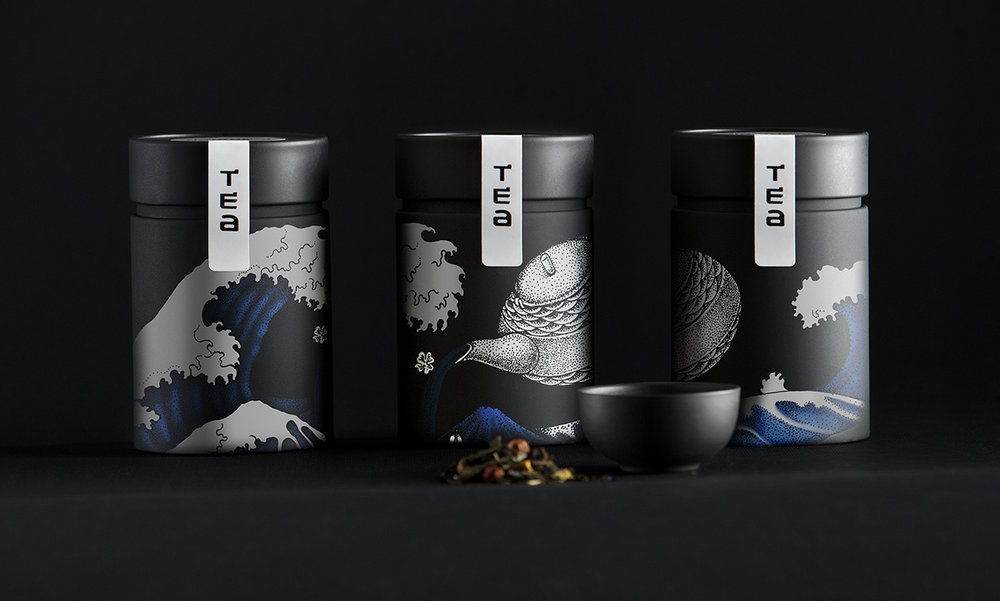 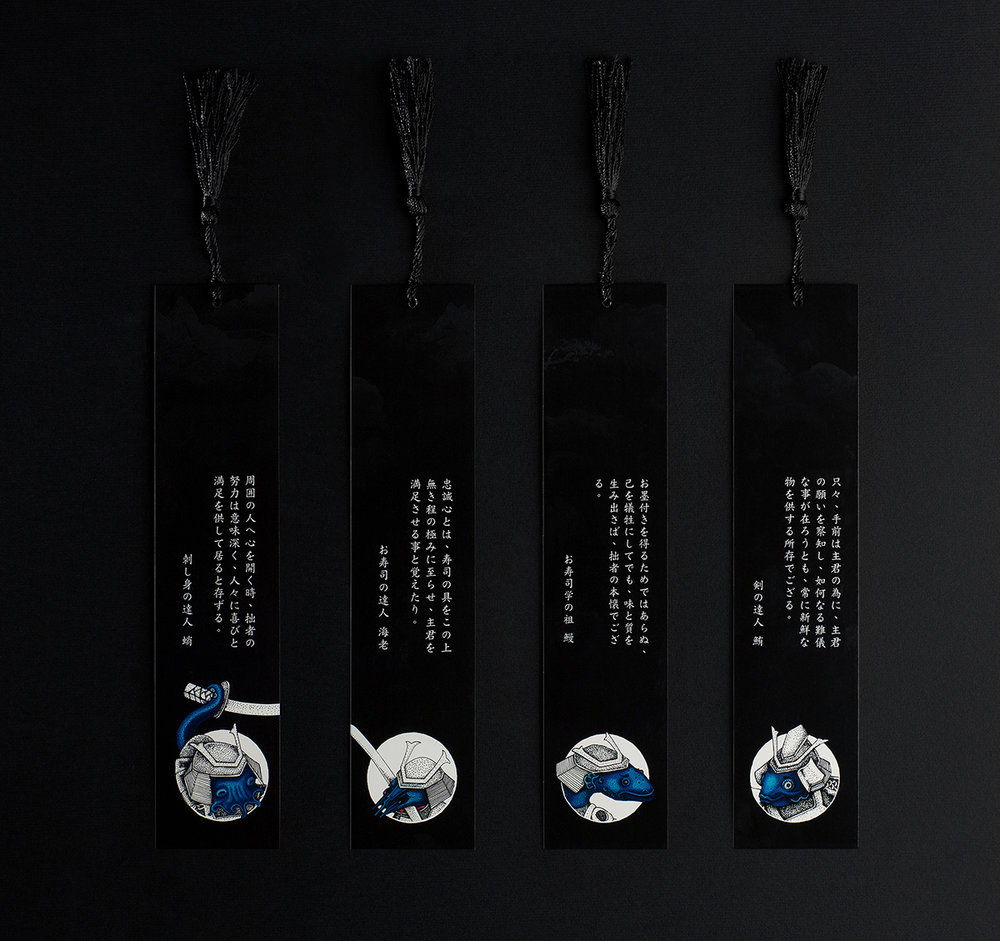 Loyal Customers of Domino's Pizza Are In For a Real Treat

Job of the Week: FutureBrand