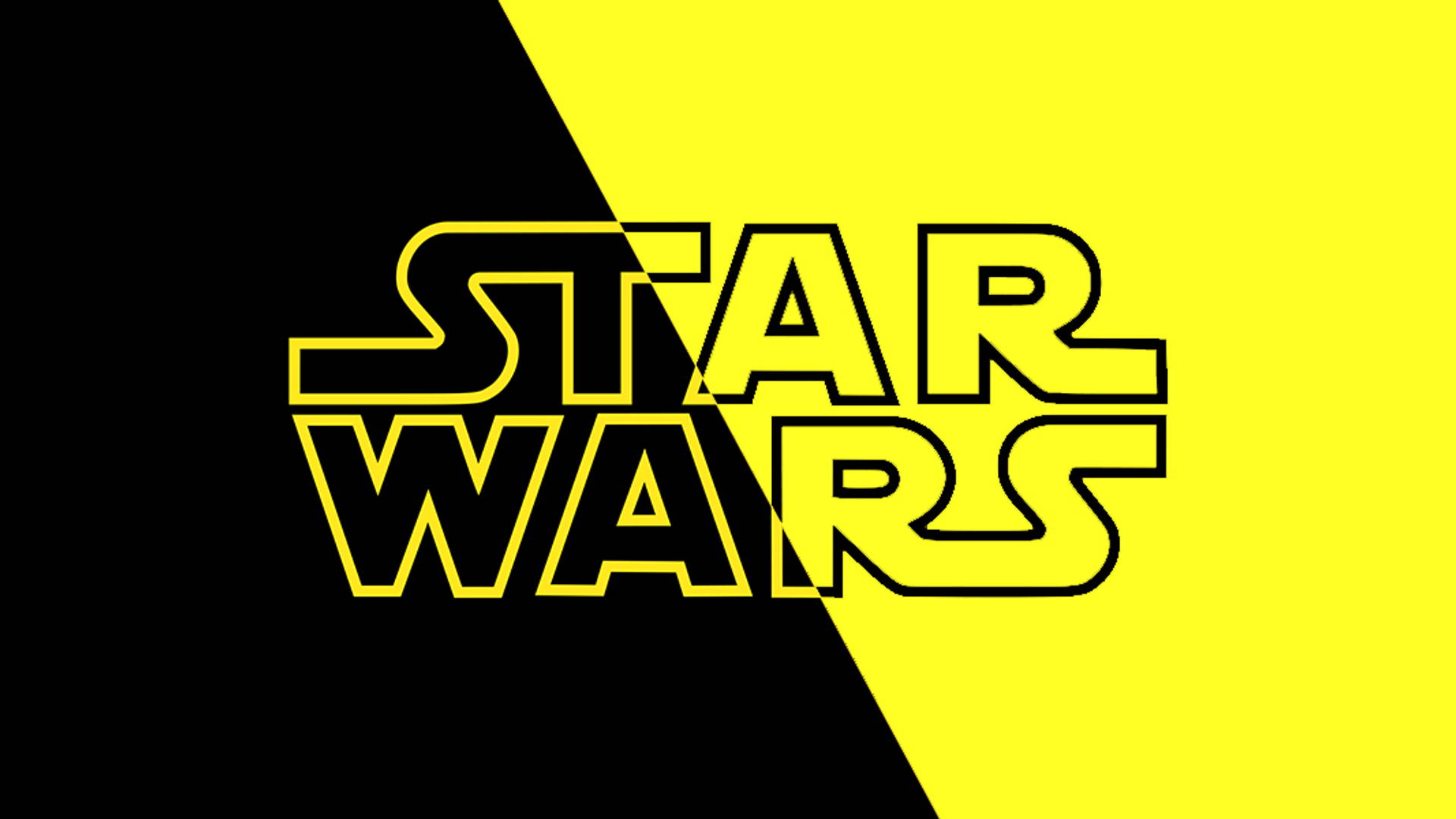 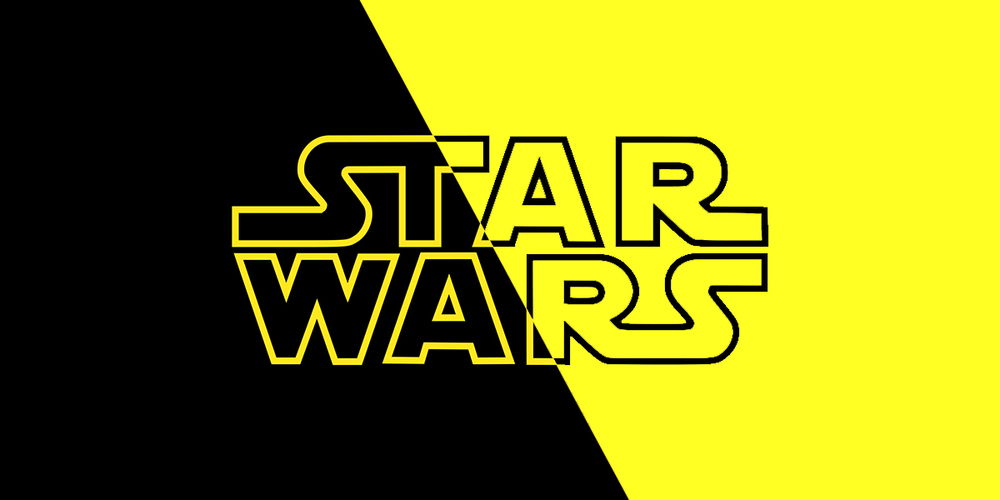 Move over Christmas and make way for Star Wars! Christmas, you might want to adjust your expectations this year. I realize you’re usually the star at the end of December, but this year things are going to look a little different.

This third coming of Star Wars is the biggest yet, and the force behind the Disney marketing machine is strong. Ticket pre-sales zoomed past $50 million a month BEFORE the scheduled December 18th release date and Star Wars memorabilia is out of this world! The partnerships and limited edition collaborations are vast and range from luxury items to utilitarian necessities with ease. There’s a special Star Wars something for everyone. And, that means packaging to this audience, right?

It has come with great effort that I have ventured out into the galaxy to find the most interesting and unique Star Wars themed packaging items, and brought them back to share with our Dieline readers. Move forth, and may the Force be with you. 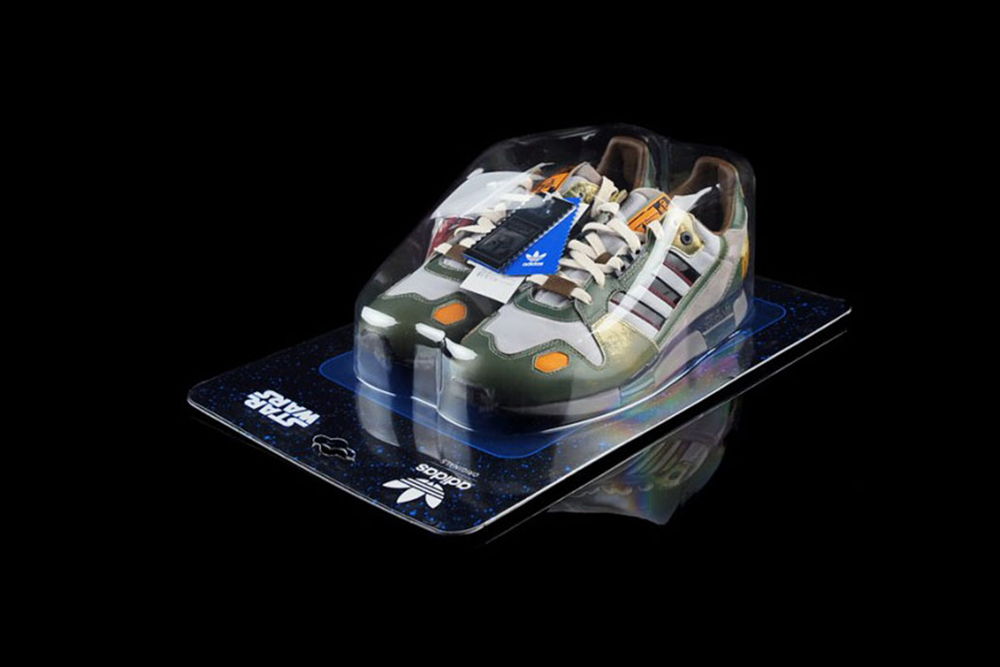 The Adidas brand is one of the most iconic sneaker brands of all time. Cemented onto the map of culture first by hip-hop legends Run D.M.C. and carried through the years by the likes of Missy Elliot and Rita Ora. Next up on the Adidas history map – a limited edition sneaker collaboration with Star Wars.

Star Wars fans hold yourself back for this one,  these shoes are in your control! They are literally customizable from top to bottom. Starting with an Adidas Originals' classic Superstar '80s model, fans can choose from different colors, lace charms, Star Wars fabric graphics, metallic toe shells and custom leather stripes – a galaxy of possibilities. Nothing tickles my fancy more than thinking about making a shiny silver pair of R2D2 toe-shells that would twinkle as I walked down that movie premiere aisle. 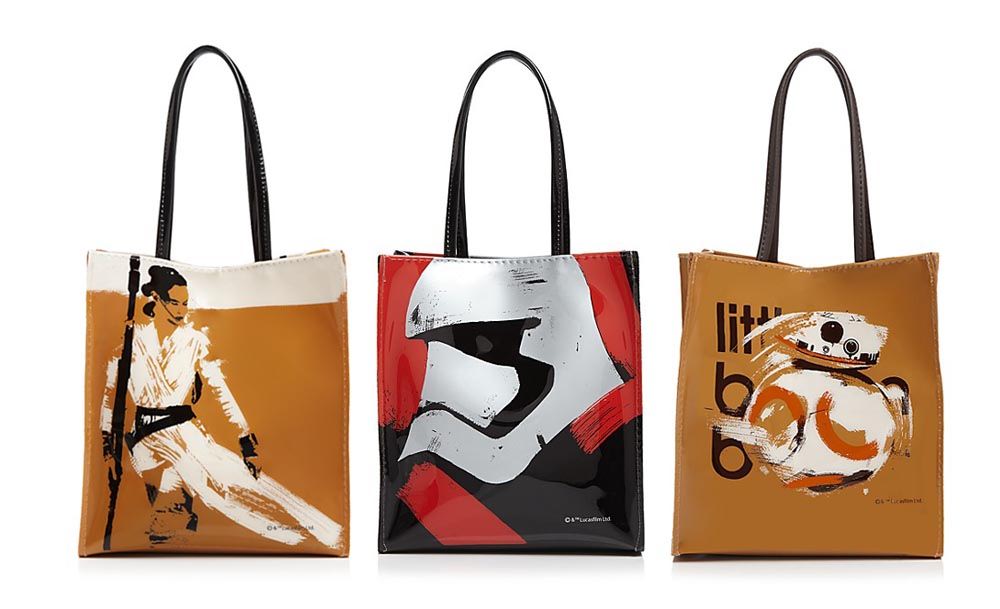 The iconic Bloomingdale's brown bags have been taken over by the “force” which is the Star Wars marketing phenomenon (pun intended). The Limited Edition totes are a part of Bloomingdale’s partnership with Force 4 Fashion, which is an interesting combination of the fashion industry and the Star Wars franchise to raise money for a good cause.

The totes aren’t made out of the usual brown paper bags Bloomie’s hands out to shoppers. Instead, they are durable, reusable and of course, fashionable. The Force Awakens costume designer Michael Kaplan is responsible for the illustration work that graces the front of the bags, featuring three of the Star Wars characters. The art has a rough, textural style to it that is packed with both motion and emotion. If I had to pick one I’d grab the Sphero sack with the much loved “little brown bag” typography injected into the design. 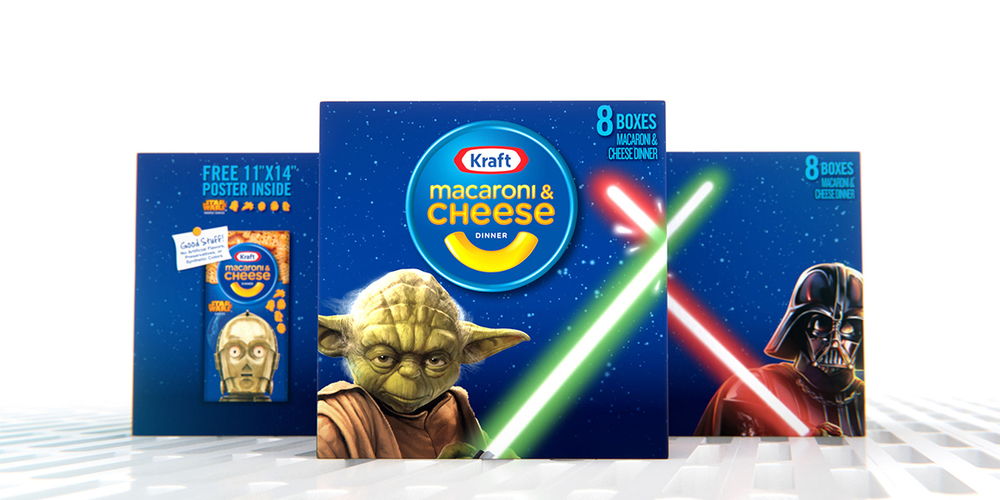 Just in time for the release of the newest Star Wars film, Kraft Macaroni & Cheese has partnered with Disney to bring the Star Wars experience to life in an engaging way within the club environment. Packaging plays a key role in the success of items launched into the club environment, as it is responsible for capturing consumer interest and clearly communicating value and contents within a unique store environment.

The packaging creates an engaging display of the battle between good (Yoda, Kraft Macaroni & Cheese) and evil (Darth Vadar) as the two characters battle with iconic light sabers across the pallet. The design also plays itself out across the primary structure with the design continuing from panel to panel as the box rotates. 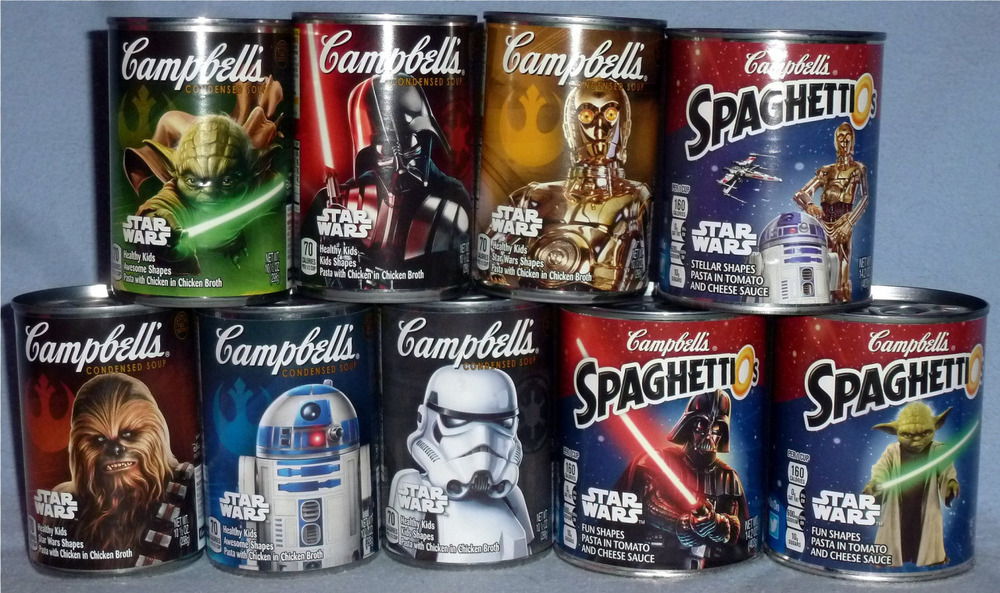 To the diehard fans: time to stock your pantry with Star Wars-themed Campbell's Soup. In honor of the upcoming Star Wars film, this nostalgic brand decided to release limited edition packaging with all the major characters in the film.

The soup cans feature a fuzzy Chewbacca, Yoda holding a green lightsaber, R2-D2 (my favorite one out of the bunch), Darth Vader in his glory, C-3P0 and a finally a Stormtrooper.

Not only has the packaging been altered for this special event but so has the noodle shapes floating inside. Star Wars- shaped noodles have replaced the classic ones, allowing you to stage a battle in your bowl if you want to. 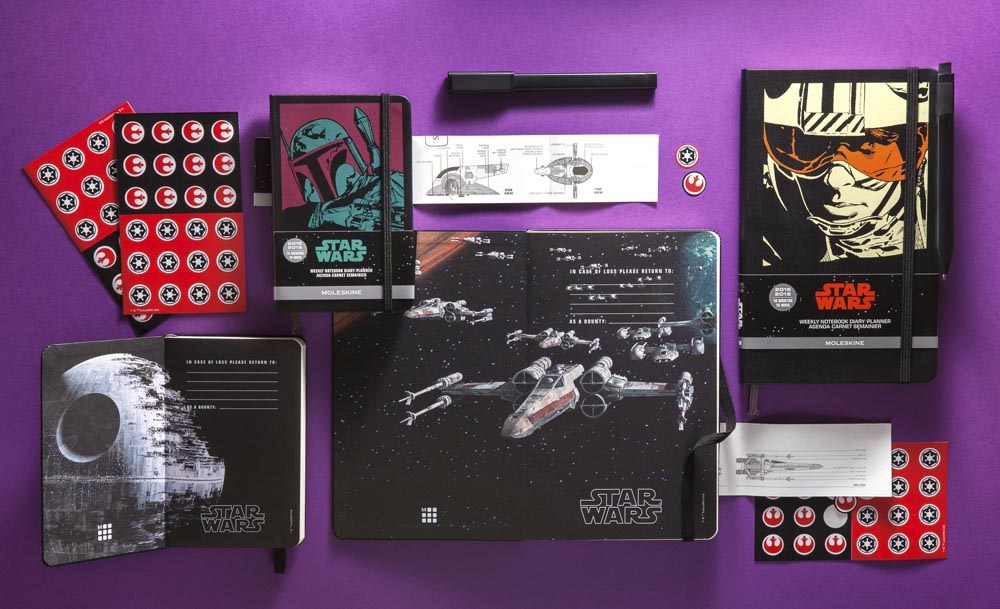 Look what we have here, beautiful Star Wars-ized versions of the creative community’s favorite notebooks. Moleskine has launched a Star Wars Limited Edition Line of notebooks and planners that really go all out. These editions might thrill the Star Wars collector communities as much as the art world.

All the usual, well loved Moleskine features are there: acid-free paper, elastic closure, sewn binding and the cloth ribbon placeholder. But the Star Wars Collection takes things to another level (or should I say galaxy?). The six planners have been silkscreen printed with one of six different characters on the cover, each using a 2 color palette. Inside each is a variety of Star Wars bundled goodies which range from themed stickers to images of Star Wars ship blue prints. Yes, that rear expandable pocket is still there, but you might overlook it as you gaze at the beautiful color montages of film images. So many details, so much to look at, so much Star Wars AND Moleskine love in one package.

Oh, bring it on for the female Star Wars fans! Cover Girls has jumped on the Star Wars train and launched a limited edition makeup line inspired by the highly anticipated latest Star Wars release, The Force Awakens. And, they're asking us ladies to pick sides - Are you on the light side—or the dark side?

Cover Girl’s global creative design director, make up artist Pat Mc Grath is responsible for the shimmery metallic palette of colors, which are divided into lights and darks (of course!). A range of lipsticks, nail polishes and mascaras all wrapped up in sleek black packaging featuring classic Star Wars quotes from the movies throughout the years. “Indeed You Are Powerful” takes on a whole new meaning as we cover our lips in C-3PO gold and boldly step out into the world. 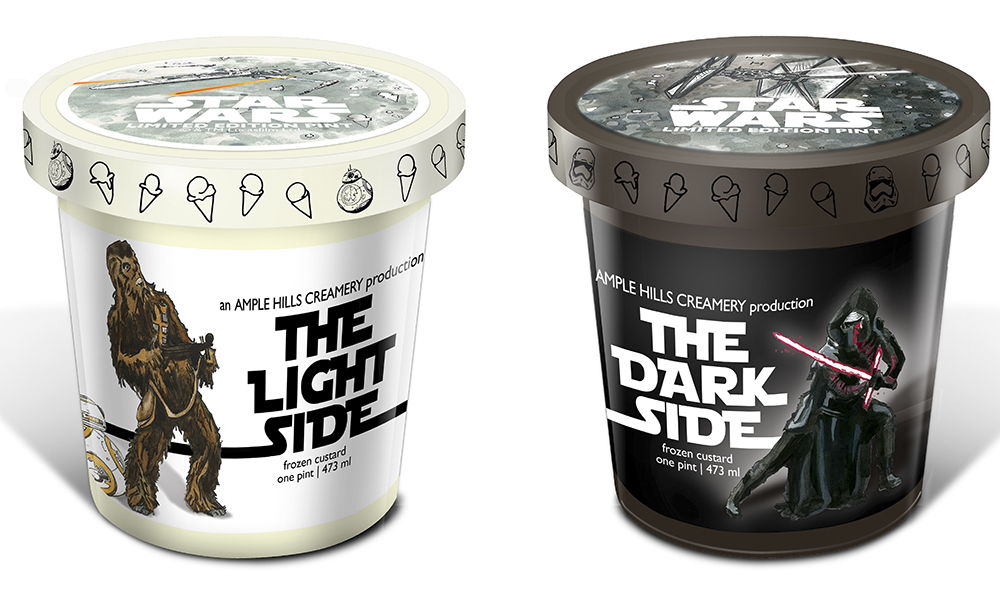 It looks like this galaxy just got a lot sweeter! Can you believe that someone out there has created limited edition Star Wars ice cream flavors? We can thank Brooklyn’s Ample Hills Creamery for this indulgence. There are two flavors to choose from (of course!) – “The Light Side,” a marshmallow ice cream with chunks of crispy treats, and “The Dark Side,” a dark chocolate ice cream with espresso fudge brownies. Hard decision, I know.

The ice cream comes packed in collectible containers featuring original artwork of the Star Wars characters, created by Ample Hills Creamery’s Art Director, Lauren Kaelin. The illustrated characters stand there boldly, in action and ready for battle. Running around the lid of each pint is a playful ice cream cone pattern that lightens the mood and reminds us that this is just ice cream after all. We are free to indulge our inner Darth Vader without judgment. It seems to me, this Ample Hills Creamery production is going to be a blockbuster! 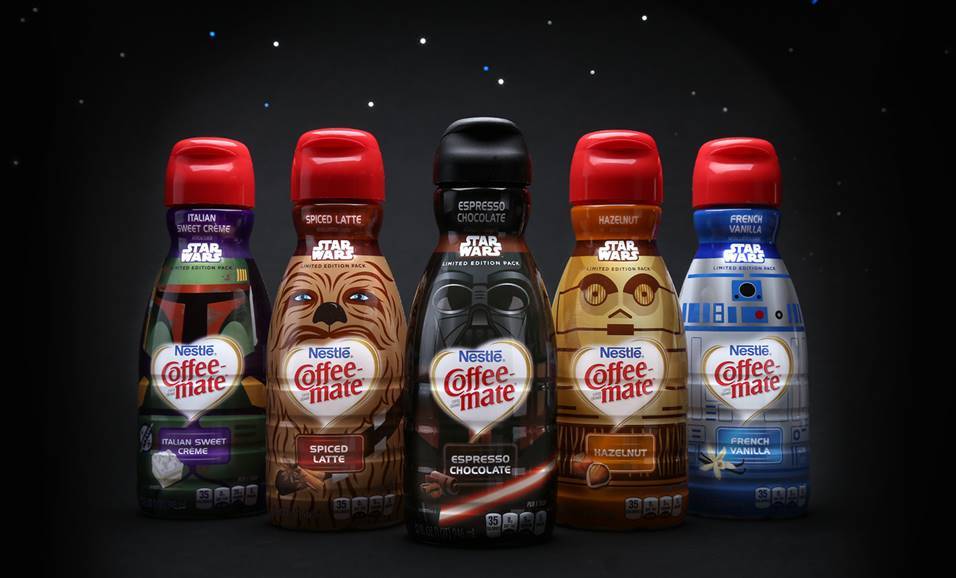 Yes that’s right, Coffee-mate has released a limited edition line of Star Wars themed flavored creamers in the excitement leading up to the release of The Force Awakens. The line includes five characters representing five different cream flavors and come delivered in containers that look like the characters. The packaging shape  hasn’t deviated from the standard Coffee-mate bottle size. Instead the bottles have simply been wrapped in plastic Star Wars graphics. Some of the flavor matches make sense, Darth Vadar as Espressso Chocolate, R2D2 as French Vanilla, but I’m not sure Chewbacca makes me think of Spiced Latte.

Pouring a bit of C3PO Hazelnut Coffee-mate into your morning coffee is a playful concept. However, holding on to and collecting used plastic coffee creamer bottles in the name of your love for Star Wars is just too much. 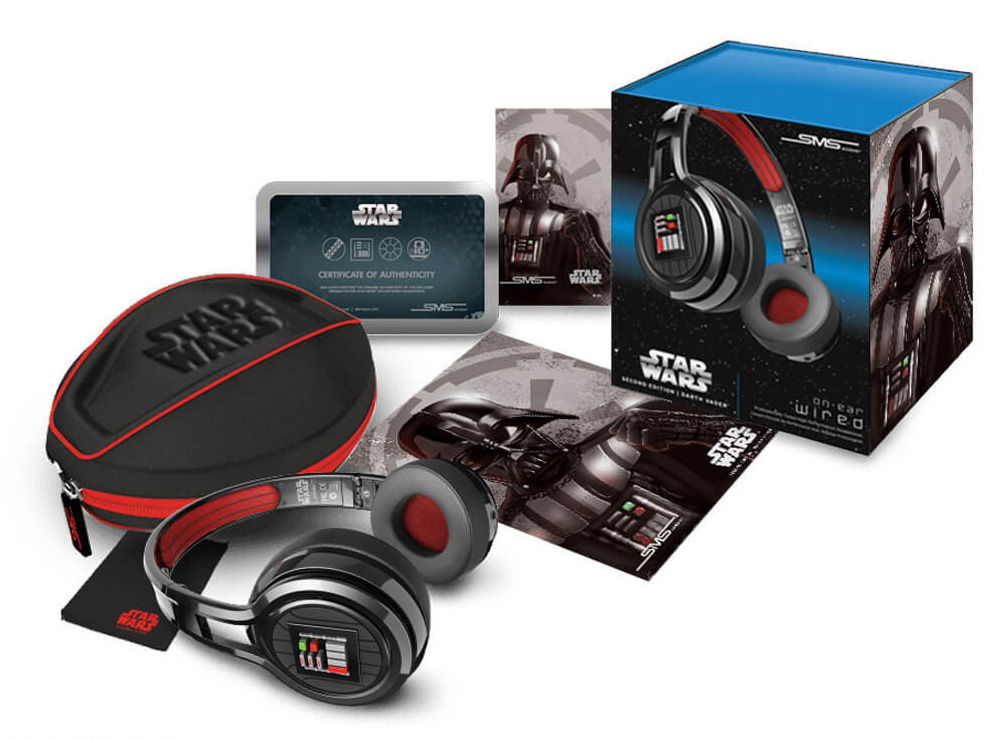 The Force of Music has never sounded so good. SMS Audio has released a line of Star Wars edition of over-ear headphones that would look mighty good under the Christmas tree for one special fan!

Choose from R2-D2, Chewbacca, Tie Fighter and Darth Vader – or if you’re a collector you might want to grab all four! Each set comes packed in a square cardboard box, emblazoned with character artwork and oversized images of the headphones. In addition to the character headphones, inside each box you will find an embossed Star Wars carrying case, a 5”x7” poster, stickers and a certificate of authenticity.  While I can’t speak to their audio quality, these guys look pretty amazing. Another Star Wars collaboration that’s gone right. 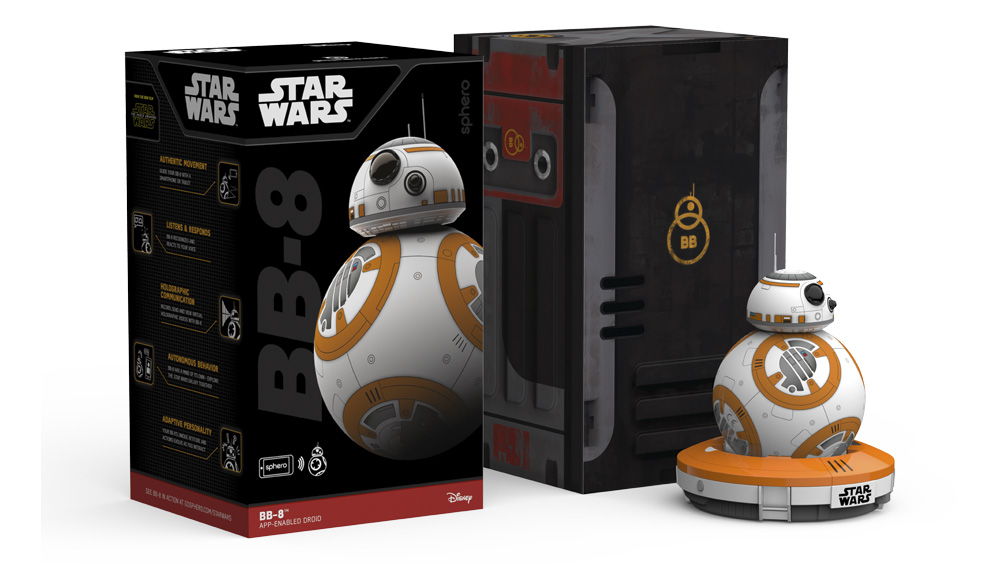 The buzz around town is that BB-8 is the breakout star in the upcoming “The Force Awakens.” Fans saw this new character, a super fast rolling robot, in the first trailer that was released late last year and excitement has been building up since.

The BB-8 App-Enabled Droid from Sphero was launched onto the market before the release of The Force Awakens. It’s a pretty fanatastic “toy” for kids of all ages and attention was paid to the details with its packaging design. You can head over to You Tube and watch videos of fans unpacking their BB-8 Droids step-by-step for a full show.

The design work carries through the traditional Star Wars theme, showing  back galaxies juxtaposed with oversized white typography. Sparingly used, but powerful in presentation is the bright red color that wraps around the base of the package. The box has been finished with a matte soft-touch laminate that adds a tactile element to the experience and emphasizes the toy’s premium status. For all you collectors, make sure you that you unpack slowly and with great care, the packaging for this product is a special part of the experience. 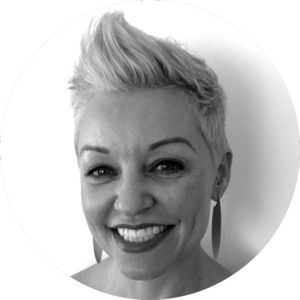 Jenifer Tracy is the owner and Creative Director of JENCO CREATIVE, a boutique graphic design studio founded in 2007 in sunny Los Angeles. Jenifer’s work has been recognized as smart, effective and inspired and has won multiple awards. Having worked with a diverse range of clients from theGot MILK campaign to Mary J. Blige, Jenifer has a relentless desire to create quality work that expresses her client’s personality and vision.

On a personal note, Jenifer splits her time between Los Angeles and London, is a French Bulldog enthusiast and a “cute shit” collector. As a designer with a deep love for pretty packaging, Jenifer is thrilled to be blogging for The Dieline, a site she’s been a fan of for years. Jenifer spends her spare time dog walking her frenchie Pippin, getting her nails done and napping. She’s also known for being a big loud talker and laughing a lot.