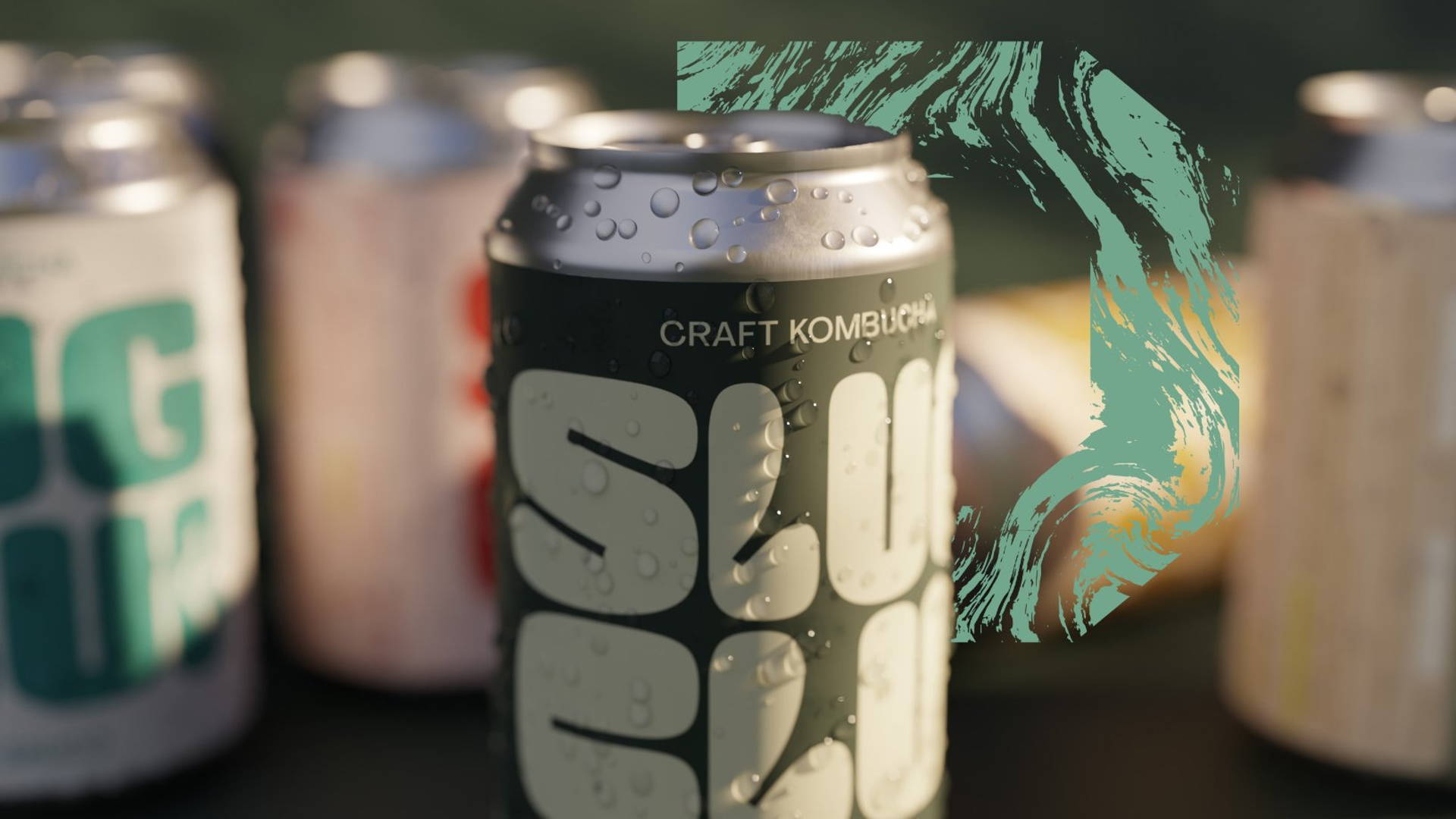 Pack of the Month: Kombucha Brand Slug Club Dives Deep Into Its Namesake For Inspiration

There's a lot of kombucha in this world. And plenty of brands will throw out loaded terms like "artisanal," "organic," "craft," and the always murky "sustainable" when announcing their wares.

Sometimes, the best way to cut through the crowded clutter is to just look better than everyone else on the shelf. Slug Club clearly got the memo.

The Argentinian brand is still trying to find its footing in South American markets, and the kombucha brand wanted to refresh its packaging and identity. So they turned to The Collected Works for a flexible, custom wordmark (that also retains elements of the original illustration used by Slug Club's founders). The result is a lively, joyful brand world waiting to get scooped up by consumers. Plus, who doesn't love anything slug-inspired?

We spoke with the agency The Collected Works and got the lowdown on Slug Club's beautiful branding, ink traps, and helping to bring kombucha to South American shoppers.

Tell me a little about your studio.

Jose Fresneda and Justin Colt started The Collected Works in 2013 after meeting at The School of Visual Arts. Since the beginning, the studio’s guiding principle has been about doing “rad work for rad people,” which for us is usually in the music, technology, and art world. Much of our work is on branding and identity systems, and more recently, we’ve been delving more into product and packaging design. A project like this was a natural fit—making kombucha itself is an art, and the people behind it are rad.

We always start identity projects (which this, at its core, really was) with a round of research. We looked at what independent Argentinian brewers in the beer space were presenting, some modern takes from the local food scene, and took stock of what they might be sharing shelf space with.

Moodboards are a critical aspect of this phase, too. We think of it as inviting a client to the studio (even if this happens digitally most of the time these days), and we’ve got a ton of inspiration pinned up on the wall. It’s a great conversation starter and allows us to see their reactions to different aesthetics. We looked at more-DIY, rebellious, and youthful pieces with hand-drawn elements and analog textures. On the other end of the spectrum, we got a vibe check on more technical, grid-based, and even futuristic styles. And we took a sluggy note and absorbed the outrageously vivid color and patterns of actual sea slugs. They’re wild!

When we started developing the custom type, we were drawing pretty heavily from slug forms, with big globby indents in the ink traps and a sprinkling of antennae. It felt a bit tacky at first. As we refined those features and became more confident in how the brand expressed itself in motion, it started to become something new—in a good way. A few iterations and lots of mockups later, we landed with what you see here—and what’s now on shelves in Patagonia.

What was one of the biggest goals you set out to achieve with Slug Club packaging, and how did you accomplish it?

Kombucha has become very popular in the US over the last decade—you can find it in every corner store and massive grocery chain. That’s not really the case in Argentina. Eugenia Ripari saw a huge opportunity to introduce the beverage just as it was becoming legal to sell there and began brewing in 2020. When she first reached out to us, we loved what she had done with the brand—her cans were adorned with a big, fat felt-marker writing and a hand-drawn slug. Our first thought was, “They don’t need our help—we’d buy this!”

But the situation in Argentina is very different. Many people don’t even know what kombucha is yet. They needed something that felt more approachable, clean, refined, but still weird and eye-catching. She told us, “The biggest problem—that we’re excited about—is that we need to get people to crack a can. They say ‘kombucha, what is it?’” It needed to feel less like something your cousin might have been brewing for a weekend experiment and something that was here to stay, with a visual system that could be flexible and expand as needed.

For Eugenia, who’s located in Río Negro at the northern edge of Patagonia, it isn’t simple or cheap to produce kombucha. Equipment costs are costly as almost everything has to come from Buenos Aires, so shipping is expensive, and logistics can be tricky. So they really wanted to position Slug Club as a mid-to-higher-end brand that would appeal to travelers, tourists, and people that want to bring a healthy and refreshing beverage with them while hiking or rock climbing. And they leaned into the advantages of their location, highlighting local flavors of Patagonia, like rosehip, machi, and elderflower. In her very traditional region, there’s nothing like Whole Foods, so being in local cafes with eye-popping visuals was crucial. “We really want to create a sense of place and community with the product,” she told us. So we tried to lean into that with the design system.

Typography is the clear star of the show here—what led you to go with something so type heavy?

We’re big on typography here, so even some of our earliest design directions included huge type front and center. We presented a range of initial design directions—some early options were digital (almost ASCII-art), some very refined with clean sans serif headlines, and some really leaned into the slug aspect. But one direction caught their eye, a custom wordmark with really interesting ink traps sitting next to crisp, utilitarian type. They talked to each other nicely, a hand-touched element front and center, supported by a crisp and refined foundation. Eventually, we settled on Agrandir by Pangram Pangram as the perfect typeface. It’s super legible but with enough subtle quirks to feel eccentric on closer inspection.

We’ve become very interested in variable-width fonts, and this felt like an ideal opportunity to make one ourselves. After some refinements, we developed a system where each letterform could stretch and squish, aspects of each subtly adjusting. It’s totally dynamic—they could do variations of the wordmark for each flavor. We also developed a custom tool so they could generate as many as they wanted.

Considering your audience is one of the most important factors in designing anything, and in this case, it was how do you introduce people to something that they’ve never heard of before? How do you get them to pick something off the shelf that they’d want to drink? We presented several different directions to take this—some more cute and playful, some technical-feeling, others a bit subdued. We think we hit the right balance in the end—something that doesn’t look like anything else on the shelf but is still approachable and bold. The color palette is crisp, and just a bit different. The huge variable-width wordmark holds enough visual interest to keep you looking from can to can. Then you look them up on social media and see the whole system, the wordmark in motion, and all the swag, and it really comes together.

We’re going to need to travel to Argentina to get our hands on the actual finished product because shipping is way too expensive.

Images from The Collected Works.