This past Halloween, I found myself in a predicament I frequently wind up in— I didn’t have a costume. It’s not that I dislike Halloween, I love it. But when you have two small daughters, and you’re knee-deep in work, time isn’t exactly on your side.

My wife went as Angelica Huston’s character from The Witches while my youngest daughter wore a crinoline dress and my oldest dressed like a fashionable, goth witch. Desperate to appear like I wasn’t phoning it in for another year (I was), I put on some Taco Bell swag I had recently acquired—a large, branded taco hat and a sweatshirt featuring their logo from the mid-90s. I would be the Taco Bell Superfan, because why not? 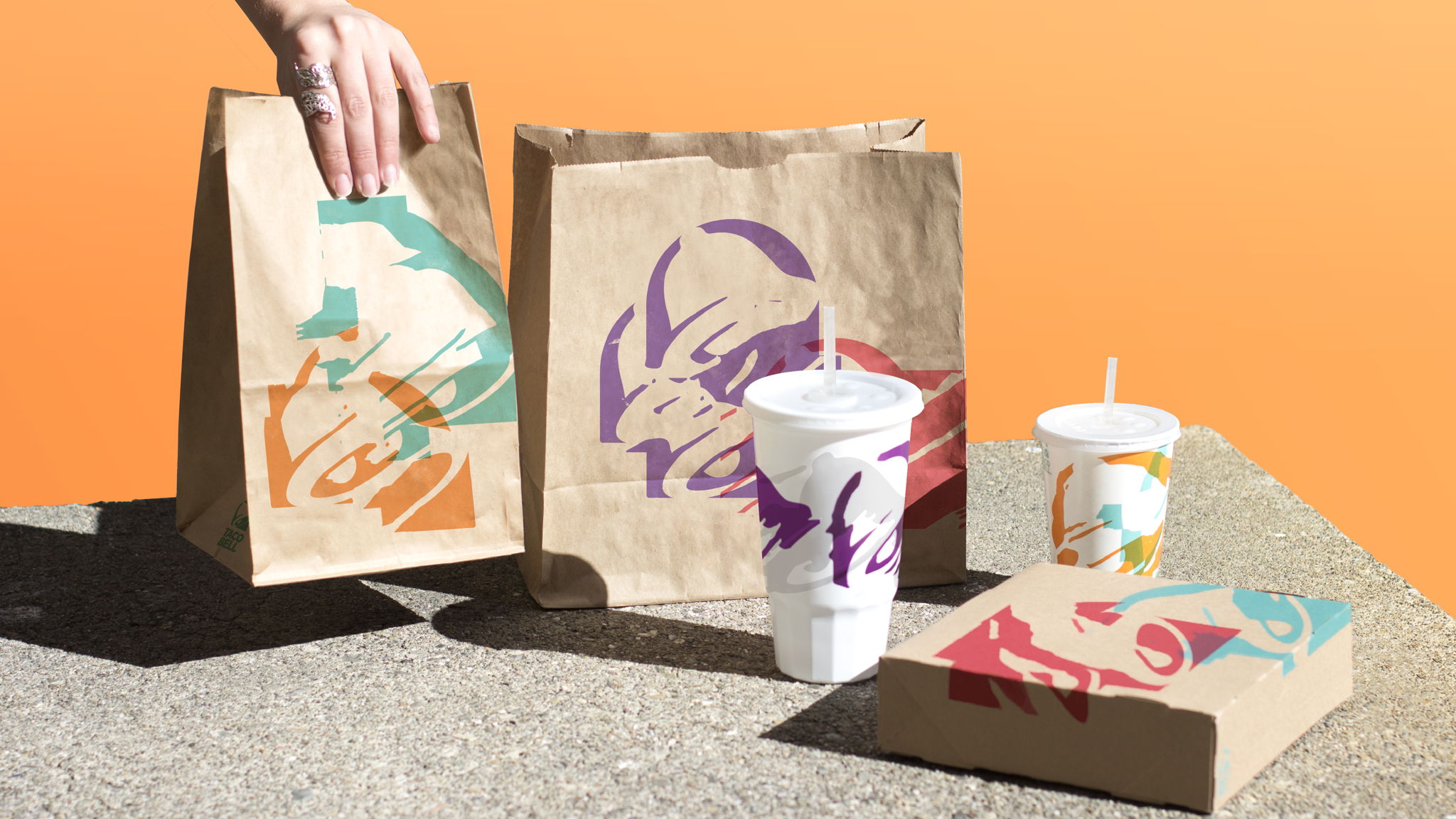 But what surprised me happened when we took the girls trick or treating. There wasn’t any of the normal praise about how adorable our daughters were or the attention to detail in their costumes. Instead, we were greeted by parents and children shouting their love for TACO BELL at me.

Amongst my family, I won Halloween, and all it took was a taco hat.

Why? Because Taco Bell is a force that gives people meaning. 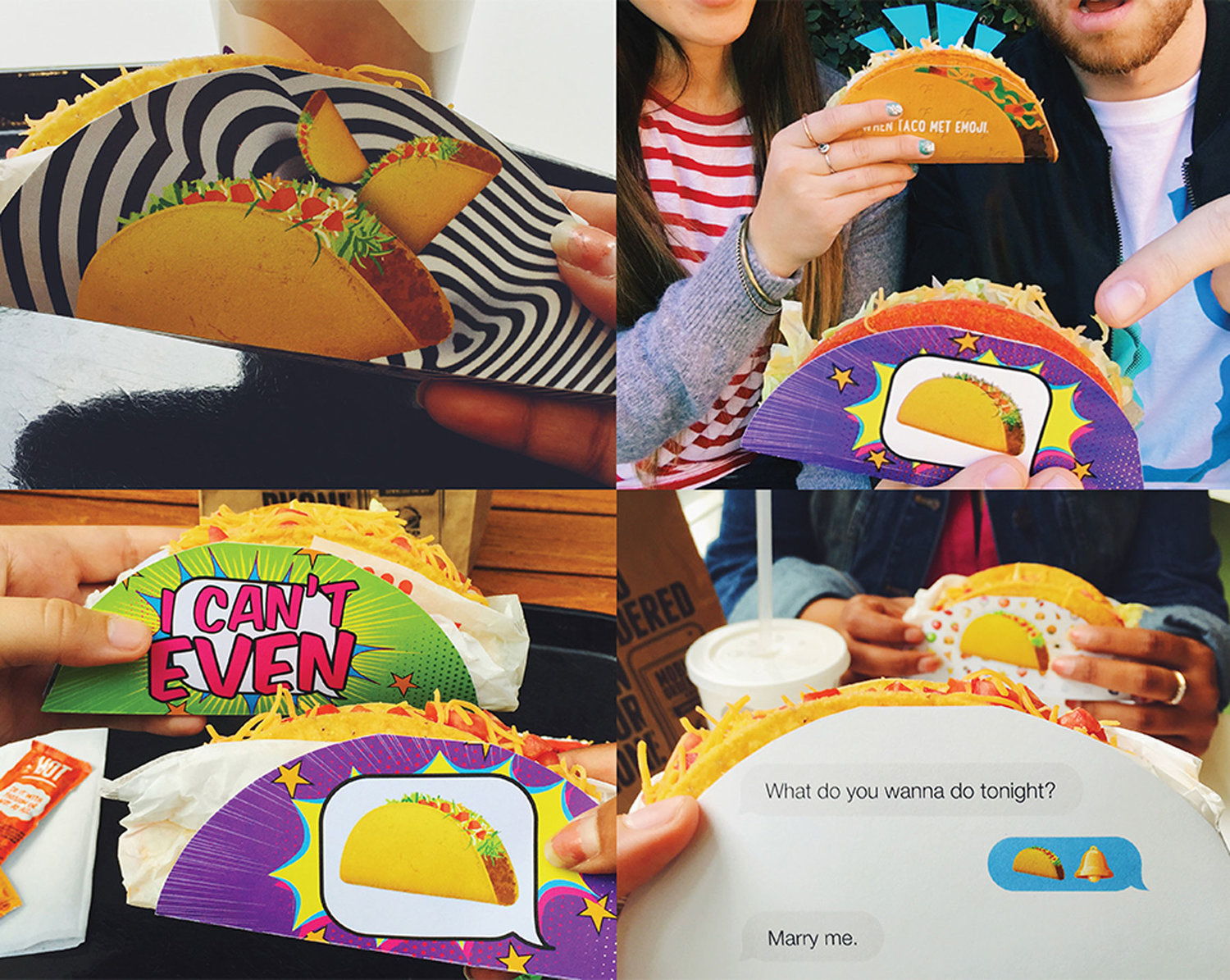 For a brand that Lives Más to the fullest, visiting their corporate headquarters tucked away in Irvine can feel beguiling. The unassuming building doesn’t scream Doritos Cheesy Gordita Crunch, but once you get past the restaurant downstairs and its gift shop along with all of the other perks (A Salon! Dry cleaning! A Gym! Demolition Man pinball machine!), you start to get at the core of the company.

Taco Bell certainly has its own cult following. Their fans—and yes, they do have fans—have been known to not only get tattoos of their beloved eatery but get married at their Las Vegas Cantina. And while that might seem a little off-putting, is there another fast-food chain that inspires the kind of rabid, transfixing fascination Taco Bell does? 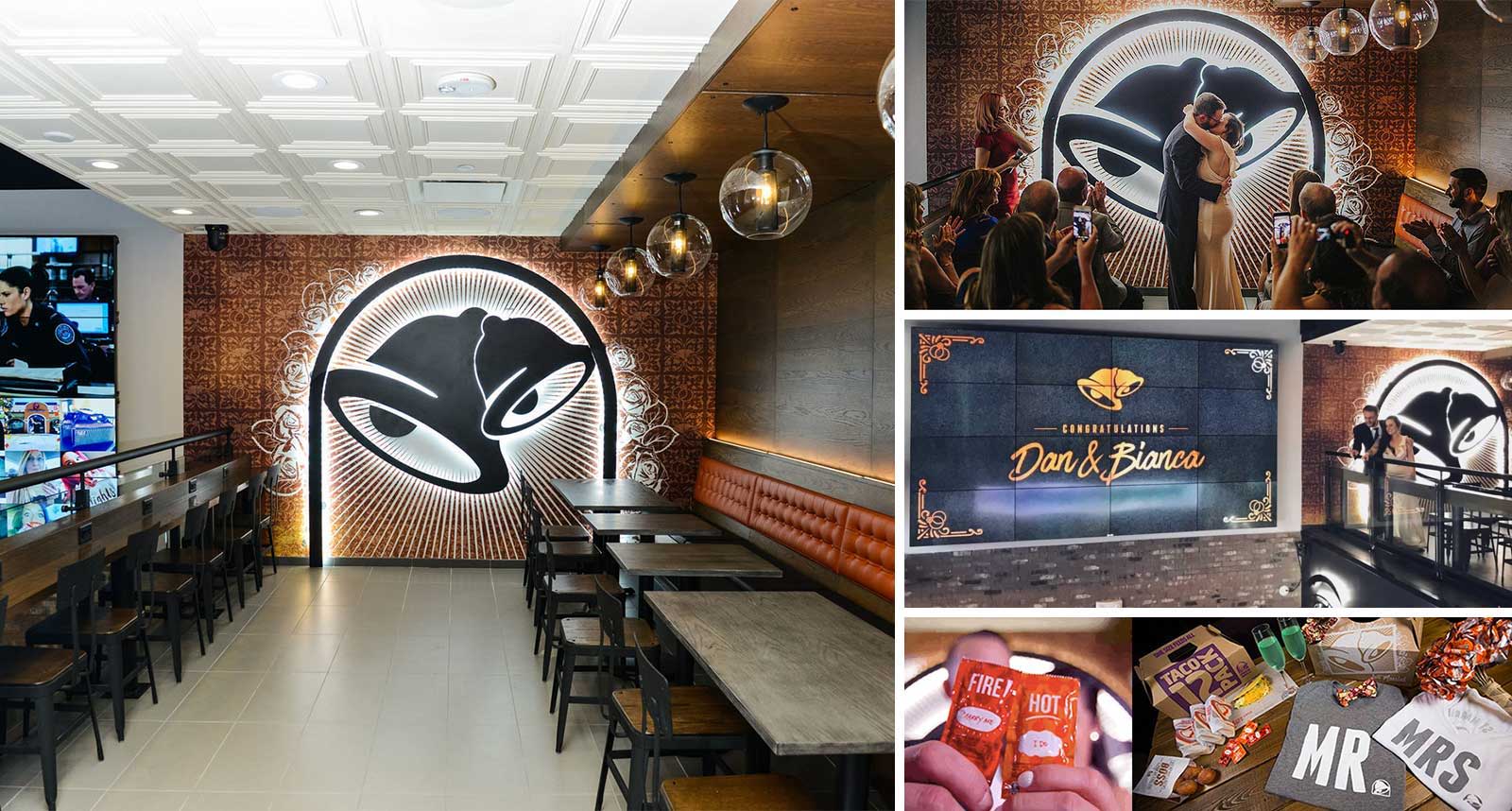 You can trace a part of their mass (and cult) appeal back to their in-house design team, TBD, where for over three years now they've been churning out great work at an absurd rate. They’re doing everything you would expect them to be working on—packaging, billboards, environmental designs, and menu boards.

You can trace the foundation of their work back to 2016 when they worked alongside Lippincott to evolve the brand identity, creating a new, minimal logo that they could customize and adapt as needed with different colors and textures. There’s nothing static about the logo itself, and it’s something they can take apart and put back together at will, as clearly evidenced by their packaging with its bell-ringing, abstracted appearance. 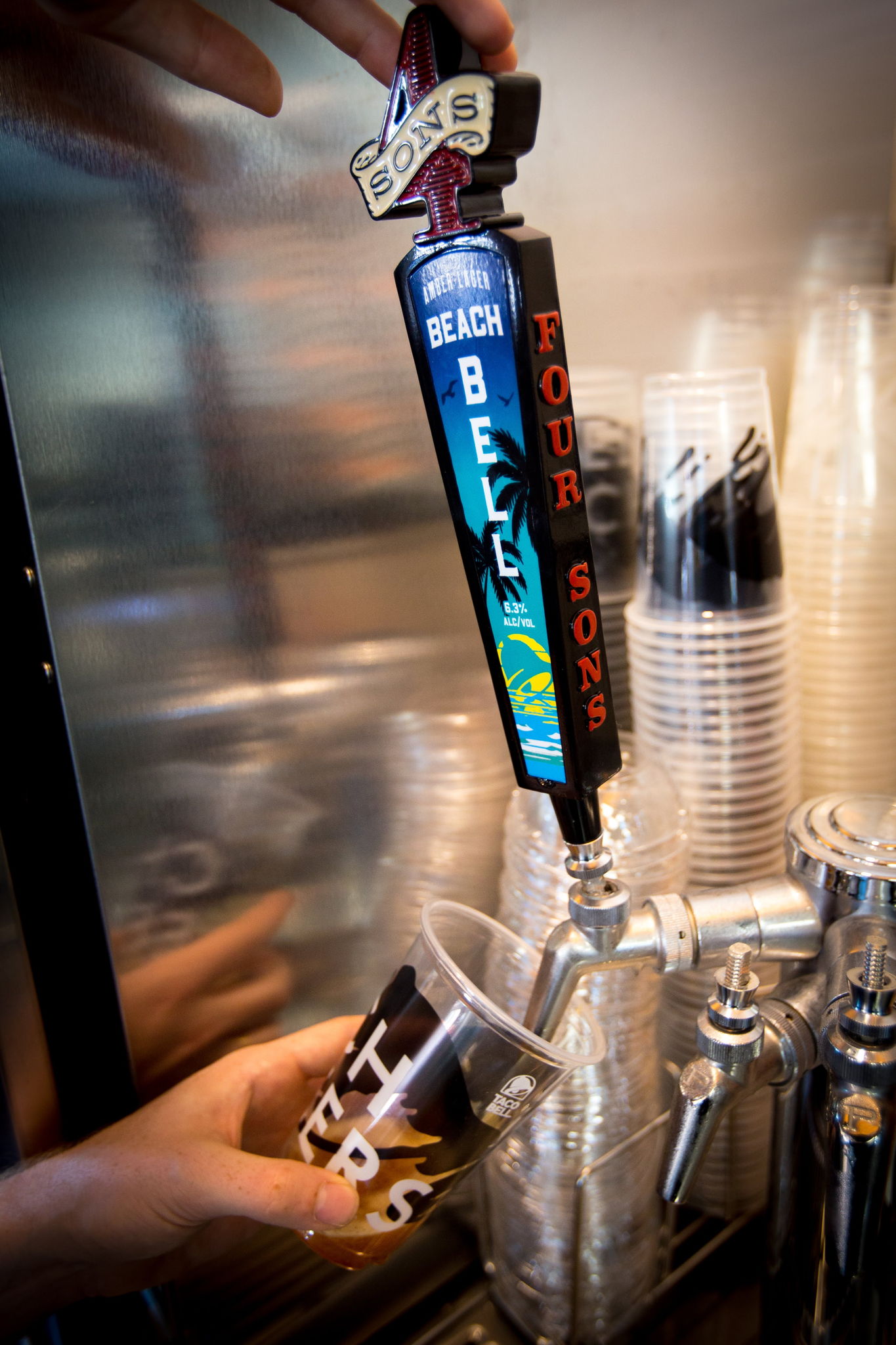 However, depending on your familiarity with all things Taco Bell, they’re doing a lot more than just that, and often their work takes them to unexpected places beyond the bell. In recent years they’ve collaborated on a fashion line with Forever 21 (and Taco Bell's Retail Engagement Team) that playfully incorporates hot sauce packets and tacos onto bodysuits and hooded anoraks. They will work with local breweries as they did when they opened their Newport Beach Cantina, brewing a Mexican-style beer with Four Sons Brewing called Beach Bell. They even dreamed up a limited-edition Xbox One (in conjunction with Taco Bell's Brand Partnership Group) with special packaging that utilizes the Taco Bell logo alongside intricate foil work (the Xbox also makes the Taco Bell bong when you power it on). 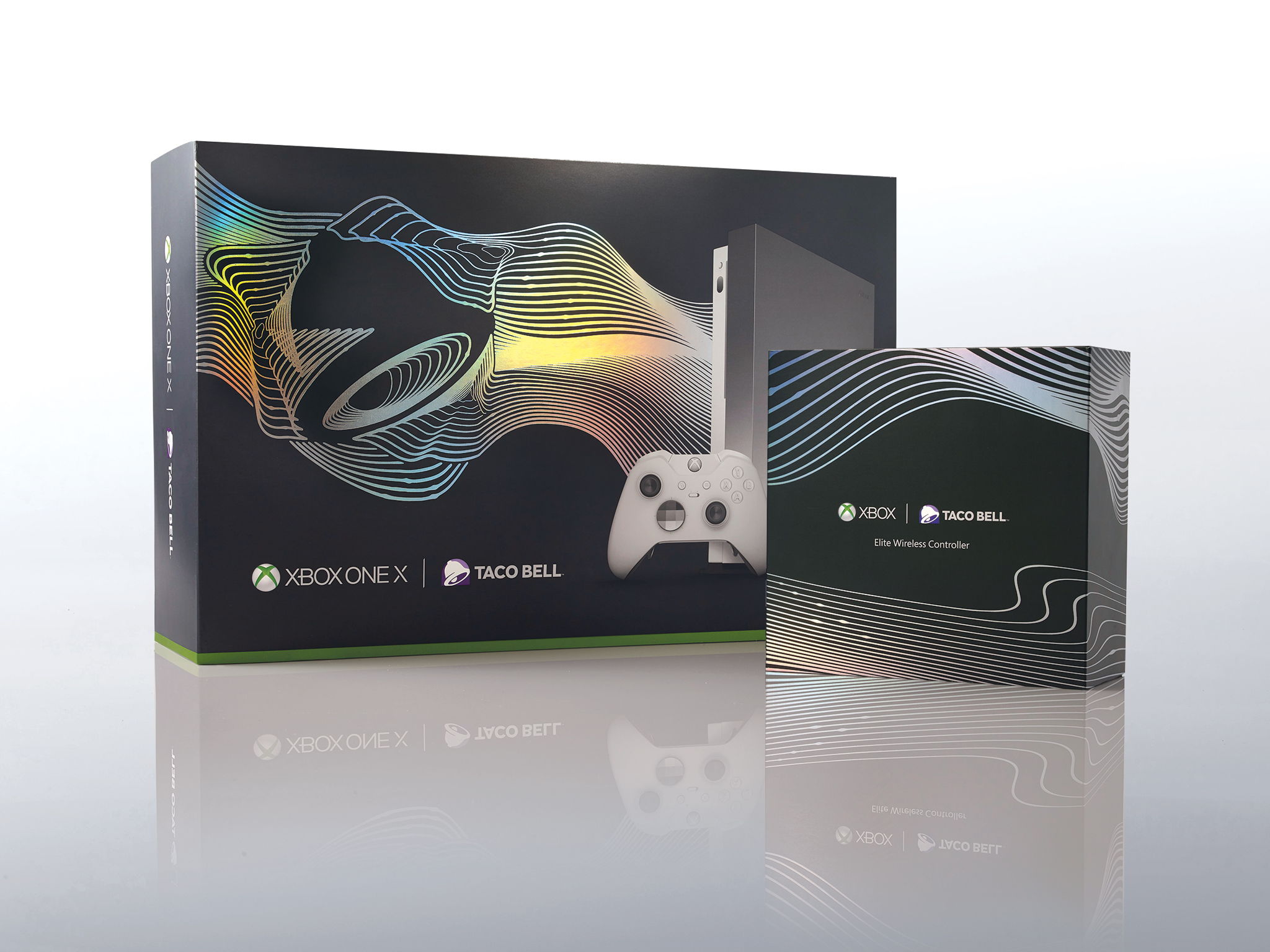 They even have designs on the very first Taco Bell location in Downey, California (also dubbed Numero Uno). When news broke out that the store would be torn down, their PR team banded together and saved the building from ruin, raising it from its foundation and driving it 47 miles to their headquarters where it sits underneath a tarp in their parking lot. What will happen to the store is anyone’s guess, but wouldn’t put it past TBD and company to do something otherworldly with it.

This is not your usual fast food chain. You’d probably roll your eyes if McDonald’s attempted to get away with some of the things Taco Bell already does. No one in their right mind would get married in a McDonald’s. You wouldn’t buy a Burger King sweatshirt, though mad respect to anyone out there rocking a BK crown.

“It’s because of the fans of the brand,” director of creative services and operations Kristin Morgan Anderson says. “People don’t just like Taco Bell, they love it. And we always consider our fans as part of the creative process so even the seemingly crazy ideas are authentic to them.”

That’s why their creative team has flourished—they’ve chosen to not just react to culture but to take an active part in it.

Executive creative director Chris Ayres came on board back in 2015, and since then he’s helped build their in-house team of over 40 creatives. What’s interesting is that Taco Bell is hardly alone in this as larger brands like Target and Chobani have done precisely the same thing. Instead of turning to some of the influential design agencies, brands are discovering they can build their own teams because often it’s cost efficient, plus they can turn work around much faster - and in the QSR world, that’s critical.

While some designers might think that working on the same brand might get a little dull, Chris and his team discovered that's not the case. 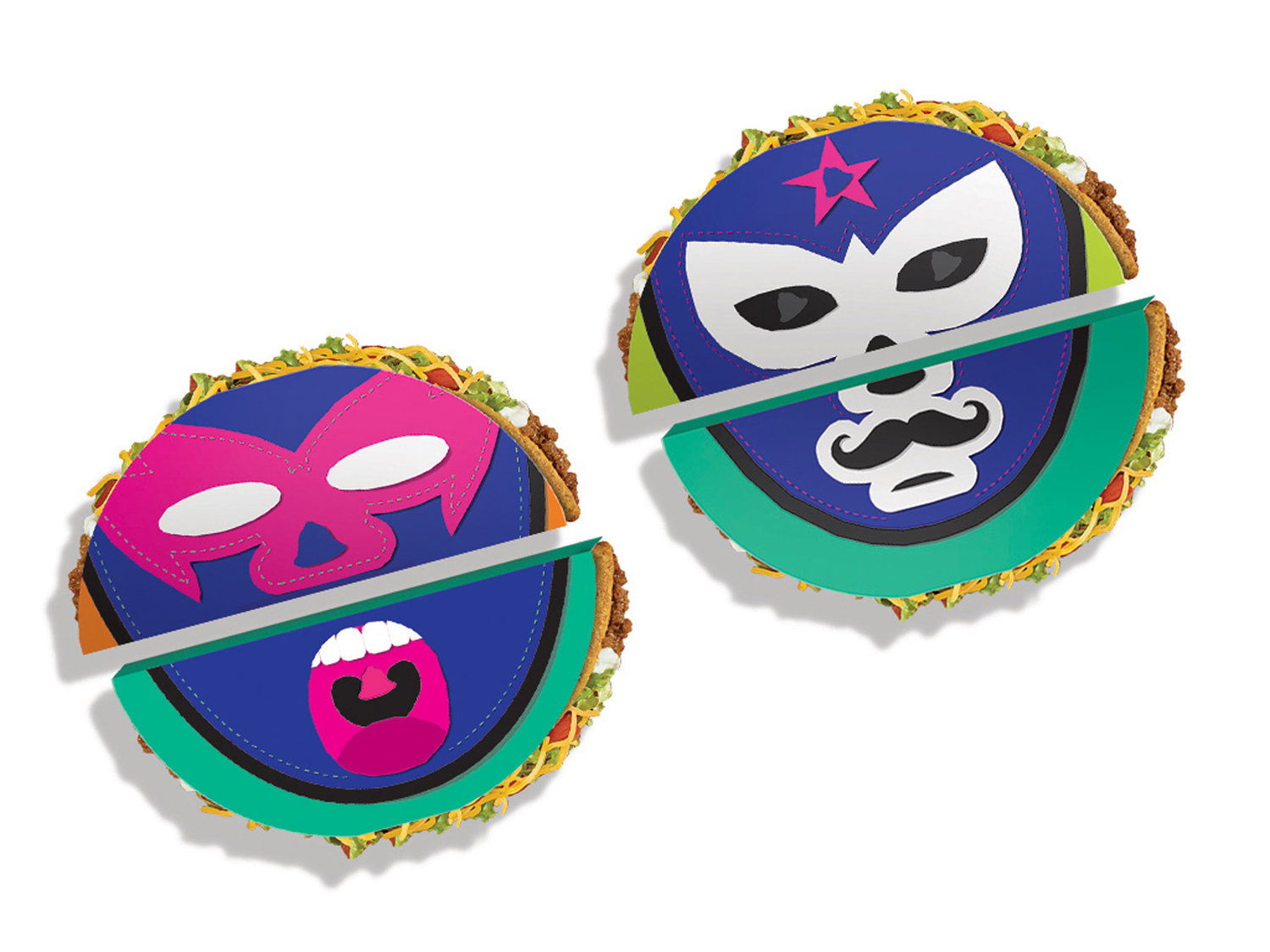 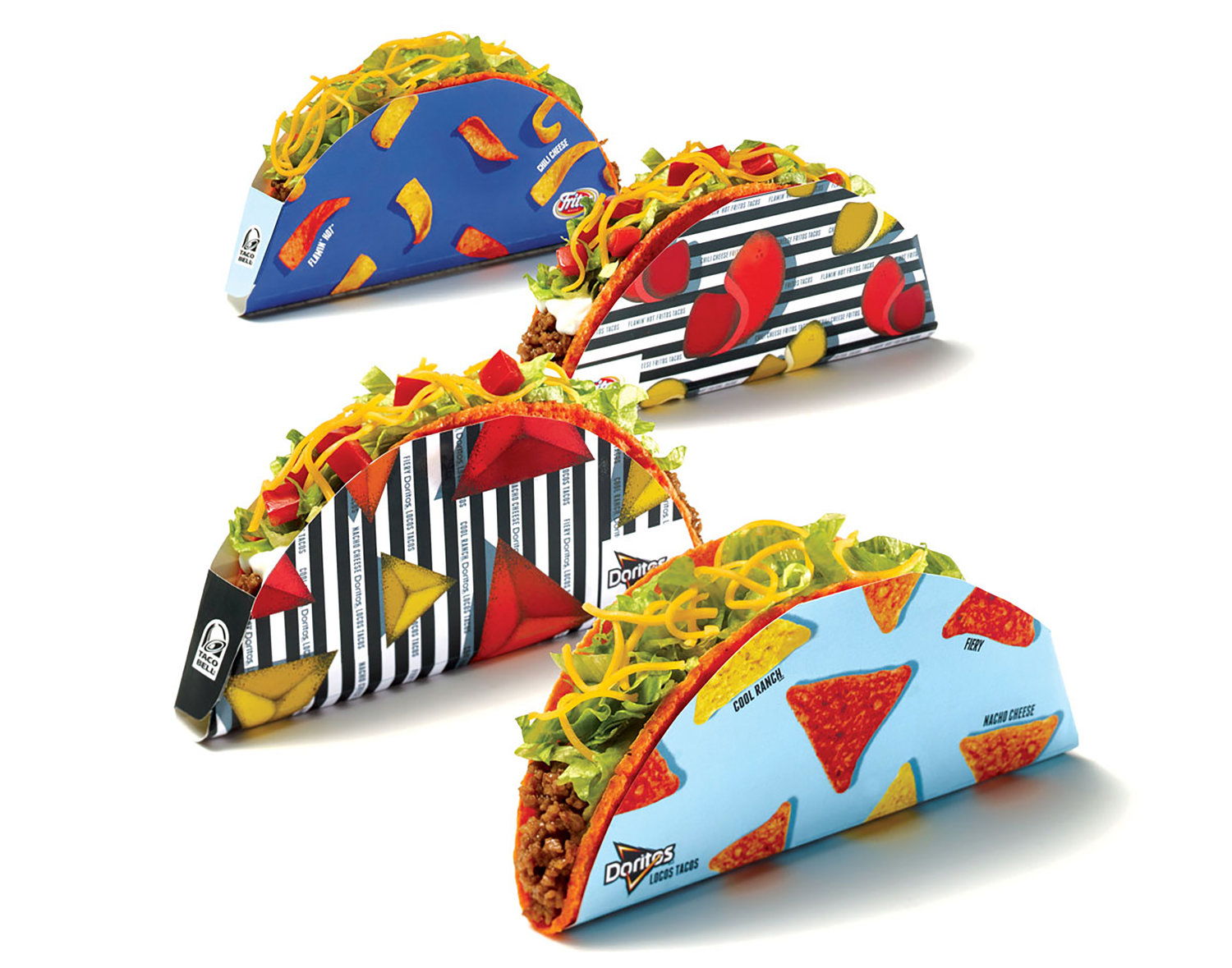 “The typical day is always a little bit different,” creative director Jess Kirkman says. “In the day and the life of a designer, you’re working on a bunch of different projects at a time. Anything from apparel design, to product launches, even pop-up shop ideas. Or maybe that day you’re at a photoshoot.”

“One of the fears we had that when we started this agency was creatives getting bored working on one brand, whereas at an agency you get to work on different things,” Chris says. “I think because we’re always getting permission to do new stuff, you never get bored. We get to work on billboards this month? Cool. Next month it’s creating a three-story mural in New York City? DOPE.”

While they’re continually adding more folks to their design group and acquiring new skills, their capabilities have only increased because they’ve proven themselves time and again. “I'm going to humblebrag.” Says Jess, “The amount of work we produce is incredible. I’m constantly blown away with this team.” 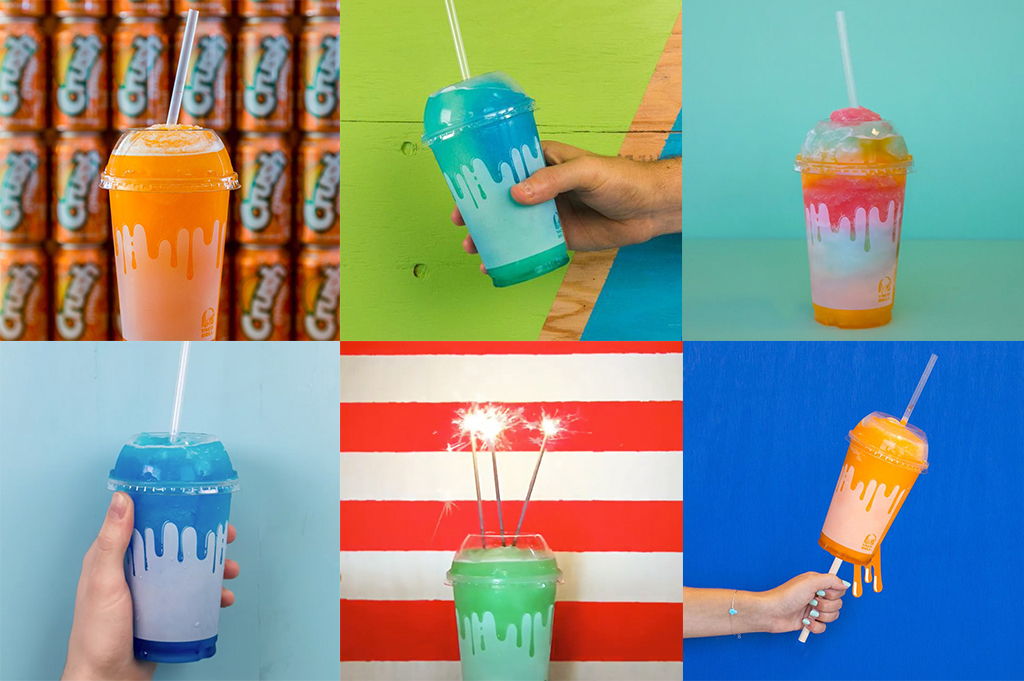 Of course, one of the other perks of working in-house is that you can actually see your work in the wild. “Coming from the agency side, you pitch and pitch, and it often goes nowhere,” Jess adds. “You’ll make one or two things a year, but being here, we make things every week. Physical, tangible things. You’re always feeling a reward, and that’s what keeps people happy and fulfilled.”

But it goes beyond just giving your work life. You get to shepherd the brand itself out into the marketplace, and you’re ultimately responsible for how it lives and breathes in the outside world, even with something as seemingly mundane as designing their expanded vegetarian menu coming in 2019.

“Unlike agency life,” Chris says, “you get to roll your sleeves up and be immersed in the brand and have an impact on outcomes that go all the way up to the top. There are some decisions that happen in real time on the walk to get coffee.” 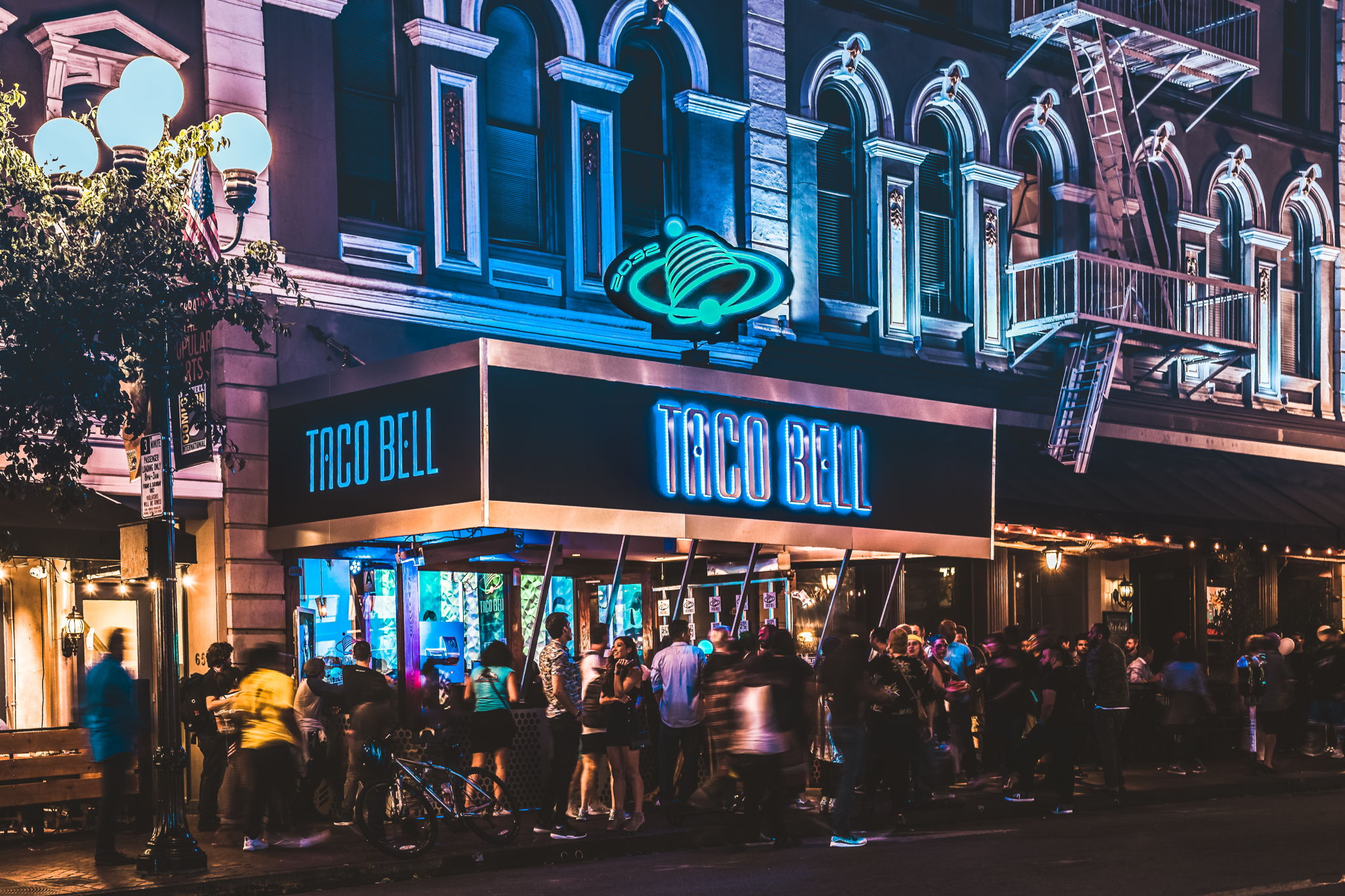 It’s those kinds of impromptu hallway conversations that led TBD, their PR group, and the Food Innovation team to a Comic-Con pop-up for the movie Demolition Man’s 25th anniversary (without getting too wrapped up in what Demolition Man is, all you need to know is that all of the restaurants in 2032 are Taco Bell as they won the franchise wars, and also that you should rent it now). Taco Bell fans have long obsessed over the Stallone vs. Snipes showdown, and TBD couldn’t resist an opportunity to celebrate that with futuristic design, plenty of neon lighting, and an avant-garde presentation of their cuisine delivered by robots.

From the moment they started brainstorming ideas, the leadership wanted to see what they were cooking up. Bringing your work to the table is never easy, especially when it might be a hard sell, but they never hesitate to showcase their ideas and the inherent value they have for the brand. Plus, the Comic-Con audience is always down for it. 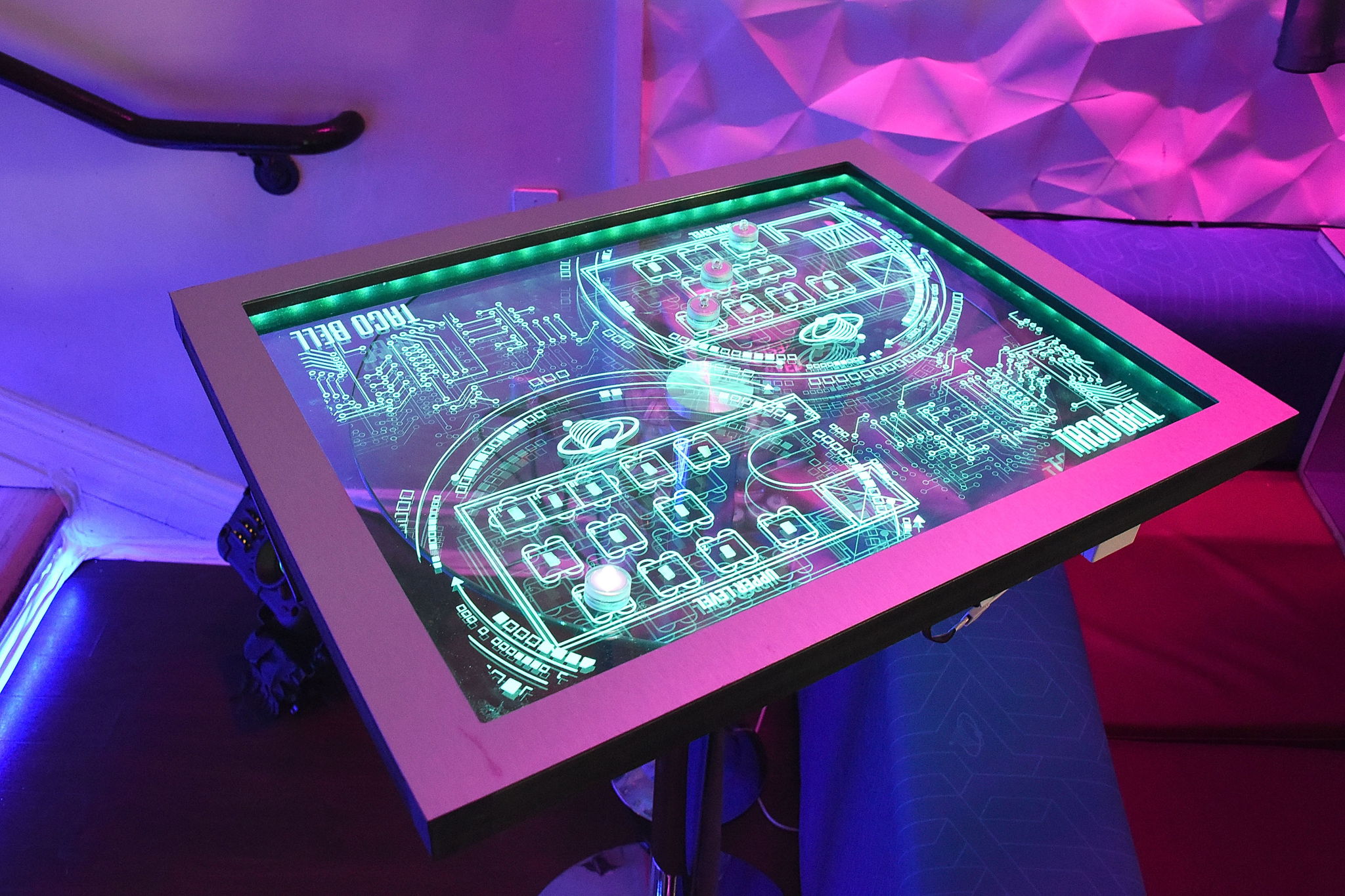 “We knew it was important to get even the smallest details right for the die-hard fans, like the meaning of the three seashells. I can’t even tell you how many discussions we had about the seashells,” Kristin says.

“Our Global Chief Brand Officer talks to us about how we walk a tight rope between being a big brand with mass appeal but also being niche and speaking to those pockets of fans that aren’t mainstream and how you aspire to be the best of both,” Chris says.

Being innovative also means keeping things fresh. Dubbed “Design Wars,” everyone on TBD stops what they’re doing, once a month, spins a wheel and whatever it lands on, the team has twenty minutes to create a design around that topic. The best design is later voted on by other departments. While it’s all in good fun—and brings out the cutthroat competitor in everyone—it’s a good way to flex their design muscles.

But even the work that comes out of Design Wars isn’t all for naught. “Sometimes design ideas and elements that are in this embryonic stage make their way into our national campaigns,” Chris says.

Getting your work seen is important for any designer. But you also want to be heard, and a forward-thinking organization will look to young designers to challenge conventional thinking. “How we do the work has evolved a lot,” Kristin says. “Someone new can come in and question how we do something, and the last thing we want to say is ‘because we did it that way last year.’ We encourage the team to try new things, and we're really lucky to work for a company that embraces innovation.” 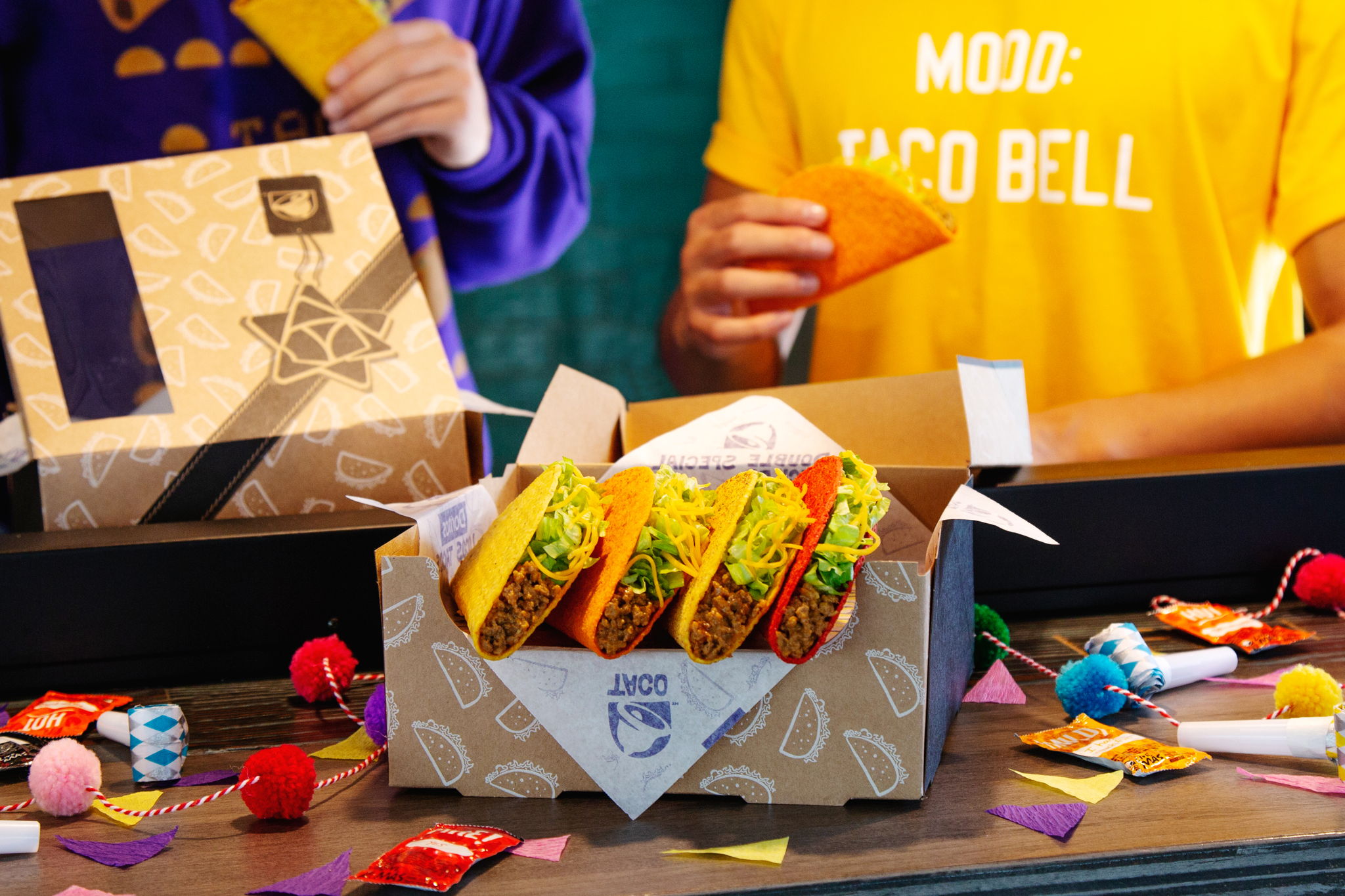 Taco Bell isn’t your usual fast food brand, and it’s something they’ve proudly embraced. In doing so, they get to be as delightfully weird and whimsical as they want to be, an essential when you have a devoted, loyal following. You know, the kind of fan that can even get excited when they see a Taco Bell taco hat in the wild.

“There’s an expectation to keep the brand new and exciting,” Jess says. “If we played it safe with what we put out there, our fans would be disappointed. We try and deliver every day on that expectation.”

“We’re a self-aware brand,” Chris admits. “I know our team’s work isn’t adorning the walls of the MoMA. But millions of consumers see our work every day. When they share an Instagram post or confess their fervent fandom, I feel the same level of pride and validation. Who says a QSR brand can’t have innovative design? Whether they know it or not, we’re designing it with care for them, and we hope our work reflects that in an authentically unique way.” 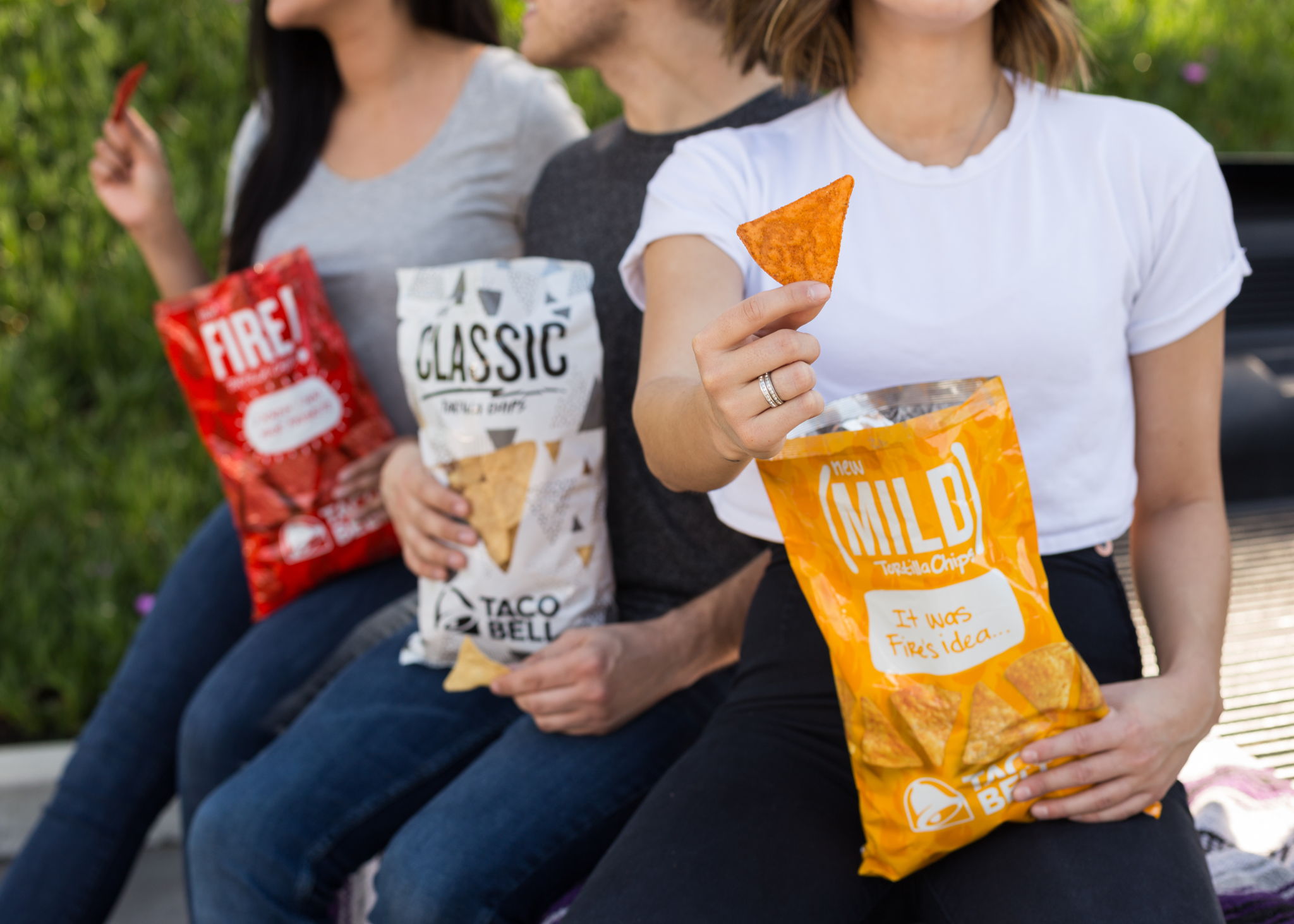