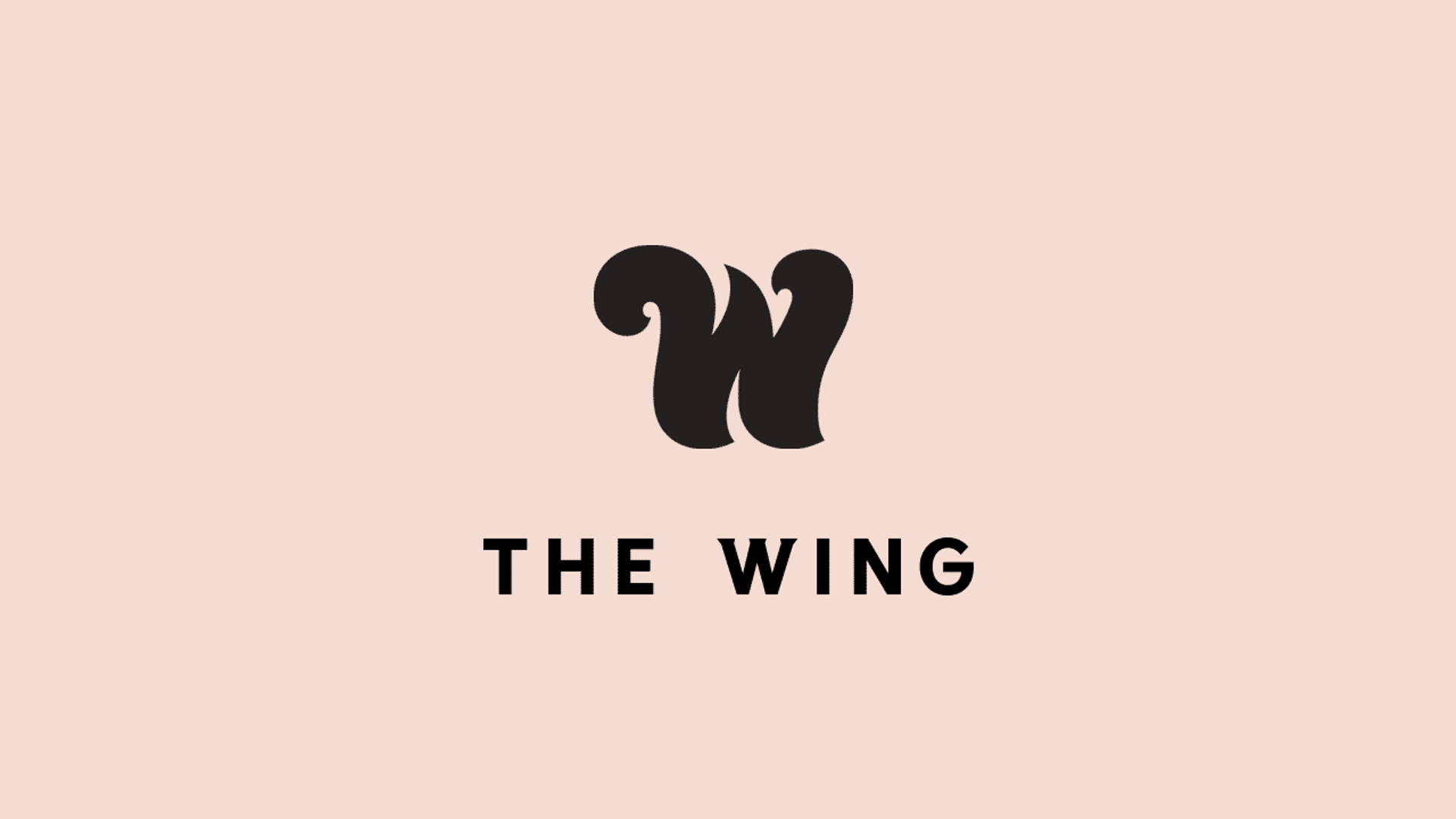 Yasss kween! Not only is The Wing, a new New York City social club made just for women, but it was also designed by an all-female team from Pentagram. Feminine, retro, and yet totally badass, The Wing looks like the perfect space for connecting with other amazing driven ladies. It’s fun and cheeky while still embracing a completely genuine vibe.

“What’s a gal to do when she’s out rushing between meetings in the city and needs a place to drop in and catch up on work or email, or to get ready before drinks and dinner with friends? Or a spot to network or find inspiration, or to just hang out and unwind? The Wing is a new women’s social club in New York that offers a multi-purpose home base for getting things done, or recharging and not doing much at all—a place where women can work and connect while they take on the world.” 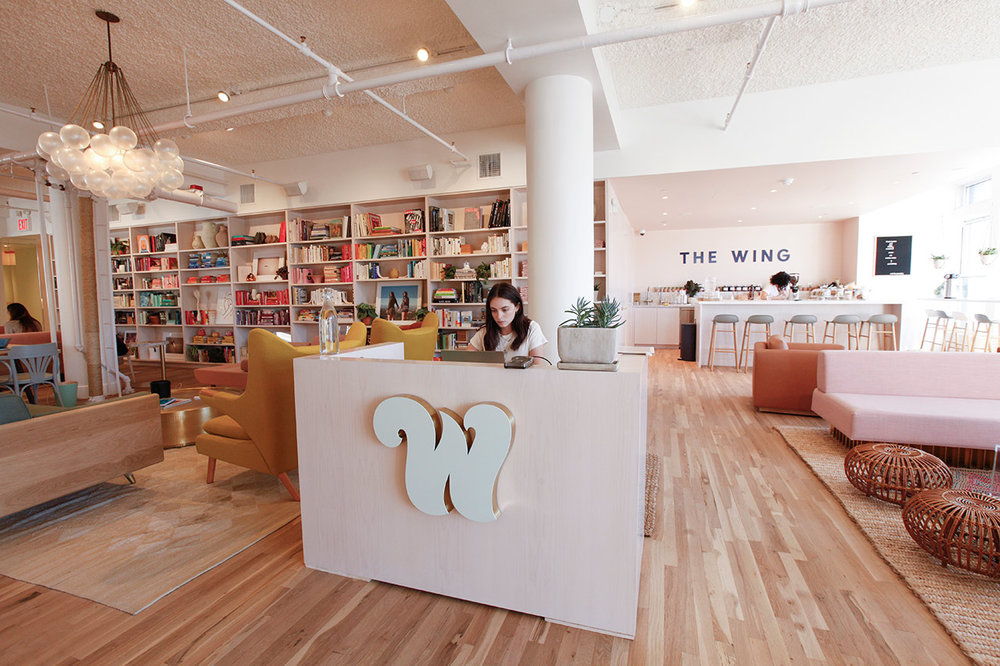 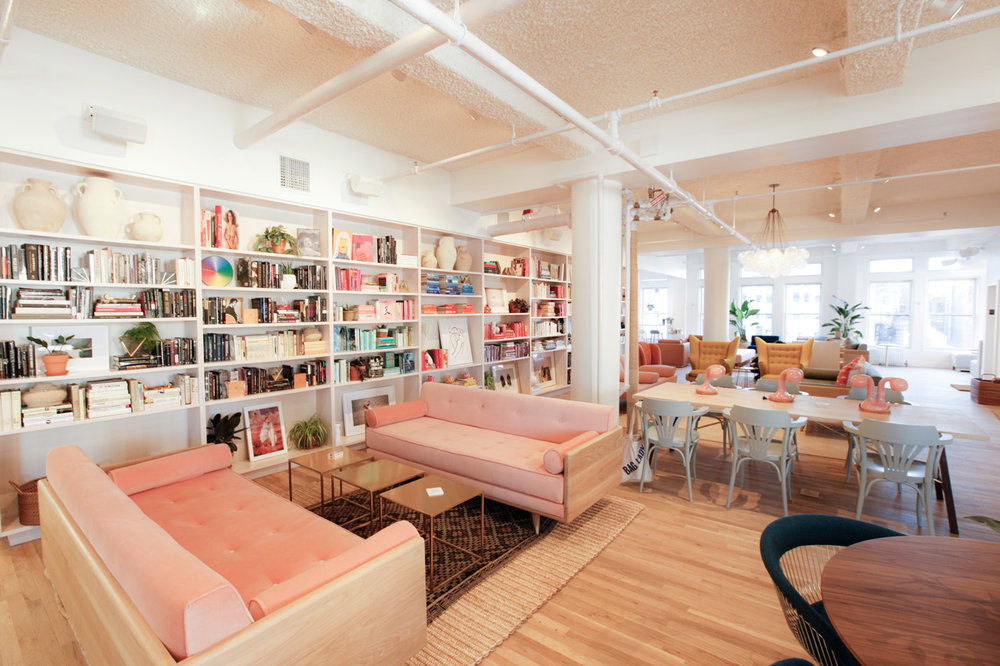 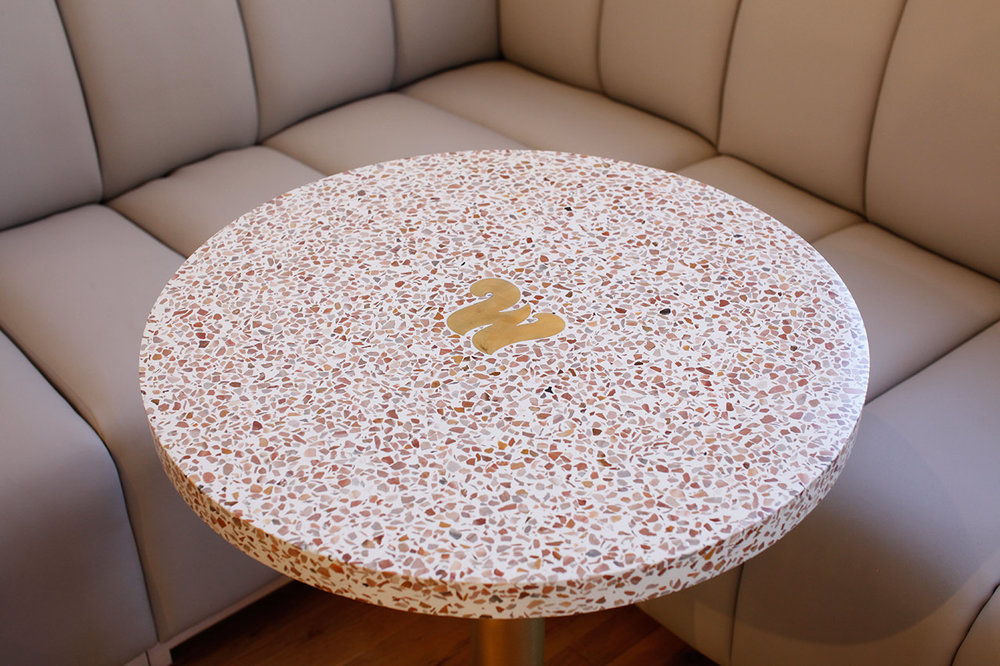 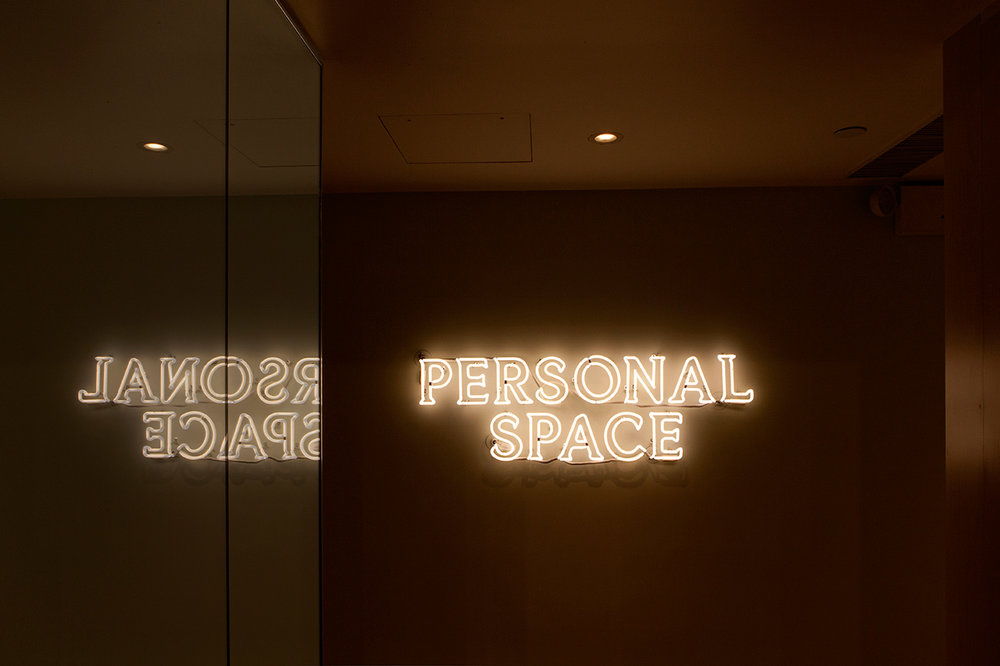 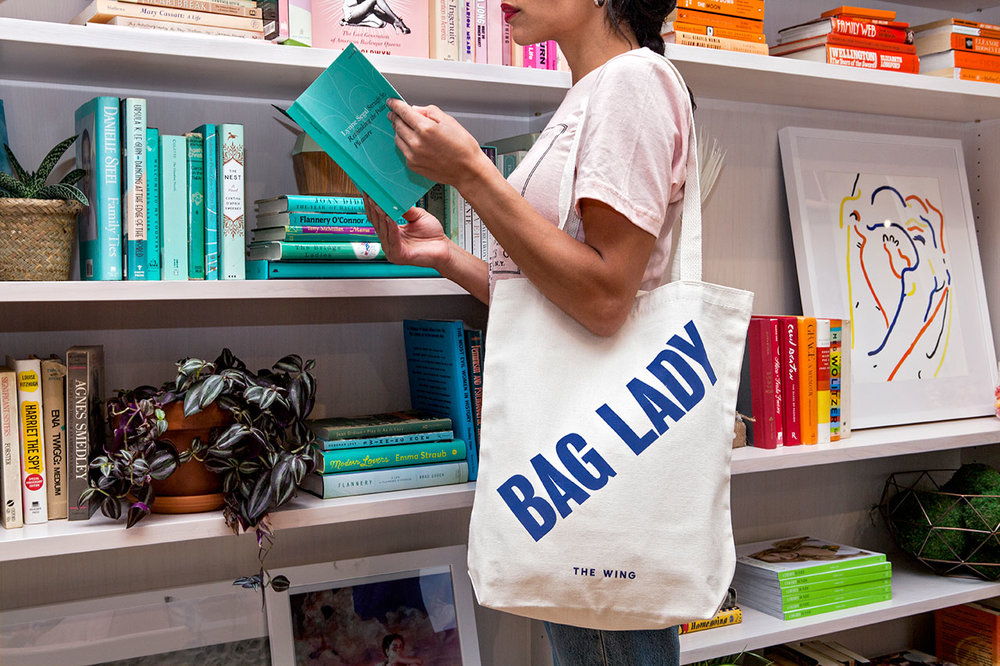 “Pentagram’s Emily Oberman and an all-female team of designers have developed a brand identity for The Wing that draws on the history of suffrage graphics and vernacular design to create a visual personality that’s smart, empowering, and more than a little fun. The project encompasses everything from the logo, messaging and collateral to environmental graphics, the Wing website, branded amenities for the club, and most of the products for the online shop.”

“Co-founded by the high-powered political and media relations strategist Audrey Gelman and Lauren Kassan, a former director of ClassPass, The Wing is envisioned as a place where women from different fields and backgrounds—writers, artists, designers, entrepreneurs and engineers, working in spheres as varied as politics, media, business, science, entertainment and the performing arts—can come together and have a creative exchange. (Gelman has called the concept a ‘Soho House for bad-ass women.’) The Wing launched this fall with 350 members, and is already a huge success, with a lengthy waiting list for new members and plans to extend the idea to other cities.”

“The Wing is located in the Flatiron District, just off of historic Ladies’ Mile, a neighborhood that a century ago was home to some of the leading women’s social clubs. At the time, there were more than 600 such clubs in New York alone, mostly organized around social issues. The Wing updates the concept to create a haven for working women.” 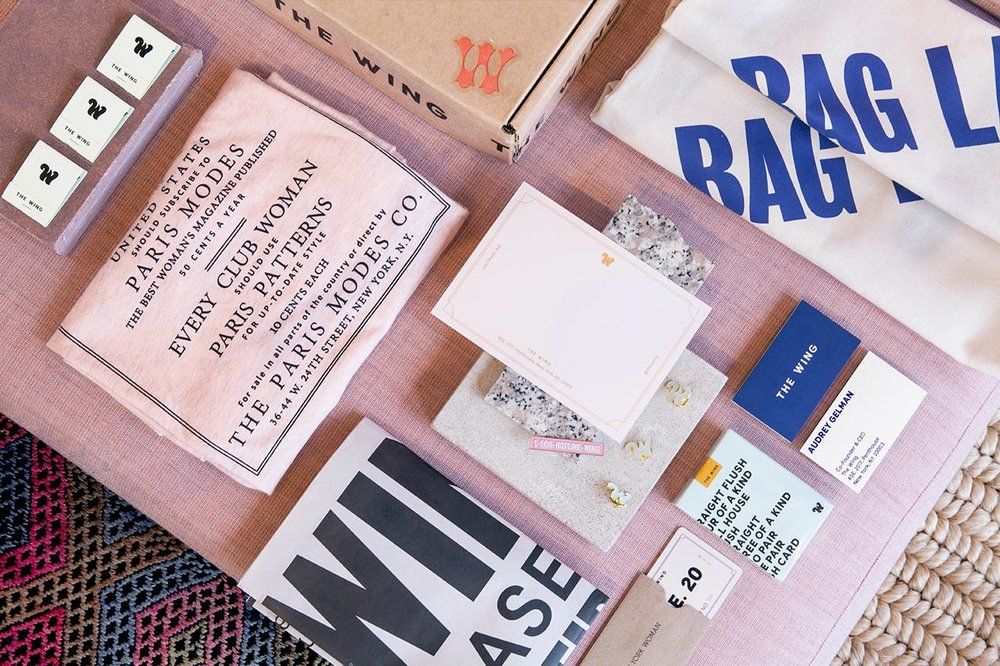 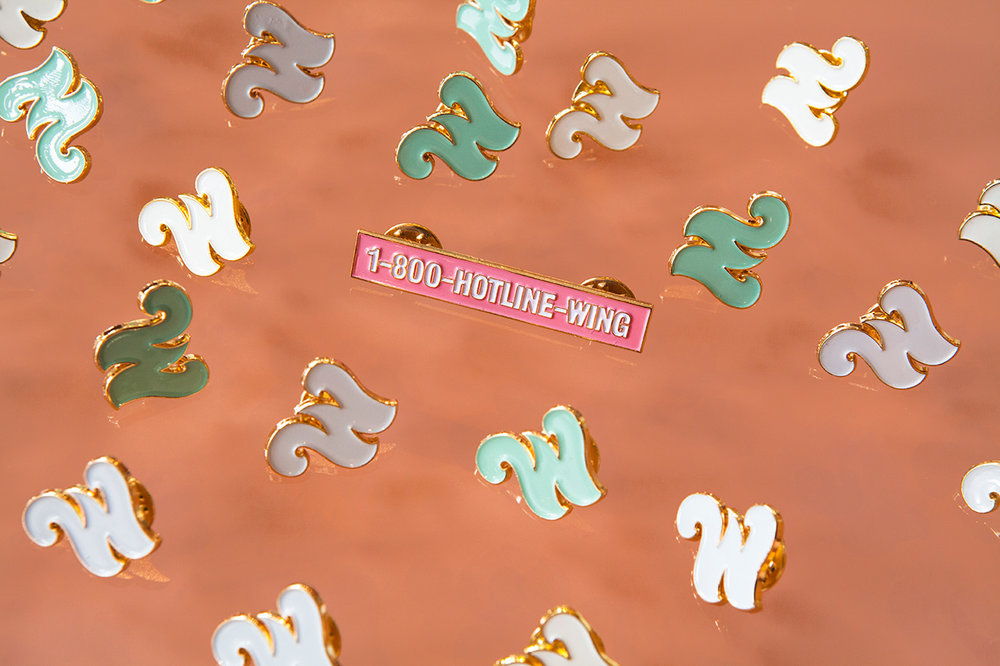 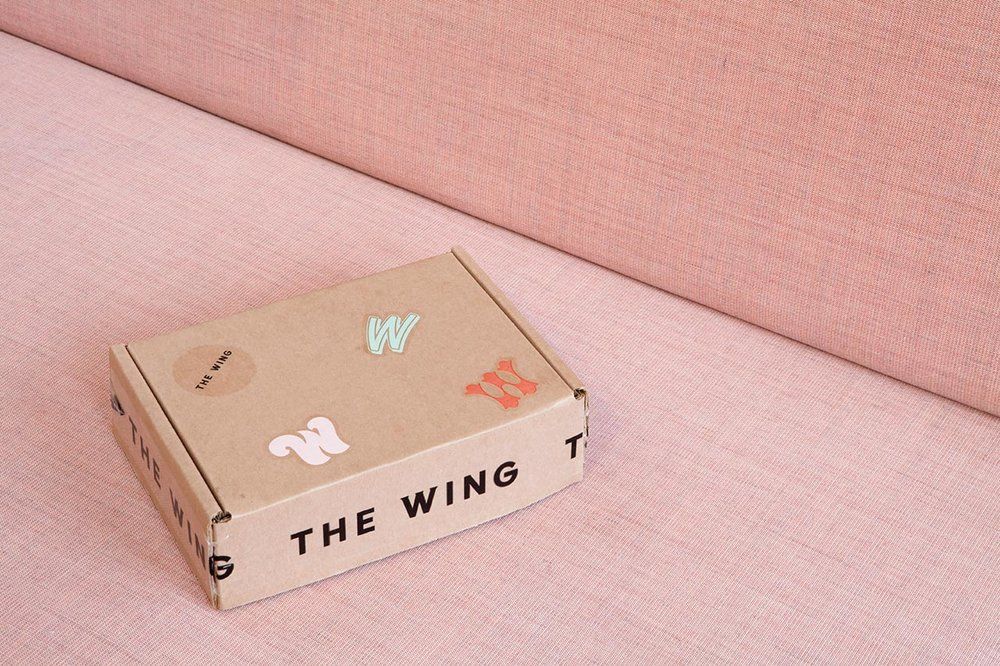 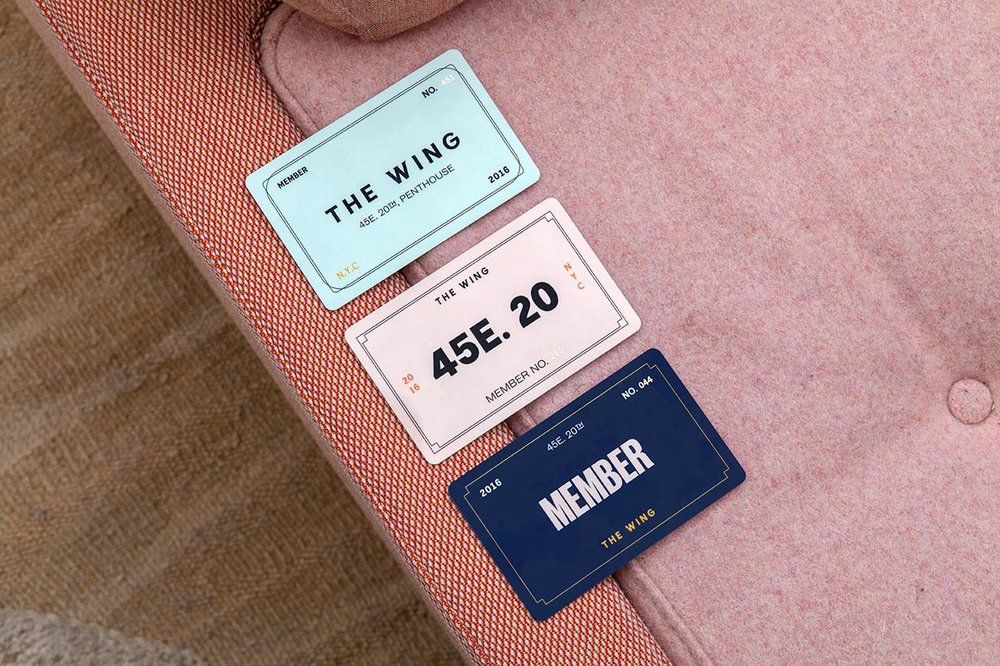 “The Wing is situated in the 12th floor penthouse at 45 East 20th Street, and the name references the idea that the club is a section of the building, as well as a place where women can soar. (The members are also ideal ‘wing women.’) The 3,500 square foot space features open working space, a café, library, conference room, phone booths, and a ‘Personal Space’ with showers, lockers, pumping room, and makeup room where members can get a blow-out. The interiors by the celebrated designers Chiara deRege and Hilary Koyfman evoke a cool apartment, with a mix of contemporary and vintage-inspired furniture and wood plank floors.”

“The Pentagram team worked closely with Gelman and Kassan to develop branding that felt authentic to the club’s bold point of view. The challenge was creating an identity that would appeal to a diversity of women without pandering or being stereotypical. Gelman and Kassan are witty, opinionated and incredibly savvy about politics and pop culture. (Gelman is the best friend of Lena Dunham and is said to have inspired the character of Marnie on ‘Girls’—but is way nicer.) The pair met their match in Oberman and her team, who are also political junkies and pop-culture obsessed and wanted the program to reflect the founders’ hyper-attuned aesthetic and smart sense of humor.” 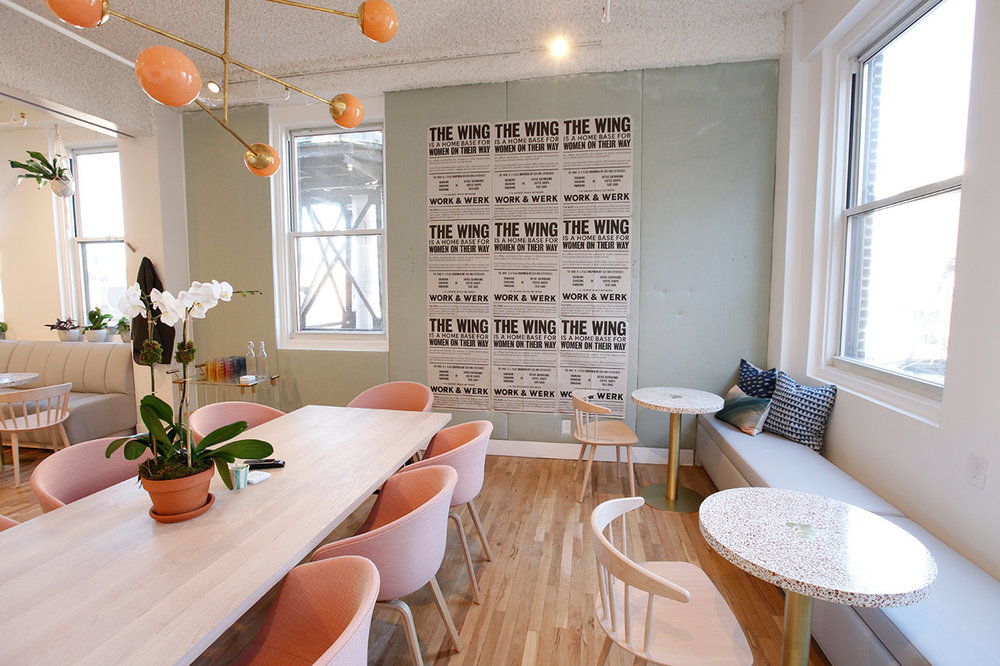 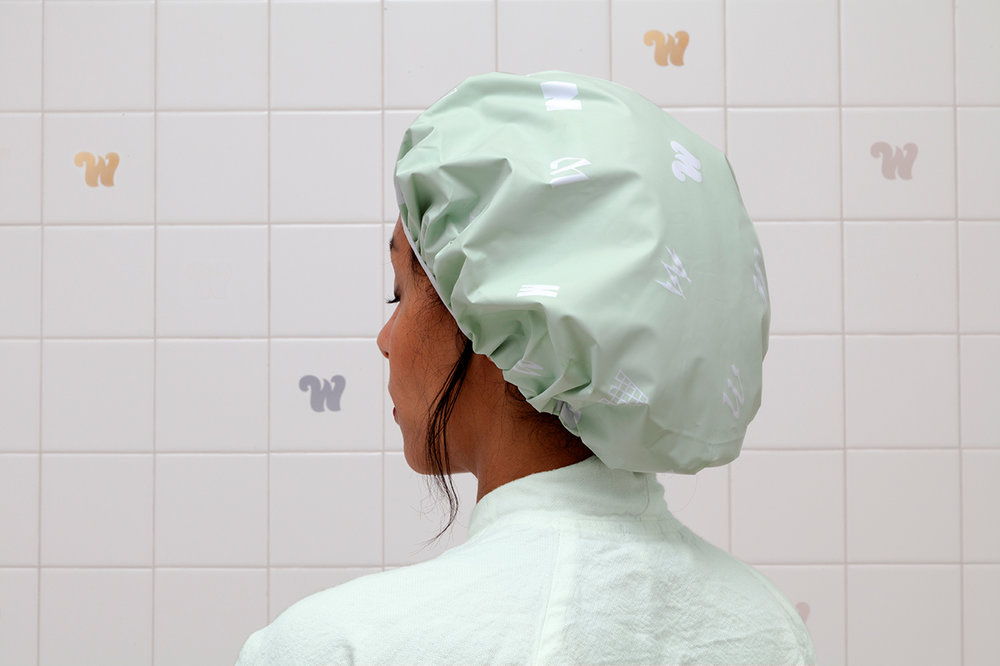 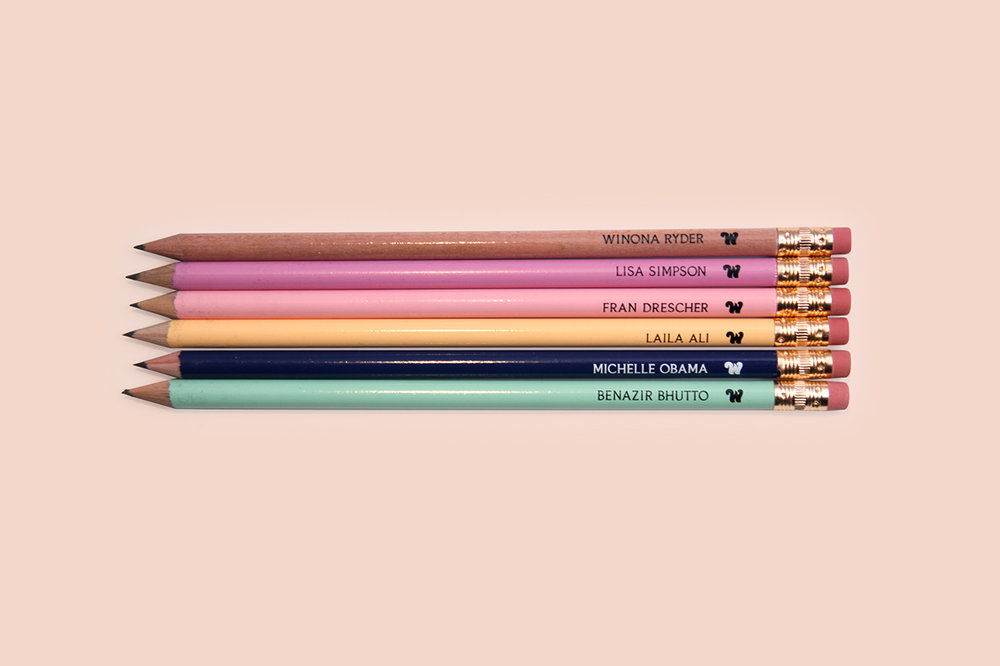 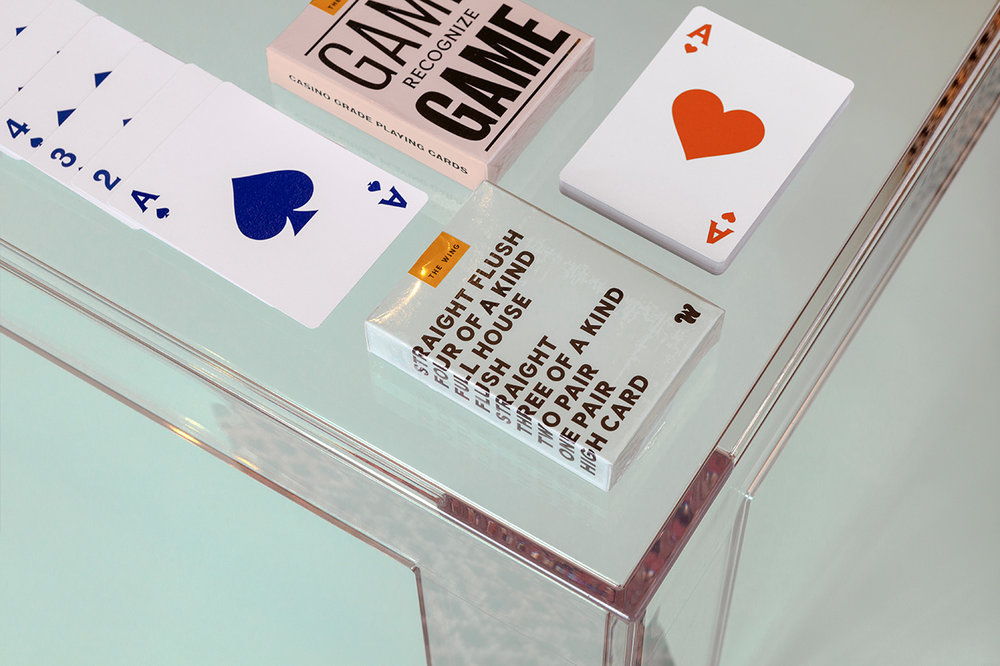 “Oberman and her team discovered Gelman was a fan of the classic branding for New York’s legendary Restaurant Florent, which was inspired by vernacular design. The Florent identity was designed by Tibor Kalman at the groundbreaking M & Co., where Oberman started her career, and used sly humor and subtle touches to help create a unique and echt New York sense of place. The designers wanted to take a similar approach for The Wing—and develop branding that appears underdesigned at first glance, but is full of small, thoughtful details that add up to a cohesive experience and vision for people in the know.”

“The Wing logo takes the form of an iconic letter ‘W,’ a simple monogram that also references the familiar signage for a women's room. But the identity utilizes a series of 30 different W’s, a nod to the eclectic makeup of the membership and its diversity of perspectives and different voices. The W appears in a wide array of historical and contemporary W’s, everything from Wonder Woman’s distinctive wing-spread symbol to unusual typefaces such as Alpha Sausage, Cottonwood, Mythos and Retail Script.”

“The wide-ranging W’s introduce an element of visual surprise that keeps the identity fresh and unpredictable, and endlessly flexible. The hero W appears alone as a bold insignia—welcoming visitors at the club’s front desk, and as the cursor on the website—or as a motley crew of miscellaneous W’s that form typographic patterns. This heterogeneous approach is filtered throughout the program. For instance, membership cards have been produced in three different styles, so members can choose their favorite, and come in slipcases labeled ‘New York Woman.’” 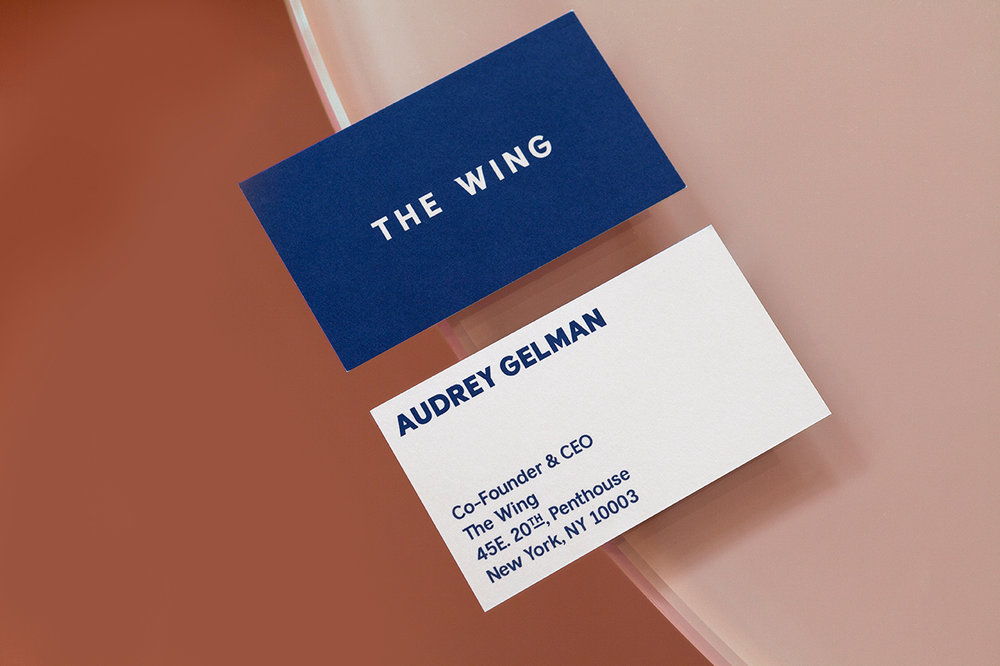 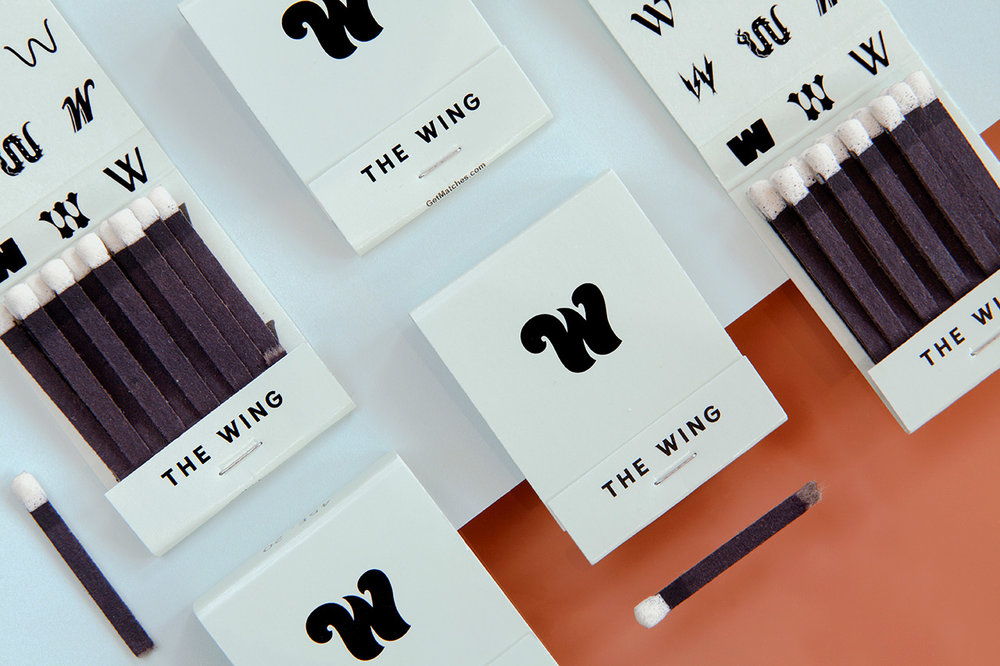 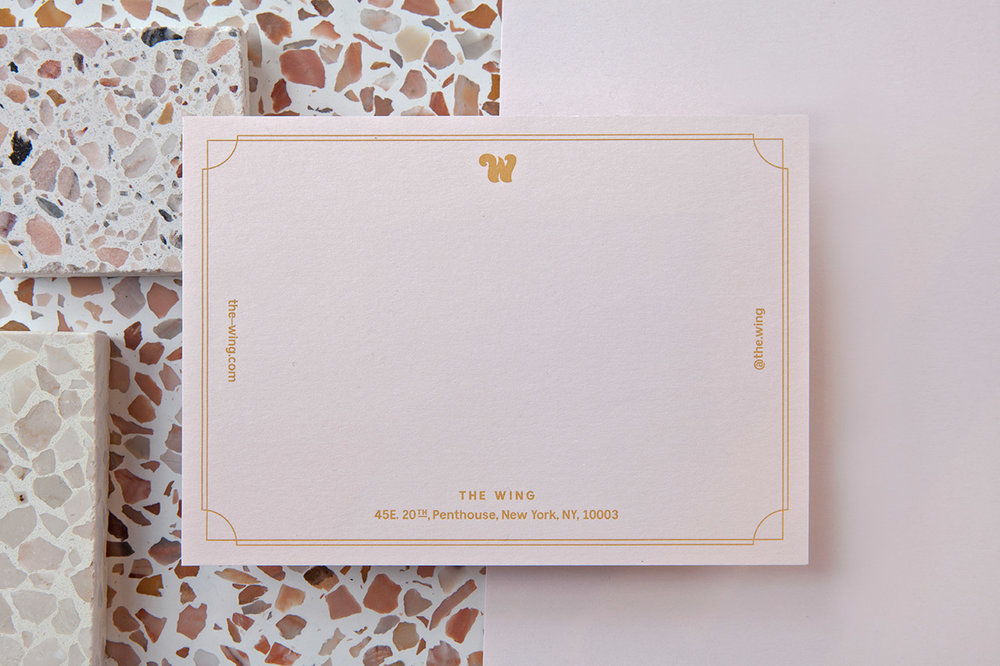 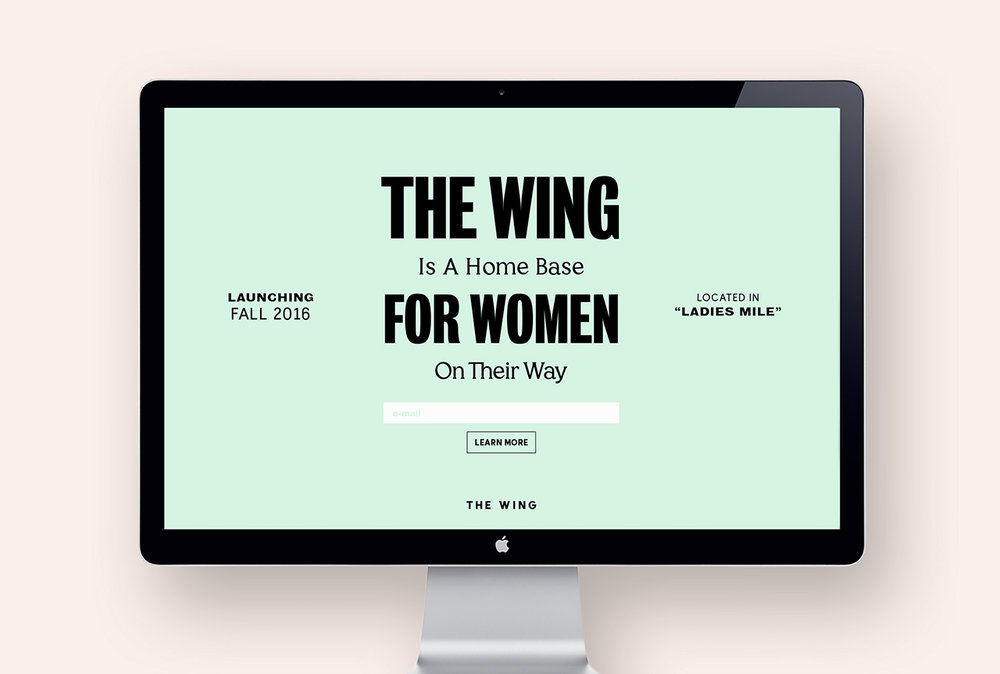 “The logotype and primary typography is set in the straightforward sans-serif Bianco, with the W of ‘The Wing’ signature set in the variant Bianco Serif, to give the letter little wings. Bianco Serif is also used for secondary typography and text. The hero W is a slightly redrawn Cruz Swinger and is meant to be strong and bold and curvy and unusual.”

“In tandem with the visual identity, Oberman and her team worked closely with the Wing founders to develop messaging that captured the club’s fearless spirit and attitude. The team imagined The Wing as a place where everyone from Fran Drescher to Issa Rae to Fran Lebowitz might possibly cross paths. Like the graphics, the messaging mixes contemporary vernacular with a smattering of sass.”

“‘The powerful graphics of the suffrage movement were a perfect point of reference, as they came out of women’s clubs,’ says Oberman. ‘At the same time, we wanted the identity and messaging to be fun and playful. This is a social space, and everyone there is smart, witty and outspoken. The branding needed to participate in the conversation.’"

“The messaging has a sassy, knowing tone that encourages members to feel they are part of the club. The designers created manifesto posters that declare ‘The Wing is a home base for women on their way,’ a nod to women’s suffrage. Towels are definitely ‘Hers,’ and the tote identifies its carrier as a ‘Bag Lady.’ Oberman and team loved designing the merch. Some favorites are a ‘1-800-Hotline-Wing’ pin (a play on the Drake hit), Ladies’ Mile socks and an inspiring women pencil set. For the welcome kit sent to the first 200 members, the team designed a set of custom poker cards with the tagline ‘Game Recognizes Game.’ The package also included custom notebooks and a personalized note from the founders.” 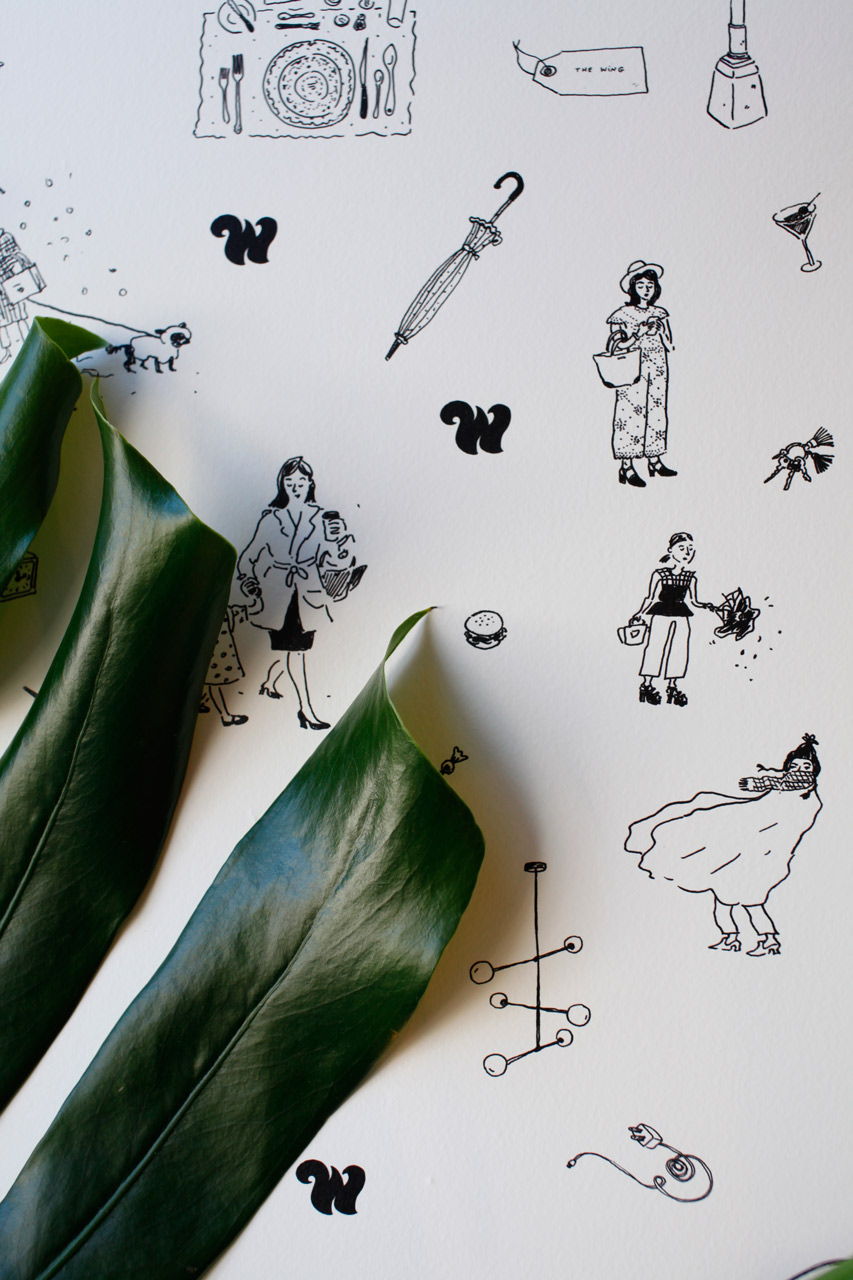 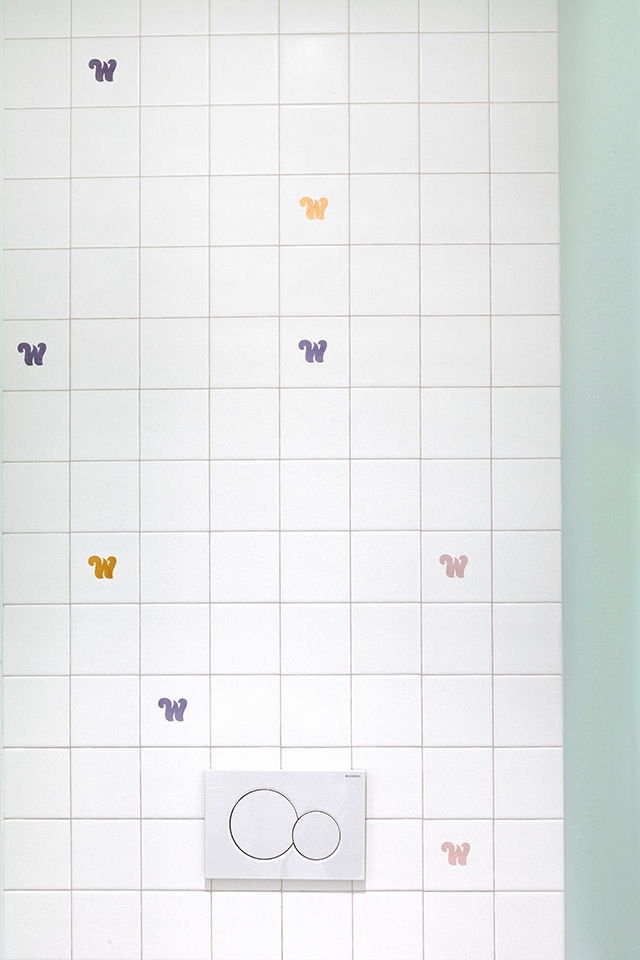 “The cheeky tone of voice is offset by a look and feel that is simultaneously scholarly, elegant and feminine. The color palette is a pale take on pastels, inspired by paper goods like stationery and cards—classic ways of communicating. The main brand color is pink, reclaiming a polarizing color for many women, but in a cool, modern hue. The precisely considered secondary colors include mint green, deep navy blue (Oberman describes it as “ballpoint-pen blue”), gray and black, with golden mustard accents.”

“The branding is integrated throughout the interiors in environmental graphics that help make the space inviting and one-of-a-kind. The ‘W’ logo is also emblazoned on custom tabletops in the café, and appears as a pattern in the custom tile of the bathrooms and even on the shower caps. The Personal Space is identified in blazing neon, and for the wallpaper in the beauty room, the founders commissioned the Brooklyn illustrator Joana Avillez to create a custom pattern of women doing different activities like yoga and hailing taxis.”

“As part of their work on the project, Oberman and her team have become members of The Wing. ‘It's a new kind of creative space, and we're proud to have helped bring it to life,’ she says. ‘We can’t wait to see the amazing collaborations that it will foster among such an incredible group of women—and we’re already making more stuff!’” 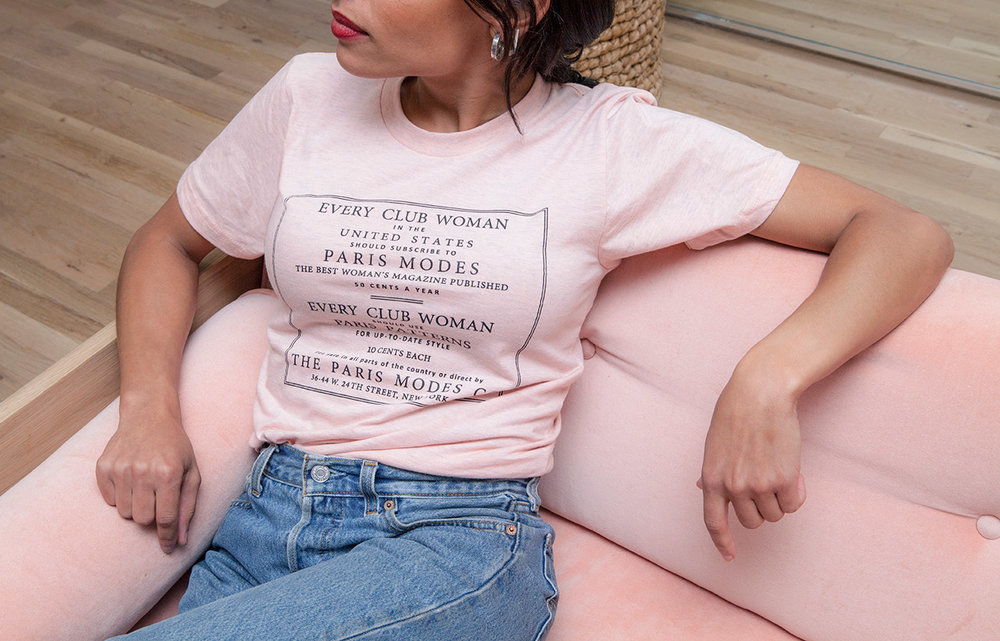 Neurodesign: How Science Plays a Part in Superb Packaging

A Customized Perfume that’s as Unique as You Are