The History of Plastic: The Theft Of The Recycling Symbol

This is the third part of our series, The History of Plastic. You can find the first chapter on the invention of throwaway living here and the second part on McDonald's role in the single-use plastic crisis here.

The start of the 20th century started precariously enough, as the geopolitical machinations of the world’s superpowers eventually led to a series of wars, plagues, and economic calamity that would culminate into World War II and the ushering in of the nuclear age. Those that had survived the first half of the century were ready for happier times, taking advantage of the advancements in industry and technology. Synthetic materials such as plastic helped create a life with more conveniences than ever before, and consumers, tired of austerity, embraced the new age of plastics.

That life of convenience came with a hidden or perhaps ignored, consequence to the environment. One could understand the reluctance to acknowledge the potentially destructive nature of this reliance on plastics, especially when used to make disposable items, people were ready to live it up a bit. But it wouldn’t take long to see the repercussions, and by the early 70s, a movement aimed at calling attention to the worsening state of the planet started to grow. 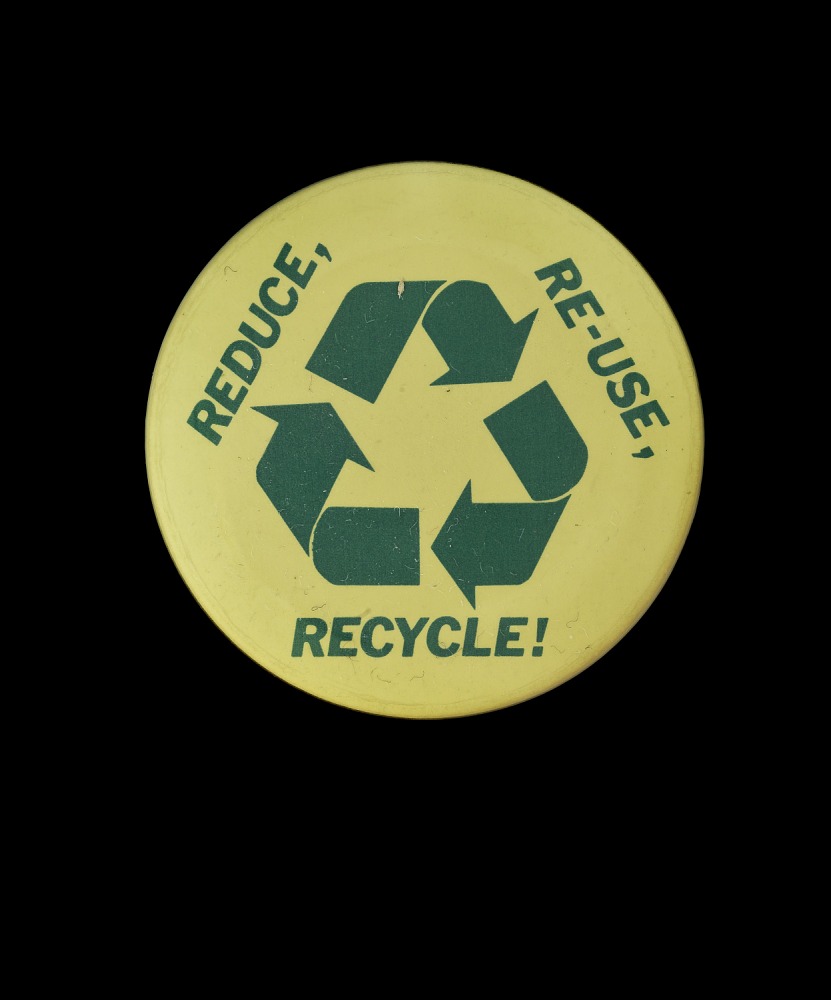 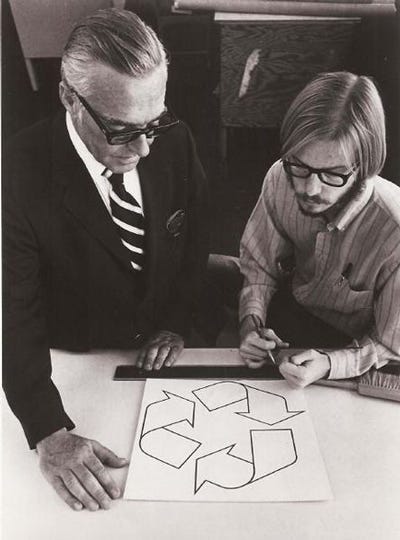 Environmental disasters like oil spills, mine explosions, and deadly smog galvanized many into taking action to curtail destructive practices. Images of once-pristine wilderness and coastlines were now in the news shellacked in oil or covered in garbage. In 1969 an oil spill on the Santa Barbara coast inspired Earth Day, held the next year. Shortly thereafter, a design contest would bring unto the world one of the most recognizable symbols of the 20th century.

Container Corporation of America (CCA), at the time a prominent manufacturer of corrugated paperboard and boxes, held a student contest to not only develop a new label for recycled and recyclable paper cardboard but to actually raise awareness about recycling.

Gary Anderson, then 23 and a student at the University of Southern California, wasn’t particularly interested in graphic design. He was pursuing an architecture degree and would later go into urban planning, but he decided to submit a design after seeing a poster about the contest on campus. Inspired by Dutch artist M.C. Esher (a popular figure among the counterculture because of his work’s psychedelic lean), Anderson’s Möbius strip-inspired glyph was chosen the winner from approximately 500 entrants by a panel of judges that including Saul Bass, Herbert Bayer, and Eliot Noyes at the 1970 Aspen Design Conference, the theme of which was “Environment by Design.” Anderson won $2,500 towards his studies for his troubles.

"The figure was designed as a Möbius strip to symbolize continuity within a finite entity,” Anderson claimed. "I used the [logo's] arrows to give directionality to the symbol...I wanted to suggest both the dynamic (things are changing) and the static (it’s a static equilibrium, a permanent kind of thing)."

There was no entry fee for the contest, and it took no more than the paper and drawing tools he already had. Better still, this wasn’t one of his architectural projects—he only needed to consult himself and no one else, so it was something he could do by his lonesome.

“It didn’t take me long to come up with my design,” he later wrote in the Financial Times. “A day or two. I almost hate to admit that now. But I’d already done a presentation on recycling wastewater, and I’d come up with a graphic that described the flow of water, from reservoirs through to consumption, so I already had arrows and arcs and angles in my mind.”

What was a fun distraction for the 23-year-old Anderson would go on to deftly represent the concept of recycling. CCA would quickly and widely adopt its use, bringing attention to the benefits of taking used materials and turning it into new paperboard.

The original implementation of Aderson’s design included variations for packaging made from recycled material, three folded arrows inside a black circle, while packaging that contained only some recycled material came with an empty circle containing black arrows, sometimes accompanied by a percentage. If a container can get recycled, then it was imprinted by the outline of three folded arrows. This, however, was not set in stone, as no one held the rights to the mark, nor could anyone enforce a standard.

CCA would go on to successfully get other companies to adopt the symbol, so well, in fact, that the firm was unable to trademark the design, meaning that it fell into public domain. Now, anyone could use it for any purpose, with no need to license the symbol. While some governments came to regulate the glyph or its derivatives, the lack of trademark protection only helped the logo propagate quicker, leading to its adoption as THE symbol for recyclability, even when the item emblazoned with it isn’t necessarily recyclable.

In 1988, the Society of Plastics Institute (SPI) developed a system of codes and symbols of their own, to facilitate the sorting of plastics.

The original Resin Identification Codes (RIC) symbol was three arrows forming a triangle with a number in the center. Each number represents a type of plastic material like Polyethylene Terephthalate (PET) or Polyvinyl Chloride (PVC). Many US states, following California’s lead, adopted single-stream recycling programs, a significant component of which is the curbside pickup of unsorted recyclables. While SPI assigned seven types of plastics a code, not all municipal recycling programs accept the same materials. The onus was, and for the most part, remains on the consumer to know what types of plastic are processed locally.

Of course, none of that is clear from the RICs printed on bottles, boxes, and other items. The similarity to the paper recycling symbol likely created confusion, as did efforts to make recycling as easy as possible through the single-stream collection process.

You can also read the RIC as a defensive tactic employed by the plastics industry against the growing calls for bans, deposit programs, and mandatory recycling. And why? Well, states that have deposit laws on the books have higher recycling rates, and if more of them were to take up similar bills, it would cost businesses like the beverage industry billions when it comes to handling fees and taxes on unclaimed deposits that go directly to the government.

The plastic industry lobbied state governments to adopt the RIC systems, although the symbols themselves caused the impression that items bearing a RIC identifier was or could be recycled.

And that’s really what so much of the confusion comes down to. Either a consumer believes the packaging they’re holding comes from recycled materials—it’s not, there are different logos for that—or that it’s recyclable, meaning, check with your local recycling facility.

Two decades later, the American Society for Testing and Materials, or ASTM, would take over administration of the RIC, adding new codes and, in 2013 changes to the RIC symbols, replacing the arrows for a solid triangle, which is to “bring focus back to the system’s core mission, resin identification and quality control prior to recycling.”

The SPI, now known as the Plastics Industry Association, weren’t the only ones to create symbols that bear some resemblance to Anderson’s original design. Japan has implemented its system of identifiers, the island nation’s recycling codes are designed to be used, in part, by consumers separating their recyclables. The symbols vary in shape, using squares, triangles, and rounded symbols, including material identifiers and whether it is composed of mixed material.

Elsewhere, other symbols surrounding recycling seem to borrow elements of the 1970 original. For example, in the UK, the “widely recycled” symbol, meaning that the material is accepted by 75% or more of local authorities, is a circular arrow. The European Green Dot symbol, meaning that the manufacturer has contributed financially towards recycling their packaging, although not necessarily that the packaging is itself recyclable, features two circular arrows with the heads meeting in the middle. The European “seedling” symbol, awarded by TUV and assigned to compostable bioplastics, also makes use of a Möbius strip-like shape, and the leaves resemble an arrowhead.

While it would appear that later symbol designs moved farther away from the original than the first versions of plastic’s RIC, none of them solve fundamental problems with recycling, especially single-stream programs. The symbols themselves are standardized, but the recycling is mostly a patchwork of local agencies that accept and refuse different materials. While the Japanese system identifies mixed materials, the RIC system does not. Most symbols also don’t inform the consumer of any specific directions, such as rinsing before tossing or to separate different materials and how. However, How2Recycle and its partnership with brands have resulted in clearer instructions at the bin, clearly telling consumers how to dispose of their packaging, while also employing the original recycling logo.

While recycling may have provided a handy shorthand for a more ecologically friendly way-of-life by collecting waste and processing spent packaging into new materials for use instead of doing so out of virgin substances, it also contributed to recycling confusion among consumers, albeit unintentionally. And then there's the matter of recycling simply not working. Today, the US recycles just two-thirds of paper products and about 8% of plastic, statistics that highlight a barely-functioning system.

For all the unintended consequences, however, the recycling symbol demonstrates the power designers have to nudge humanity towards sustainable behavior.

For all the good intentions the CCA had, the recycling symbol became a tool of plastic lobbyists looking to stave off perceived threats to their industry by creating confusion over recycling. Perhaps Anderson’s recycling symbol now represents the most pertinent fact about recycling itself - it’s fundamentally broken. Rather than something which represents a continuous, unbroken loop—the very promise of a circular economy—became a series of arrows chasing after themselves and going nowhere.