Whiskey is a spirit traditionally distilled and aged in oak wooden barrels that can be either toasted or charred to help determine the flavor profile. Based on the whiskey you'd like to create, there is a sea of other factors such as wood grain, time, water, and geography or climate to take into account.

While conventional wisdom and longtime whiskey drinkers assert these factors are paramount to creating a fine whiskey, there's a San-Fransisco based start-up who believes otherwise and has taken it upon themselves to produce the equivalent of an aged whiskey overnight.

Founded by Alec Lee and Josh Decolongon, Endless West considers the guiding principles for creating an authentic, aged whiskey—there's passion in the craftsmanship, and satisfaction behind every sip. With this in mind, they've created Glyph, the world's first molecular whiskey, a four-step distillation process. 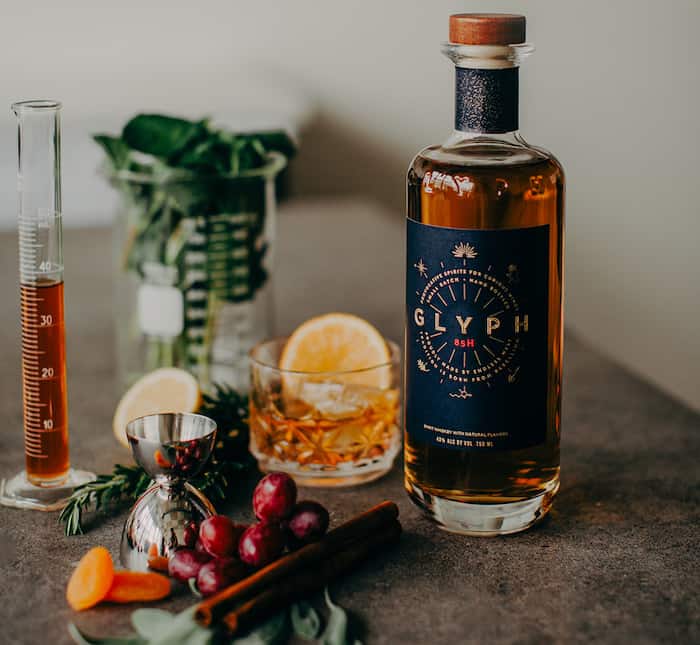 First, they designed the flavor profile, aroma, and mouthfeel for Glyph and identified the notes that could produce the characteristics they sought. Second, they gathered molecules from said resources, like acids found in citrus, and sugars found in corn and cane. Third, they blended the ingredients with a corn-based neutral and hand-bottled each jar at their studio themselves. The fourth and final step is to sip, share, and enjoy the medium-bodied pale amber whiskey that offers an aroma of sweet vanilla, caramel honey and roasted hazelnuts they created in a single day.

Since the product's launch in 2018, there have been mixed reviews on whether or not you can recreate the molecules found in aged whiskeys, or if Glyph has just created a whiskey-alternative. Of course, it all comes down to your palate.

Or, if you’re like me, it all comes down to the label on the bottle as Glyph hit the designs out of the park.  Bottled in a clear bottle with Glpyh debossed directly beneath the neck and a clean, black label with gold foil located in the center, it's a treat for the eyes. As you take a closer look, the copy entrances you with phrases like, "provocative spirits for curious minds" and "tradition is born from rebellion," while you simultaneously seek out the meaning behind the symbols. A few are a given, as the horizon on the top and the compass pointing West pays homage to the parent company, Endless West, while the molecular structure on the bottom is a nod the creation of the spirit itself.

Regardless, science is amazing. Refined tastes or not, that you can create a bottle of "aged" whiskey with just 24 hours in a lab is some seriously astounding stuff.