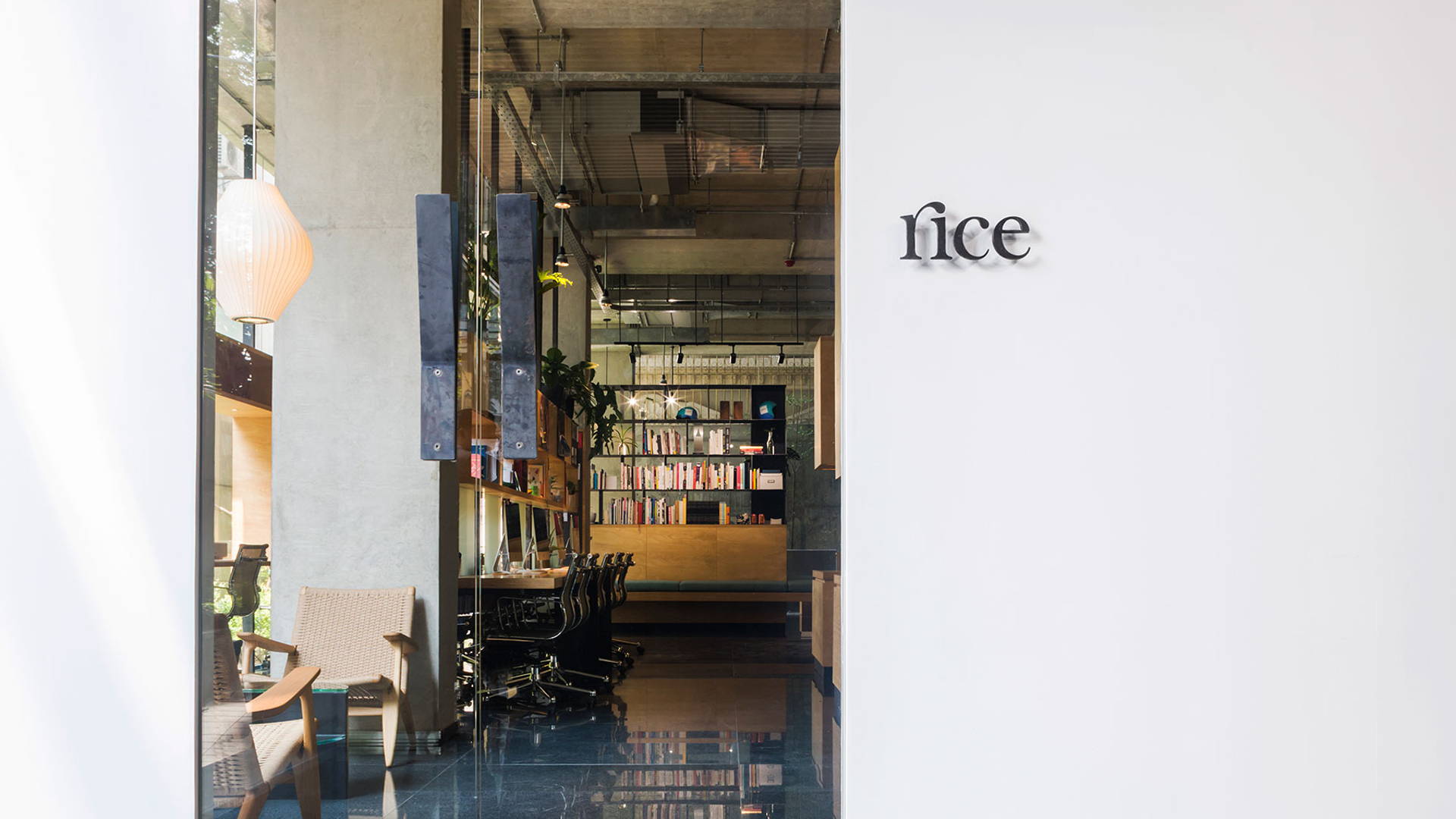 Inside the Studio: Rice Creative

For Vietnam branding and creative studio Rice, the move into their new Ho Chi Minh City studio last July offered them the chance to work in a completely new way.

“The new office we got to do from scratch,” co-founder and co-creative director Joshua Breidenbach says. “What we felt like we needed was for everyone to be together in one room surrounding the work.  There are boards of work up in the center and that’s connected to our production area. We centralized the work so everyone is seeing what’s going on all the time and that really ramps up critical comments.”

“We have a small meeting room,” Rice’s other co-founder and creative director Chi-An De Leo adds, “but everything else is very open.”

“We trusted the architects (HTAP) we worked with to come up with something great,” Joshua says. “Being designers we know you have to have faith in a designer. But we basically said we need a meeting room and a production area. After years of working in a dysfunctional space, this is what we know we need and they went from there.”

“It was a nice office, Chi-An say, “but we had three separate rooms and two floors.” They were housed inside a 60’s modernist building, and while they had great views of Saigon, there was a noticeable disconnect between the team. Having to constantly go up and down the stairs never felt good, and the team mostly felt segregated from the inner-workings of the studio, nor did they feel like they could enter the meeting room where the directors typically sat.

“We wanted really badly for the new studio to be on the ground floor,” Chi-An says. “It gets us more into the city, and we are also in the neighborhood we wanted. Da Kao is up and coming with lots of small cafes, bars, and shops. That's great for the team too because before we were in more of a tourist area.”

The 1,330 square foot space is the perfect size for the studio and their staff of 20. There’s a library-like quality to their new digs, with everyone working throughout the open space. Plus, with one half of the office ostensibly being glass, there’s an incredible amount of light pouring in.

“Having a lot of light was crucial to us,” Joshua says. “We try to keep everyone as happy as possible at all times.”

Outside of the small greeting area, you notice that there’s a great deal of storage which has been modeled after Andy Warhol’s archiving system (though thankfully not as grand in scope as Warhol’s was said to contain nearly 600 standard-sized cardboard boxes spanning some 40 years). Throughout the office, there are different material libraries and uncluttered storage spaces, a necessity as the previous office offered none whatsoever. There’s also the bookshelf library which not only offers another organizational fixture, but it gives the creative directors their own little nook.

The meeting room is one of the highlights of the studio with its light-up conference table that also doubly functions as a dry-erase board.  “It’s like the war room in Dr. Strangelove,” Joshua jokes. “We didn’t ask for that, but the architect said you need that. There was no convincing necessary.” Often, they’ll draw up ideas with their clients at the table, but they can also display work throughout the room by either stacking them on shelves or magnetic strips.

For Chi-An and Joshua though, they most enjoy being in the centralized production area of the office which they typically use for meetings or crits, but they also have the added bonus of having perhaps the most extensive paper library in town, stocked with great stuff from Neenah and others. One of the clients they’re doing branding for, Rooster Beers, has been kind enough to provide them with a keg at all times, a nice little bonus for when Friday afternoons roll around and the team wants to unwind.

“Ho Chi Minh City is inspiring and fascinating,” Joshua says. He and Chi-An weren’t thinking opportunistically when they started Rice, but it turned out to be a great business decision.

“The market was just starting to need that service, Chi-An says. “As an emerging country, there are a lot of little businesses that need good branding.”

“We were seeing branding being done so poorly at big agencies,” Joshua says. “It was alarming because you could see culture disappearing and we were extremely motivated to use branding as a massive tool to potentially affect millions of people.

“We can have an impact,” he adds. “Let’s show people how to do it thoughtfully and carefully in a way that can improve conditions whether it’s for our clients or for groups of people that need help.” Recently, Rice worked with Unicef to help raise awareness and money for Vietnamese children in need of support, where some 3 million don’t have access to clean water.

While Rice is considering opening additional offices in Paris and New York, their future, Chi-An says, is continuing to be a dynamic presence in Vietnam while also helping the country to build a strong, creative community.

“We’re constantly discovering things about this place and being really inspired by it,” Joshua says.

These Colorful Spirits Are Sure to Catch Your Eye