The World Needs A Toy Store

There’s a magical moment in the movie Big, and it’s the one you know I’m going to write about, the one you’ve seen hundreds of times, the one they’ll play ad nauseam when Tom Hanks buys the Hollywood Forever Cemetary Farm, because you can’t talk about FAO Schwarz without bringing it up.

Hanks and Robert Loggia stumble across an enormous floor piano, and we watch them dazzle us with a rendition of “Heart and Soul” and “Chopsticks,” staples for any kid who suffered through piano lessons. By the end, Loggia claps him on the back and enthralled by the 12-year-old-in-a-30-year-old’s-body, and his sense of childhood wonder, Hanks becomes a vice president at Loggia’s toy company.

There’s a lot more to the movie, but for our purposes, that will do. It’s a moment of pure movie magic, one that you can’t help smile at and be utterly transfixed by as they leap across the piano without missing a note.

And it all took place at FAO. For many children visiting New York City, it was as essential a stop as Rockefeller Center and Radio City Music Hall, something so deeply entrenched in what we thought New York was (or so we thought in the 80s and 90s). In reality, the world is a much different place than the one we thought it was when we were children, and it’s something that Hanks’ character learns along the way.

Adulting is really, really hard, and though Hanks receives promotions galore and untold riches, we eventually figure out that moneyed, elderly toy titans don’t walk the floors of FAO. We all have to grow up. There are mortgages and break-ups, friendships end and some toy stores even close their doors for good.

FAO Schwarz shuttered the doors of their New York City location in 2015. Not long after, Toys “R” Us would file for Chapter 11 bankruptcy in 2017and would close all of their stores in the US and UK (locations in Asia and Africa were unaffected).

If you felt like you were missing something culturally, you wouldn’t be alone. Most retail experiences are conducted from our laptops and cell phones, with drone delivery and one-click ordering, sacrificing the act of talking with a real live human being all for the sake of convenience. 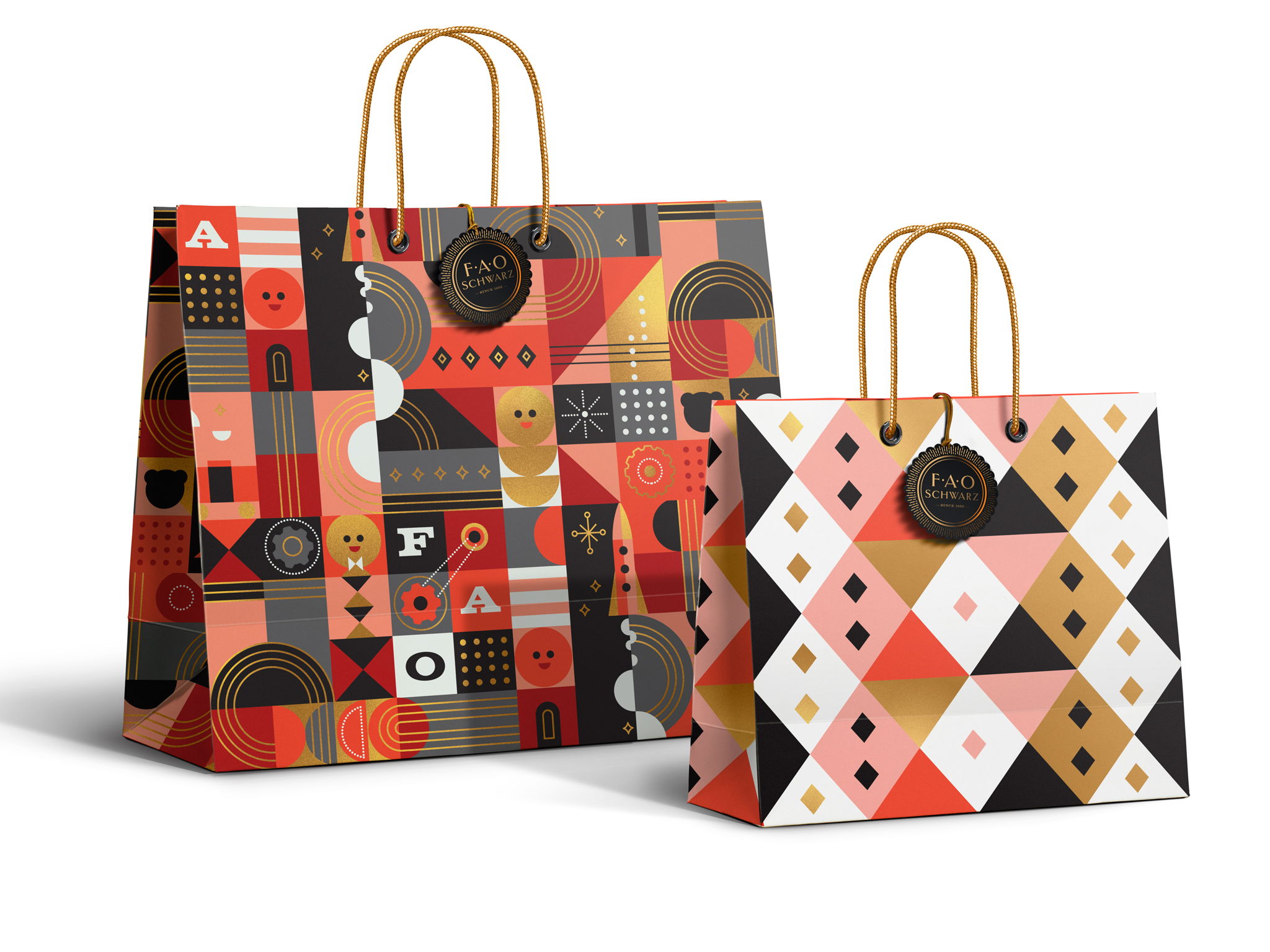 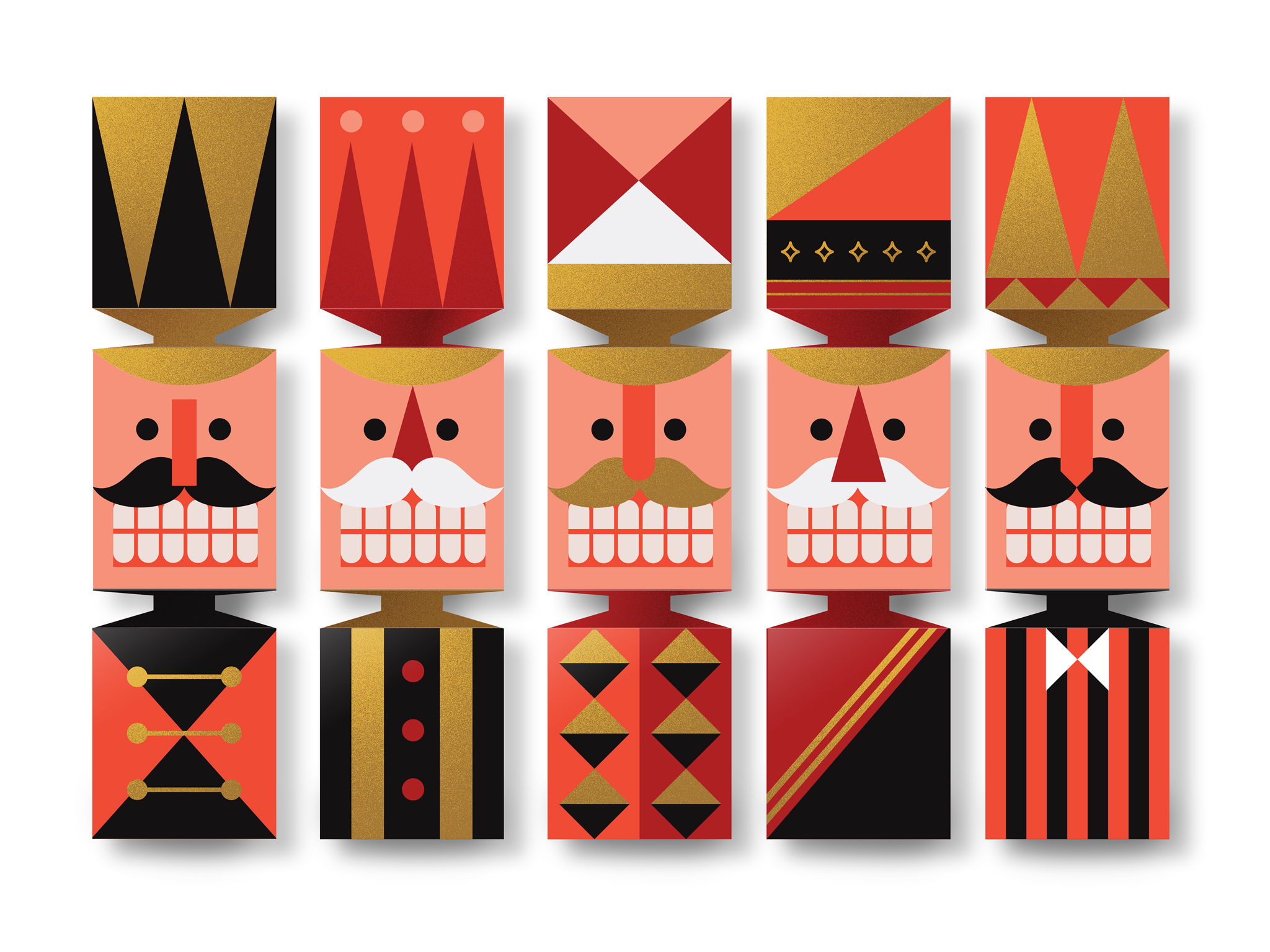 “All those things are really wonderful,” says Ty Mattson, principal and creative director of branding agency Mattson Creative, “but there is a loss there in terms of the experience of going outside and rubbing shoulders with other people from different walks of life.”

The company itself was founded in 1862 by a German immigrant and retailer by the name of Frederick August Otto Schwarz. “I think that that's an important thing to remember,” Ty says. “That this is a place for people from everywhere, and the idea of turning off your phone and maybe forgetting for a minute all of the conflict and bad news that we're used to seeing, and having an experience of feeling like a kid in a toy store—it resonates on a very deep level.” 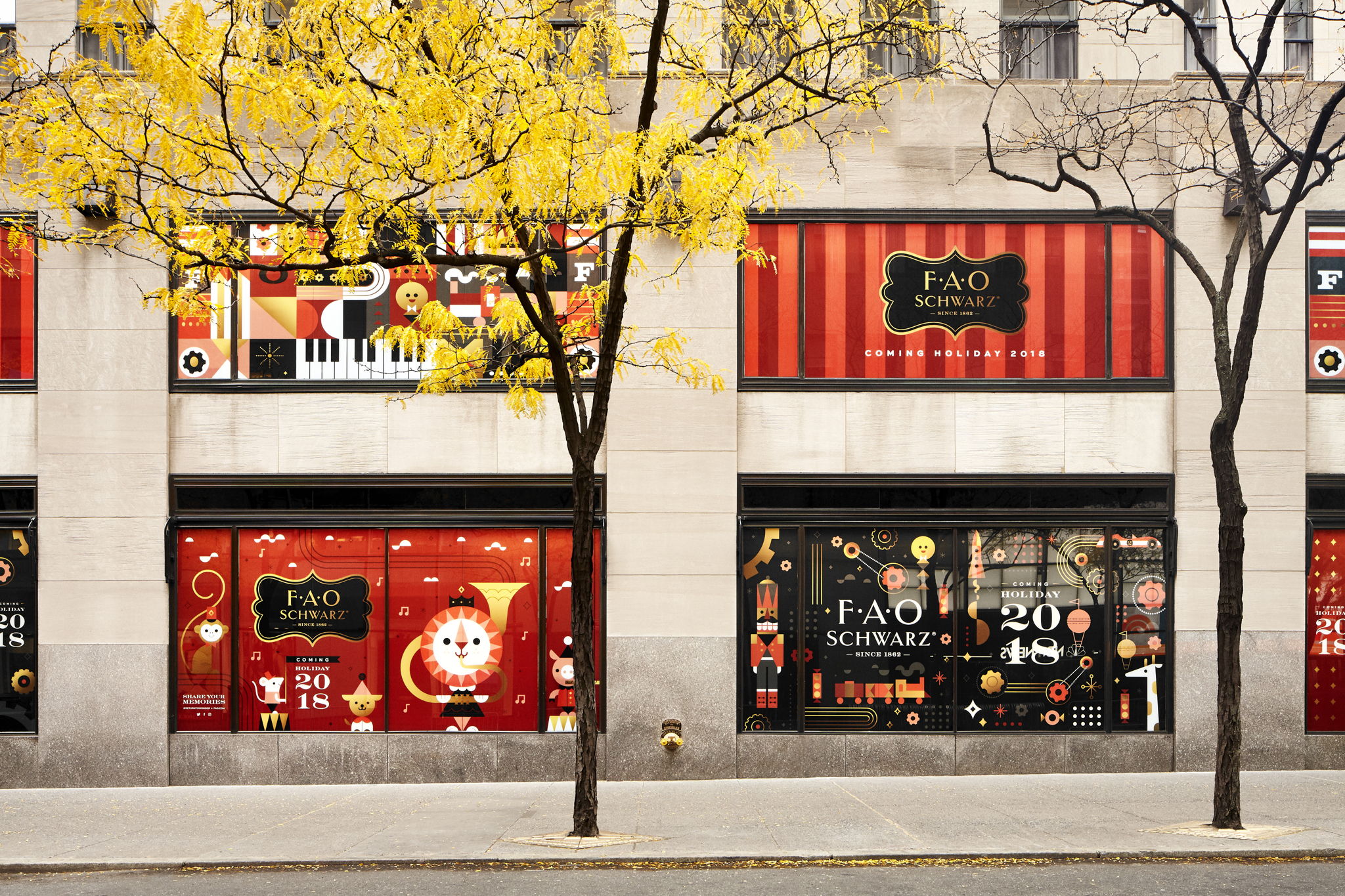 So it came as a bit of a surprise when FAO reopened their doors this past November at 30 Rockefeller Plaza just in time for the holiday season. After being purchased by the ThreeSixty Group, Mattson Creative was enlisted to help them revive the brand, a dream come true for Ty who can remember being ten and going to the iconic store when it was on Fifth Avenue. It was his first visit to New York City, a trip that for any child can be equal parts terrifying and alluring. 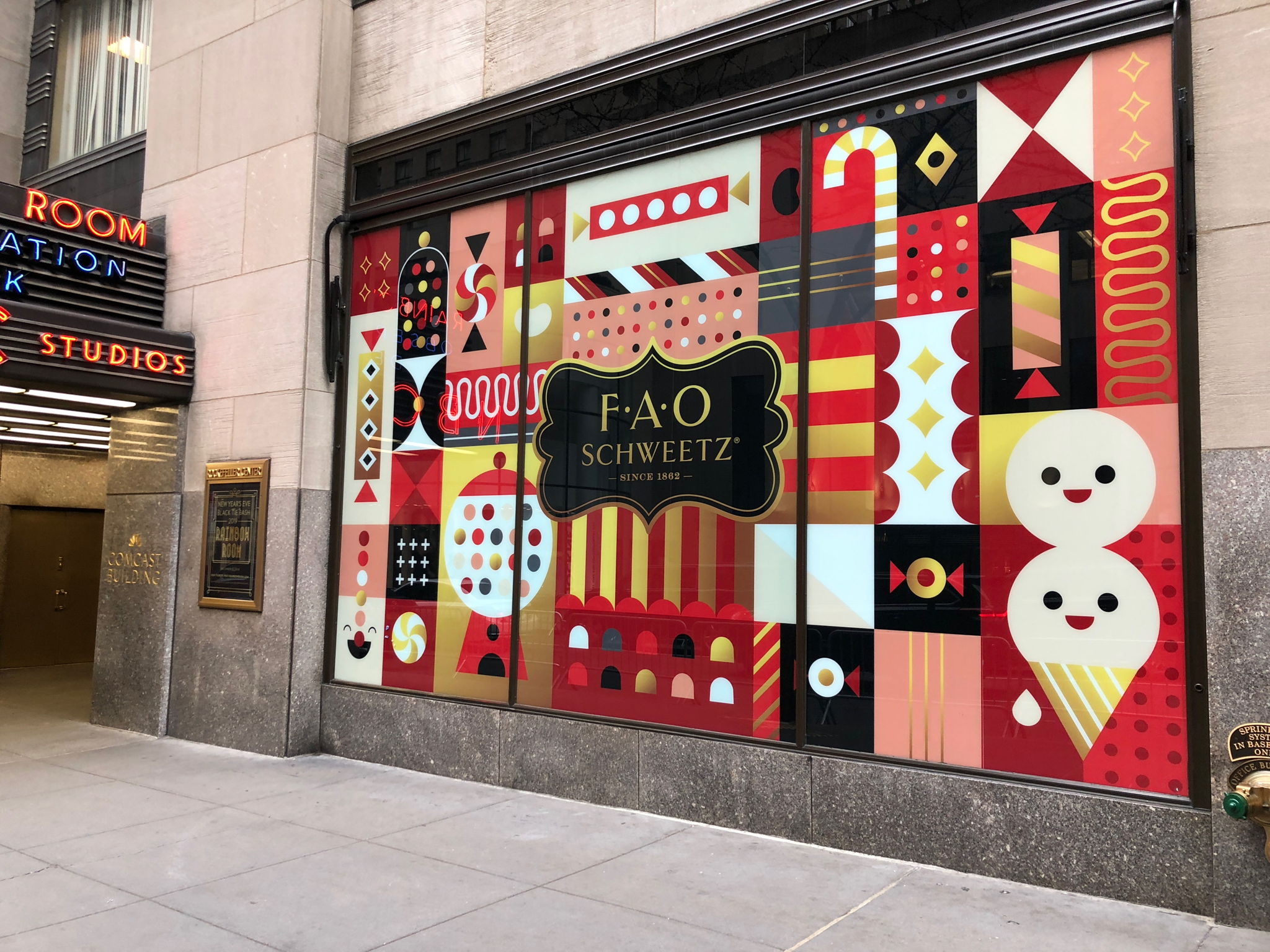 “Part of our positioning for the brand was that the FAO Schwarz toy store experience is intrinsically connected to the city of New York,” Ty says. “People understand the brand as a place, as a toy store. It was always important when we were redesigning the logo, and looking at the packaging for all of the different places that those products were supposed to go, that there needed to be a beating heart in New York City, in Manhattan. That was the heart of the brand.”

Not only did they want to play up the store’s Manhattan roots, but they also wanted to capture that feeling of awe and reverence you have for these hallowed places, no matter your age. And that was where their concept of “Return to Wonder” came in. 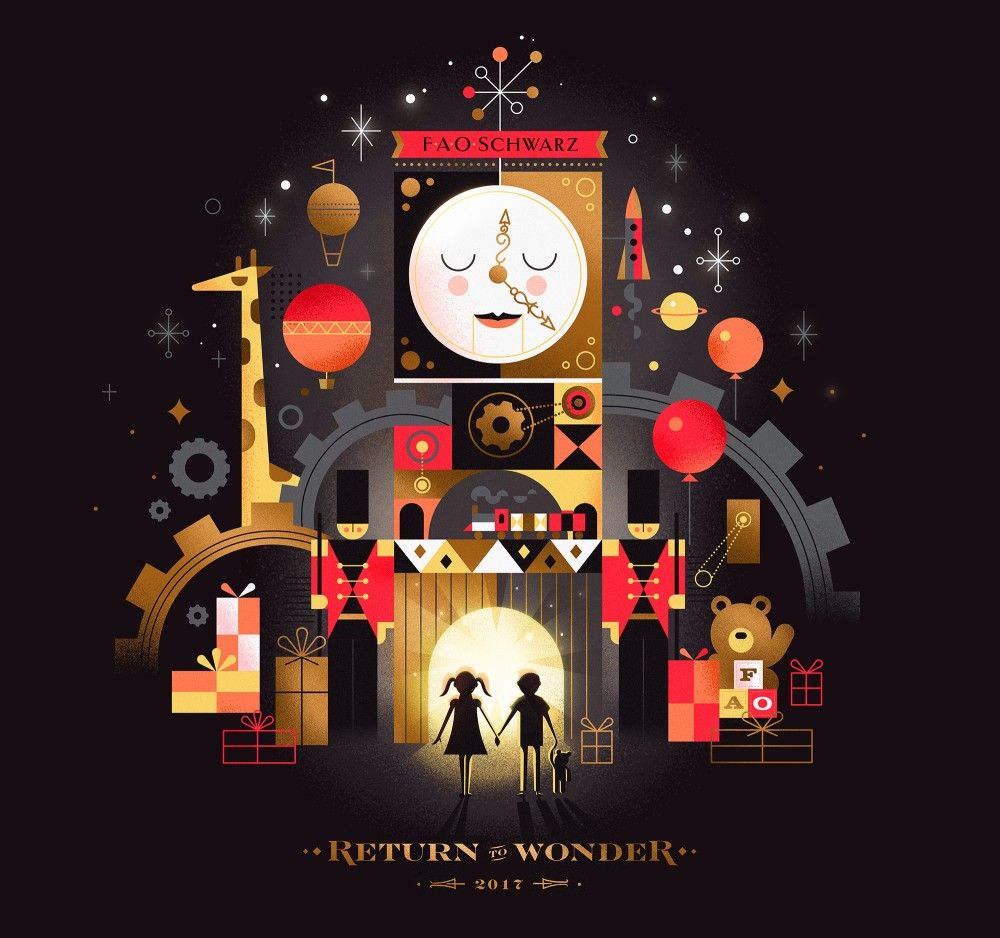 “The idea, for me,” Ty says, “is feeling like I felt when I was ten years old walking through the doors of this grand toy store and looking up and seeing this towering clock, hearing the music, seeing these toys, and having that experience.” In a way, the store itself becomes a sanctuary. For a kid, New York can be immensely overwhelming, and if you’re a tourist, you’ve likely been hopping around Times Square for the better part of a day, so the store ultimately becomes a reprieve.

Still, this is a toy company with a rich, storied history. “The brand could be very traditional, stately and sophisticated,” he notes. “I did want to sort of nod to that, but I wanted to tip my hat to it versus leaning into it. I think if you are going to revive or relaunch a brand, fundamentally, it has to be forward facing. You can have the history, but I think in this day and age it has to feel fresh and modern.”

The entirety of the visual identity system nods to the past but feels wholly contemporary while every piece of packaging has a wrapping-paper like quality. But FAO is more than just a logo and packaging, and Mattson consulted on aspects of the store design as well, sketching up fixtures like rockets, experiences and even costumes. 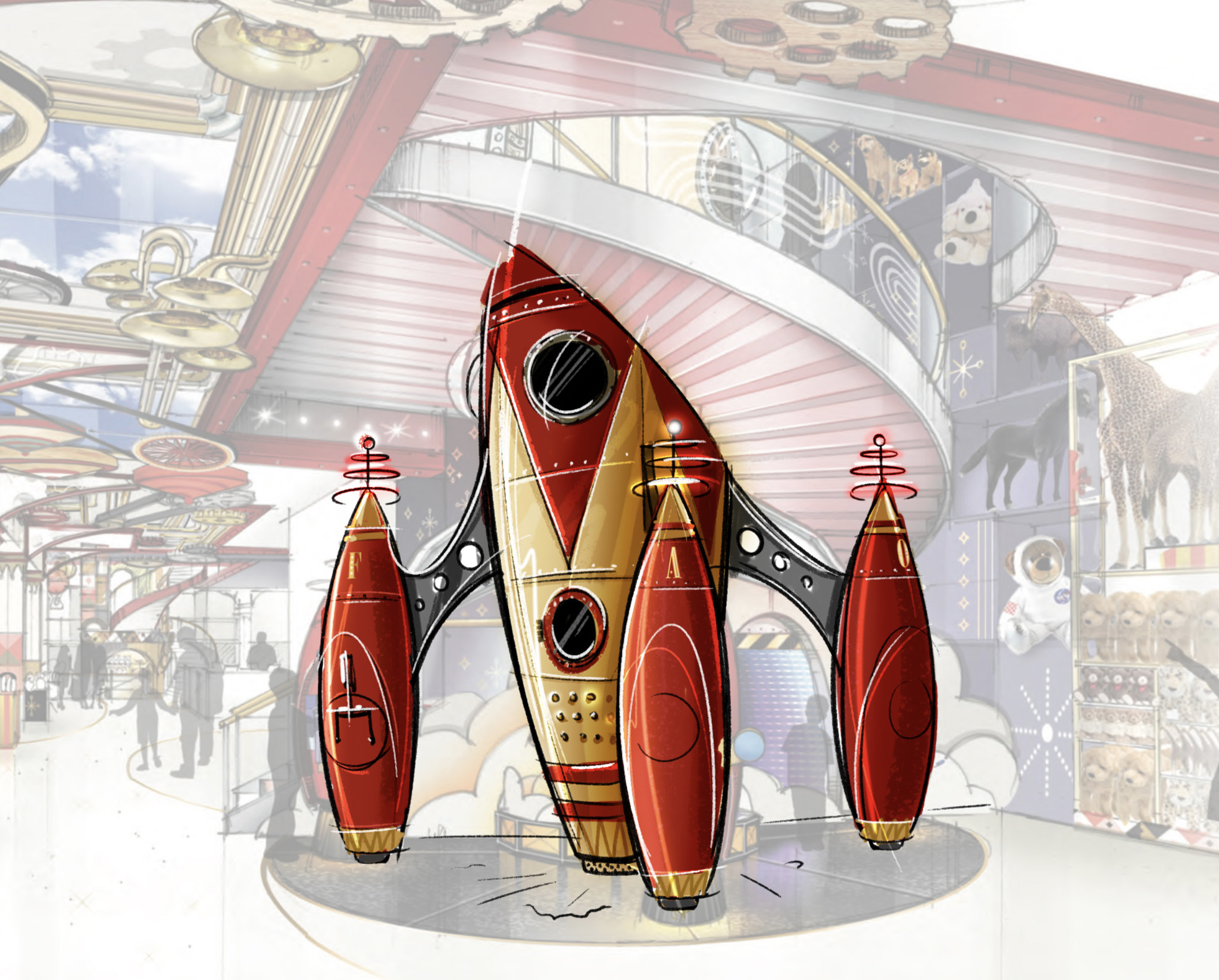 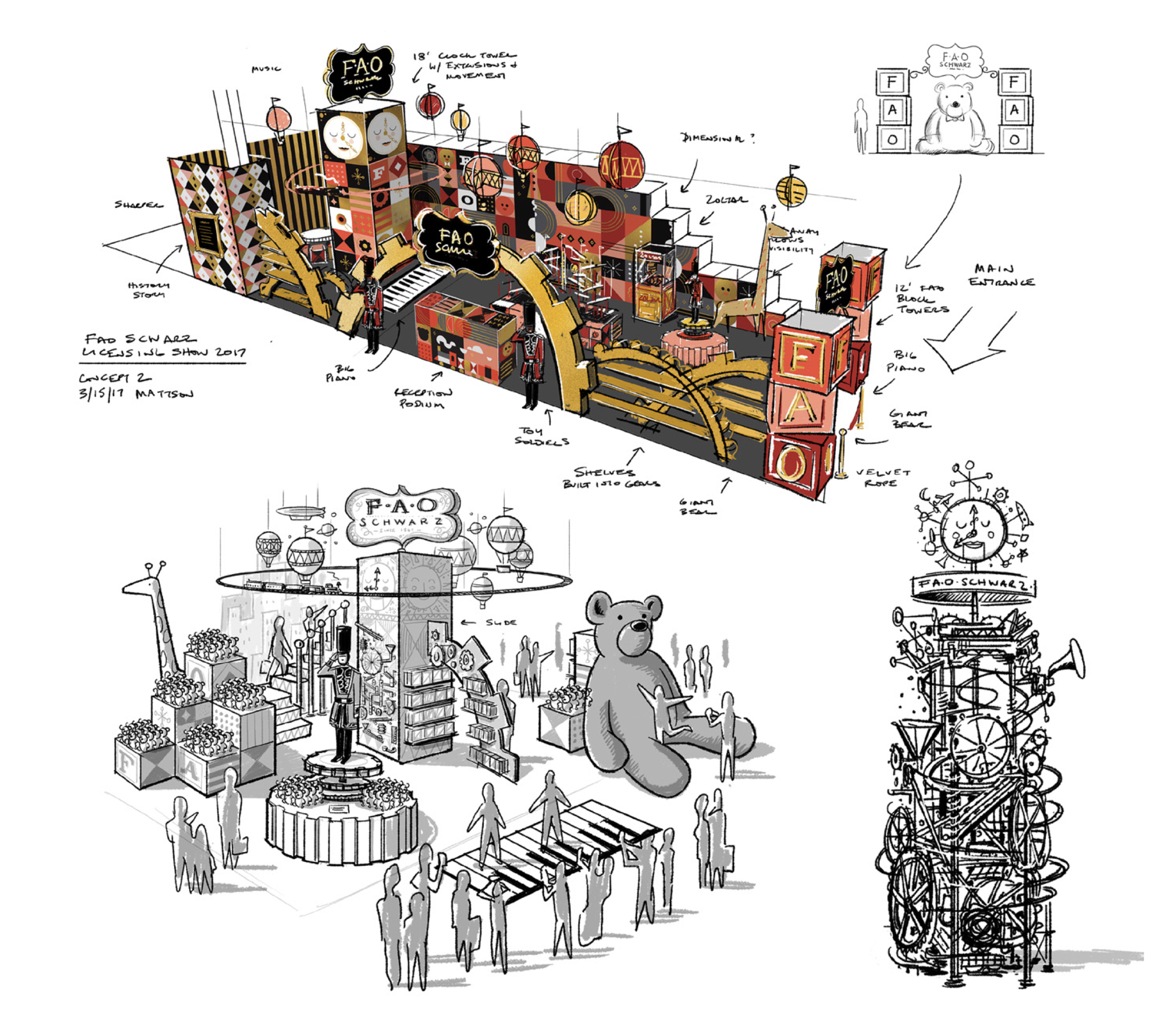 “On the 49th Street entrance, there is this really grand clock tower,” Ty says. “You can go into it on the first floor, and you can go around it.  On the second floor, you can walk up into it, and through it. From an architectural standpoint, it’s incredible."

"It's based on one of the initial pieces of key art that we designed for the brand," he adds. "It literally looks just like it. 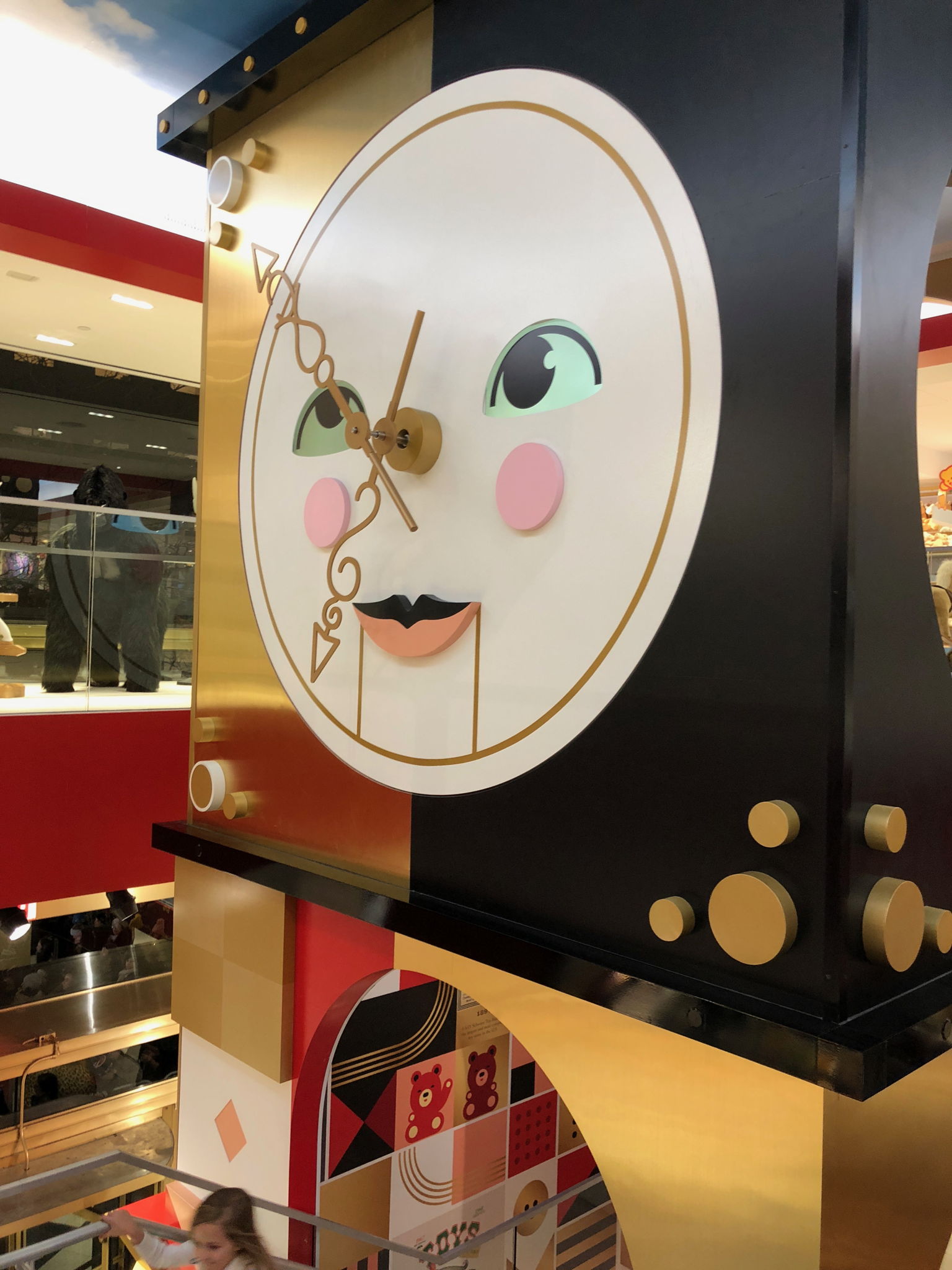 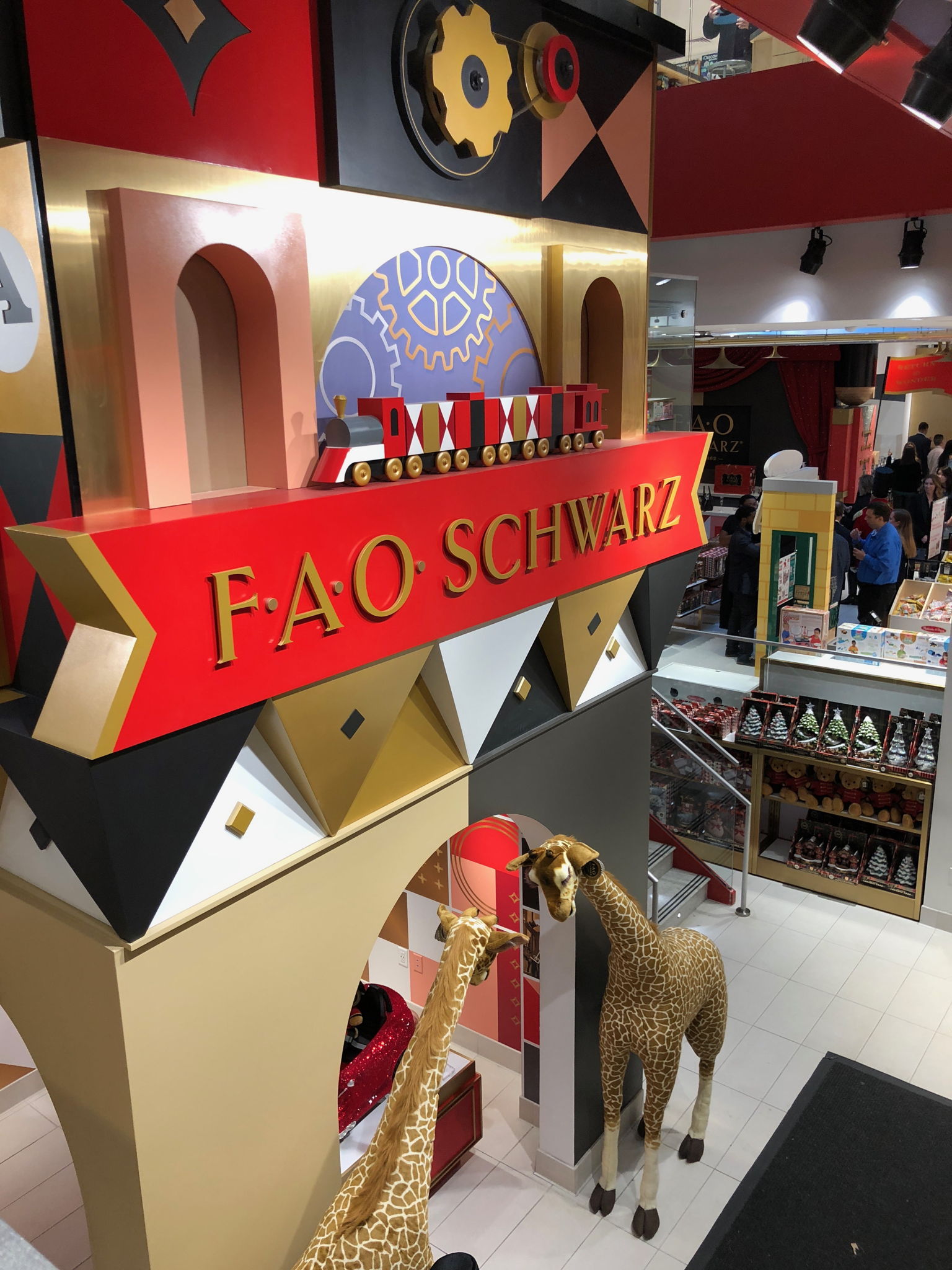 “I'm really doing the same thing that I was doing when I was ten years old when I first went to FAO Schwarz. I'm drawing UFOs, rockets, and robots and somebody else is building them and making them into real life things.” 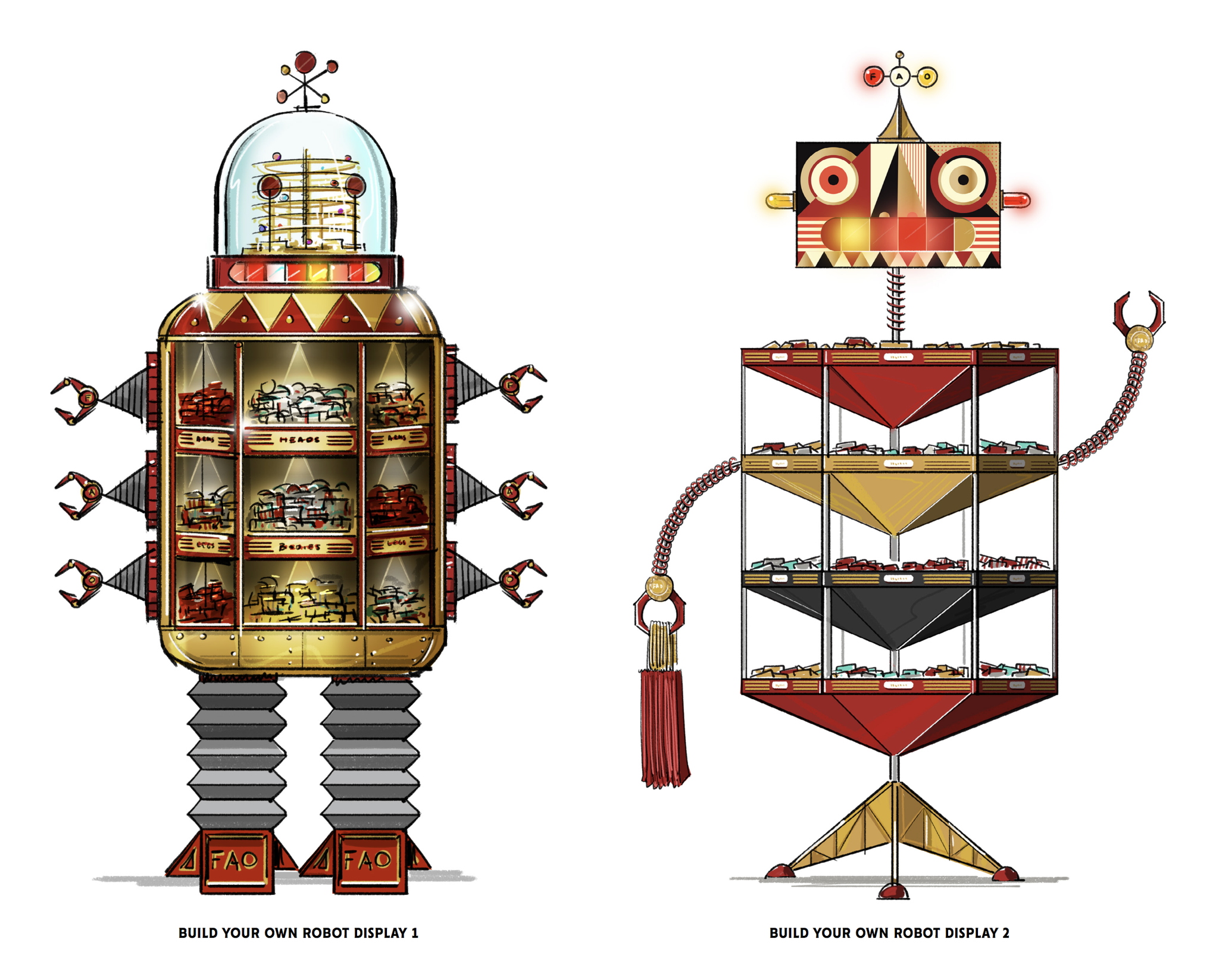 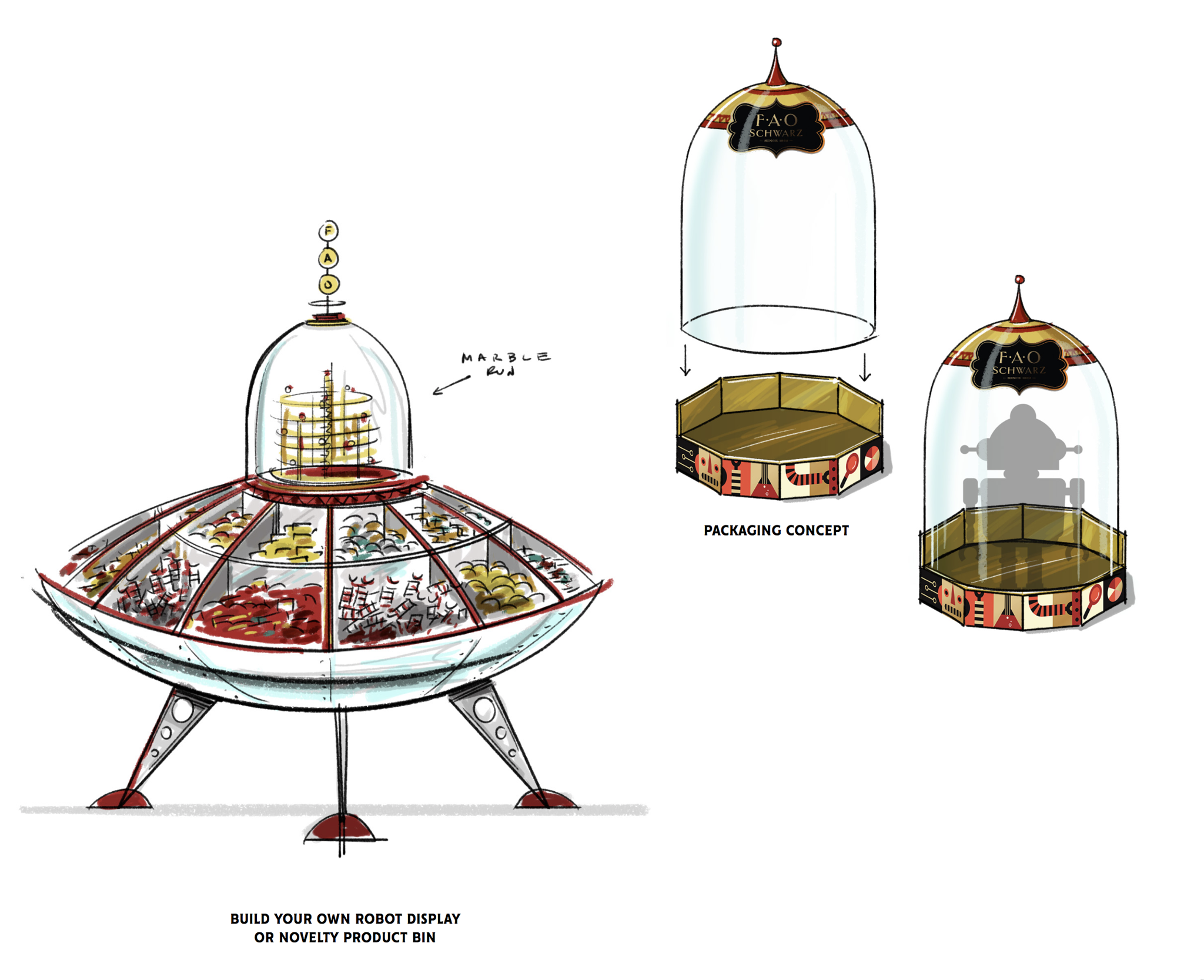 It’s hard to imagine anyone opening—or in this case, reopening—a toy store in this day and age. I can go onto Amazon right this very second, order a tube of chapstick, and have it delivered to my house within a few hours. Sure, it’s amazing I can even do that, but it’s an otherwise unremarkable purchase. When retail becomes something that’s highly curated, a destination you have to experience firsthand, that’s something you cherish always.

“There was a transaction that's always been associated with FAO Schwarz that is more than whatever toy or product that you may have purchased there,” Ty says. “It's a similar experience, I think, to a theme park or going to the theater. You walk away with something that's inspiring on a deeper level than just the commercial experience. So I think when that store closed there was a collective sense that there was something lost that was important.” 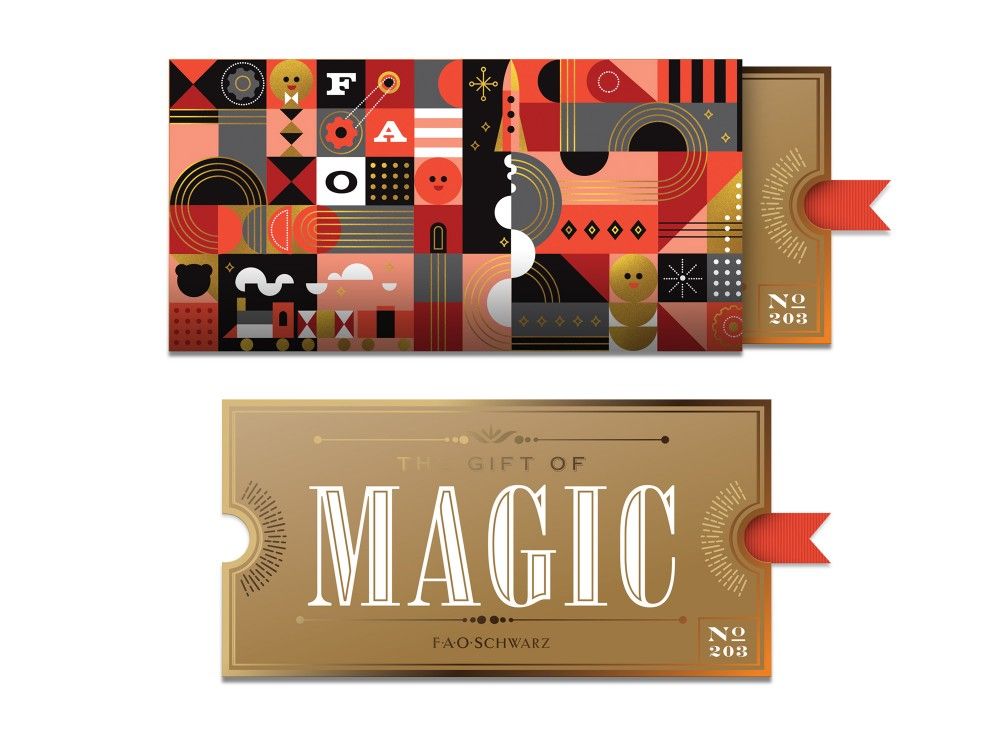 So while everyone continues to write retail’s obituary into the ground, there are still brands capable of creating everyday magic. Because a toy store is never just a toy store; there are dreams, and hope, and the possibility of all things as it connects us to our sense of awe and wonder, especially as we grow more and more detached from one another.

So, yeah, the world can really use a toy store right about now. And it’s OK to be a kid again, no matter how old you are. 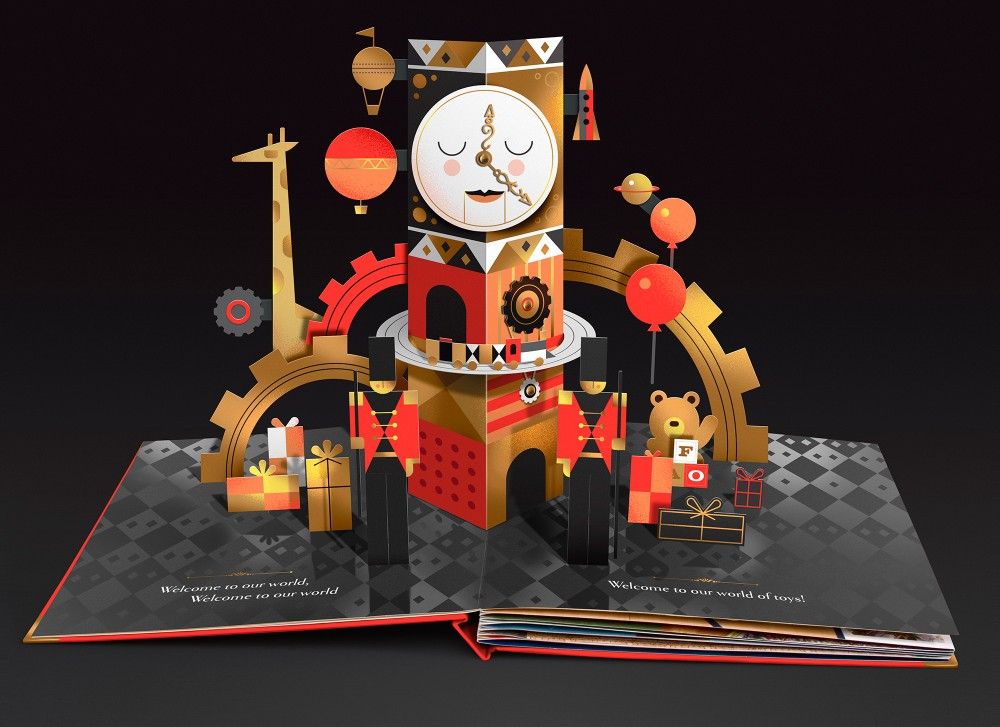