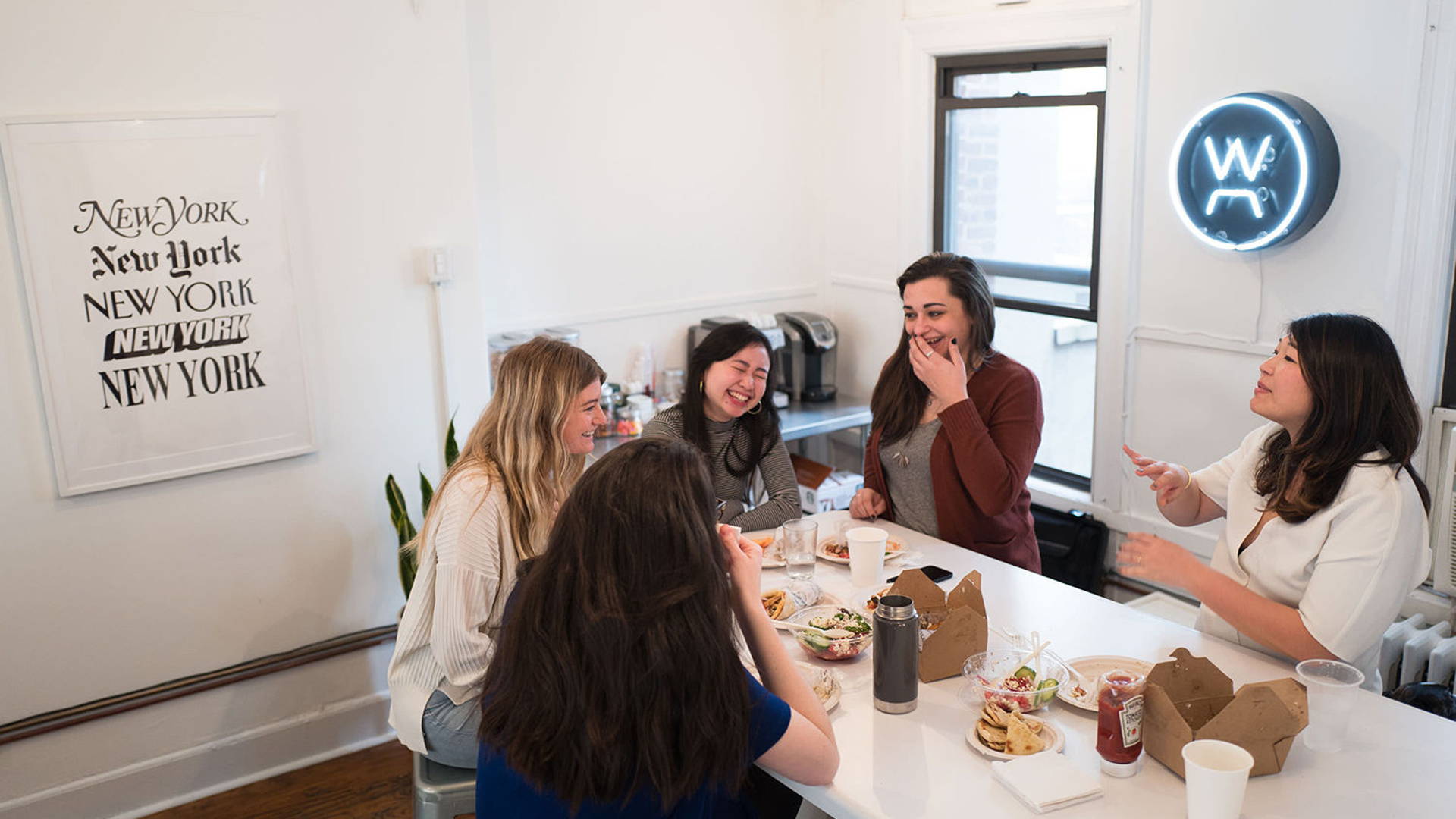 Jolene Delisle and Lawrence O’Toole spend a lot of time together.

Not only are they married, but together they founded branding agency The Working Assembly (TWA). Since 2014, their agency has been a trusted ally for both startups and companies with a storied history.

Jolene and Lawrence met in Philadelphia through a mutual friend that thought they would hit it off because they were both designers—which, to be fair, is also like saying, “You both like food, you’re perfect for one another!” But to hear them tell it, starting a business together was perfectly natural.

“It’s an interesting dynamic to work with your partner,” Jolene says. “Our business is such a passion for us. It works really well because it touches everything we do. So there’s really no separation.”

“We both have an entrepreneurial spirit,” Lawrence says. “We both come from that background where we’re always freelancing or working on a passion project. It just made sense to take that to the next level.”

While Jolene was working for an advertising agency and Lawrence was a design director, they were approached by a friend that was working for a startup who needed help coming up with a branding strategy. From there, they were recommended to other companies and TWA began to grow organically. Soon enough they were working more on their side projects than they were at their full-time gigs. And that was when they made the leap. Lawrence was the first to leave his job and Jolene worked on TWA projects in the evening. But as more and more recommendations came in, they had to start hiring help and Jolene eventually left her advertising gig.

“We were very lucky in that we had the opposite problem people have when starting a company where we had a lot of clients,” Jolene says. “At that point, we had to fully form to really service them.”

While TWA has a wide range of clients like Marriott and Urban Outfitters, they say there’s a great deal of satisfaction that comes from doing the type of end-to-end branding they specialize in. Every client relationship is unique in its own way, but the feeling of trust that comes from collaboration with such a new and energized group is precisely what makes them thrive.

“With larger projects, you certainly get a lot more visibility,” Lawrence says, “but you can really see the needle shifting when you’re working with a small tight-knit group. You can see the impact on their business and how that radically helps them.”

Their Future is Female

One of TWA’s first clients was theSkimm, a newsletter that rounds up the day’s top stories. It had huge success and has been praised by the likes of Oprah Winfrey and Shonda Rhimes. Through TWA’s relationship with theSkimm, they’ve been referred to other female funded and female-focused companies.

In fact, 80% of TWA’s clients are from female-run businesses like Kin Community and organic tampon maker Lola.  “There’s just a natural likeness,” says Jolene. “It very analogous to what we’re building.” The connection they’ve been able to establish, that sense of shared purpose with other female-led businesses has been essential to their success.

More than half of TWA’s staff is female, an asset they draw upon to connect with their target audience. Being a female and minority-owned business, they place a great deal of emphasis on diversity and inclusion when it comes to recruiting. There is a very real gender divide in the design industry—70% of graphic design students are female, but only 11% are creative directors. Having a staff that is primarily made up of women isn’t the norm, but having greater diversity of thought is what makes a design agency work best.

TWA also has a built-in advantage when working with female-led companies whereas a male-driven design firm might experience a learning curve.  “It’s the projects that we enjoy, the products we consume,” Jolene says. “There’s a shorthand with us where we can naturally jump into a process very quickly and early because we are their target.”

Jolene also takes part is Jessica Walsh’s Ladies Wine Design where they talk about fostering creativity and cultivating female mentorship around design. Instead of being competitive with one another, Jolene wants women to really help and support one another when it comes to having a career in the design world - it’s something that Jolene has actively done by recruiting great female designers.

“We want to be the best,” Jolene says, “but that doesn’t mean other people can’t be great.”

Building Their Own Brand

“The growing point for us was realizing we are working 24 hours a day, 7 days a week,” Lawrence says. “At some point, in order to service our clients better and to have a good work-life balance, we needed to delegate and relinquish some of that control.”

Because Lawrence is very much a hands-on designer, he could hand off some of the managerial functions, whereas Jolene found her strength was collaborating with the client on brand strategy. “As managers and owners, we’re realizing where our strengths are and how we can balance that out with each other.”

As their agency has grown in both size and profile, early on they recognized that they needed to grow in a way that was sustainable. They started small by using a coworking space, and little by little they assembled their team, but they didn’t want to become a 20 person shop overnight. Yes, there were plenty of recommendations from clients and friends, but they had to really hustle those first few years and were averse to risk. Plenty of larger companies were knocking at their door, but they didn’t want to worry about the overhead down the road if things slowed down.

“We wanted to build a client base and build those relationships early on,” Jolene admits.

Big jobs can be great in the short term, but long term they have to make sense for the agency and its growth. “You have to set yourself up for success in a way that’s realistic and achievable,” Jolene says. It’s attractive for a young company to make a lot of money right out of the gate, but the work does have to get done.

Now, in their third year, they’re more focused on building their own brand and what they’re about as a company. They’ve even started booking larger jobs with huge legacy brands like Mass Mutual, a testament not only to their hard work but knowing when they had the capacity to meet a larger client's needs.

“One of the things that we subscribe to,” Lawrence says,  “is that design isn't necessarily a set style or a bunch of rules or patterns.”

Without any type of overarching agenda or an in-house style, TWA is very much a clean canvas for prospective clients.

“The work that we do is very driven by client collaboration. It’s with the client’s voice directly to the client’s customer, just elevated through the lens of design that we can bring to it. We’re very much agnostic when it comes to style. We listen to the brief and the project and where the client wants to go.”

“Consumers are naturally attracted to beautiful things,” Jolene says. “We’re all inherently attracted to design even though we might not think of ourselves as designers. I think that our clients are putting a lot more focus and weight on our services because they realize it moves the needle forward in terms of not only business success but also branding success.”

It’s a formula that’s paid off for their young agency. It’s easy to forget that they’ve only been around for three years, but by remaining lean in the early going, they’ve been able to hone in on key relationships while steadily growing their own brand. With a larger team in place, one where the staff is comprised mainly of women  (and is led by a female creative director), the Working Assembly’s future is female as they are now poised to be New York City’s go-to design and branding medium.

EXO Is The Protein Bar With More Guts