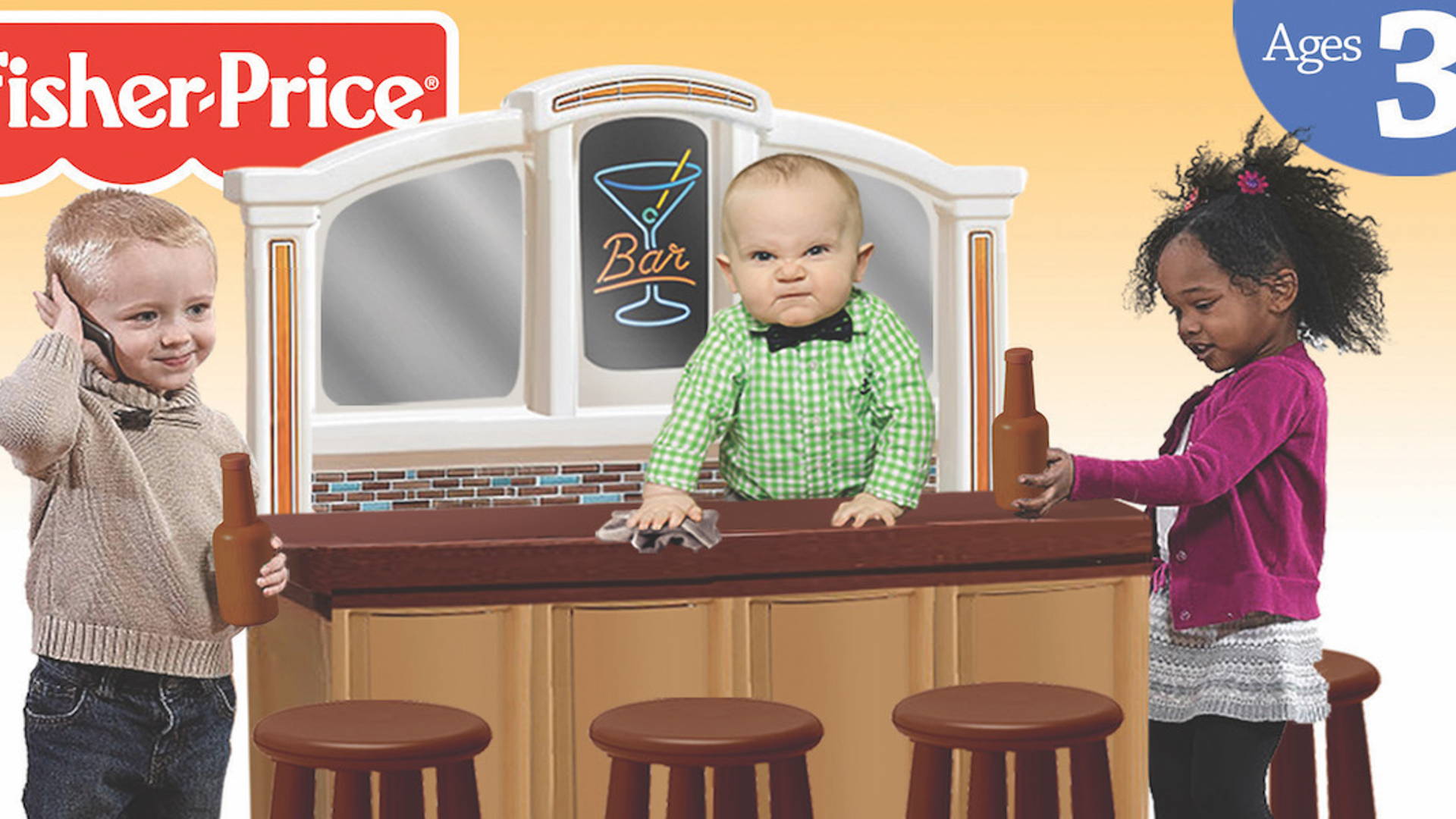 Forget dollhouses or kitchen sets—The Fisher Price Happy Hour Playset is the hot toy of the holiday season. Complete with bar stools and beer bottles, this is the perfect way to unwind after a tough day on the playground. Parents be advised: it’s not recommended for children under three.

Of course, the Happy Hour Playset isn’t a real product—but it made you look twice, didn’t it? Created by Adam Padilla, Branding Director and Co-Founder of Brandfire, this tongue-in-cheek playset was a meme that quickly garnered national attention after its posting on Instagram. We spoke with Padilla about why (and how) he created the packaging for this fake Fisher Price toy, what made it go viral, and the pros and cons of online content.

Tell us about where the idea for the Fisher Price Happy Hour Playset came from.

Adam Padilla: I am the branding director and co-founder of Brandfire, a NYC branding agency, so package design is very important to me. I also happen to run an Instagram meme account called @adam.the.creator, where I post original content every day. I was racking my brain for a new idea last Sunday night while playing with my 21 month-old daughter in my kitchen. I watched her run up to her play kitchen and shuffle the pots and pans around on the counter and thought it would be funny if a toy company were to market a pretend bar set to toddlers. I asked my wife, Willow, if she thought that would be a good meme to create, and she agreed.

So on Monday, during my lunch hour, I fired up Photoshop and created the package mockup. I posted it that afternoon and by the next day it had collected about 2,500 likes. By Wednesday, a friend DM’ed me to tell me that he had seen it on the news. When I searched it on Google I was completely stunned. It was a national story. I mean, local news outlets were covering it on the nightly news. It was on The TODAY Show. It had become a phenomenon! 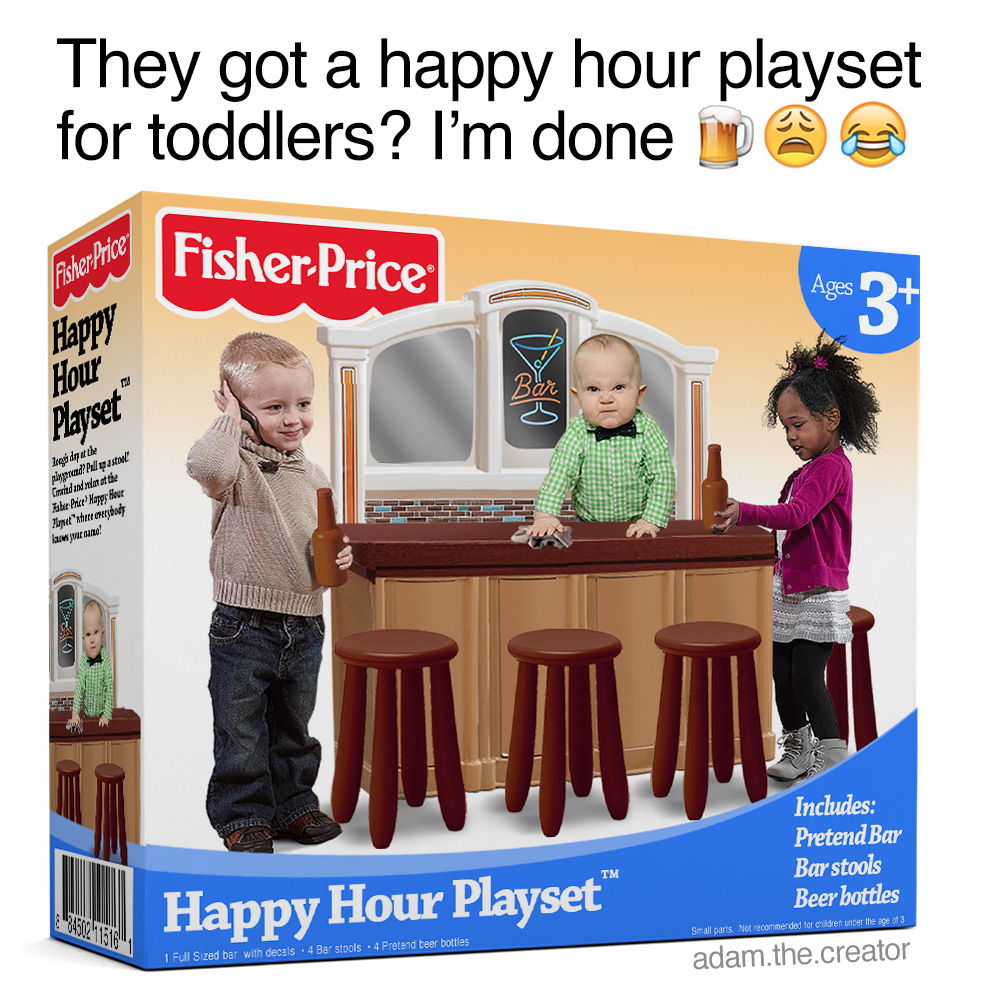 What do you think made the image so popular?

Adam Padilla: I feel like the image strikes the right balance of completely outrageous and sort of believable. It’s that tension that made people ask themselves, “is this real?” and that is what made it very sharable. People either laughed and shared it to make a friend or family member laugh, or they shared it in outrage because they couldn’t believe that a major toy company would release a toy that encouraged children to pretend that they were drinking alcohol. A popular Facebook account cropped out my watermark and reposted it, and that’s where it really took off. Reddit followed and before long it had aggregated tens of millions of impressions.

Understandably, there were some less than enthusiastic reactions to the Happy Hour Playset. What were some of the more unexpected responses you got to it?

Adam Padilla: Oh man, some people were outraged. I got a DM from a nice woman who was furious because she had alcoholism in her family and this was a glorification of kids drinking early. I saw comments from parents angry that the bar stools looked too tall and unsafe for kids. One of the comments was particularly upset that the kids were holding beer bottles and that was “the last straw.”

But there were also unexpected positive responses, like the parents who wished this was real! Many of the parents tagged friends with the simple words “we need to get this for our son,” which is so awesome.

I also got a message from the photographer that had shot the image of the baby “bartender” on the package. Her name is Holly Stark and she told me that she took the photo several years ago, posted it on Facebook like she always does but this photo went totally crazy. Someone had taken it and cropped her watermark out, too. It had been circling for years and gets edited into many memes but she says none that has gotten the attention that this one has! 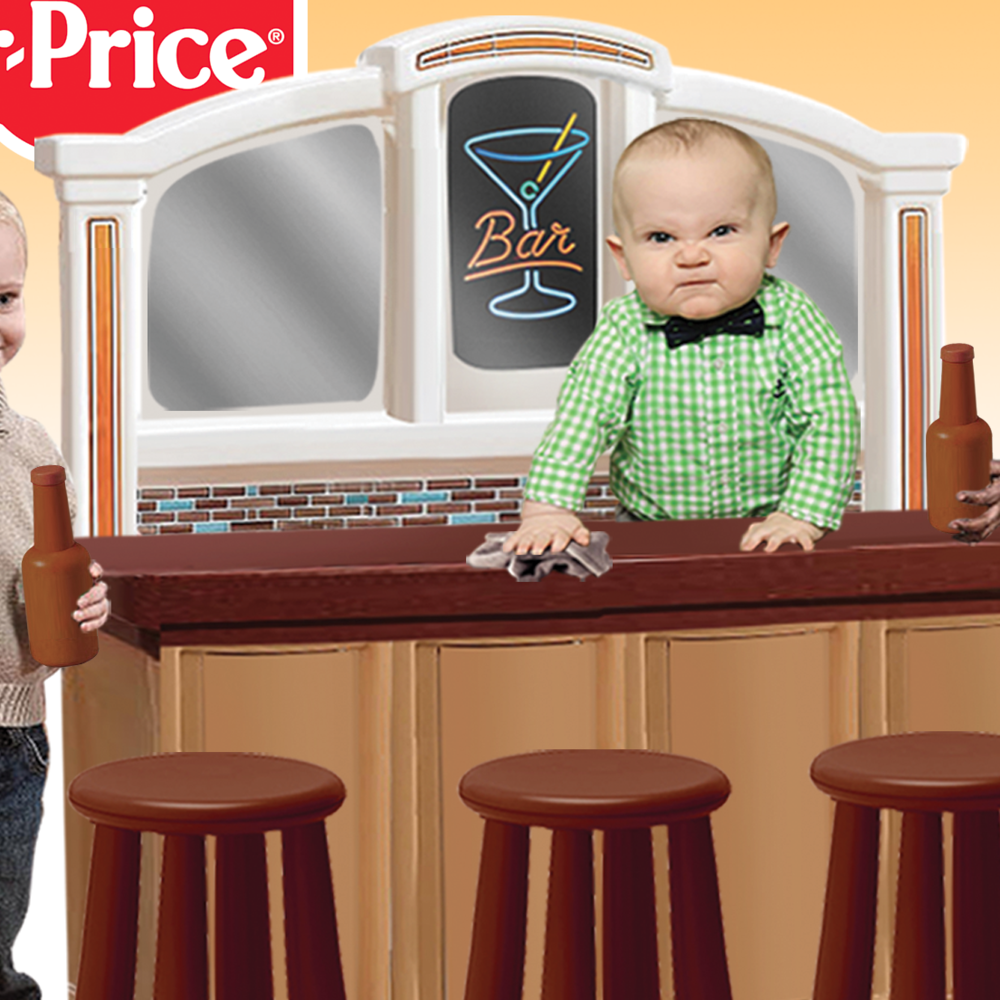 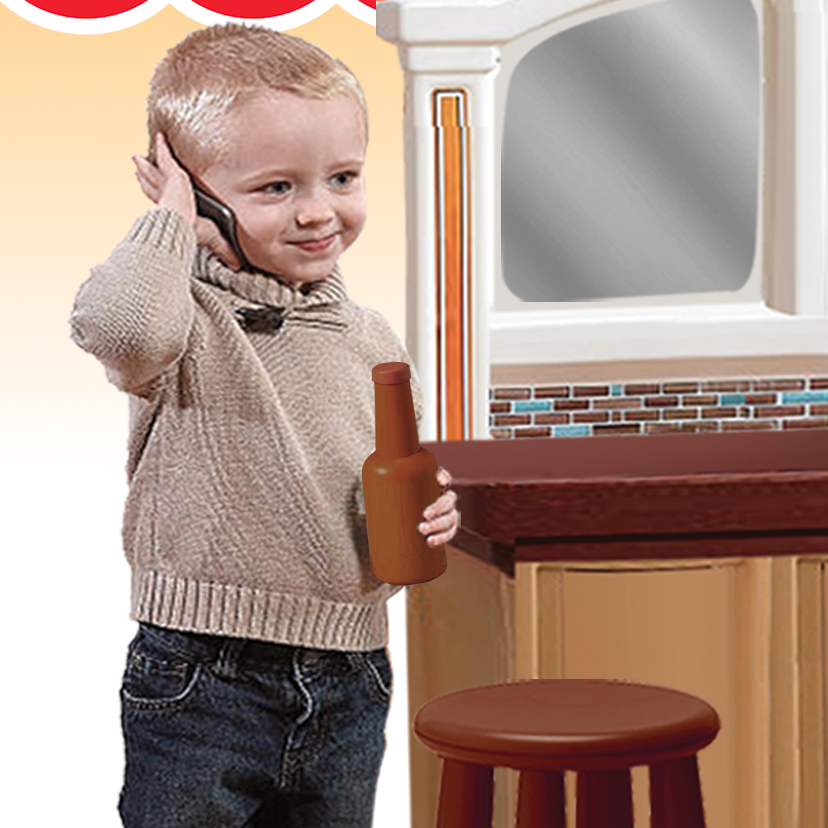 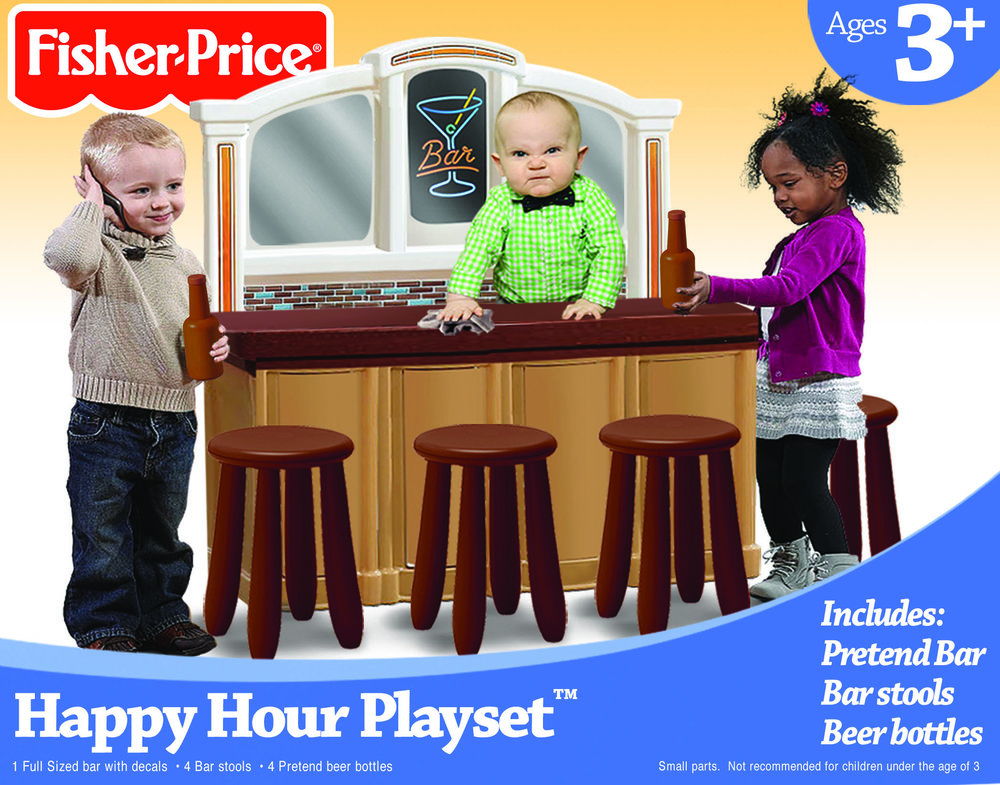 No one can deny that the image of the bar is insanely convincing! Although it's not a real product, what elements did you focus on to design packaging that would fit with the line of Fisher Price products?

Adam Padilla: Thank you! I took cues from original Fisher Price packages that depict a glamour shot of the product being used by happy toddlers. These images are never too busy, so I kept the composition simple. I created the entire product image first, and treated it like a real photograph even though every piece of it was completely fabricated from other similar playsets. The bar stools, for example, were created by elongating the legs of a pink plastic stool for babies and turning it brown. The bar itself was a kitchen counter that I extended to stretch the length of the product. The backdrop with “mirrored glass” was meant to replicate those paper decals that you always have to apply to these kind of toys. I even drew the mirrored effect by hand to mimic that style. The “bar” neon was found on Shutterstock and that put the icing on the cake.

As far as copy, I always love reading the romance language on these toys, so I wrote my own on the side panel. Most people don’t pick up on these details consciously, but they add to the sense of realism. I did receive a comment on my Instagram account where the girl quoted the side panel word for word! I was like “how did she even see that copy, it’s so small!” I even added the product contents copyline along the bottom, as well as safety information. I didn’t go pun-crazy or too silly. I kept it sincere and credible. I figured that the joke was the product idea itself, there was no need to pile on with goofy humor. I think the result genuinely feels like a product that may have been in development at some point before a company exec stopped the madness and said, “Wait… we can’t produce this!” 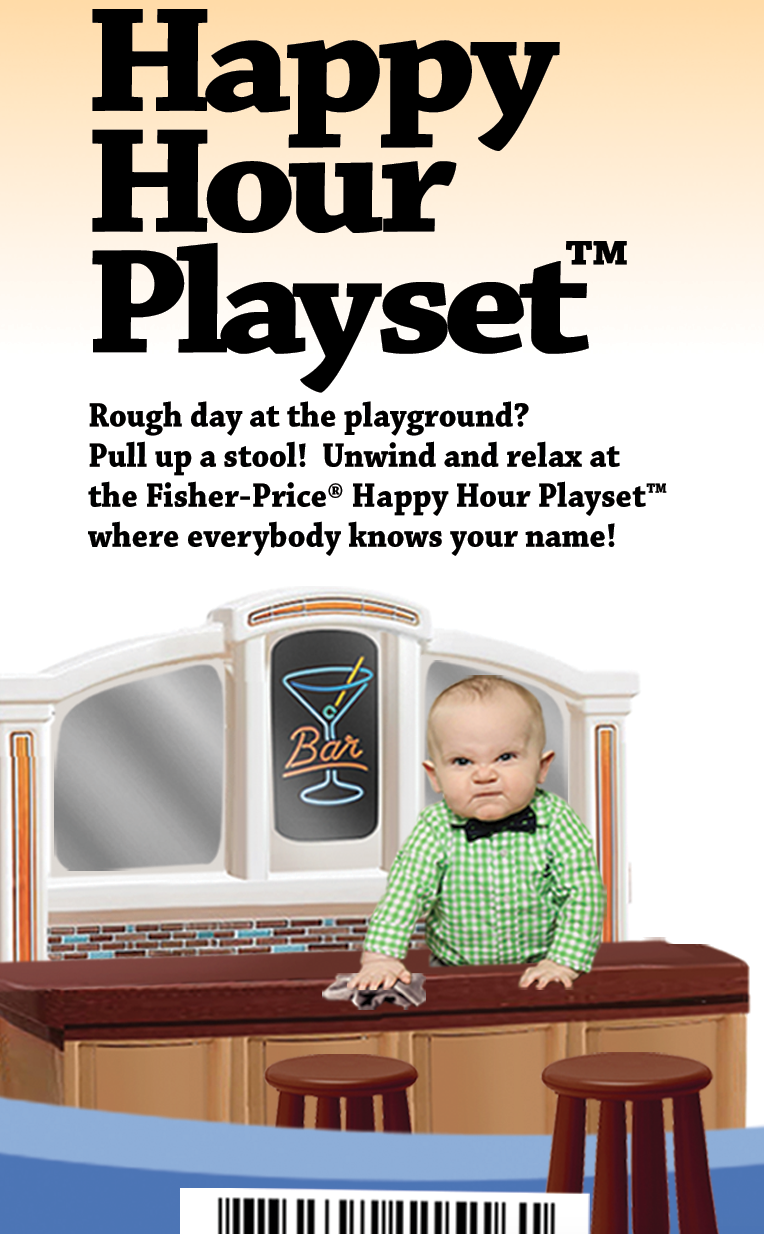 How did you share your work, and what outlets/websites/social media platforms seemed to be the most successful for getting it noticed?

Adam Padilla: I love Instagram and have had an account for several years now.  I originally began the account as a daily sketchbook of my illustrations and after completing two one-year sketchbooks began to shift over to memes and comedy, since that is really my passion. When I can combine art and comedy, I love the result. I have a close circle of “meme” friends like @black_humorist, @thedailylit, @highfiveexpert, and @tank.sinatra, and we love making people laugh and share our work. The integration between Instagram and Facebook helps one platform feed the other, and I have my posts share to Facebook automatically as well.  You never know where these things will be picked up so the more channels you post on, the better your chances of being seen and going viral. The irony is that the post didn’t dominate Instagram as much as it did the news media. It seems like Instagram and Facebook were instrumental in taking it far enough to get people to notice it and then when the news picked it up the story took on a life of its own.

You’ve mention two instances of watermarks being cropped out of images—your own and someone else’s. What advice would you give to those who put their content online to protect what they create?

Adam Padilla: Watermarks protect your image to an extent, but if somebody knows photoshop well and are really motivated, they can remove it no matter what you do. Case in point, a year ago I combined Jackie Chan and Channing Tatum’s face into “Jackie Channing Tatum.” The watermark was photoshopped out and wound up getting millions of likes on other Instagram accounts.

You really can’t prevent meme theft, and it is actually sometimes smart to leave your watermark off of your work so that it can be passed around more easily by people claiming it as their own. Everything always comes out in the wash. If you really created the work and post it before anyone else, people will ultimately trace it back to you. Don’t let fear of being credited prevent you from posting. Trust the system, many times your own followers will come to your aid and give you credit. 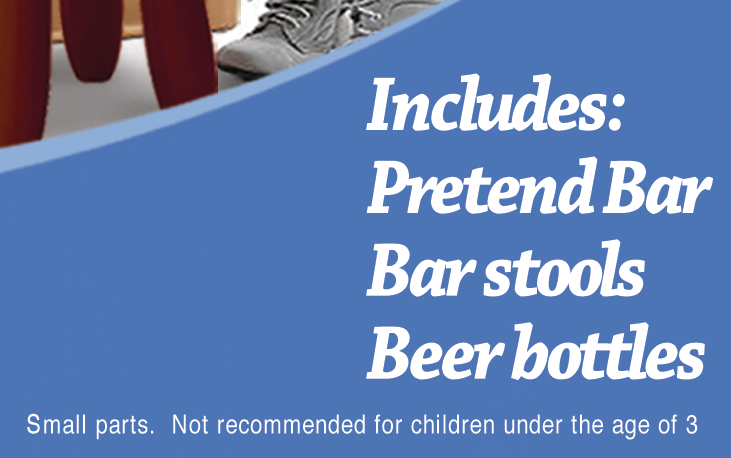 Because of internet and social media, images like this can be shared in an instant. What benefits (and disadvantages) do you see in this?

Adam Padilla: The instant nature of social media is a double-edged sword. The fact that work can be sent around the world so rapidly is great for businesses and for creatives, but also a challenge for people to validate. There are so many new news sources popping up that it is tough to discern whether the news is credible or not. You have to be very careful and not believe everything that you read. My prank was a bit of harmless fun, but many people have different intentions and are seeking to take advantage of gullibility. Fortunately, I do believe in the self-regulation of the people that comprise these social media channels and trust that they ultimately sniff out the truth at some point. If you get an email from a Nigerian prince, however, I advise that you don’t send them any money. I learned that the hard way. :) 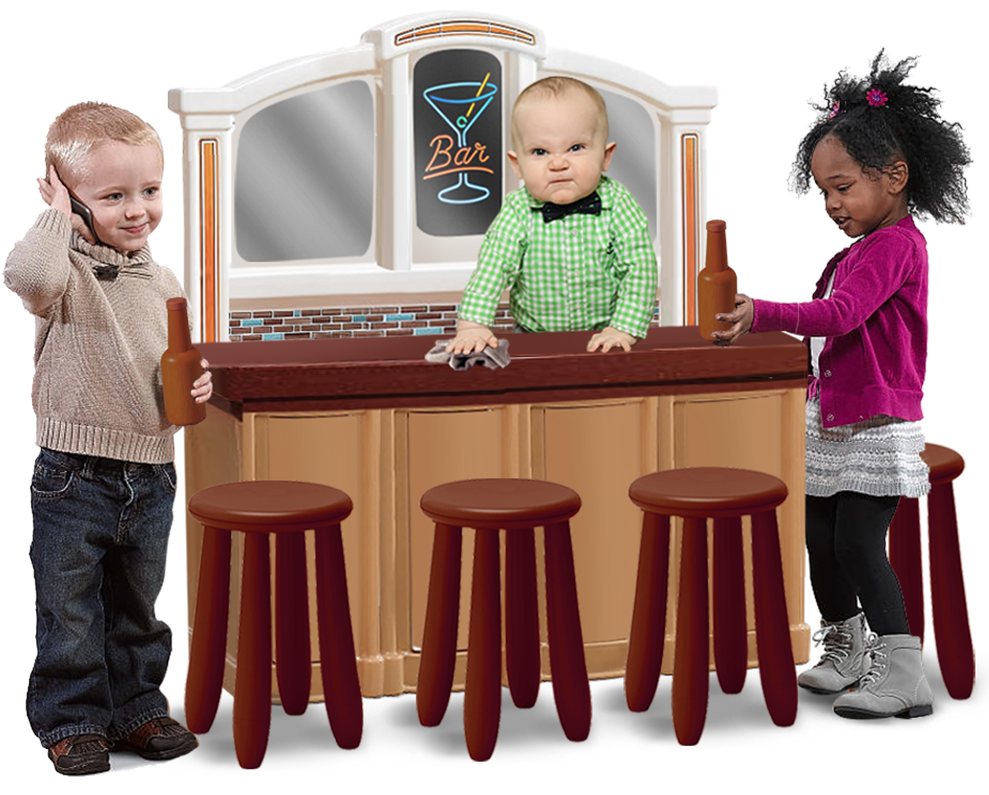