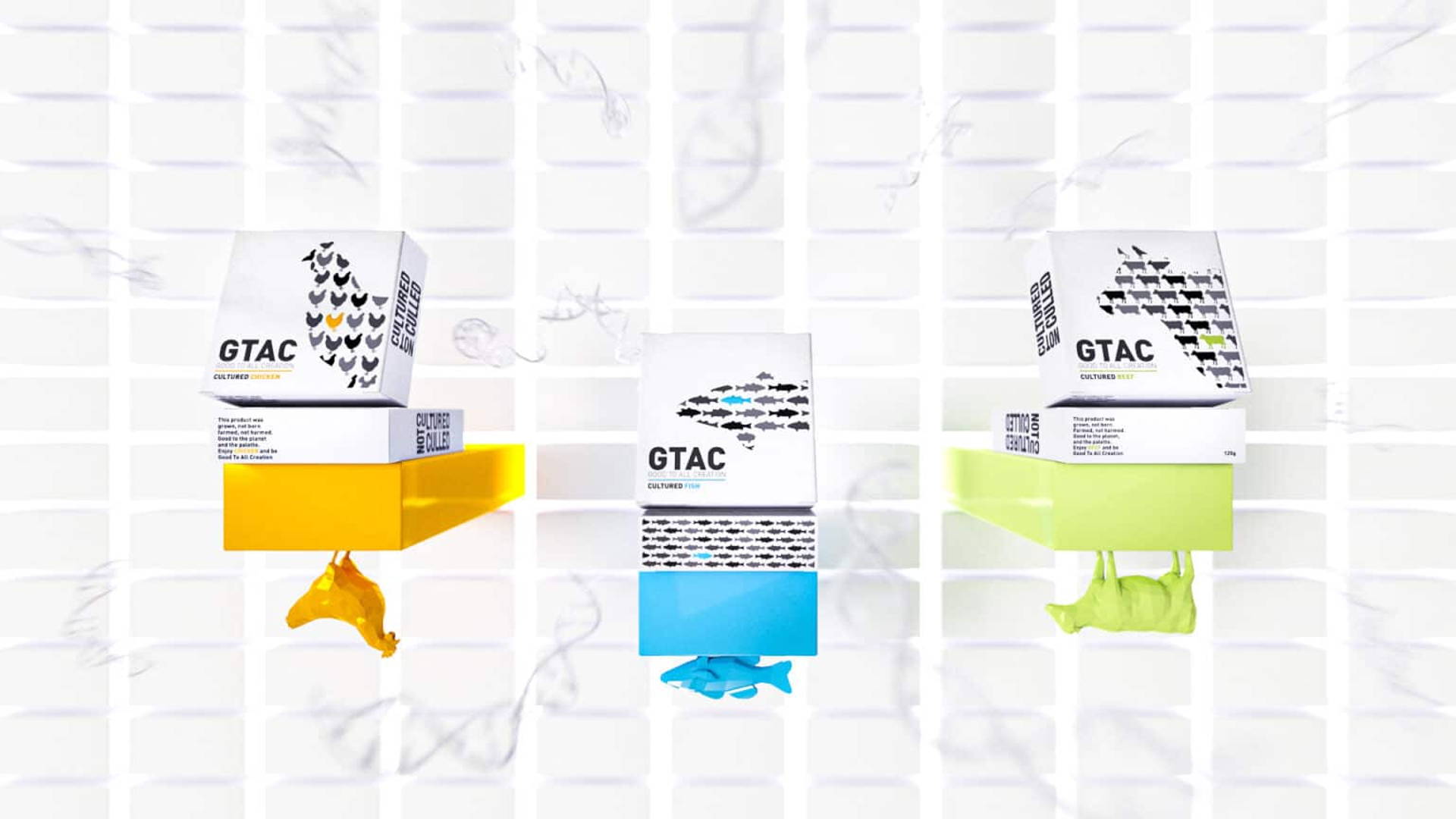 Cultured meat may seem like something possible in the distant future, but commercially available lab-grown meat is already a reality. Late last year, Singapore became the first nation to approve synth-meat, and Eat Just is currently serving up cultured chicken nuggets as a trial in Singapore under the Good Meat brand.

Although lab-grown meat is still a novelty, agency Idea Dolls recently embarked on a concept project for a hypothetical meat line, exploring how to brand such a product to the public. Dubbed "Good To All Creation," or GTAC, the branding features some of the unique characteristics inherent to lab-created meat.

“Cultured meat is the pinnacle of advanced food tech. Sustainably, it has the potential to feed more people at a lower cost and at the same time dramatically impact world CO2 levels by eliminating the need for farmed livestock,” explained Siena Dexter, creative director at Idea Dolls. “Ethically, it would mean animals no longer need to be culled to sustain certain diets and carnivorous tastes. But while imagining the possibilities of cultured meat, or ‘lab-grown meat,’ the question we kept coming back to was how would we make the concept of meat grown in a petri-dish more palatable to consumers?”

GTAC’s branding has hints of consumer technology. There are scientific nods to comb through, and overall the tone is serious and optimistic about the future. The minimal packaging is sleek, cool, and it feels pretty darn new and shiny. The raised textures and tech-inspired colors reinforce GTAC’s science-powered products, and animal shapes get made up of smaller graphics of the same animal, another reference to the technical process of creating cultured meat from cells.

“We decided to lean into the quantum nature of the product, looking to NASA space food for inspiration. Another creative driver was putting the ethical benefits front and center - so the idea of ‘many from one’ became key to our visual execution. The name GTAC (Good to All Creation) uses the same letters as DNA sequencing, letters that mark the blueprint of all life in the universe—we hoped to tie the product back to the idea that we are all the same on a DNA level, and lab-grown meat isn’t so different really,” Dexter said.

Cultured proteins, even Good Meat’s chicken, have a way to go from approximating the entire experience of the genuine article, such as fat marbling within the muscle. Current technology allows for the cultivation of meat with a diced consistency, something akin to chicken nuggets. It isn’t a substitute for the real deal that gets made from plants, which might temper its appeal to vegetarians and vegans. Idea Dolls decided to focus on consumers interested in the new kind of meat, the technologically curious that is always looking to try the latest gadget or innovation.

“If marketed right, lab-grown meat has huge potential, but the education piece will be significant. A product that’s technically unnatural, perhaps even unethical to some, might not sit well with vegetarians and vegans. It also might not satisfy the craving of meat-eaters looking for a regular steak. Currently, lab-grown meat is all muscle and no fat, so it’s just not going to taste as good. We had to sidestep that it wasn’t going to taste great, wasn’t natural, and probably couldn’t be classed as vegan by positioning the product as the future of food, by connecting with inquisitive, curious consumers who could be early adopters and ambassadors of the brand. The kind of people who enjoy a voyage into the unknown at the point of sale.”

So, where does cultured meat sit among the conventional and plant-based alternatives?

Lab-made meat is a one-to-one alternative to livestock-derived protein, and it’s not a vegetarian or vegan substitute either. Synthetic meat has the potential to feed more people with fewer resources and environmental impact than conventional meat and, given enough innovation and economies of scale, reach at least price parity with commercial meat. Like plant-based burgers, lab-cultured meat is kill-free, as it doesn’t require the culling of live creatures.

“When cultured, a tiny sample of cells from a live animal can feed an unlimited number of people," Siena says. "That means that when the cost per unit eventually reduces, cultured meat could offer a healthier, cruelty-free budget option for carnivorous diets. In the shorter term, cultured meat could benefit eco-conscious shoppers who are struggling with meat-free diets. It would mean no culling, reduced deforestation, and a significant impact on the environment.

"As long as consumers gel with the idea, of course," Siena adds.