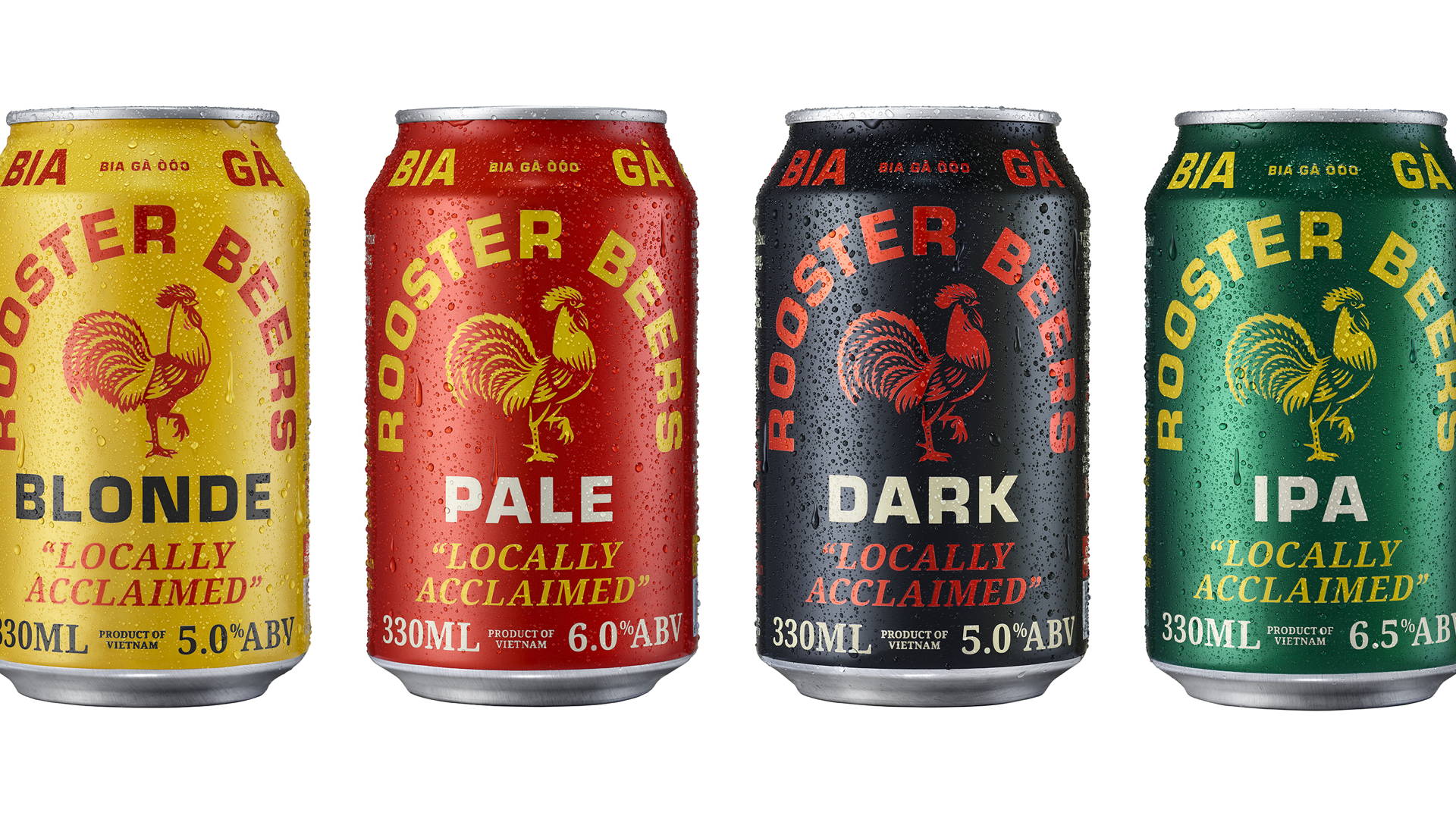 Chickens are familiar to almost everyone on the planet. The bird, originating in the jungles of Southeast Asia, provides a common and relatively inexpensive protein from its flesh and eggs. And though these fowl are found all over the world, the rooster’s significance varies wildly among different cultures.

In America, some consider it little more than a farmer’s alarm clock or comic arch-nemesis, but it Vietnam, the bird is highly esteemed, and its virtues admired. So when Rice Creative looked to create a new brand identity for Vietnamese craft brewer Rooster Beer, formerly known as Phat Rooster Ales, they turned to the nation’s love of the cockerel.

“The rooster, as an animal, is kind of omnipresent in Vietnam," explains Joshua Breidenbach, partner and creative director at Rice Creative. "While the rooster is associated with a warm, rural environment, one is just as likely to see and hear a rooster in the center of the city, as much as on a farm."

What’s more, it’s a symbol of hard work, dependability, pride, and strength. “It’s a positive symbol in Vietnamese culture from its origins to now,” he adds. “Depictions of roosters can be seen hammered into some of the earliest known Vietnamese metal-works. Today they crow at dawn in the centers of Vietnam’s most modern cities."

Beer is a popular beverage in Vietnam, the nation drinks 43 liters of suds per capita annually, putting it behind only China and Japan in terms of consumption regionally and 15th globally. Many beers in Vietnam get brewed so they can get consumed in the local, balmy temperatures, just as any Anthony Bourdain rerun or YouTube clip will tell you. So, lighter ales that you can enjoy socially with food dominate the market, but demand for craft-style beers that are popular abroad also exists, a market desire that Rooster founders set out to help feed in 2015.

Instead of relying on stunts and gimmicky flavors, Rooster focused on six classic styles of beer—blonde, pale, dark, IPA, hefe, and pilsner—straightforward brews that are crisp and refreshing, right at home in a Vietnamese taproom and approachable for newcomers to craft beer. In fact, the brand eschews much of the attitude and flair commonly associated with the craft beer scene, opting for something that feels local and deeply rooted in Vietnamese culture.

Rooster Beer wanted a visual identity and branding that matched their approach to brewing and product lineup. Rice gave the brand a color palette based on national identity, a strikingly bold combination of yellow and red. The typography is strong, utilitarian, and can be read easily on a large roadside poster and used digitally. The only real embellishment is an illustration of a proud rooster and some light-hearted and succinct copy such as “Locally Acclaimed” and the somewhat curious “Here Comes The Rooster,” a phrase most associated with the Alice in Chains song "Rooster."

Rice Creative’s execution uses national identity and the beloved banty bird to accurately impart Rooster's approach to craft beer and the brand’s personality, especially the shared characteristics of hardiness, determination, and pride. Overall, it is a brand identity that celebrates the people for whom Rooster brews their beer.

“Like a rooster, the beers are simple, proud, dependable, and have a voice,” Joshua said. “We found these traits reflected in Vietnamese culture itself, which is why the whole brand feels so integrated with the place.”

Kellogg's Releases Unicorn, Mermaid, and Birthday Cake Waffles Because What Is Even Breakfast Anyway?