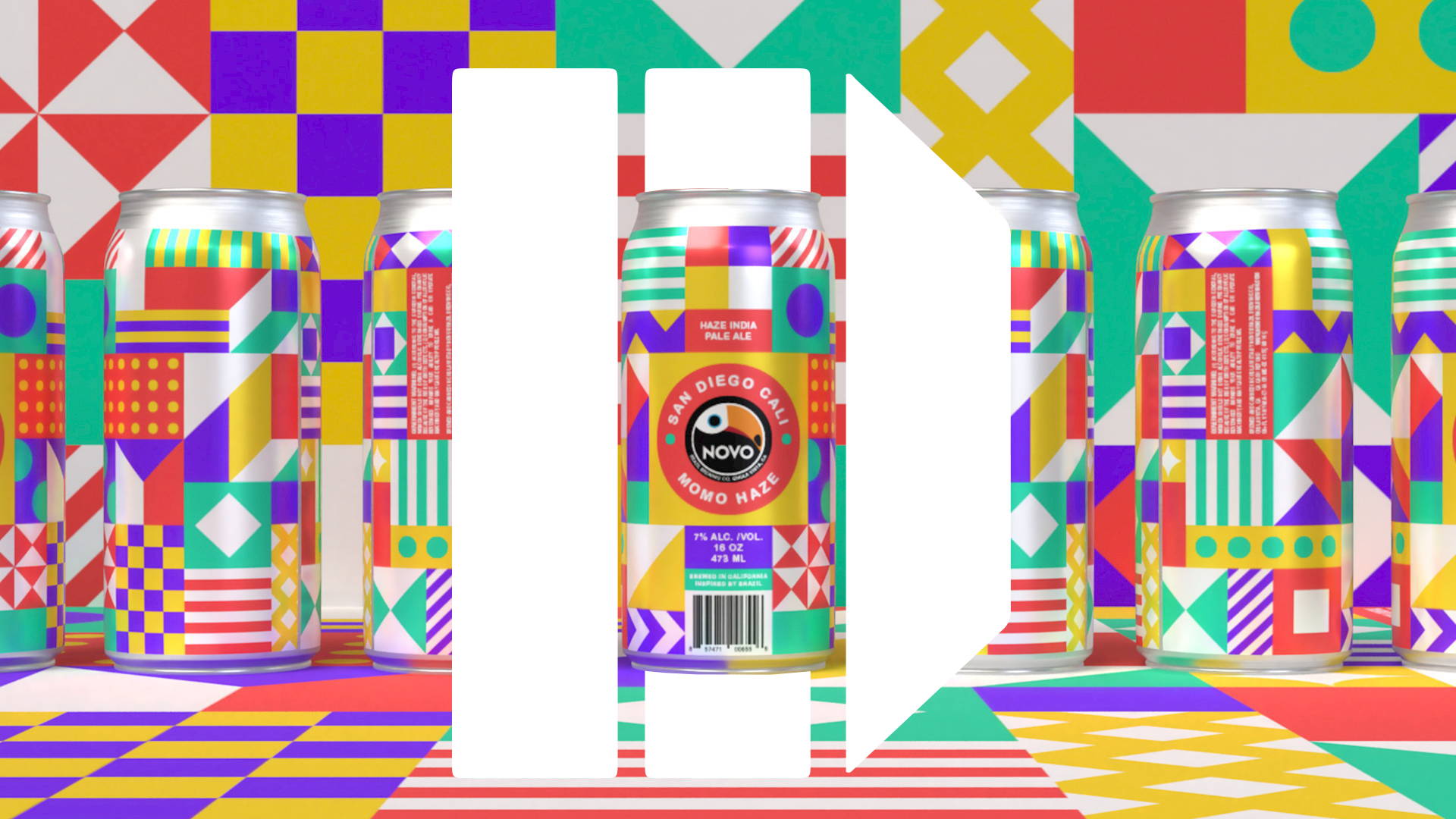 Pack of the Month: Dazzle Studio Razzle-Dazzles Us With Novo Brazil Brewing

There are a million breweries in San Diego.

OK, it’s actually around 155 as of earlier this year, but it's a cutthroat, dog-eat-dog world, with craft brewers fighting for dominance in the never-ending battle of who can out-IPA the other.

Also, by cutthroat, I mean it is mostly well-meaning folks who just like microbiology and ornate coasters. Some of them also have beards.

That said, bottle and can labeling being what it is, you have to get pretty wild to stand out on the shelf or Instagram, and that's what Zipeng Zhu and his design agency Dazzle Studio have done for the award-winning Novo Brazil Brewing out of Chula Vista and 132 Studio.

It’s bright, it’s bold, and it has damn-near all of the shapes and patterns you could throw at it. You can’t help but fall in love with the packaging and their audacious use of color.

“They had a previous identity and packaging which they wanted to phase out,” Zipeng says. “It wasn’t contemporary or responding well on social media. They wanted a modular design system that can constantly change with moving patterns and things they can swap out. That way, I didn’t need to go back and design more.”

For the modular system, they implemented two pillars throughout the packaging, one being rigid and the other squiggly. Some cans like Momo Haze have sharpers features and shapes, while others, like Pool Party, revel in squiggly patterns. “Out of a modular system, each design still has lots of personality, and it doesn’t just repeat itself,” Zipeng adds.

Each beer, however, has a distinct color palette, utilizing just four colors, and while they're also semi-monochromatic, there's a little variation within each design. Pool Party Haze, for instance, features baby blue with a hint of pink but also throws in some purple and aqua-green while Mango Haze sports some tropical orange and green. Each beer displays bold tones with an accent that complements the overall design.

It’s no surprise that the cans peacock their colors so prominently, as that is part of Dazzle’s signature style. “Dazzle Studio has three attributes,” Zipeng says. “Colorful, relentless, and exuberant. That’s how we deliver through design. With Novo, it’s this flavorful beer, and I want to be a champion of color.”

The only part of the original packaging design that was off-limits was their logo featuring a toucan. Thinking that the brewery wanted to play more off of their Brazilian heritage, Dazzle offered to draw up a few jungle patterns, but Novo insisted they wanted something modern without all of the added rainforests.

Of course, at that point, Zipeng had a decision to make. Do you run from the logo, or bring it into the heart of the design?

“Paula Scher says you can either complement or contrast,” Zipeng says. “I wanted to compliment. We took inspiration from the logo and toucan. You can’t just leave it alone. Plus, Novo is proud of the logo. We made it the hero and designed around it.”

That’s abundantly clear from the design, as it looks as if everything emanates from the shapes that make up the toucan in the logo, and once you get outside of the emblem, the design deconstructs itself into shapes and geometric patterns. It’s a far cry from the brand's tropical origins and overall look, but it's a striking redesign hinting at the brew’s premium makeup.

The result is a beer with a patchwork quality, one that seemingly resembles a colorful quilt with a modern spin. This is even more apparent after viewing the animated social campaigns Dazzle whipped up, all of which have a playful, funhouse sheen to them. They hope to convince the brewery to adopt some of these animations for an AR campaign because it’s that digital element they believe sets them apart from a lot of other beers on the market.

For Zipeng and Dazzle, it’s a stunning journey into the world of craft beer, one that plays into his studio’s overall philosophy of making their work bold and bright, an enticing technicolor Busby Berkely fever dream for the beer cooler.

“We are a color ambassador,” he jokes.

Meet the Pod Pack: The First Ever Beer Brewed for Orcas