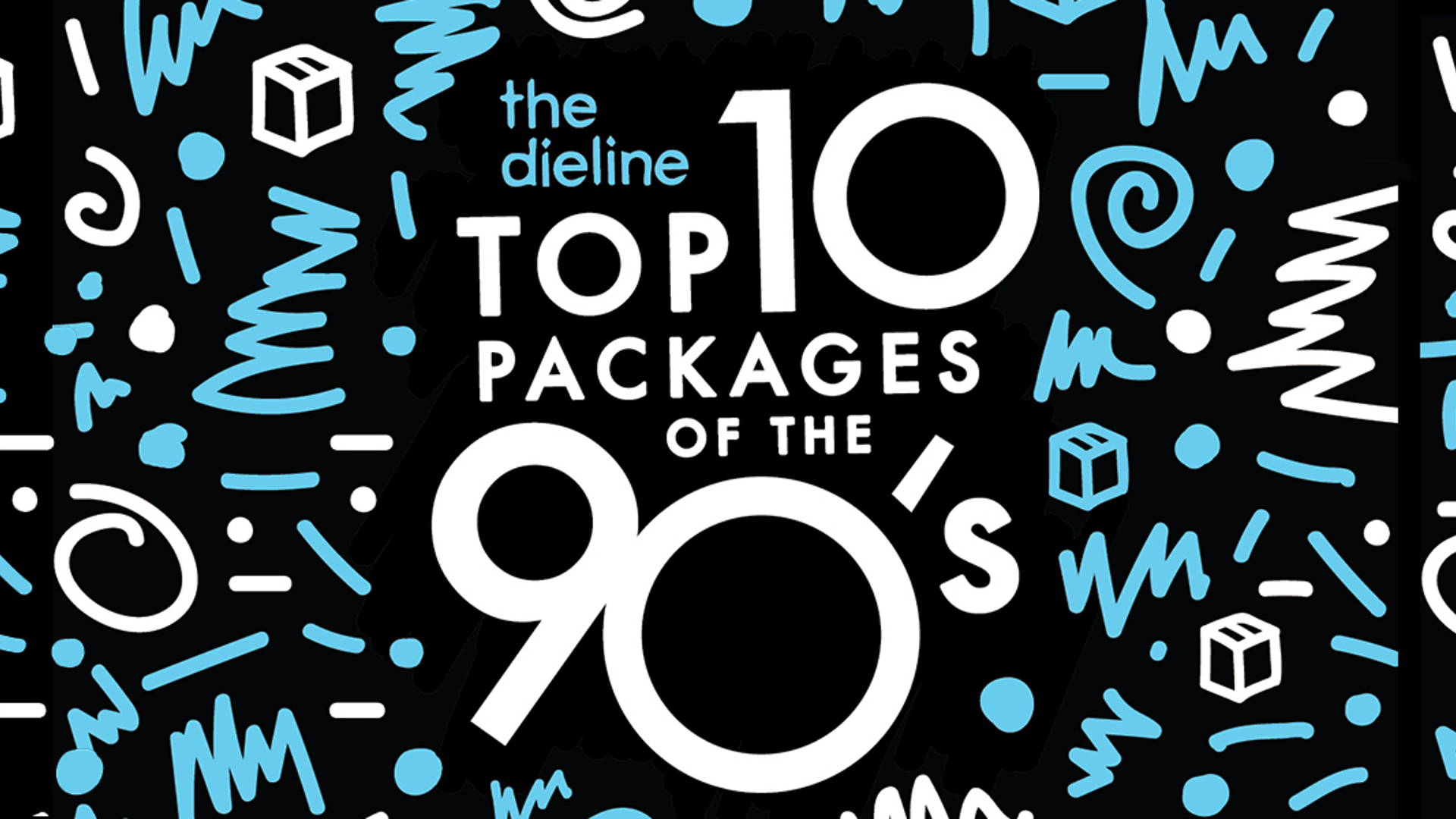 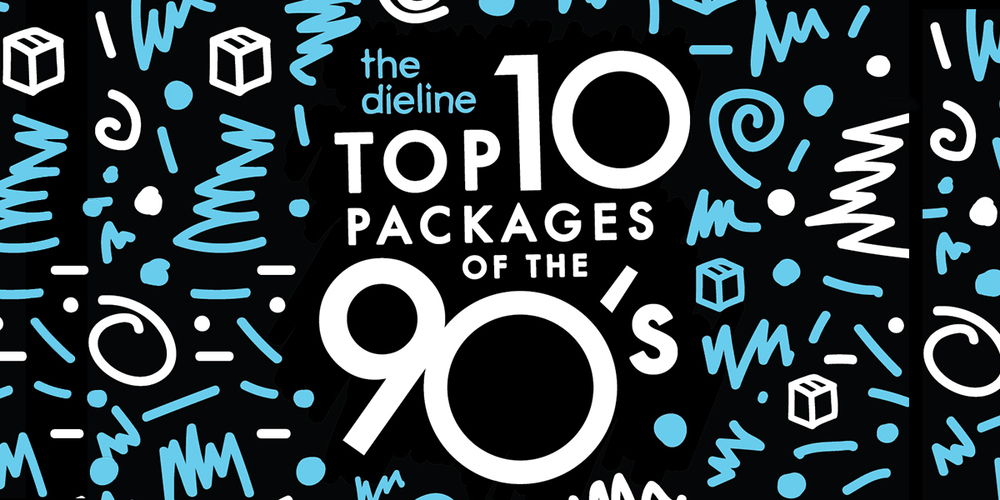 Oh the 90’s, an equal parts chaotic and exciting period for graphic design. The advancement of computers and applications like Quark Express (RIP) and Illustrator opened the world to experimental, complex and often frenetic arrangements of type and visuals. (David Carson, I’m looking at you) As for packaging, the more you could stand out on shelf, the better. Strokes, drop shadows, gradients and futuristic/organic shapes ruled the package world. Layer a neon green starburst over an orange drop shadow? That will definitely pop! Seven different typefaces on one bottle? Has to be better than one! But amongst the chaos there were a handful of brands that were able to breakthrough with some pretty memorable packages. Some for their ingenuity, others for their restraint and some simply for being plain old awesome. So break out your Magic Eye books, your Pogs, your Mancala and your Tamagotchi, these are my top 10 package designs of the 90’s. (Disclaimer, I work for The Coca-Cola Company) 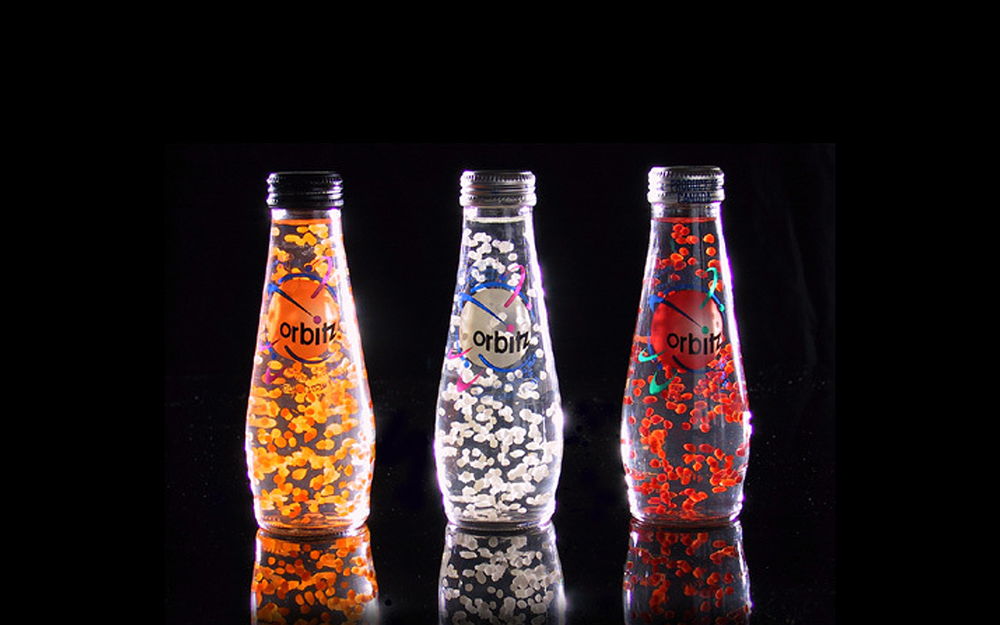 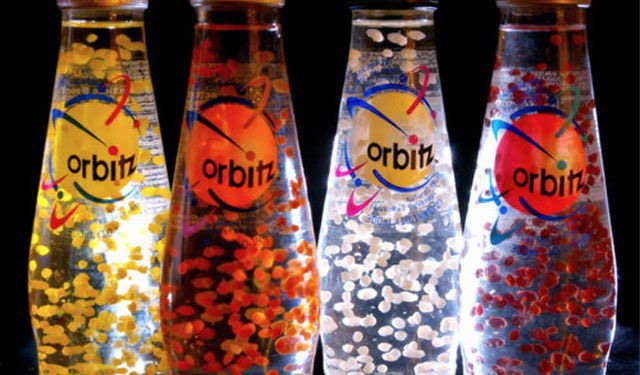 I miss you Orbitz Soft Drink. I remember when this became available at my local Pizza place and everyone went totally crazy for it. Orbitz was introduced in 1994 and quickly disappeared due to poor sales. For those that missed out, Orbitz was a noncarbonated fruit flavored beverage that had small edible gummy balls floating in it. Think bubble tea, but the bubbles magically floated in a clear fruit punch. (or Goldschlager, but for kids!) Orbitz was marketed as a "texturally enhanced alternative beverage" but to me it always looked like a drinkable lava lamp. The packaging just looked so unique that kids like myself just had to have it despite it’s equally unique taste. The logo was simple (for the 90’s) and the packaging really allowed for the innovative product to shine. Fun note, they eventually sold their web domain to a little travel company called Orbitz.com. 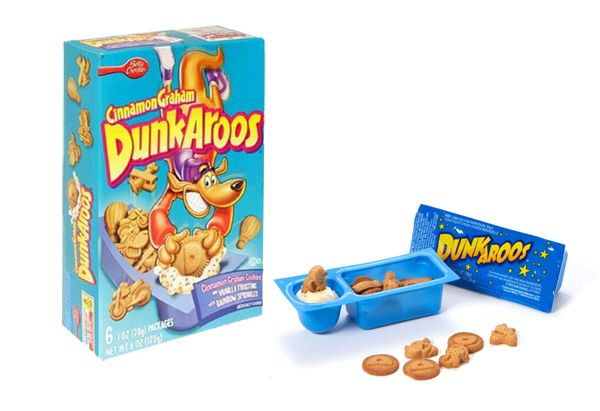 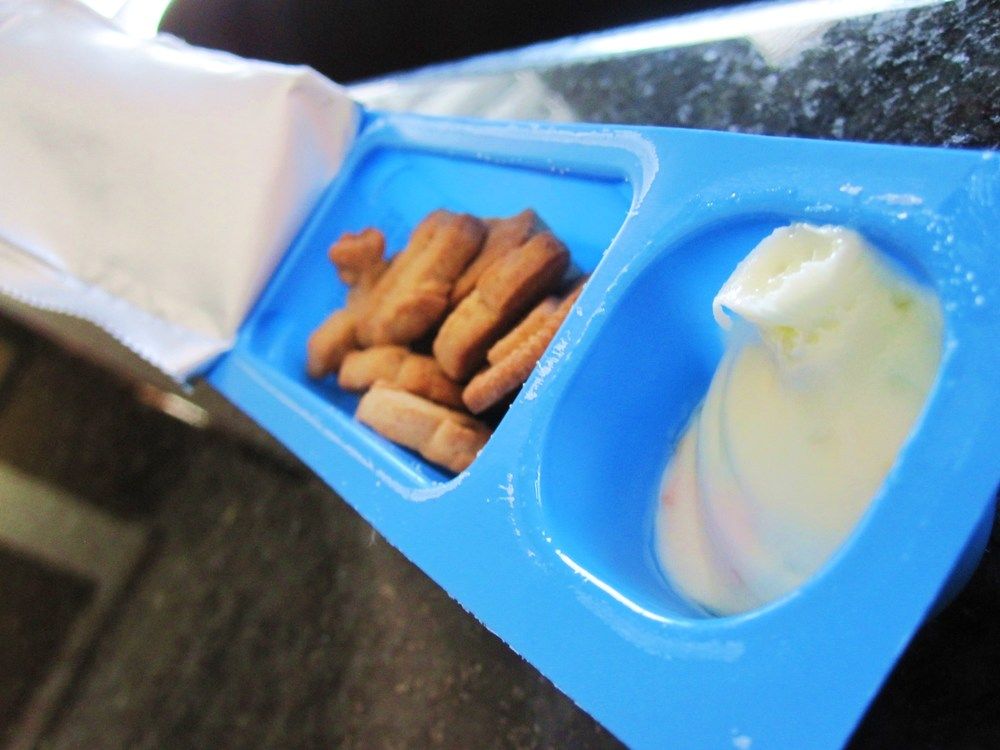 I’ve had a note in my phone for maybe five years now that just says: Artisanal Dunk-A-Roos. Maybe it’s because I live in Brooklyn and everything I once loved as a kid is coming back, but I think it’s a decent idea (please don’t steal it.) If a restaurant opened that had a deconstructed Dunk-A-Roos dessert option of graham crackers and vanilla icing for dipping, I’m pretty sure 90’s kids would go crazy for it. This to me is the most iconic snack of the 90’s. From a packaging perspective, it’s a complete game changer with two separate compartments for the cookie and icing. (compartmentalization, a big packaging trend of the 90’s) This system eventually led to the dual container yogurts that are all over the market these days. The packaging featured just the perfect amount of icing for the amount of cookies, but if you were anything like me as a kid, any extra icing was quickly whipped up with my finger. Ah, to be young again. 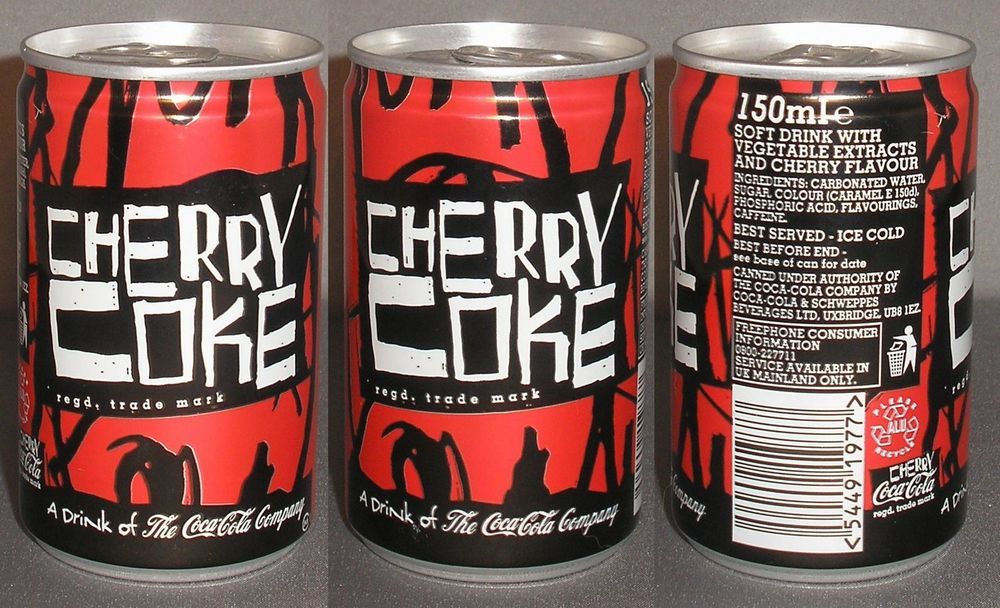 There are few things in this life that I enjoy more than a cold crisp Cherry Coke. While the liquid has remained the same since its introduction in 1985, the brand has gone through a number of different packaging designs over the years. This bold, abstract design from the late 90’s is easily my personal favorite. I distinctly remember going to my friends Scott’s house after school and his family would always have rows upon rows of these cans in their fridge. This packaging was perfectly counter culture and felt like it had an attitude that spoke to my inner 90’s artist. The type was perfectly imperfect and the design wasn’t selling too hard. It just said look at me, I’m a delicious tasting cherry soda, drink me. Side note: Remember when Jay-Z was hired to design the new Cherry Coke graphics? Jay-Z gets a lot of design work for a rapper. 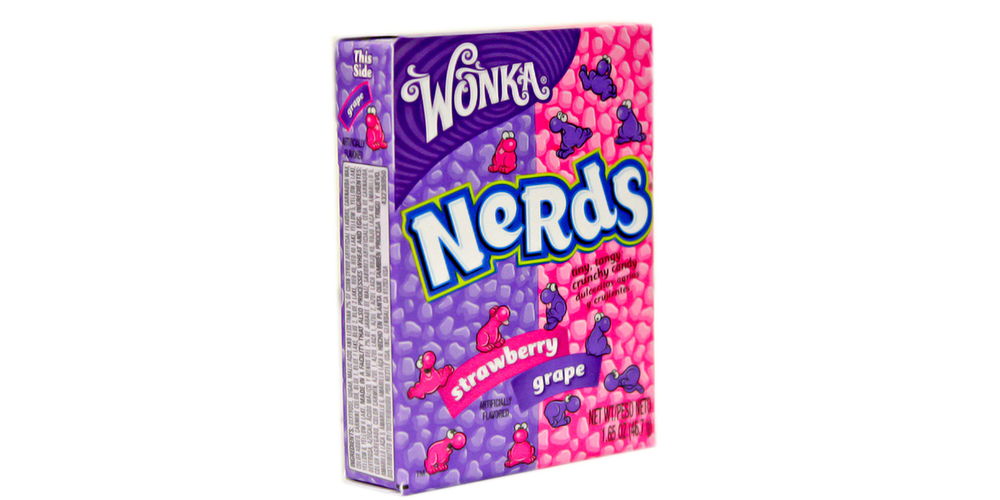 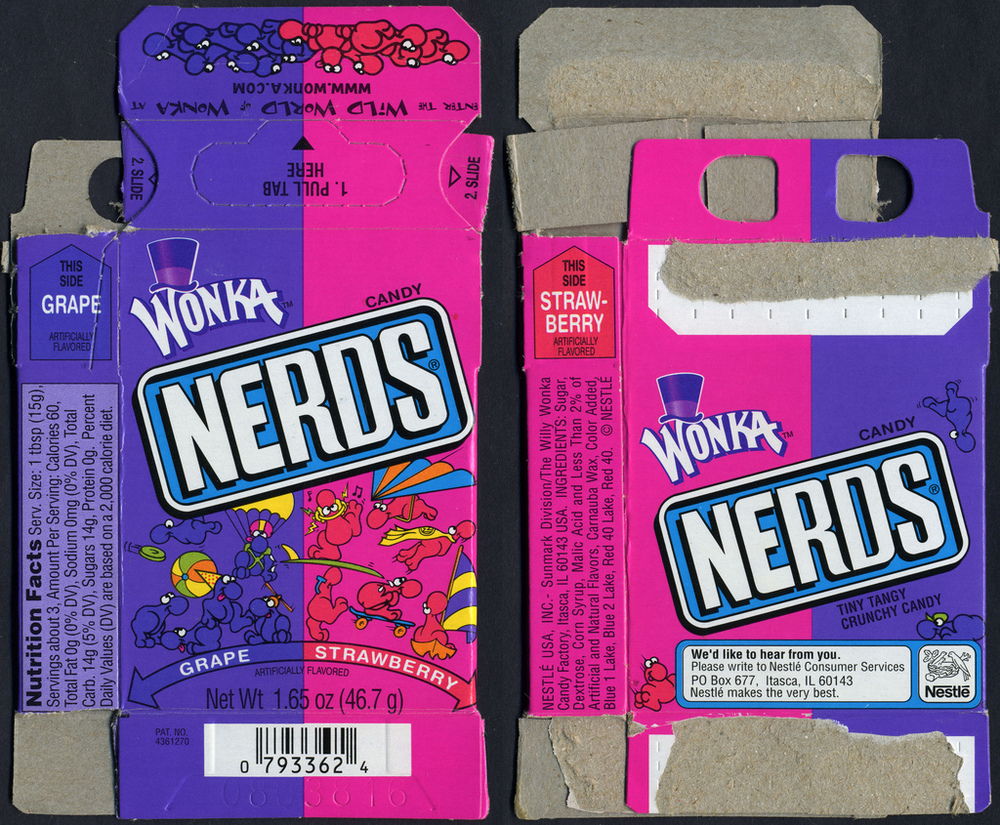 We ate a lot of Candy in 90’s. A lot of that candy came in innovative packaging from The Willy Wonka Candy Company. Nerds are easily one of my favorites. What are they made of? Sugar coated flavored Sugar? Delicious. Sure the 90’s weren’t exactly a time of extreme health and wellness, but Nerds might be our greatest candy packaging moment as a species. One candy. Two Flavors. One package. Brilliance. (also compartmentalization) How come this hasn’t been adopted in more categories? Two flavors of Ben & Jerry’s in one pint? Two different types of cereal in one box? Cmon people. Nevertheless, the packaging for Nerds is a perfectly 90’s snack with it’s bright colors and zany illustration. The only downside of this package… the cardboard would sometimes get soggy from mouth saliva. Moving on. 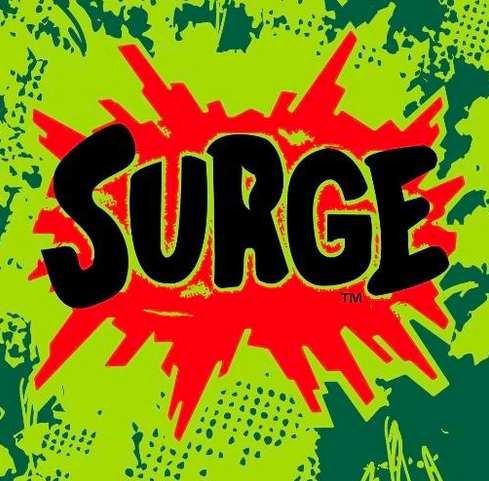 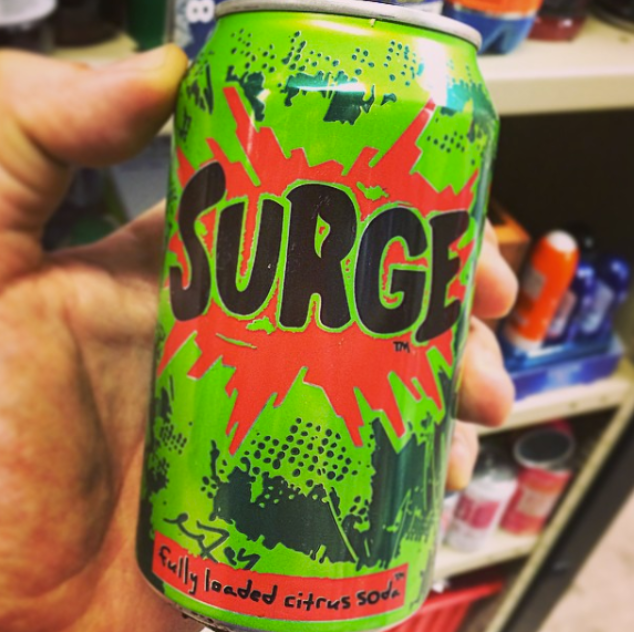 I couldn’t possibly do a top ten 90’s packaging list without including the comeback story that is Surge. Surge was introduced in 1996 by The Coca-Cola Company as an “extreme” lemon-lime soda to compete with the citrus sodas that were all the rage at the time. This “hardcore” beverage was actually originally introduced in Norway as Urge and was so popular that it was brought to America as Surge. Though the drink was discontinued in 2003, the drink was so popular amongst loyalists that a facebook community was formed by web designer Eric "Karks" Karkovack with the goal of bringing it back to the world. Eleven years later the movement had gained 200,000 Likes. Last year the group got what they wished for and Surge was rereleased in small batches via Amazon in 16oz cans. Everyone loves a good comeback story. 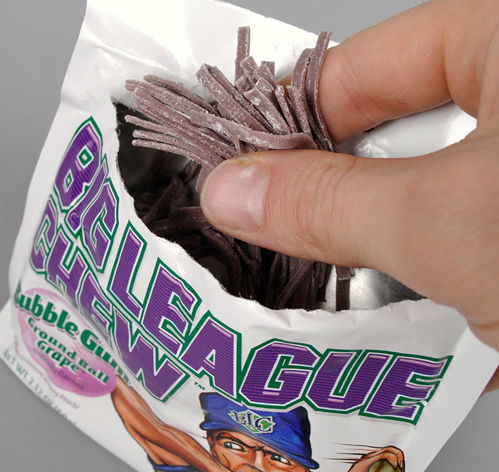 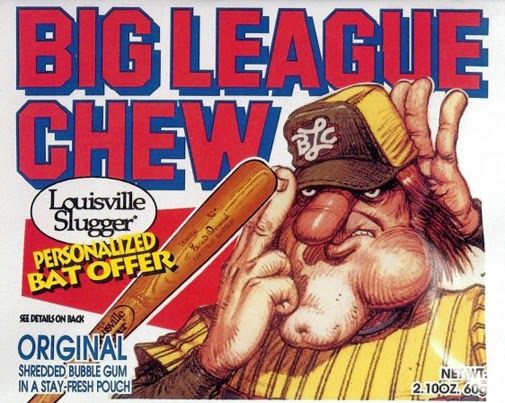 No Little League practice in the 90’s was complete without a bag of Big League Chew. Why even play baseball if you didn’t have this delicious, shredded bubble gum with you? With it’s dipping tabacco inspired packaging, Big League Chew made you feel like a big league baller while you waited for some kid to finally hit the ball to right field. Grab a giant handful of this gum, stick it right under your gums and you were ready to play some ball. Promoting gum to kids in tobacco form and packaging? I’m sorry, that is pretty brilliant. Big, bold shadowed type with creepy baseball player illustrations? This maybe should’ve been my number one. 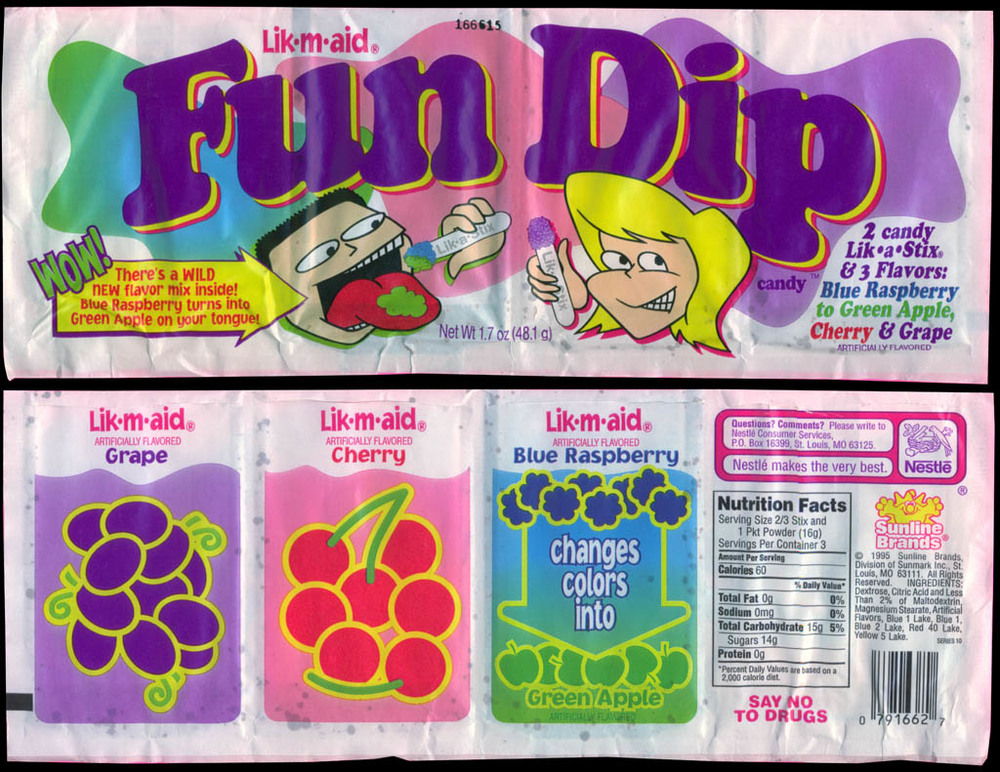 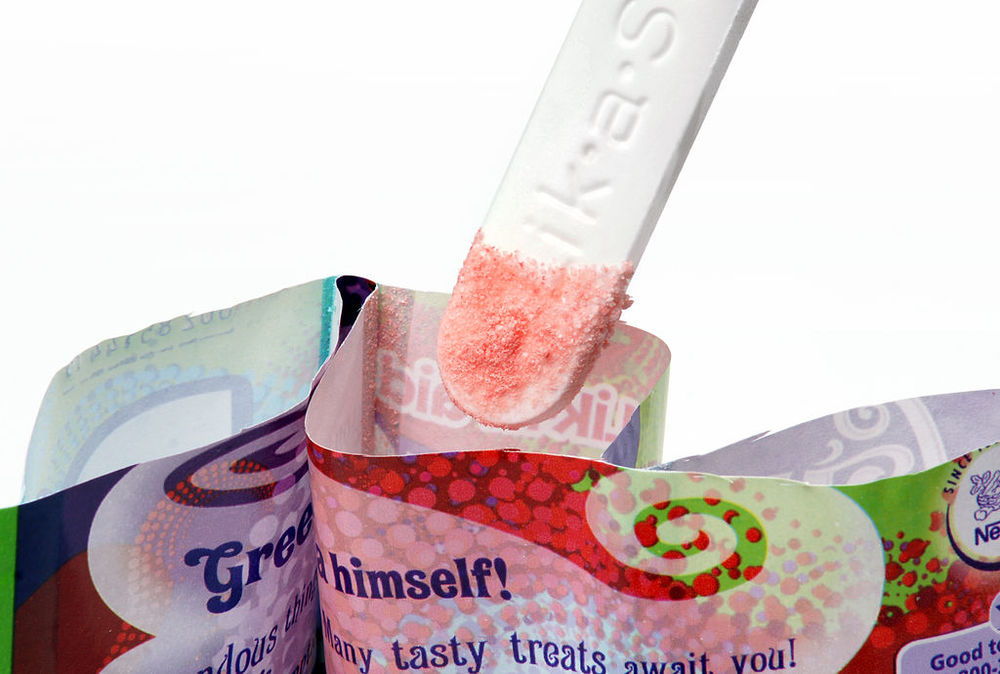 Another brilliant packaging creation from the beautiful minds at the Willy Wonka Candy Company: a stick of sugar that you dip into other flavored sugars. A classic if you will. Intended to be consumed by licking the sticks and using the moistened stick to collect the sugar, Fun Dip was originally introduced in the 40’s under the name Lik-M-Aid. While the original flavors consisted of ordinary flavors like lime, cherry and grape, it really shined in the 90’s when they introduced a mysterious flavor combination that turned from blue when dry to green when wet with saliva or water. Equal parts delicious, mysterious and fun to eat. 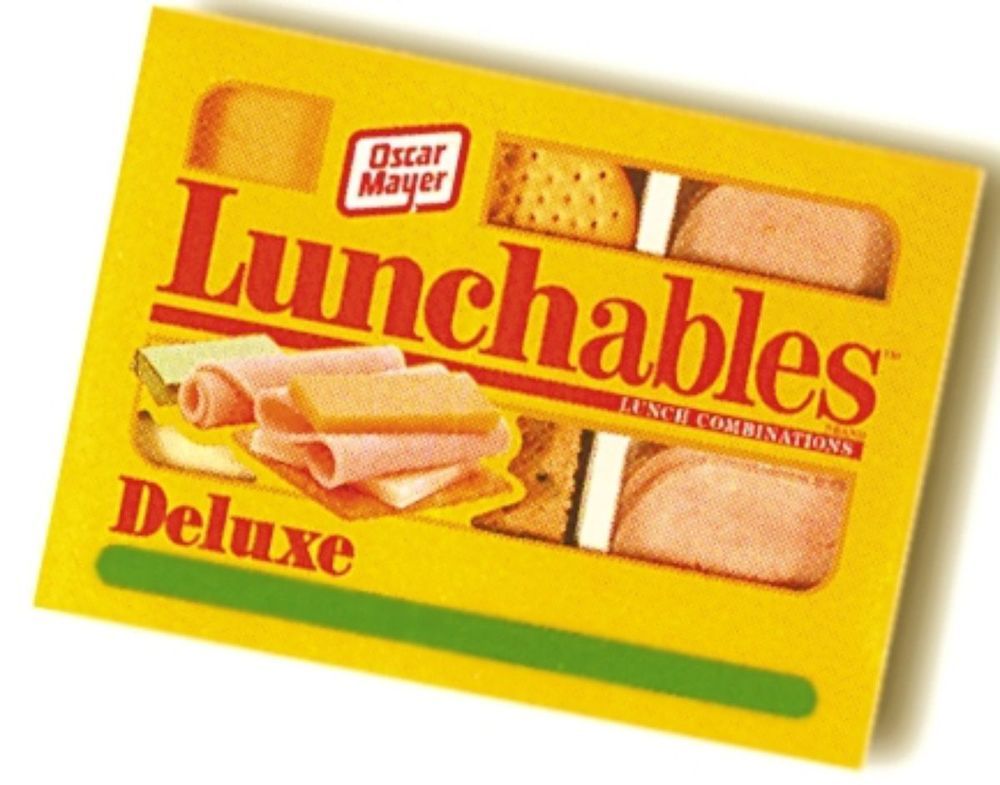 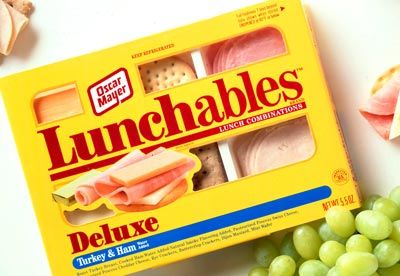 Lunchables are the holy grail of the 90’s compartmentalization trend. Lunchables was designed in 1985 as a way for Oscar Mayer to sell more bologna meat. (that bologna aint gonna sell itself) From a packaging perspective Lunchables also served a very serviceable convenience purpose. Working mothers who were pressed for time making breakfast and packing Lunch for their children to eat at school could turn to Lunchables as a brilliant one stop solution. The icing on top, every box came with a Capri Sun. (an honorable mention for this list) My personal favorite was the build your own pizza option where you layer the sauce, mozzarella cheese and pepperoni on a tiny crust. I’d eat that right now if someone offered me one. 30 years later, Lunchables are still going strong. They even recently introduced a Lunchables Breakfast offering that for reasons unknown to man is NOT named Brunchables. Cmon guys…. huge missed opportunity. (Shout out to Grantland’s Food News) 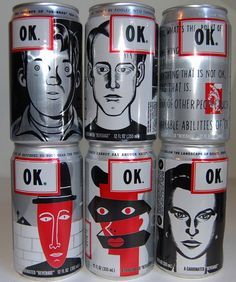 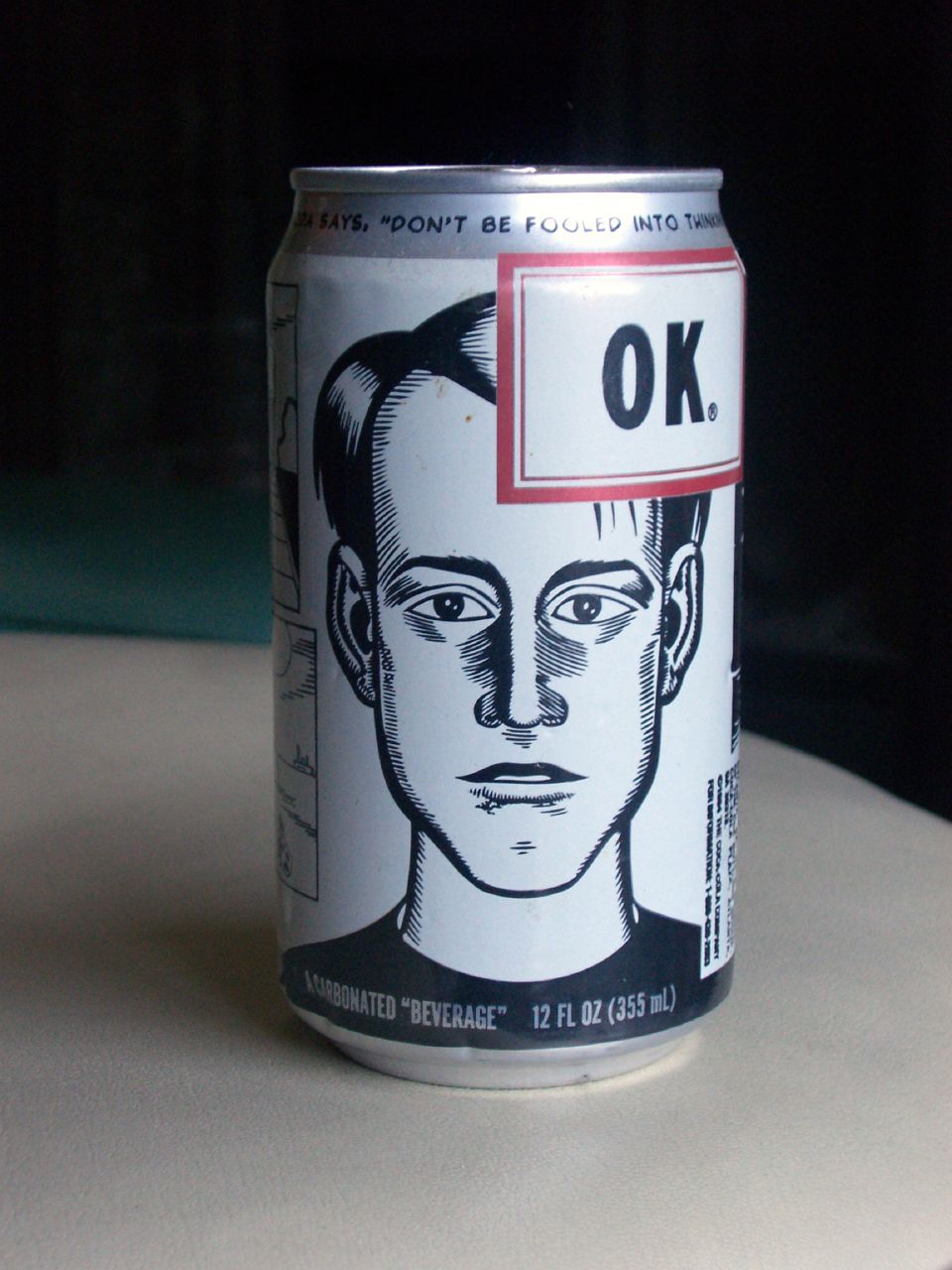 Ok, I have to admit. I never drank OK Soda in the 90’s. In fact, I’ve never even tried it. But on a recent trip to The Coca-Cola Archives in Atlanta (https://instagram.com/p/0LxNlTmyLx/) I was taken on an incredible journey through our company’s historic packaging past. One of my absolute favorite stories was that of OK Soda. Launched in 1993 OK perfectly reflected the offbeat, alternative generation-X mentality of the times. Instead of bright Coke red, the can featured

a darker grey/black design with experimental type and an angsty teen illustration. It was bold, different, and beautiful. The name comes from the fact that Coke is the second most recognized word in the world. The first… OK. Even the liquid was pretty counter culture . Described as “slightly spicy” it featured a mixture of every beverage that was available on a Coke fountain machine dispenser. Customers were also encouraged by the can design to call a hotline 1-800-I-FEEL-OK and interact with a variety of absurd and ironic messages. My absolute favorite part: Each can had excerpts from the OK brand manifesto. One of which reads “What's the point of OK? Well, what's the point of anything?” Doesn’t get more 90’s than that. 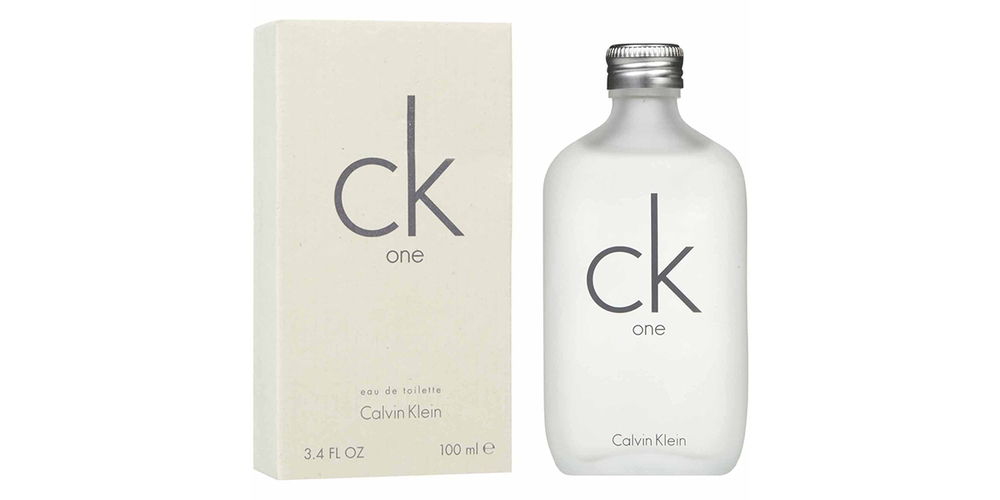 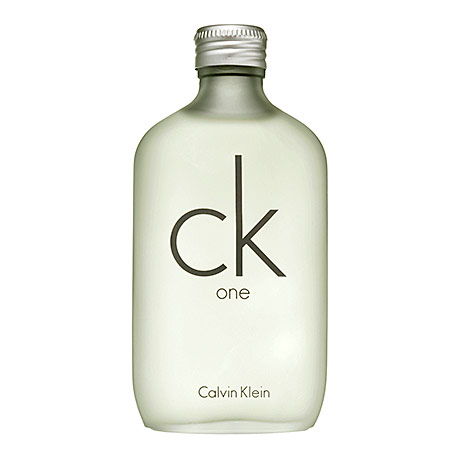 We’ve made it. Without a doubt this is my absolute favorite and in my personal opinion the most iconic package design of the 90’s. I might be biased because it was the official smell of my teenage years, but here’s why it’s number one for me…

First, the aesthetics.The simplicity of this design in a world full of competing, cluttered and chaotic graphics was groundbreaking and beyond ahead of it’s time. It’s sleek bottle and label is equal parts fashionable, modern, confident and minimally beautiful. A good amount of the packaging featured on the The Dieline today is inspired by CK One. It was so ahead of it’s time that Calvin Klein has never changed from the original packaging design.

Secondly, the cultural impact. Introduced in 1994, in the first 10 days alone Calvin Klein sold 5 MILION BOTTLES. It was a total phenomenon. To put that in perspective, that’s 4 times the number of albums Taylor Swift sold of 1989 in her first week and that was the best selling album since 2002. At the height of it’s popularity CK One sold 20 bottles PER MINUTE. People were lining up down the block to get their hands on a bottle. 21 years later, it’s still their best selling fragrance of all time. How do you package an entire generation? This has to be the one. 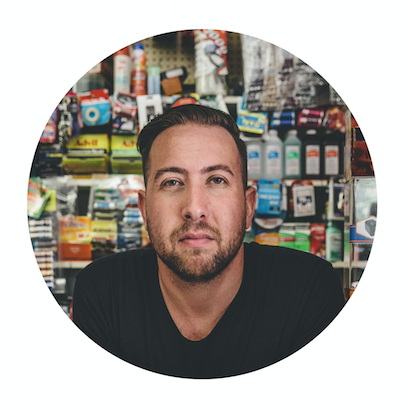 Alex Center is a Brooklyn-based designer who currently works for the global beverage leader, The Coca-Cola Company. He grew up in the town of Oceanside NY, home to the world's second Nathan's Famous Hot Dogs. He once worked for the New York Knicks as a designer where he worked with both his childhood idol, John Starks and his nemesis Isiah Thomas. He has spent most of his professional hours being creative on behalf of the beverage brand vitaminwater. Over the years, he has designed packaging that has been in hands across the globe, created breakthrough marketing campaigns, launched innovative new products and once met rapper 50 Cent who told him “You must think you're pretty special.” He got nervous and instantly started sweating. In 2011, Alex was named one of the 200 Best Packaging Designers by Luerzers Archive. In 2013, he started sharing his story with speaking engagements at The Dieline Forum, AIGA INitiative, HOW Design Live and as a guest on Debbie Millman's famous Design Matters podcast. In 2014, Alex was named a Person To Watch by GDUSA Magazine. In 2015, he became a columnist for HOW Magazine, writing about the expanding landscape of In-House design. Today, he leads the strategy and design vision for brands at Coca-Cola that include vitaminwater, smartwater & Powerade. In his personal time he enjoys rooting for New York sports teams that wear orange/blue, editing instagrams for far too long and searching for the freshest prosciutto in New York City.