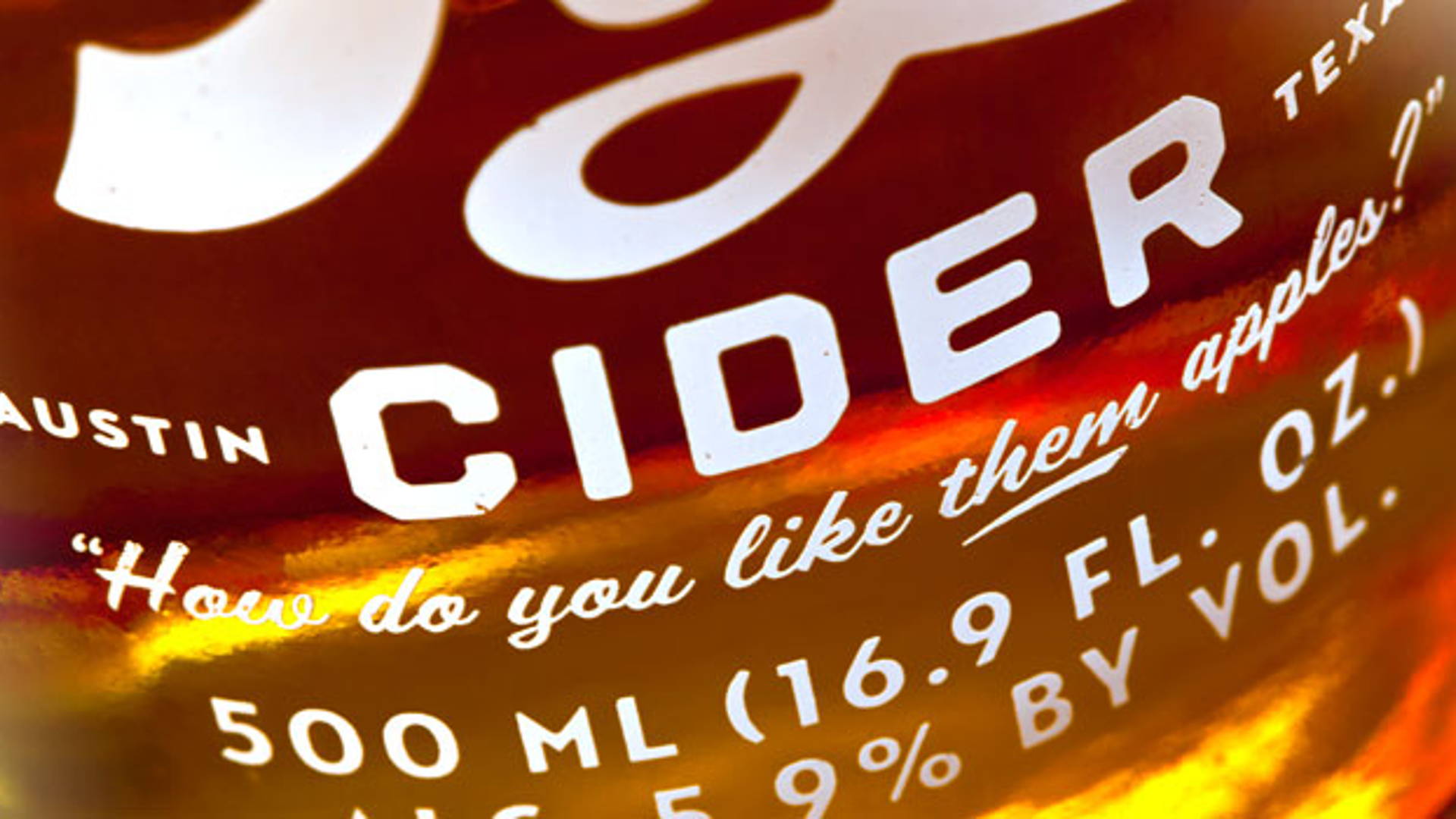 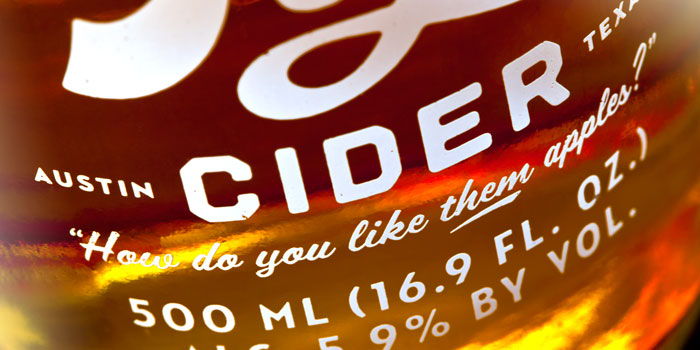 We make old-style cider, following the traditions that made cider the 'Original Drink of America'. Cider was the most popular drink in the land until Temperance broke up the party, but the cider people were drinking back then was very different to that which people are used to nowadays. We use vintage cider apple varieties, high in tannins and acids, to produce flavors that have not been widely experienced in America since Prohibition. We use the wild yeasts from the apples for a slow, natural fermentation and we add nothing to our cider which isn't present naturally in the fruit, no concentrate, no colorings and no artificial sweeteners. 'Gold Top' is our debut release, a lightly sparkling, very accessible introduction to what we're all about. It will be followed by the first of our limited edition ciders, which will be really unique, authentic examples of this long-lost classic American drink.

Gina Angie: Why did you decide to go with a printed bottle rather than the label we featured from the original design sketches?

Ed Gibson: We gave our designer Simon Walker a very demanding brief, to produce a design capable of recontextualizing the entire cider category in America. We wanted to put cider back in it's true context as the Original Drink of America,  a drink long overdue the kind renaissance that craft beer and cocktail mixology have enjoyed in recent years. This meant creating a brand style with a strong 1920's/30's feel, reminiscent of the Prohibiton era when cider went from the most popular drink in the land to almost total obsolescence. Simon created some absolutely beautiful hand drawn vintage scripts for the 'Austin Eastciders' & 'Gold Top' logos and the 'Cider-ORIGINAL DRINK OF AMERICA' tagline, but neither he nor we were entirely happy with how they looked printed on a label, no matter what color we tried them in. Simon made a joking comment that if only we could afford to silk screen the bottles then that would be perfect. I absolutely loved the idea and decided to look into it, whereupon we were all amazed to find out it was very affordable solution. The end result is an iconic 1920's style design somewhere between a beautiful old soda bottle and a classic old beer bottle.Gina Angie: Were any changes made to the logo or branding after deciding to go with a printed bottle?Ed Gibson: There was a huge evolution in the early designs which is beautifully documented on Simon's dribbble page, but at the point we decided on a printed bottle the whole thing just clicked, the only thing that changed is we made everything white! It quickly became obvious that that monochrome look was going to be highly effective in creating an authentic vintage feel.Gina Angie: Who is your target market and where is Austin Eastciders being sold?Ed Gibson: We really want to get male beer drinkers trying real, old-style cider. Cider still has a terrible reputation in the US as a drink for girls who don't like drinking! This isn't the case in England where America's cider culture originally came from and it certainly wasn't the case in America a century ago. Done properly, this is a serious, robust drink, dry, complex and incredibly refreshing.We put the first batch of Gold Top into about 20 of our favourite bars, restaurants and stores in Austin and they sold out pretty quick! We have already had a lot of interest from major retailers both within Texas, nationally and even internationally, so we're now getting funding together to ramp up production to meet the demand. You should hopefully see us back in bars and stores across Texas and further afield by the end of this summer.Gina Angie: Will Austin Eastciders ever venture in to different flavors?Ed Gibson: There is an almost endless amount of flavour variations you can create just with different old cider apple varieties, there is over 50 vintage varieties in Gold Top, each with it's own unique taste. Real cider is comparable to wine, you don't need to throw novelty flavourings in there when you're using the right kind of fruit and time-served traditional production techniques. We will regularly be releasing limited edition ciders made with different blends and specific single varieties, old-fashioned still ciders, bottle conditioned ciders, oaked ciders, I could go on and on, the possibilities are endless. Just like good wines taste of much more than grapes, good ciders taste of much more than apples.Gina Angie: I see that you shared photos of Upcycled Austin Eastciders bottles. Will you be selling these as glasses or sharing how to make them?Ed Gibson: We're working with Austin glass artist Dean Wolf of Wolf Art Glass to figure out a way in which as many of the bottles as possible can be upcycled. Throwing them all away would be terrible and they really do make beautiful glasses. We have some exciting ideas we're working on, watch this space!Gina Angie: Is there anything else you would like to share?

Ed Gibson: You can follow our progress on our blog at www.austineastciders.com. You can also see more of Simon Walker's incredible designs at Super_Furry on Flickr, he really is a genius, as is Derek Hatfield who we must give credit to for these wonderful photos! 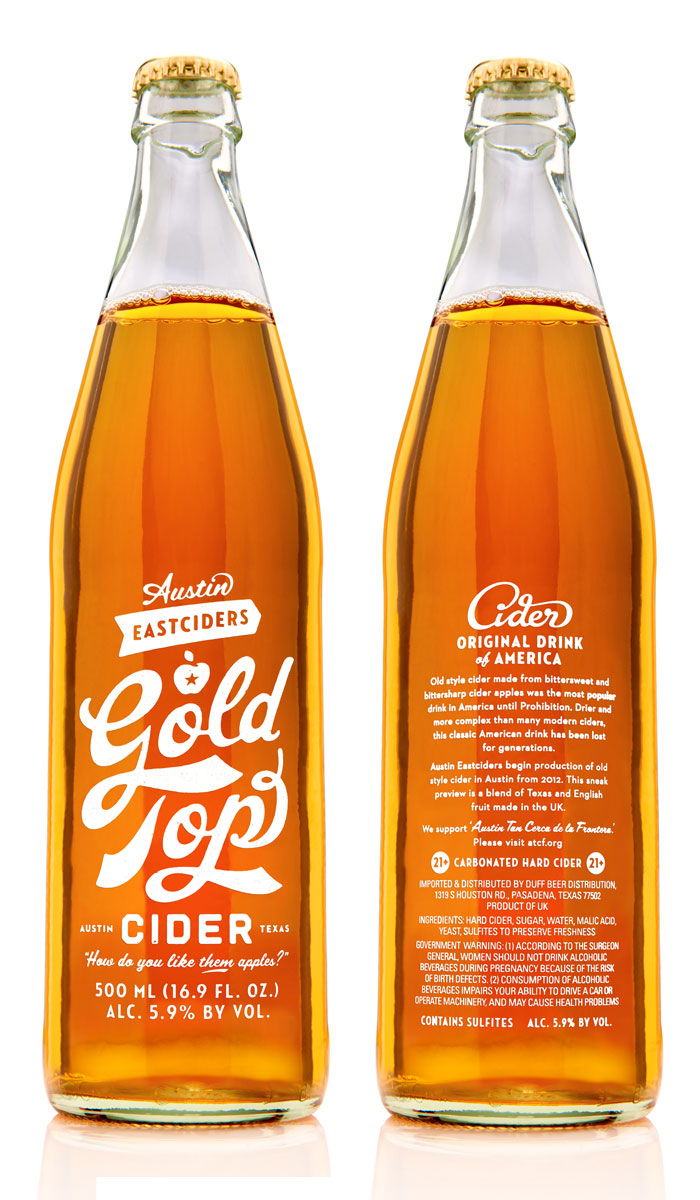 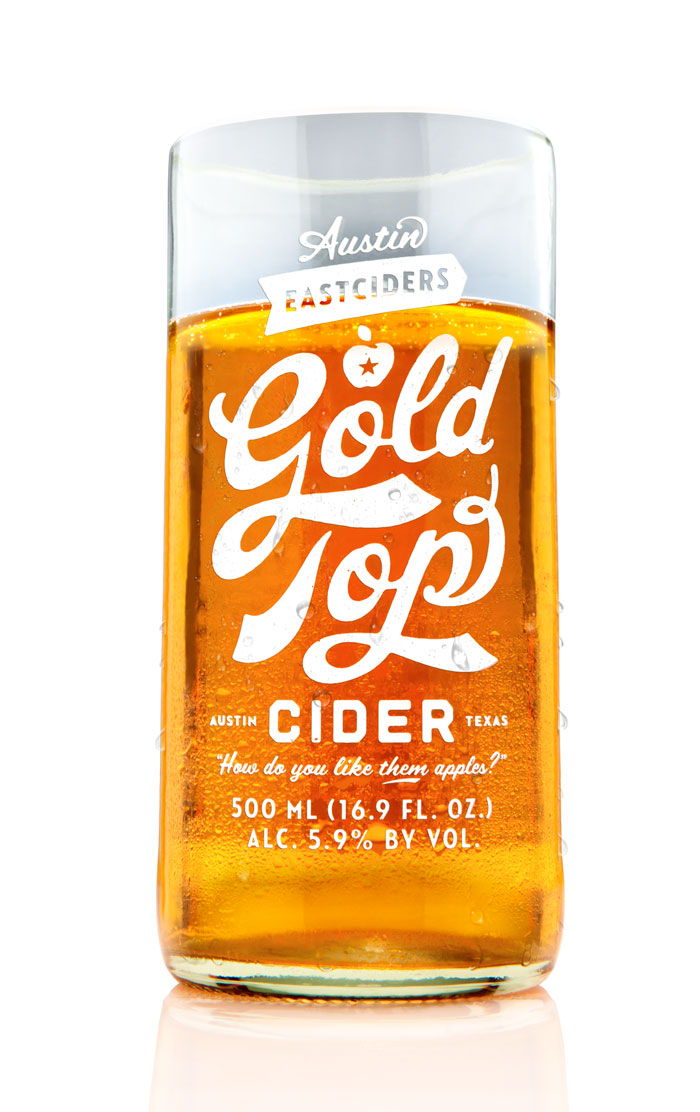 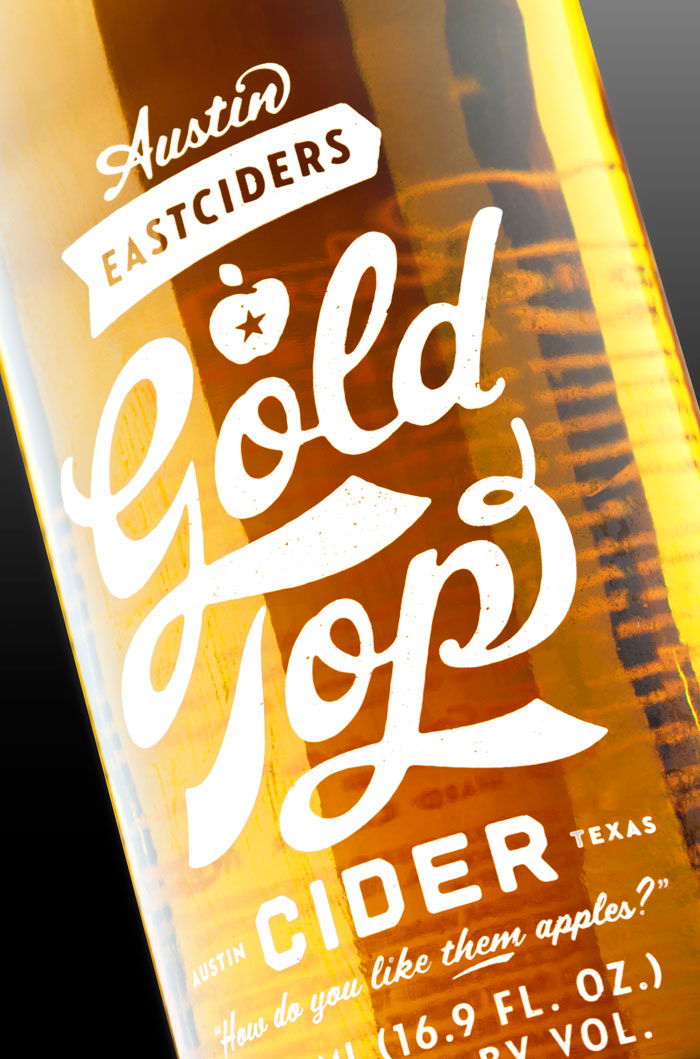 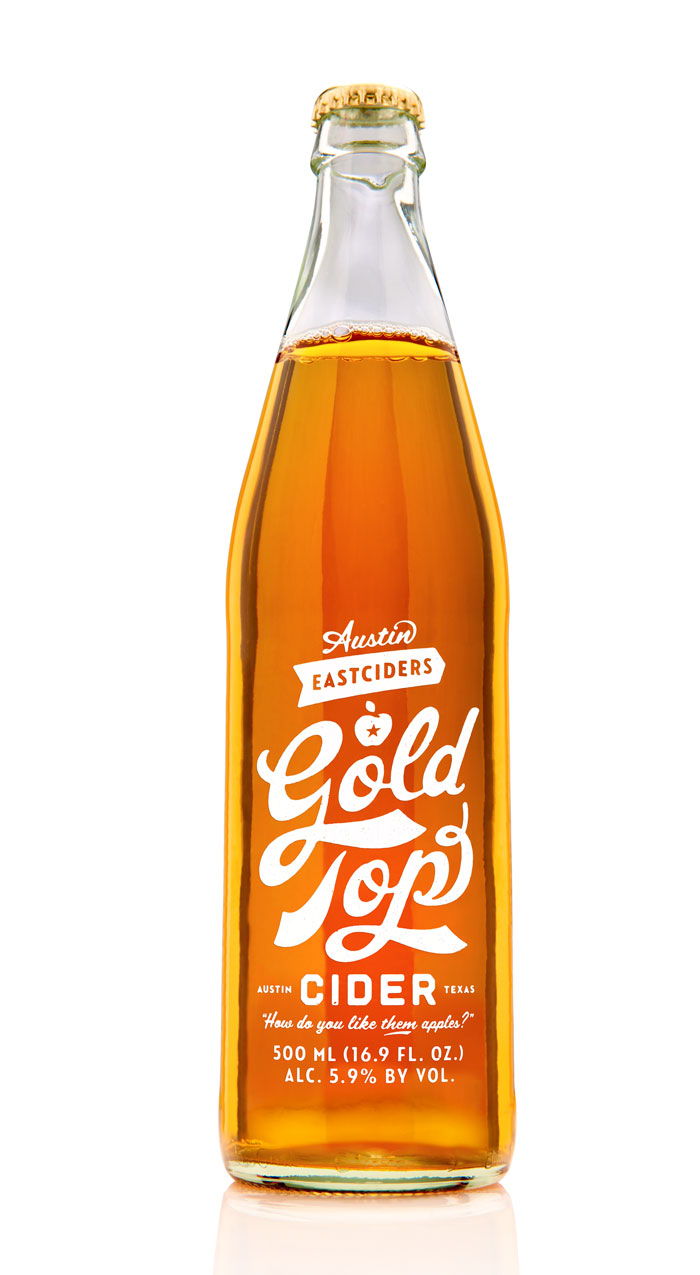 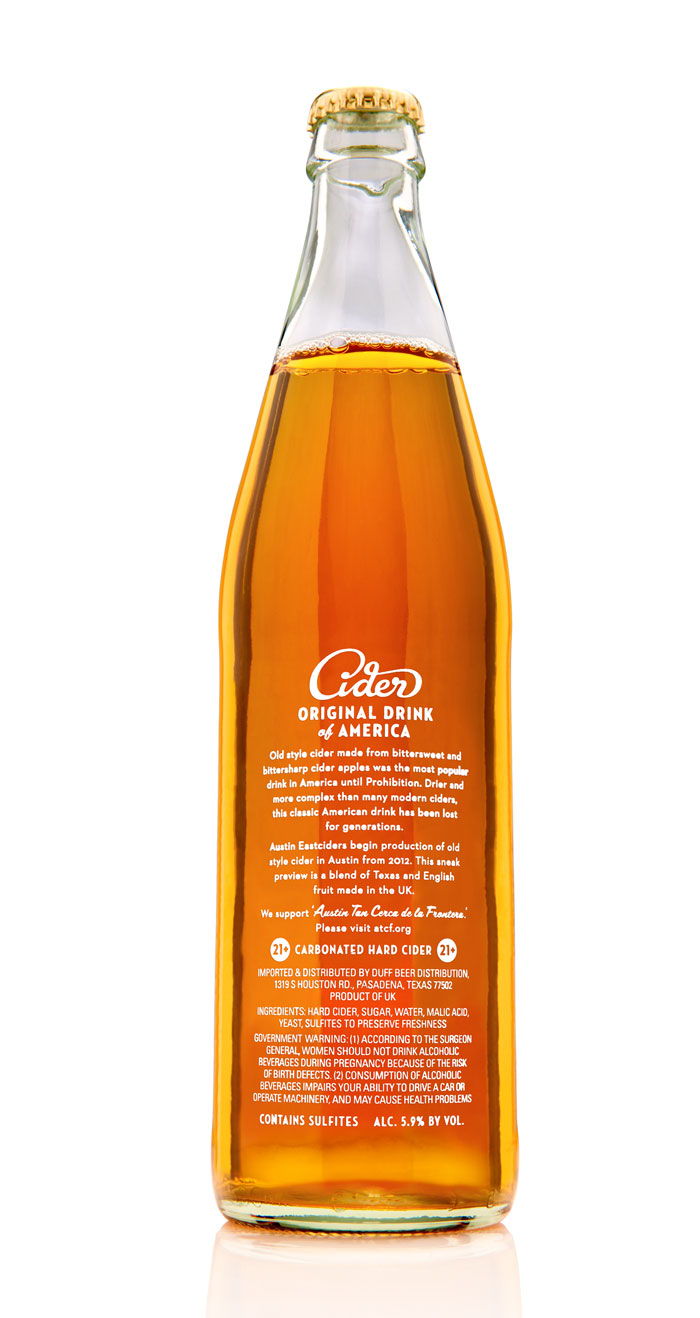