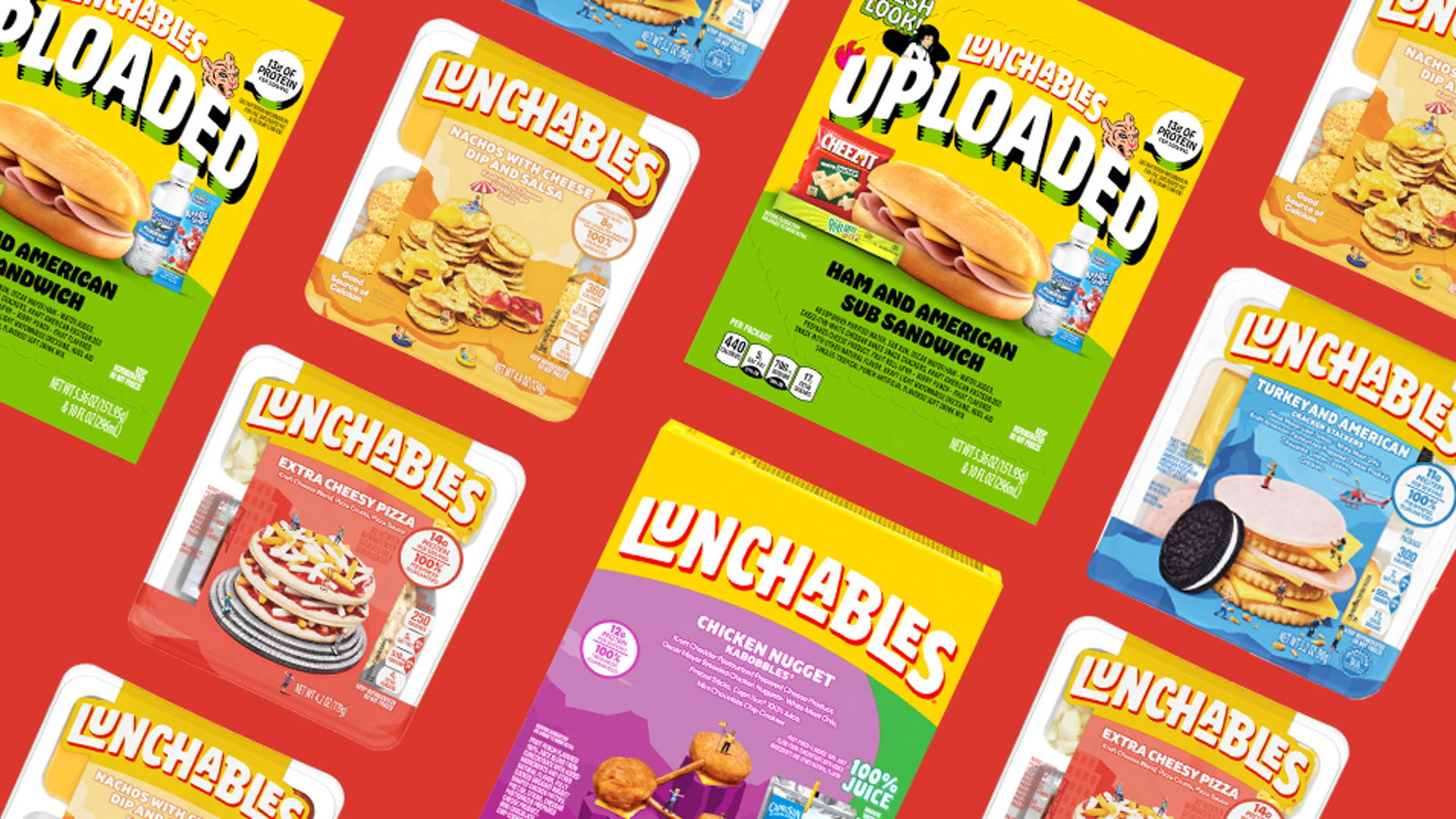 Oscar Mayer introduced Lunchables in 1988, and the pre-packaged set of crackers, deli meat, cheese, dessert, and a drink proved popular with families looking for a time-saving solution to the hurried morning ritual of preparing breakfast and packing lunches. The brand has changed a lot since 1988, addressing nutritional concerns and evolving tastes and introducing new types of kid-favorite meals, like nachos, pizza, chicken nuggets, and all-dessert dipping snack packs.

However, the latest change to Lunchables is its brand identity and packaging by creative agency JKR.

At the core of the new brand identity is recognizing that children are builders; just look at the success of video games like Minecraft and Roblox. IRL toys like LEGO delight kids too, and playing with your meal is part of the Lunchables experience for many youngsters.

“Our team drew inspiration for the Lunchables brand refresh by imagining playful scenes through the eyes of kids,” said JB Hartford, group creative director at JKR, to Dieline. “By keeping buildability at the core of the design, we were able to curate a variety of larger-than-life scenes from a kid-centric perspective centered around fun, real, and buildable food.”

The new logo sticks to Oscar Meyer’s core yellow and red colors but is contemporized and adds playfulness and fun to the brand. Rather than flatten the logo, as many refreshes have done lately, Lunchables adds depth with white shadows and yellow background. The new packaging feature different landscapes, including a sea bed, the city, outer space, backyards, and a volcano, a further nod to the child-like imagination that drives play.

As part of the new focus on building, ingredients get depicted on the front in stacks and piles. JKR then added miniature-sized people lounging, building, exploring, or playing among the crackers, meat, and cheese. Across the range, the mini people are inclusive, with someone in a wheelchair on one box and tiny folks with different skin tones depicted on the same packaging.

Additionally, Lunchables’ website now features a galley of submitted builds and instructions on how to make Lunchables rocketships, fire hydrants, ships, and even a teddy bear called “Lunch-a-builds.” The Lunch-a-builds are part of a campaign developed with creative agency Goodby Silverstein & Partners that includes larger-than-life builds at locations across the country.

Unfortunately, Lunchables did not use the brand refresh to make the packaging more sustainable. The plastic tray and front film remain unrecyclable, with only the outer cardboard box or backer card being recyclable. It may be just as well. Lunchables aren’t the healthiest option for kids, and it turns out it’s unhealthy for the environment too. Successfully explaining the nutritional and environmental ramifications to a child insisting on only eating Lunchables might prove impossible, so you might have to do a Kim Kardashian on this one. But here's hoping they invest in a fiber-based tray in the near future.

Lunchables’ new brand identity can be seen online and in stores now.