Oonami —translating to “Big Wave” in Japanese—thrives on its mission to deliver a huge splash of flavour with its traditionally prepared sake, all while keeping in mind usability for all.

In our research phase, we noticed a particular disconnect between liquor brands, consideration of the environment, and accessibility for the Blind. Despite using the usual glass bottles, liquor brands do not actively encourage any actions to be made for the environment. Some lucky bottles are recycled, however there are many factors that reduces the ability to recycle (such as if they are broken, have too much contamination, or simply wind up anywhere outside of recycle factories).

Glass can take up to one million years to decompose which can consider them even more harmful for the environment compared to plastic waste. On another note, close to none of the labels or packaging of wine and spirit bottles are accessible for the Blind. It takes much longer for someone who cannot see to find the right liquor to take home and always requires a helping hand, which thus can be a very discriminating, especially when they wish to act independently.

As a result, we made Oonami —translating to “Big Wave” in Japanese— which thrives on its mission to deliver a huge splash of flavour with its traditionally prepared sake, all while keeping in mind usability for all. Our final design was created with three main focuses in mind: be environmentally-friendly, be accessible, and be of high-end quality, all while embodying both a sense of Japanese tradition and modernity. Thus as a response to our research phase, we designed Oonami to look and feel utmost luxurious to represent sake in its roots, in three desired flavours— nigori (cloudy sake), umeshu (plum sake), and awa sake (sparkling sake), each to their own unique graphics and textures. Braille is incorporated into the box, bottle, and seed packet. Additionally, the bottles are both visually and textually appealing to the Seeing and the Blind. And of course it was also within our priorities to encourage better use of packaging materials; the box and pack of seeds are recyclable material and they work together with the beautiful and minimal design to give the bottle a second life as a vase. The use of circle imagery and line art portray a traditional Japanese aesthetic whilst using a minimalistic and monochromatic black on white design maintains a sense of modernity. Resultantly, the design approach is innovative for its category and our minimalistic visual solution allows to separate Oonami from its competitors on the shelf. 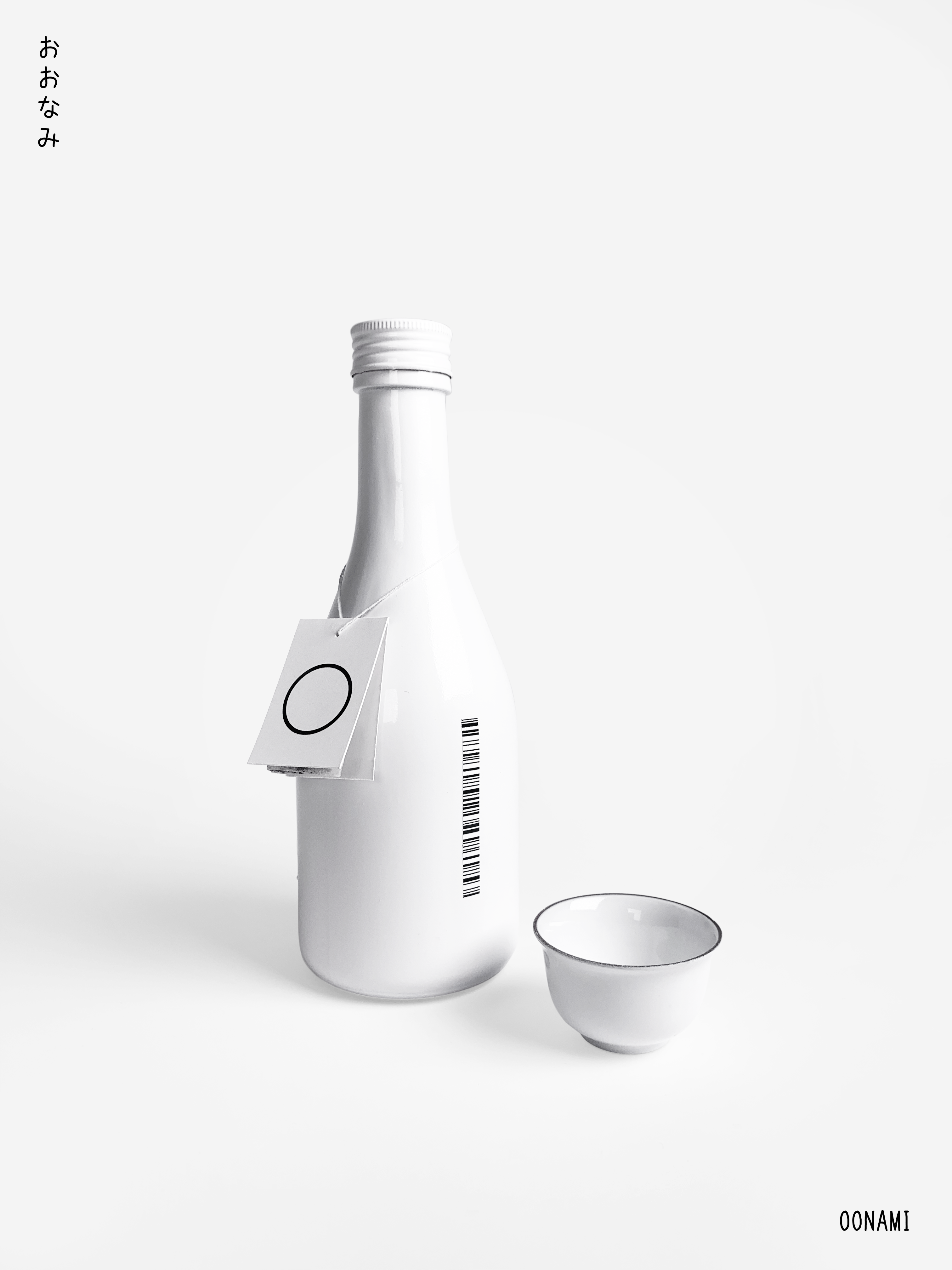 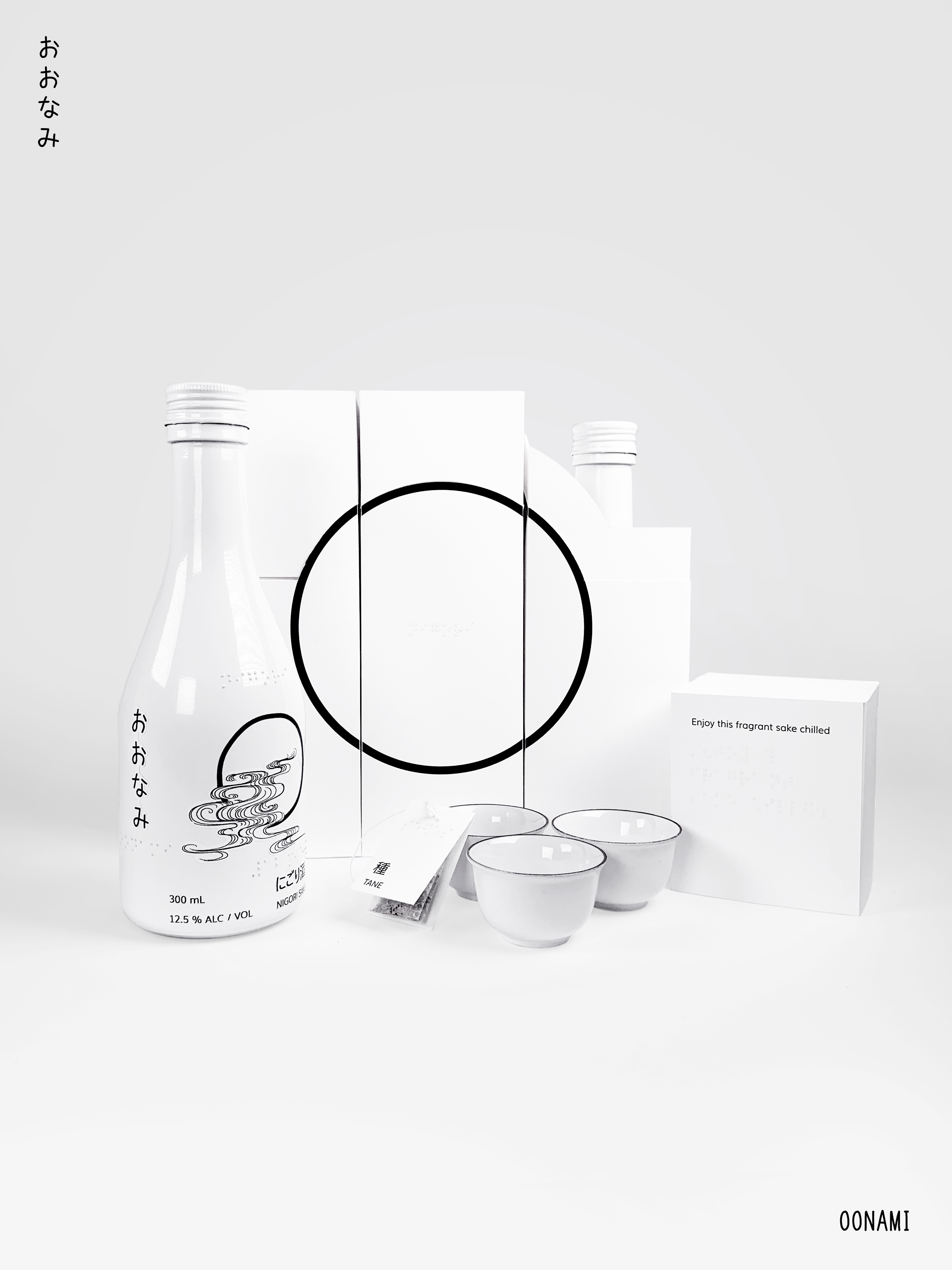 In ancient Japan, sake production was confined primarily to the Imperial court for the emperor or for ceremonial use, thus basely associating sake with purification and royalty. After centuries of production, sake today has ripened into a world-renowned beverage with a variety of characteristics. We hoped that by designing for such a recognized drink with English, Japanese, and English Braille, it would encourage and inspire other liquor brands around the globe to also consider designing their future products with accessibility for the Blind in consideration. Keeping in mind that the bottles being designed multilingual suggests the option open for this brand to be produced in other languages as well, with the hope that being sold internationally would make the impact of our message even stronger.