Ed Sheeran isn’t the only celebrity that pairs fine cuisine with ketchup, but he is perhaps the most likable. The UK singer-songwriter has worked with talented, big-name musicians and producers such as Taylor Swift, Pharrell, One Direction, and Justin Bieber, but his latest collaboration isn’t with a mega pop star, or a TV cameo so bad the writers burned it with fire, it’s an ad campaign for his favorite condiment, Heinz Ketchup.

Sheeran’s love of the sauce has been documented before, in fact, he has a member of his entourage carry a bottle of the stuff to ensure he has on-hand for every meal, whether the restaurant has it in-house or not.

The recording artist also has a tattoo depicting the iconic bottle's label on his arm, a demonstration of how much he loves the tomato-derived sauce. Ed is also on record, saying were he elected Prime Minister of the UK, he’d make bottles of Heinz ketchup compulsory anywhere chips (or fries, dammit) are sold. 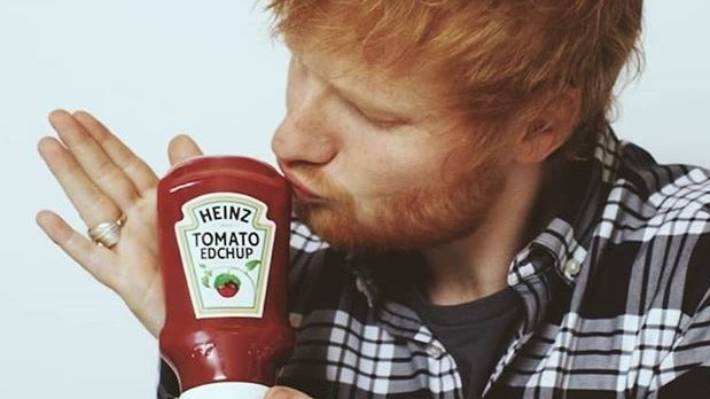 The special edition ketchup bottle goes through the only the most subtle of changes, including  a slight tweak to the tomato on the front, creating a special bespectacled and mop-topped emoji that resembles the British crooner, were he a tomato. Finally, the condiment is renamed “Edchup” in honor of the ketchup’s celebrity fan. Otherwise, the bottle and recipe remains unchanged.

Heinz’s limited edition bottle is accompanied by a new ad starring Ed Sheeran. The ad has Sheeran alone at a white-cloth, fine dining restaurant, and when served his meal, he pulls out a bottle of ketchup, flips it in the air like Tom Cruise in Cocktail, and douses the food in the crimson-hued sauce as the rest of the restaurant gasps in horror. Ed’s real-life tribulations inspired the ad as he would dine in posh, ketchup-free, establishments, which in terms of rock n' roll debauchery is pretty severe.

If you’re looking for a bottle of Edchup, the search won’t be easy as they sold out, due in no small part to the singer’s fan base, also known as “Sheerios.” If you remain undeterred, Heinz advises following their Instagram for updates.

Take Care of Your Bicycle Chains With This Well-Designed Lubricant