Packaging Up The MRE (Meal, Ready-to-Eat)

When troops travel to battlefields, sometimes they have to carry their food with them. These meals must provide enough sustenance for the soldier, must be easy to prepare, be as lightweight as possible and packaged to endure the rigors of combat.

It also has to be palatable. If it doesn’t taste good, it can be left uneaten or lower morale.

Prior to modern preservation and refrigeration techniques, troops often suffered from malnutrition, relying on whatever they could pillage. During the beginning of the Napoleonic Wars (1803-1815), the French government offered a substantial prize of 12,000 francs to any inventor who could develop an effective and inexpensive way to store large quantities of food. This led Nicolas Appert to create a method for preserving food inside glass jars in 1809, the precursor to canning. 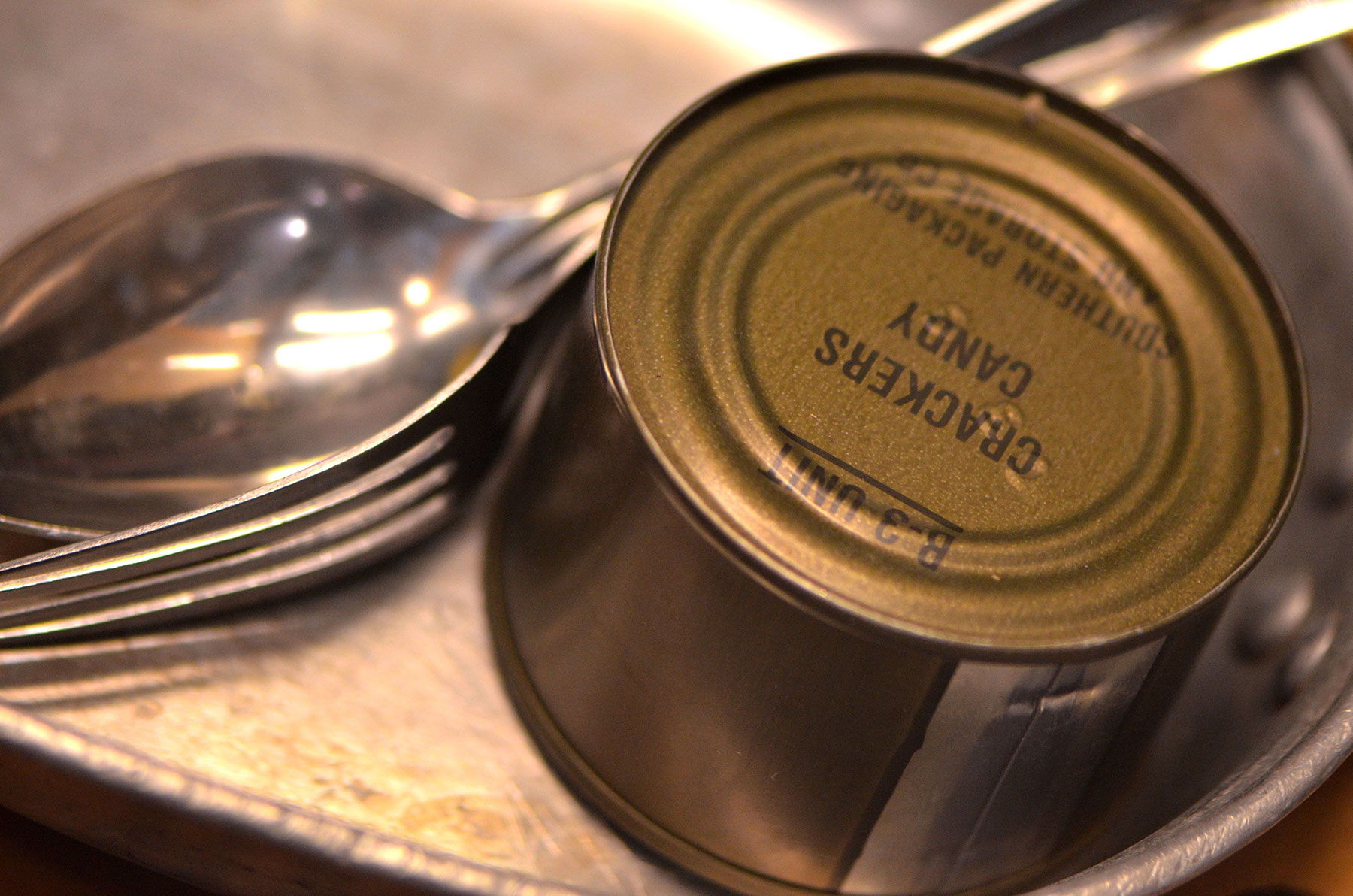 Unfortunately for Napoleon’s Grande Armée, Appert’s innovation would not make it to those troops and they relied on foraging and buying food from locals to supplement meager and unappetizing ration, and when that wasn’t possible (like during the Russian campaign), troops fought over horseflesh, seasoning it with gunpowder.

Canning led to tinned food, a significant breakthrough when it came to feeding troops, allowing militaries to carry safe food with them to the front lines, particularly during the trench warfare of World War I.

Canned food was not without its limitations: it’s heavy, the food wasn’t particularly appetizing, and nutritional needs weren’t as well understood as they are now.

During World War II, the U.S. National Academy of Sciences formed the Food and Nutrition board to investigate issues of nutrition that could “affect national defense.” By surveying mess halls and counting the calories served to soldiers, they discovered that soldiers were overfed, were deficient in minerals, and the food served was too high in fat. They also recommended serving some sweets, because soldiers were buying too many chocolates from the canteen or post exchange. The work of this board set daily recommended values for nutrients and paved the way for the ubiquitous nutritional labeling on the packaged food we see today.

Between World War I and the end of Vietnam, while the contents of field rations improved to meet the needs of troops, the packaging didn't change very much, consisting of cans that proved burdensome to carry. This lead to the development of the current iterations of packaged troop rations, the MRE (Meals Ready to Eat). 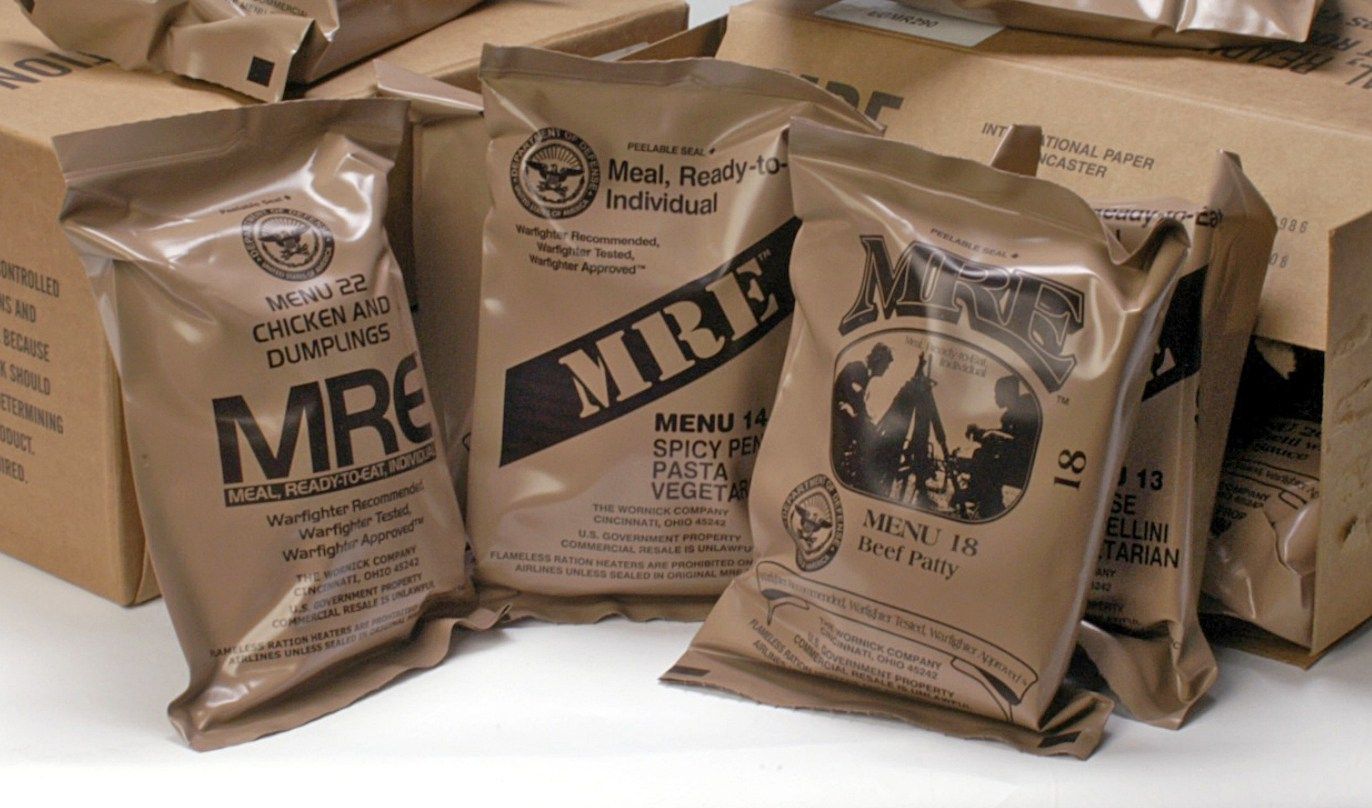 MREs replaced their precursor, the MCI (Meal Combat Individual rations), in 1981 and were a leap ahead in terms of technology and efficiency. MCIs weighed 2.6 lbs and had a volume of 1.5L, MREs weigh much less (about 1.6lbs on the high end), but take up more space, 2.3L, although troops often “field strip” them to save space and reduce weight.

Our armed forces can be asked to serve anywhere in the world, in a variety of climates, so these pouches have to withstand weather extremes across the spectrum, from hot and arid deserts to the freezing cold. They're required to stay fresh for at least three years when stored in temperatures under 80 degrees, and up to six months in temperatures between 81-100 degrees. MREs must also withstand 100-foot no-parachute helicopter drops or 1,200-foot parachute drops from a plane.

Much of the science behind these meal packs have been developed by the Combat Feeding Directorate at the U.S. Army Natick Soldier, Research, Development and Engineering Center (NSRDEC), in Natick MA. They are tasked with continuously improving MREs and updating food packs to meet the demands of modern combat while keeping menu items in line with the palate of today’s soldier. Not only are there are vegetarian options, but with the diverse makeup of the modern military, items like chicken ala king and beef stew have been rotated out for things like chicken burrito bowls and Mexican-style chicken stew. “Chili Mac” seems to get the highest praise, while some like the “vomelet” (cheese and vegetable omelet) sound and look pretty horrendous. 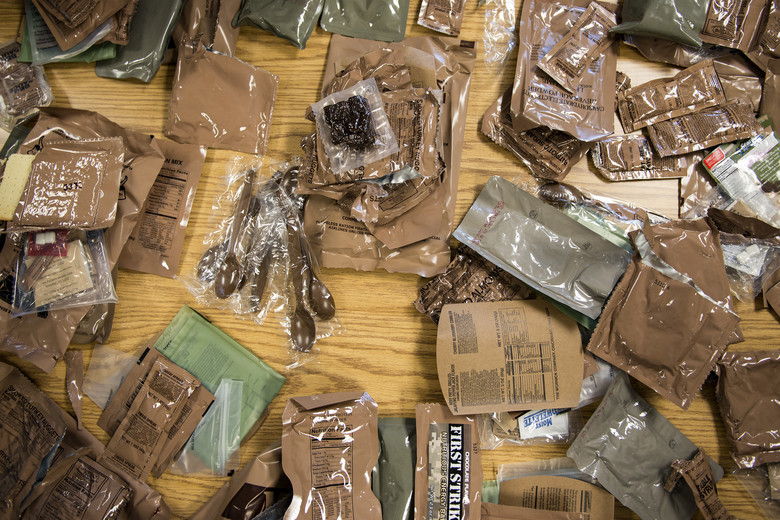 The outer pouch is tan, made out of low-density polyethylene and labeled as an MRE with the menu number and description of the entree on the front. It also comes with a warning that it's government property with a note that the flameless heater is prohibited on commercial flights unless sealed in the MRE bag.

There are two kinds of bags inside that hold the contents of the MRE: retort bags, which house sterilized food, and nonretort pouches which hold foods that don’t require sterilization. Both kinds of pouches have an outer polyester layer, with nutritional information printed on it, behind that another made of foil which keeps out moisture, oxygen and light. This is followed by a polyolefin layer, used to seal the pouch. Retort pouches also have a coating of nylon to withstand the process of sterilization which involves boiling.

In addition to pouches of food, utensils, beverages and condiments, MREs pack a novel solution to reheating food: a flameless heater pouch. This bag contains magnesium, which when a small amount of water is added, creates heat, enough to heat food pouches. The chemical reaction produces magnesium oxide, which is non-toxic and can be disposed of with no detrimental impact on the environment.

While the current iteration of MREs is technologically impressive, the Army hasn’t stopped and continues to research new sterilization techniques and packaging materials to not only make the meal packs lighter, more compact and durable but also improve the taste and meal experience.

One long requested food item since the introduction has been pizza, and while it has taken three decades, military scientists have finally been able to create an MRE variant. Another recent breakthrough is the ability to create a fresh “salad bar” that preserves phytonutrients, compounds thought to help the body prevent disease. These breakthroughs would not only serve to improve the combat effectiveness of troops in the field but can also nourish astronauts in space.

The saying “An army marches on its stomach,” often attributed to Napoleon, is just as valid today as it was in his time. For the scientists and researchers at NSRDEC, the mission of providing meals to troops in remote, sometimes extreme combat areas soldiers on.

Crabtree & Evelyn's 2018 Holiday Collection Is Inspired By the 70s