A series of seasonal small-batch releases from Victoria, BC's Driftwood Brewery.These wrap-around labels feature intricate, sophisticated, eye-catching illustrations, vibrant colour combinations, and unique die lines. This series of products was intentionally designed to follow the "House of Brands" model, with each label bearing very little resemblance to any other label in the series. And yet, the illustration style and unique die lines tie the labels together, creating cohesion across the lineup. 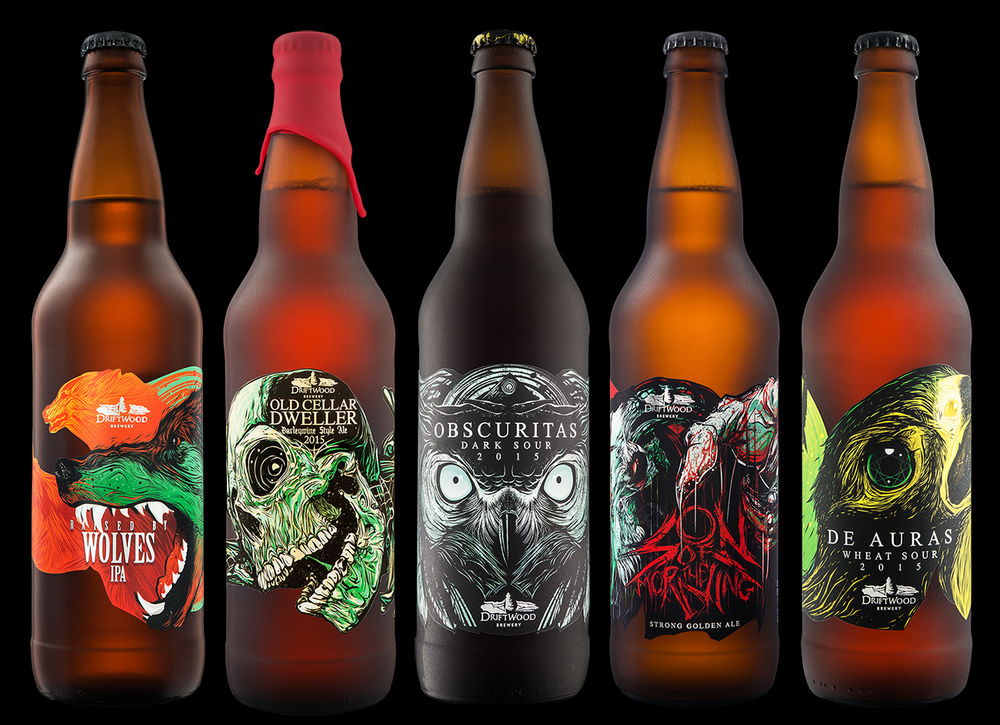 Raised By Wolves Wild IPA: For this Wild IPA from Driftwood Brewery, our goal was to combine a sense of the beer’s fruity flavours with the untamed nature of the yeast. We chose the name Raised By Wolves for its immediate connections to the wild, as well as to suggest a familiar narrative, setting our scene in the jungle. Bright, saturated, tropical colours helped suggest the flavours of the beer while simultaneously keeping our wolves on the right continent. For a final touch, we pushed our die lines into uncharted territories: this label doesn’t just stand out, it pounces off the shelf. 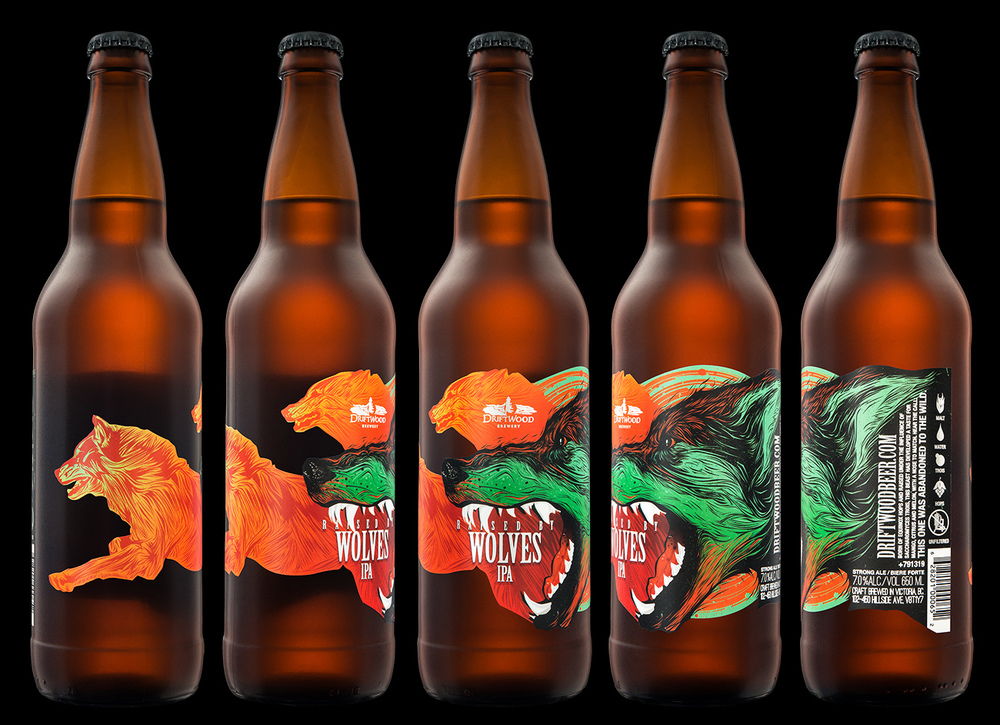 Old Cellar Dweller Barleywine Style Ale: For Driftwood Brewery’s Old Cellar Dweller barleywine, our task was to design a label that showcases the strong character of the beer, while speaking to its aging potential. To these ends, we chose to illustrate our take on a grinning skull, favouring a bold, graphic approach. The die line protrudes with ribs, teeth, and the long outjutting arm bones that create an excess of negative space, at once playful and decadent. Wax dip and gold foil lend the final touches and the spark of life to our skeleton in wait. 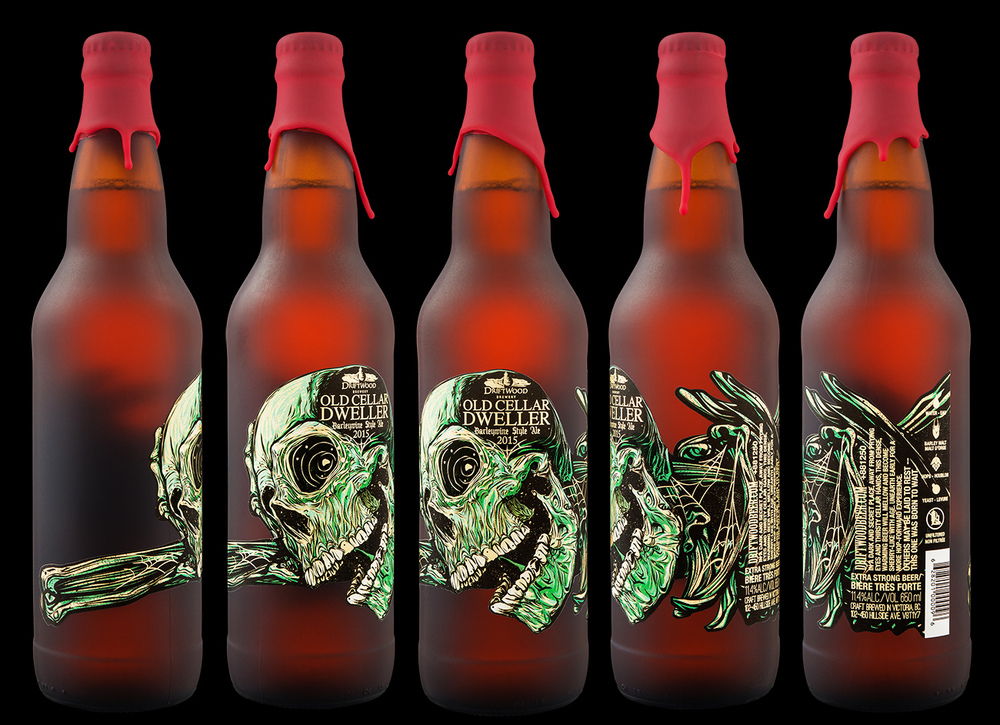 Obscuritas Dark Sour: Part of Driftwood’s Birds of Prey series, our first step in designing this dark sour was to capture the beer’s nocturnal spirit in avian form: the great horned owl. The packaging design uses symmetry and a high-contrast, restricted colour palette to highlight the night-hunter’s predatory eyes. Survival instincts kick in, and we can’t help but notice the bottle that stares back at us from a shelf. Our approach to naming this beer was to evoke the owl’s dark, mysterious nature, while retaining its exalted position, using an invented word that embodies the individuality of this dark sour. 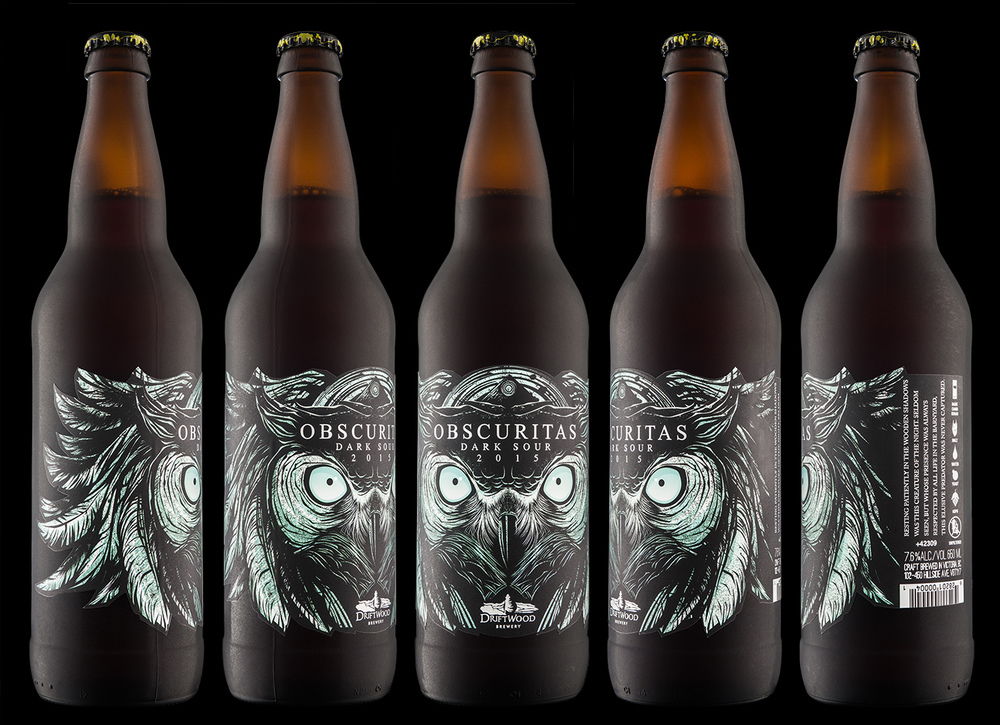 Son of the Morning Strong Golden Ale:"Make it EVIL" - that was Driftwood Brewery’s only request for their intense Son of the Morning strong golden ale. We decided to approach the label as if it were an album cover, drawing on old-school brutal death metal from the early to mid-90s. In order to graphically render the gory and grotesque while retaining legibility and an iconic sensibility, we paid special attention to colour design within a classic triangular composition. This allowed us to push the limits with our textures: sticky, oozy blood, rotting bone, ancient, melting flesh, spatter, jagged, splintering wood… 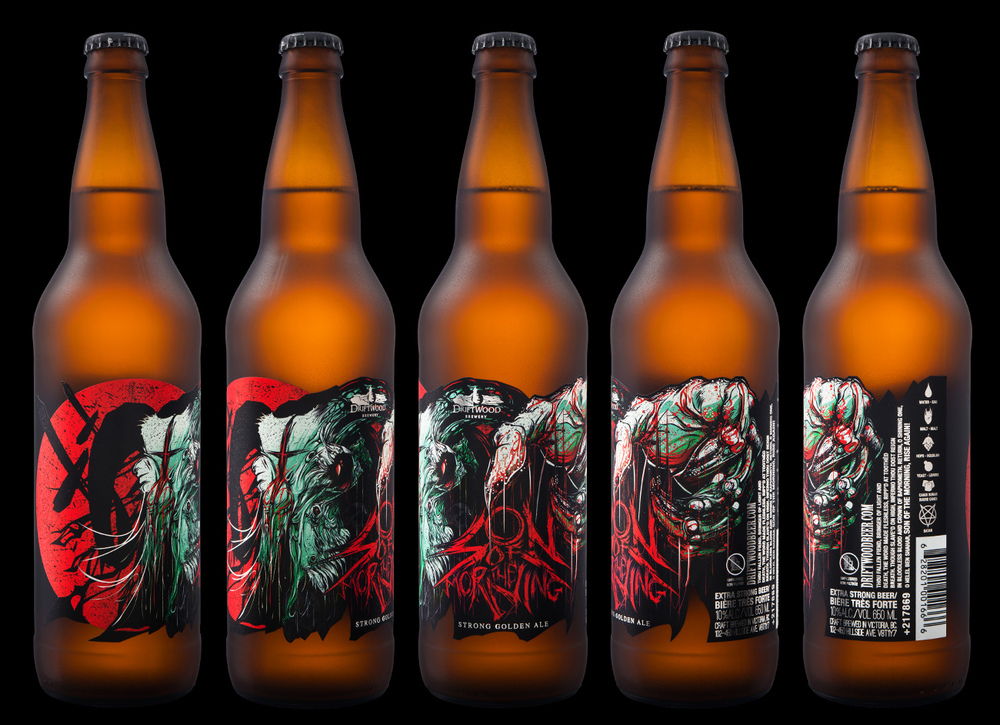 De Auras Wheat Sour: For our second contribution to Driftwood Brewery’s "Bird of Prey" series of sour beers, our first task was to choose a bird that befits this wheat sour. We decided on the peregrine falcon, whose name means “through the field” and “sickle,” and who is renowned for high-speed aerial attacks. We created the name De Auras, resonating with the Bird of Prey names, and whose elevated nature causes narrative tension when set against the violent imagery. To contrast with the balanced, iconic stare of Obscuritas Dark Sour, we decided to illustrate the peregrine falcon’s unnerving sideways leer. The extreme close-up of the one eye adds a sense of dynamics and speed by contrasting with the violent silhouettes viewed from afar, their background echoing the eye. 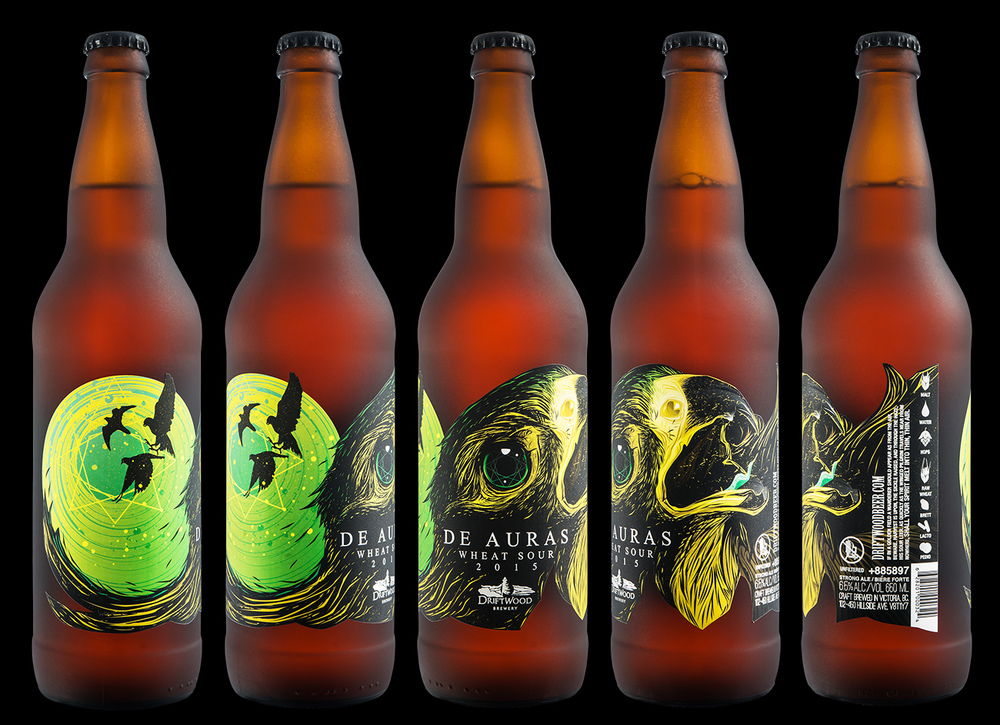