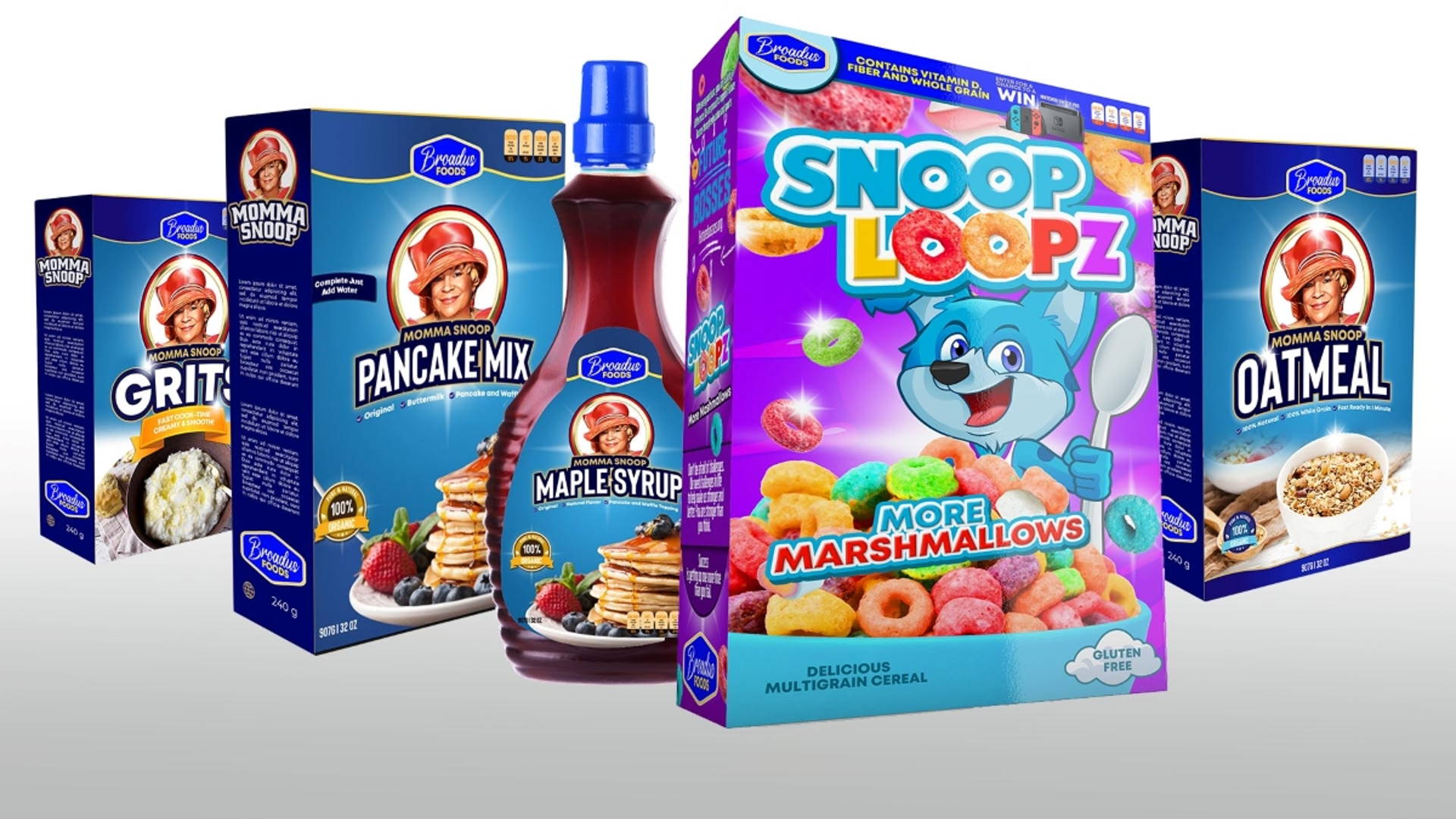 The range, which uses Snoop’s real last name, launches with breakfast staples like pancake mix, maple syrup, grits, and oatmeal under the Mama Snoop brand and Snoop Loopz breakfast cereal. Broadus Foods aims to inspire diversity in the industry and give back to communities by supporting charities like Door of Hope, a non-profit addressing the unhoused crisis in Los Angeles.

Mama Snoop is inspired by the "Gin and Juice" artist’s late mother, Beverly Tate. Mama Snoop’s logo and packaging feature a portrait of Tate framed in red and gold. The rest of the packaging uses different shades of blue on the box, perhaps a nod to Snoop’s crip affiliation. Classic touches like food photography also get utilized on Mama Snoop packaging. The light bursts used throughout the packaging give the packaging some additional bling.

Snoop Loopz also follows breakfast cereal convention with a furry, smiling mascot behind a giant bowl of sugary cereal. Cereal Loops fall from the sky, with light bursts generously used throughout the design. The back of the cereal box features games and affirmations like “Don’t count the days, make the days count,” and “Your superpower is you.” The front of the box proclaims “more marshmallows” but doesn’t say compared to what, nor is it clear which cereal bits are marshmallows and which get made using grain.

On an Instagram post sharing the new Snoop Loopz, Master P said, “We're taking over the breakfast game. When we say more marshmallows, we mean you won't have to go on a treasure hunt looking for marshmallows in Snoop Loopz. We got the hookup! Our cereal is gluten-free. Also, look out for the new Honey Oat flavor coming soon!”

“The more we make, the more we give. They can't beat us, so they might as well join us. We are adding diversity to the grocery stores while educating our people on economic empowerment at the same time,” Master P added.

Snoop Dogg and Master P are no strangers to food-related ventures. Snoop and longtime friend Martha Stewart host Martha & Snoop's Potluck Party Challenge on network VH1 and is the author of From Crook to Cook, a hip-hop cookbook. Master P is active in several food projects, including Snow Cones, Soldier Snacks, and Claudeos, named after his grandfather.