If you've ever had the pleasure of watching one of the most renowned contemporary pieces of cinematography titled Hot Rod, then you've undoubtedly seen the scene in which Rod Kimble and Kevin Powell spend over a minute saying (singing?) "cool beans" to each other. If so, you'll appreciate this coffee beverage.

Designed by Studio Unbound, Cool Beans is a beverage for those too mature for their old energy drinks but too young for a bland coffee. Additionally, the packaging itself is anything but dull, inspired by the color and texture of coffee beans themselves. And, when paired against the vivid label color, the matte black truly shines through.

Each flavor is paired with a different identifying color, and the illustrations further differentiate each flavor from the other. Unlike your past energy drinks, this is a bottle you'll feel proud to carry around. 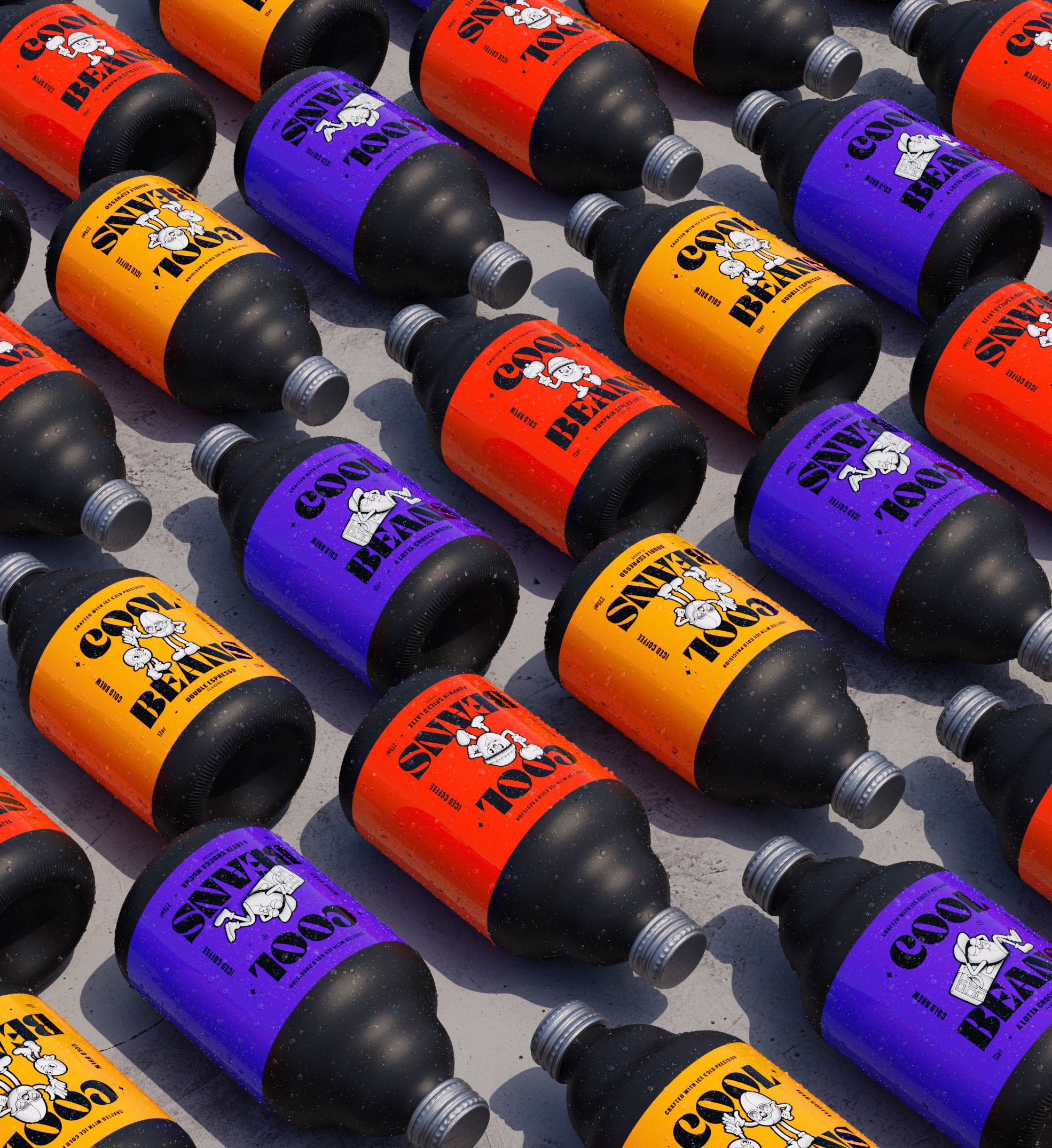 ?Do energy drinks give you the ‘ick’? Sure, you drank them in your youth but you’re more mature now. More sophisticated, but you don't see yourself perched comfortably in Costa Coffee. You’re somewhere in the middle and during this hot summer, you need something to compliment that spring in your step.

Cool Beans is a deliciously ‘cool’ new iced coffee brand which is available in three delicious flavours; double espresso, chocolate mocha and pumpkin spiced latte. Studio Unbound sought to bridge the gap and to capture the audience who have outgrown the energy drinks stage but who are still out there and on the move.

Cool Beans jumps off the shelves with their super glossy labels, beautifully contrasting the matt black glass bottles. The bottle's colour & texture are inspired by roasted coffee beans, the flowing curvature of the neck is inspired by the crack in the centre of the bean. The labels are a bold pop of vivid colour and are the perfect contrast against the black bottle, this doesn't only make them pop on shelf but make it easy to navigate the different flavour choices and remember your favourites!

The robust, contemporary type frames the scene for each character making them the hero of the label. The cool beans characters, who are inspired by late 80s early 90s hip hop (think Saved by The Bell meets Fresh Prince of Bel-Air). This captures the idea that the beans are both literally and figuratively ‘cool’. Each flavour of the coffee has its own character of bean which is representative of the flavour inside. For example, double espresso, we have two super fresh beans giving each other a high five, The pumpkin spiced latte has a cool bean spinning a pumpkin on his finger like a basketball and the chocolate mocha, we have a cool cat leaning back on his boombox which doubles as a bar of chocolate.

Overall, Studio Unbound has created a brand and piece of packaging that goes against the sector's norms creating something that feels ‘deliciously fresh’ Studio-Unbound is a small-but-mighty branding studio that works with aspiring founders of FMCG brands. They always try to deliver work that’s a little different, breaks the mould, and demands to be noticed.