Malaria Gin is beautifully packaged in an elegant bottle featuring an artfully illustrated label. While the name of the gin might, at first, throw you off, it comes from the history of the drink regarding the British troops and how they managed to stay alive in the unhealthy conditions of their camps. Designed by Studio Sinner, whose greatest virtue is turning designs into art, has done an impeccable job of carrying out their mission with this bottle design. 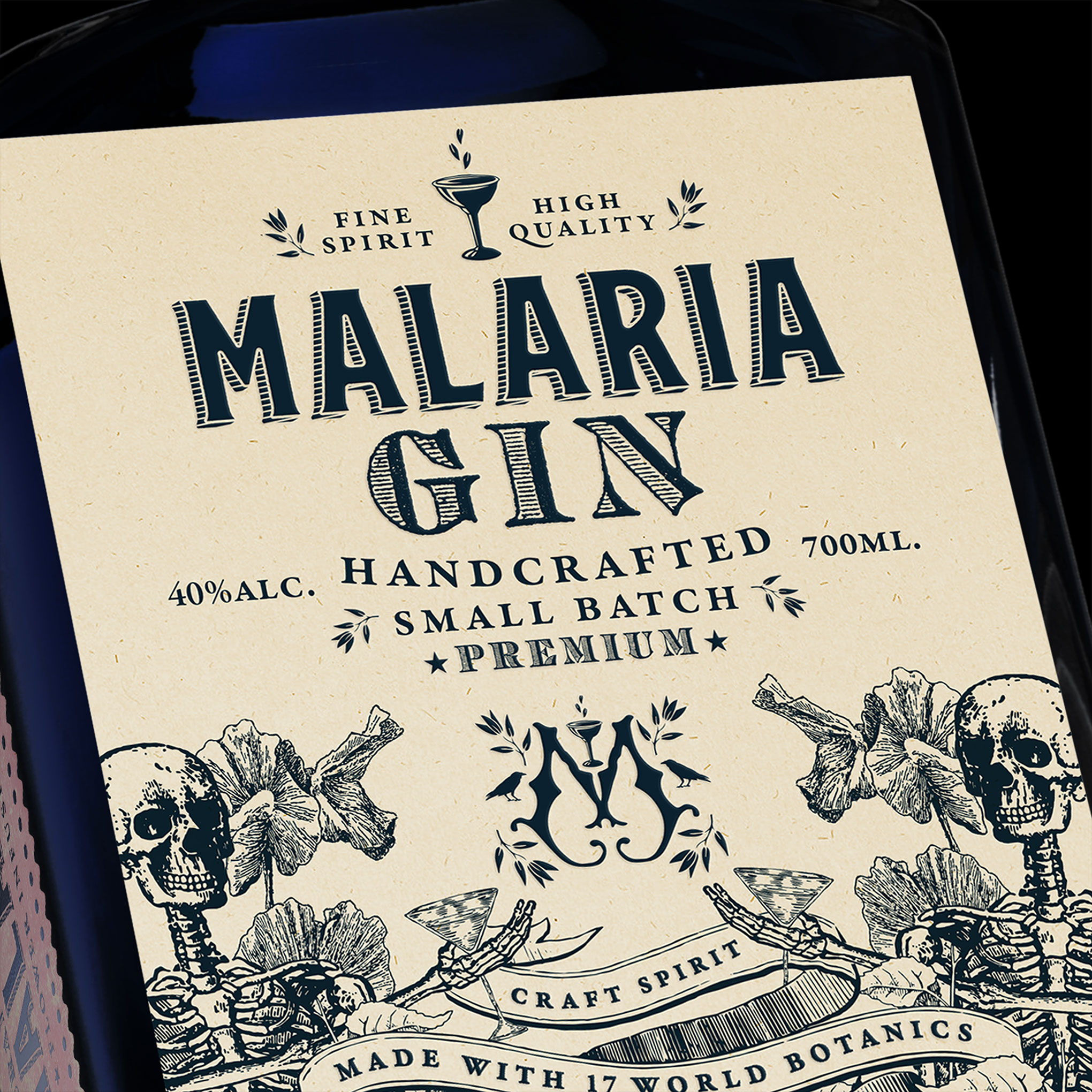 Studio Sinner is located in Mendoza, Argentina carrying out works for different countries around the world, its transgressive designs, its great creativity and elegance, attract the attention of any consumer of spirits, carrying out brand identity developments, which differ from the competence. They describe themselves as their name implies, "sinners" whose greatest virtue is turning designs into art, artists who carve their souls on each canvas, for them designing is their only way out of this forbidden freedom, they are not saints, they are sinners.

Among his designs we find Malaria Gin, a gin that pays tribute to the magic of mixing ingredients to achieve results that make history. A gin of great aromatic intensity and gentle attack, initially it refers to floral notes, juniper and herbs, on a subtle base of spices and a moderate sweetness. In a second nose, the citrus fruits begin to feel amalgamated with complex spicy notes. Short to moderate persistence, its after taste is friendly, with delicate notes of flowers and herbs. Classic as a lid seal.

Malaria Gin is the result of an insatiable search for a product that stimulates us more than one sense at the same time, 17 botanicals of the world, 4 distillations, Infusions with flowers and cold, resulted in a 100% natural gin.

Let's remember some concepts to better understand the product we are talking about, gin as you will know is an alcoholic drink, distilled that has a predominant flavor of nebrinas, the fruits of the juniper. Gin is one of the broadest categories of distillates, with diverse production regions, styles, and flavor profiles, all shared by juniper gals. Contemporary gin is produced in different ways, from a wide range of herbal ingredients, leading to a number of different styles and brands. After juniper, gin tends to be flavored with botanicals / herbs, spices, flowers, or fruits, or often a combination of these. It is most often consumed in a mixture with tonic water.

But as if we were children, the question is, why? Why is it consumed that way and what is the story behind Malaria Gin.

In the 1840s, British soldiers and citizens residing in India used 700 tons per year of quinine powdered bark - a tree recognized as an antidote to malaria that was first tested on the Countess of Chinchón - which was imported from the Spanish dominions in tropical America.

Quinine is bitter, so to make the powder remotely drinkable, they mixed it with sugar and water. Thus was born a medicinal soft drink, the "indian tonic water", which still appears in modern tonic cans.

But something was missing. The bitterness of the quinine didn't stop with the cane sugar. The soldier's courage was not enhanced by a few drops of tonic water; alcohol was a more effective ingredient in mitigating bitterness and instilling courage. Ideal to withstand the very long war campaigns in the British colonies. It became the drink of choice for Anglo-Indians and kept British troops alive. It enabled officials to survive in the unhealthy, humid lowlands of India, and eventually made it possible for a stable British population to thrive in the tropical colonies. We can say that when we link two worlds, the inevitable happens: explosion, magic and fusion.Malaria Gin is the result of an insatiable search for a product that stimulates us more than one sense at a time. 17 botanicals in the world, 4 distillations, infusions with flowers and cold, resulted in a 100% natural gin.

Herz Uber Kopf Was Designed For The Youthful Explorer