Based in Burlington, Vermont, Halyard Brewing Company has released their alcoholic ginger beer with packaging by designer Brendan Fossi. With fruity and island-inspired flavors, the brand needed packaging that could match the aesthetic. The Breeze can features a retro-island font, while the Volcano Juice can sticks to a more classic Sans-serif typeface. Halyard Brewing Company's cans are perfectly colorful and nautical, and now that it's almost summer, I can easily imagine these cans by my side whether I'm sitting with my feet dipped in the pool or after a long grueling hike. 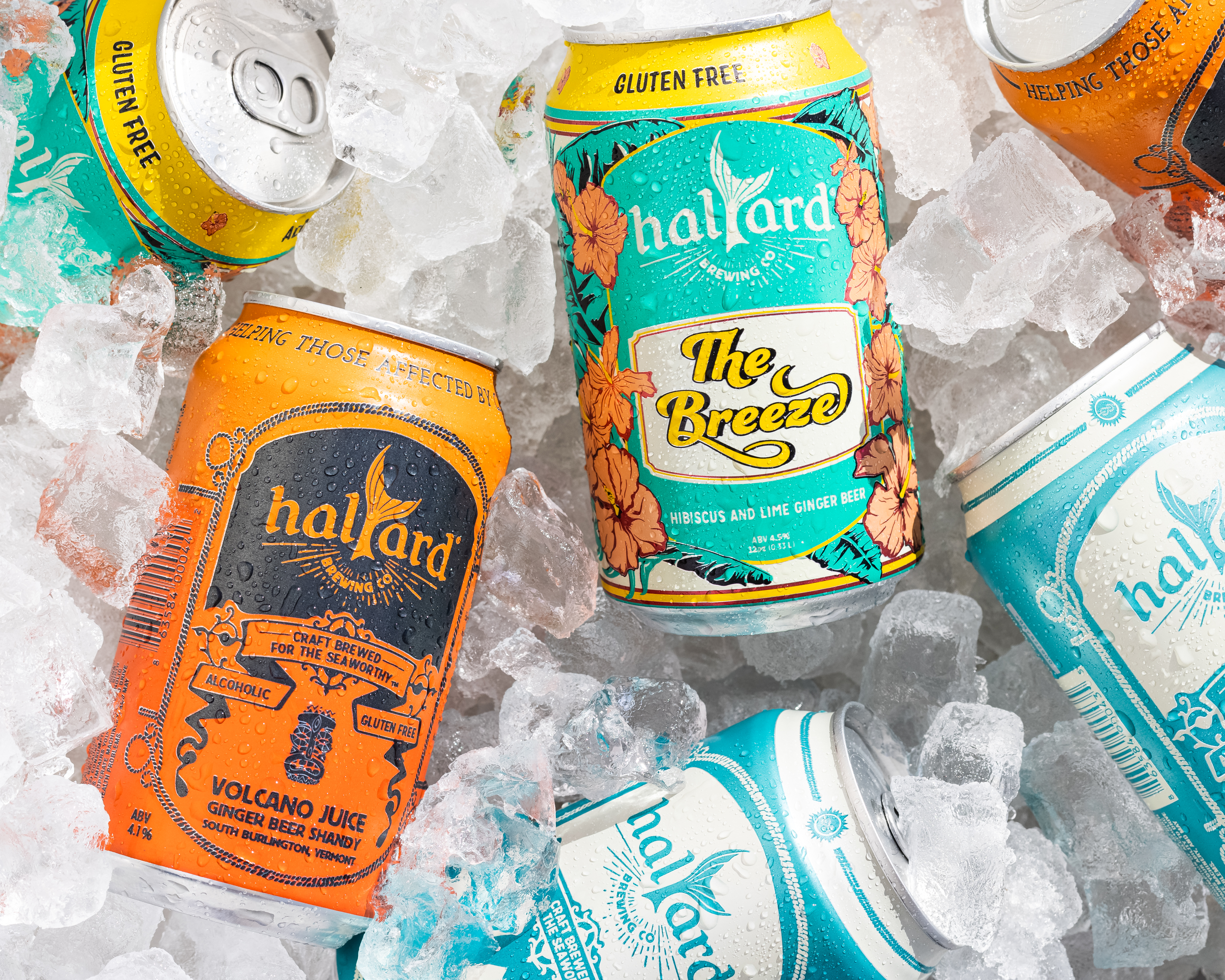 Built upon recipes that date back to the 1750s, founder and head brewer Kenneth Richards is reviving a pre-prohibition era ferment, using organic and fair-trade ingredients to brew alcoholic ginger beer, perfect for sipping all spring + summer long. Introducing a lesser-known category to both the modern craft beer drinker and wellness-driven consumer of hard seltzer and kombucha, Halyard pulls its origins from the colonial spice trade, where ginger from southeast Asia and cane-sugar from the Caribbean were fermented to produce a mildly alcoholic and wildly popular drink, the “original” ginger beer.

In the 1920’s, the US Prohibition against alcohol put a stop to the production and sale of ginger brew, leaving it largely forgotten until now. Founded in 2016, Halyard has worked tirelessly to rediscover the craft and lost art, and is growing its footprint to make this arcane yet exceptional beverage available to a wider audience. Named after the rope used for raising and lowering a sail in sailing, Halyard speaks to the brand’s passion for adventure and the cultural journey of the fiery rhizome: ginger.

Halyard’s brews can be enjoyed on their own, on ice with a squeeze of lime, or in a hand fashioned cocktail. Highlights include:

"As makers, travelers, and adventurous folk, we are fascinated by the opportunity to revive a forgotten ferment," says Richards, speaking about his small and dedicated team. "How can something that was apparently so ubiquitous 150 years ago, be almost completely absent today? I am both daunted and excited by the chance to lead the company that reintroduces American craft ginger beer to the U.S. market.  I want to set the bar really high. This is why we use organic ingredients, U.S. grown evaporated cane sugar (you know, the good stuff), and naturally ferment our ginger beer in the craft beverage tradition."

Halyard brews from its original brewery in South Burlington, VT, producing year-round, seasonal and collaboration brews. This year, they are partnering with SingleCut Beersmiths and Shacksbury Cider, utilizing their facilities to expand production. Halyard can be found at retail partners (in the aforementioned markets) including Whole Foods, Trader Joe’s, Publix, Hannaford and more.