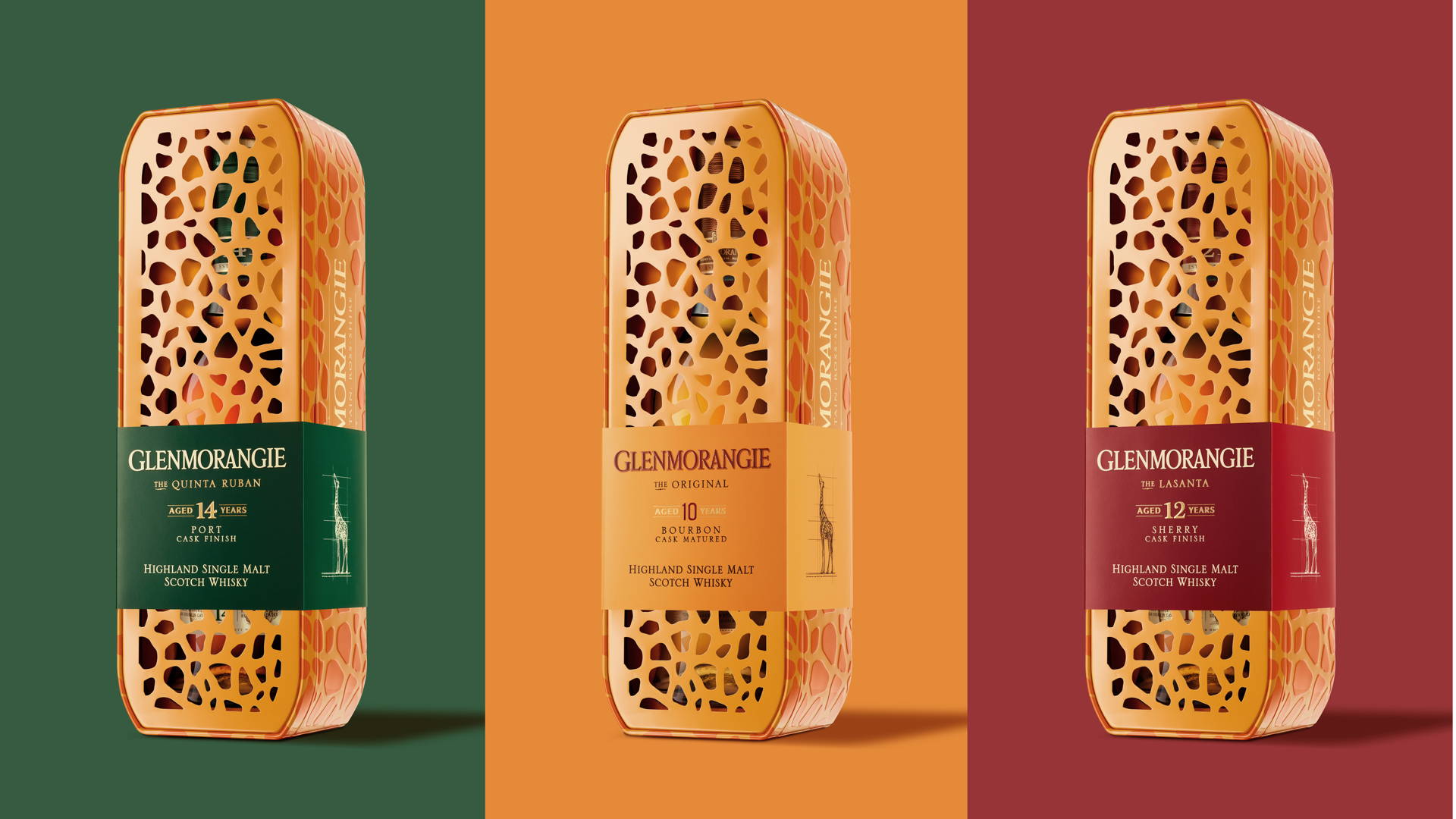 You might not immediately think of whiskey and giraffes going together, but once you see the packaging design for the Giftable Giraffe Tin for Glenmorangie, you might consider them the perfect pairing. Utilizing the pattern of a giraffes spots, the box containing each malt variant is cut out, allowing the consumer to see the stunning spirit inside. The font along the side of the box runs horizontally, another nod to the height of the majestic creatures.

Each malt is distinguished by the color of the wrap-around label, with each color chosen to stick out in stark contrast to the oranges of the box.

However, it is not just the obvious design cues that allow the Giftable Giraffe Tin for Glenmorangie to be a charming homage to these animals. Through the overall poise and grace of the design, giraffes are honored through this spirit's design.

The Highland Distillery of Glenmorangie is famed for its imaginative approach to whiskey-making and having the tallest stills in Scotland, which create its famous smoother, lighter spirit. We were approached to create a gift pack to house their three core single malts: Glenmorangie The Original, The Lasanta and The Quinta Ruban. The pack had to communicate the brand story of the tallest stills, whilst being eye-catching and giftable.

The giraffe has long been the unofficial mascot of Glenmorangie as the necks of their copper stills are the same height as a male giraffe. Our approach was to bring this much beloved, but underused symbol to the fore to deliver the necessary disruptive presence on crowded gifting shelves.

Coloured Glenmorangie’s signature ‘Orangie’, the limited-edition tin is hard to miss. On the side, an embossed giraffe pattern makes the tin texturally and visually engaging. More traditional, heritage elements such as the distillery name printed in embossed varnish contrasts with the contemporary quirkiness of the giraffe-print, delivering quality reassurance. Whilst through the die-cut giraffe pattern front, you can catch a glimpse of the bottle inside, like a giraffe peeking through the foliage, enhancing the gifting experience. As a finishing touch, on the reverse of the tin, we created an illustration of the giraffe standing head-to-head with Glenmorangie’s signature copper stills, emphasising the link between the giraffe and Glenmorangie.

The tin marks the start of a ground-breaking 3-year partnership between Glenmorangie and the Giraffe Conservation Foundation and the Royal Zoological Society of Scotland, supporting efforts to protect this majestic animal.

In keeping with this spirit of conservation and our own Butterfly Cannon, Conscious Design process, the design allows for one tin to be used for all three variants, reducing manufacturing processes and costs of goods. The three variants are differentiated by block-colored bands which give great stand out on shelf: classic orange for Glenmorangie Original, forest green for Glenmorangie Quinta Ruban and a rich sherry red for Glenmorangie Lasanta. The contrast is disruptive yet maintains the balance of proudly showing Glenmorangie’s heritage.