From a young age, society teaches girls that “that time of the month” is a source of shame; something to hide; and certainly never to be spoken about. When, if ever, it comes up in conversation, periods are abstracted to the point of absurdity: “a visit from Aunt Flo” “the red badge of courage” “on the rag” or “shark week.” Such language stigmatizes a very natural and awesome ability of womanhood.

It’s time to wake up.

Cora, a rising star in the $6B category of feminine care, is taking tampons to the next level: using their product line as a living billboard to challenge beliefs and awaken women to a category that, as founder Molly Hayward says, is “frankly, fucked.” What better way to do this than through Cora’s packaging—its most public and essential ‘interface’ with customers?

In early 2019, as Cora prepared to to hit shelves at Target, CVS and other mass-market retailers in its third wave of growth, the San Francisco-based company’s brand equity was the highest in its surging category—particularly among discerning women willing to pay a premium for organic goods, a values-driven corporate ethos, and a one-for-one global giving model. Yet, as both Founder and Chief Brand Officer, Molly wasn’t satisfied. 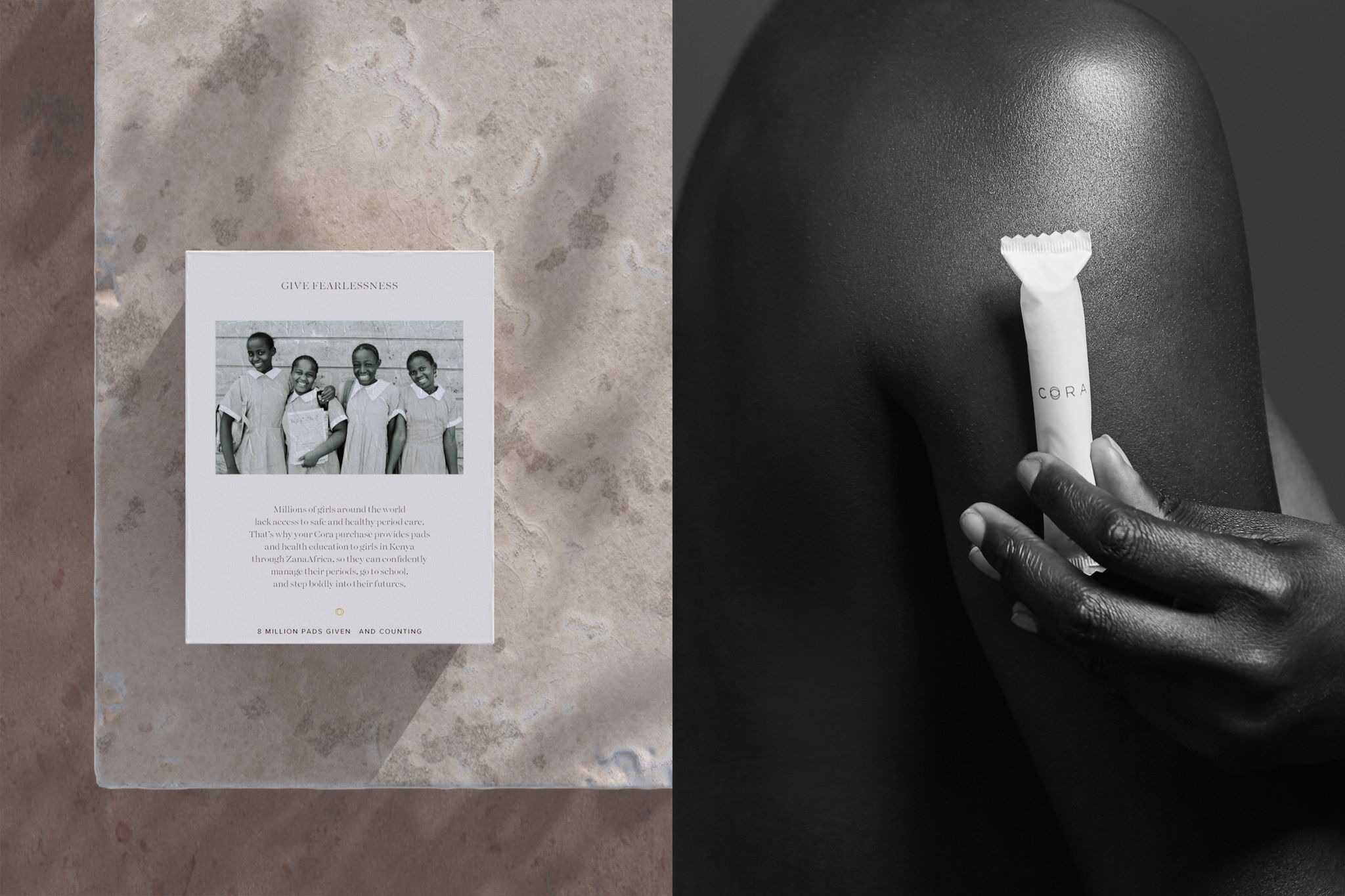 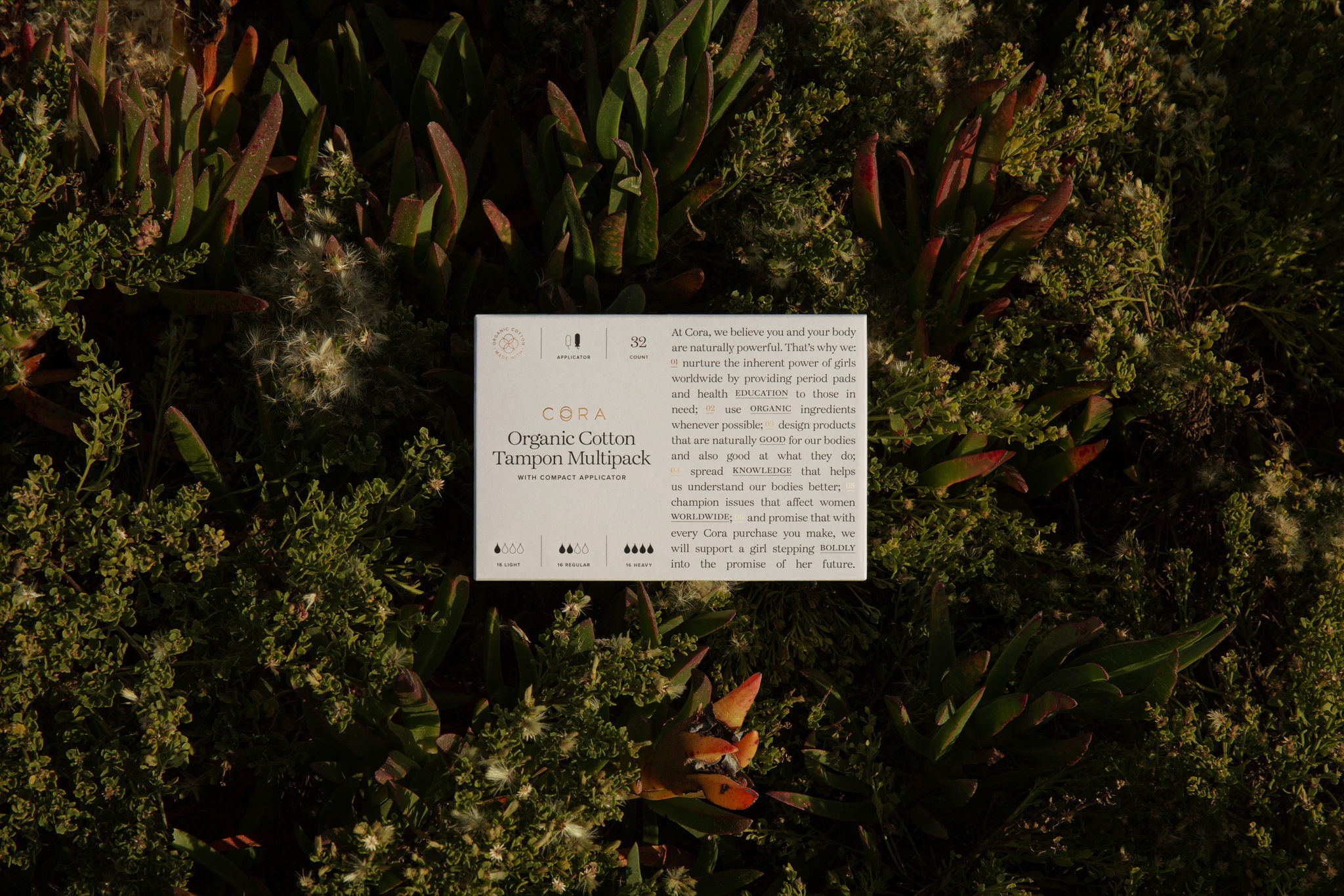 Instead, in this growth moment, she saw an opportunity to not only reach more customers; but, more importantly, to help women realize their natural power. The only problem? To Molly, the old packaging communicated half this promise. With its white, reductive design and organic messaging, the design had the “natural” part down pat. But in a market where organic-signaling has become commonplace, Cora knew it was imperative to tap into its more emotionally potent mission: revolutionizing women’s sense of self-worth. And yet, the sense of pride and power that comes with such self-confidence felt diluted, if not absent altogether.

What is a more modern expression of female power?

How could Cora’s brand and packaging better reflect it as a positive force for change?

“Fuck frills. Fuck flowers. Fuck old tropes,” as Molly says, that infantilize, hyper-sexualize, or mechanize the powerful force of the female body. By focusing on the brand promise with the Cora team, we defined a new form of this power: a radical acceptance of one’s experience and the confidence to see it without fear or shame. This requires an absolute clarity of perspective, the courage to assert it without apology, and the integrity to live into it, everyday.

We made this perspective our creative starting point—orienting and expanding the brand around the power of words and actions. First, we wrote a brand manifesto and placed it upfront on every box, allowing Cora’s point-of-view to take center-stage throughout its entire product suite—from tampons to liners, nipple balms to bladder care—no matter the size, shape, and type of good. In an era where words and actions matter, this systemic solution is a living commitment—writ large at every point-of-purchase—speaking directly to the 70% of Millennial customers who make purchase decisions based on a company’s beliefs and values.

We then carried this idea across all sides: emphasizing simple ingredient lists, the company’s global impact, and its sustainability measures as key essential messages. Lastly, and as a final fuck you, we questioned the whole navigational system of feminine care products and broke with default codes and meaningless absorbency norms; instead, introducing a new design strategy that allows for the product specs to be more understandable, immediate and scannable on shelf.

Altogether, the solution not only amplifies the best of what Cora believes as a brand; but, more importantly, aims to shift perceptions—and the feminine care industry—from a source of shame to a point of pride. 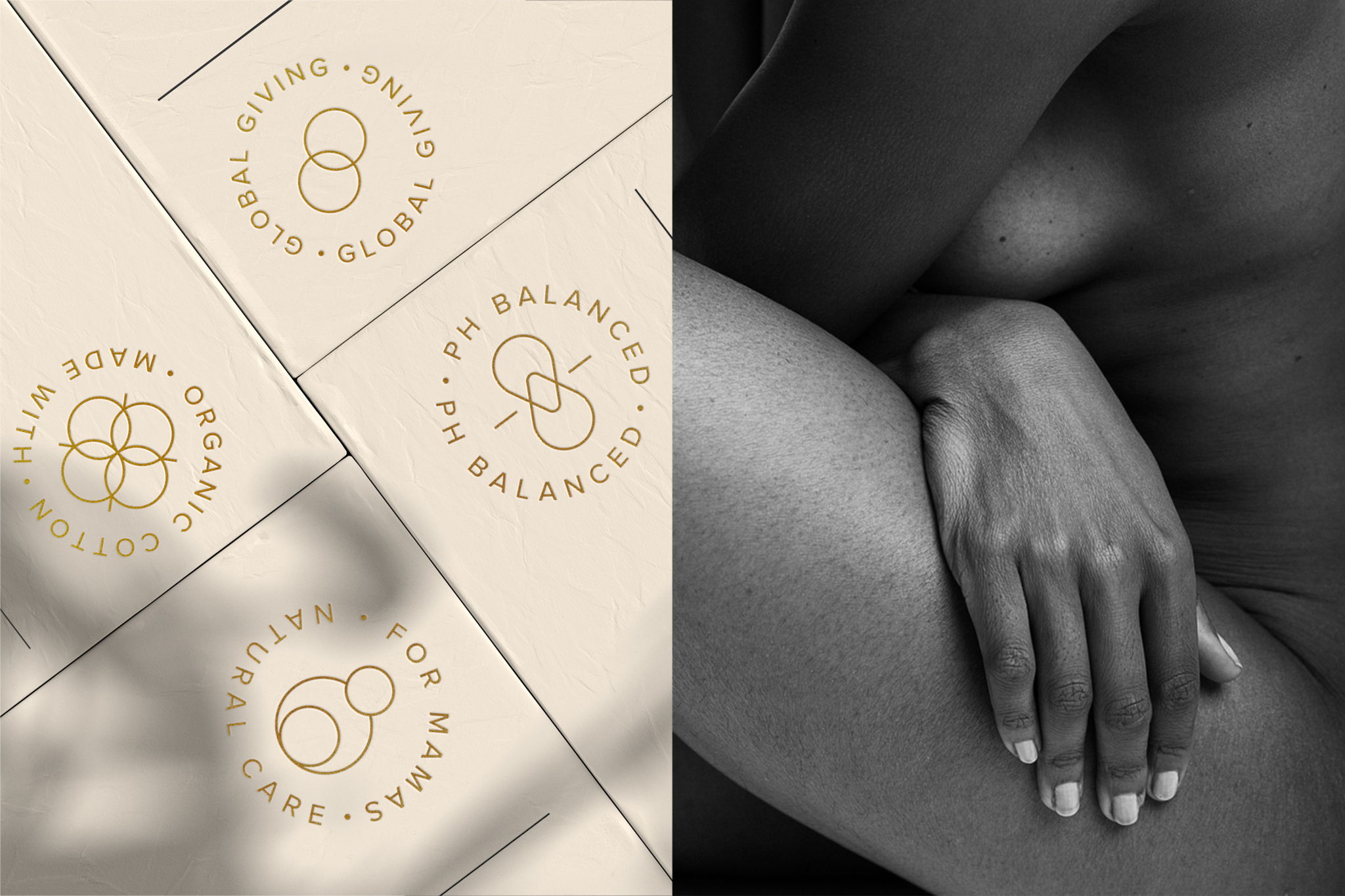 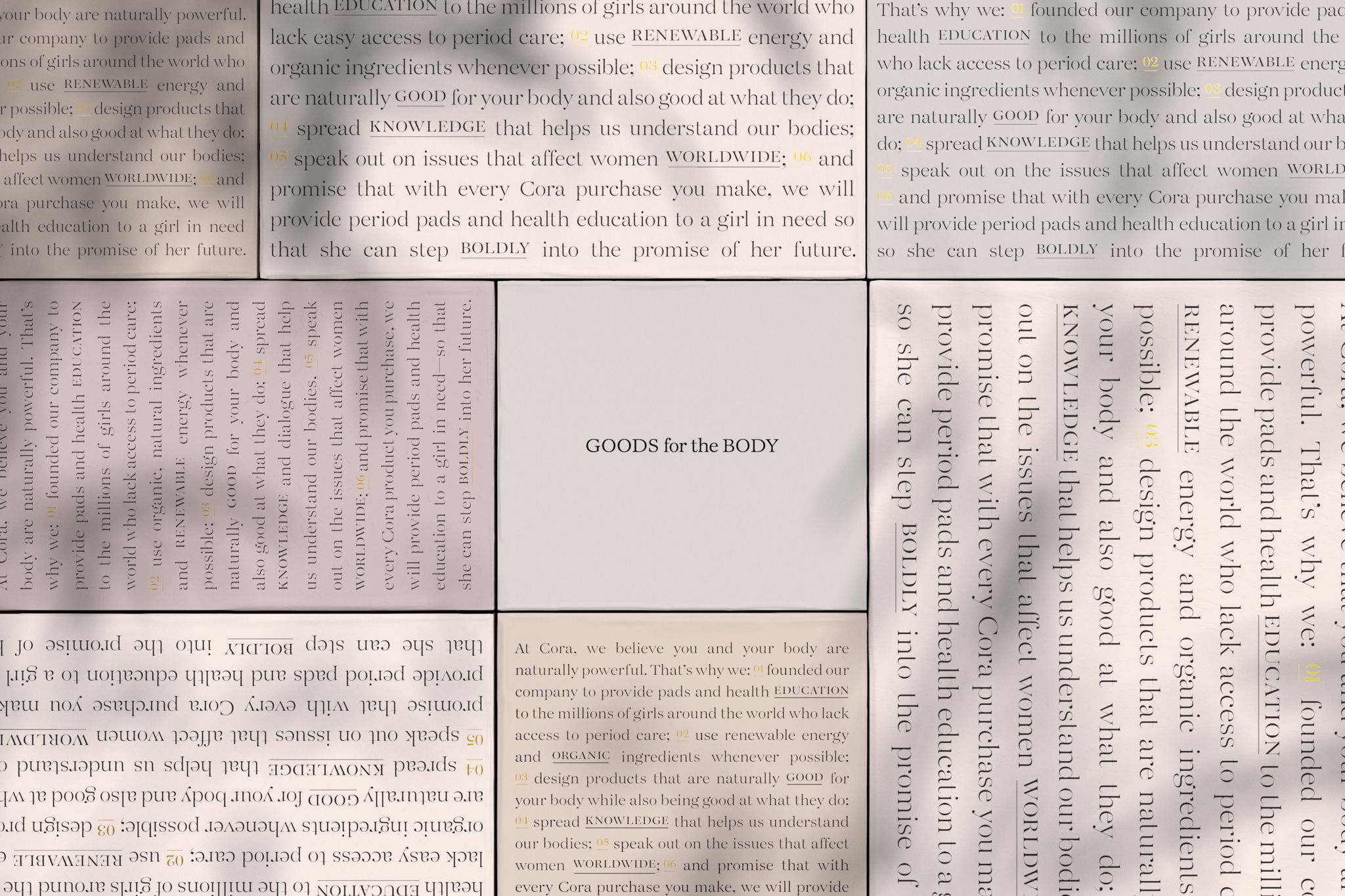