Retro meets sparkling water - Strangelove Drinks, designed by Marx Design. The color scheme on the branding and packaging is a nod to the late 80's where saturated computer game graphics were a big deal. These drinks will bring old time nostalgia to a simpler time where the start of tech was just beginning.

Melbourne-based Strangelove Drinks constantly challenge convention. They’re not afraid to flip things around and completely rewrite the script.  It’s not disruption for the sake of it, more a burning desire to rethink a product from the ground up.

Following on from the success of their Tonic and Soda ranges, Strangelove believed the sparkling water category required a shake up (something not usually recommended with sparkles…)

They engaged us to develop “Another drink by Stranglelove”, a range of sparkling water; zero sugar, zero calories, yet rich in flavour.  Destined for high end grocery, cafes and restaurants; generating intrigue and a strong shelf presense were key, all of course while retaining the Stranglelove challenger attitude.

Inspired by the seemingly simple letter/number combination ‘H2O’, we began exploring this fascinating and complex chemical concoction.  We dived deep into an analysis of mineral content, PH levels and other labcoat influenced layers of chemical makeup.

We extrapolated this graphic language further and jumped headfirst into 80’s computer game graphics. The imagery for the three product varients is formed out of multiple individual text characters coming together to form a cohesive whole. An image of a pear, apple and drop of water emerge out of the code, almost as a homage to how coding creates imagery in computer graphics.

Our exploration conjured up musty old periodic table charts from sixth form chemistry class; a timeless graphic icon which opened up opportunities to leap into new territory. We discovered a graphic parallel in ASCII code, which represents text characters in computers and other digital devices with a history dating right back to telegraph systems. The graphic language of chemistry was akin to computer progamming code and led us to investigate...

The variety inspirations like “10 Timeless combos” and “Aqua centric musical acts” offered opportunities to bring in Strangelove’s signature irreverent copywriting, which adds another layer to the pack communication.

The graphic potential of working with a limited set of characters also fitted perfectly with the design strategy we adopted for the Strangelove portfolio of products overall, one which constantly saw us “borrowing from the past and modernising for the future”. 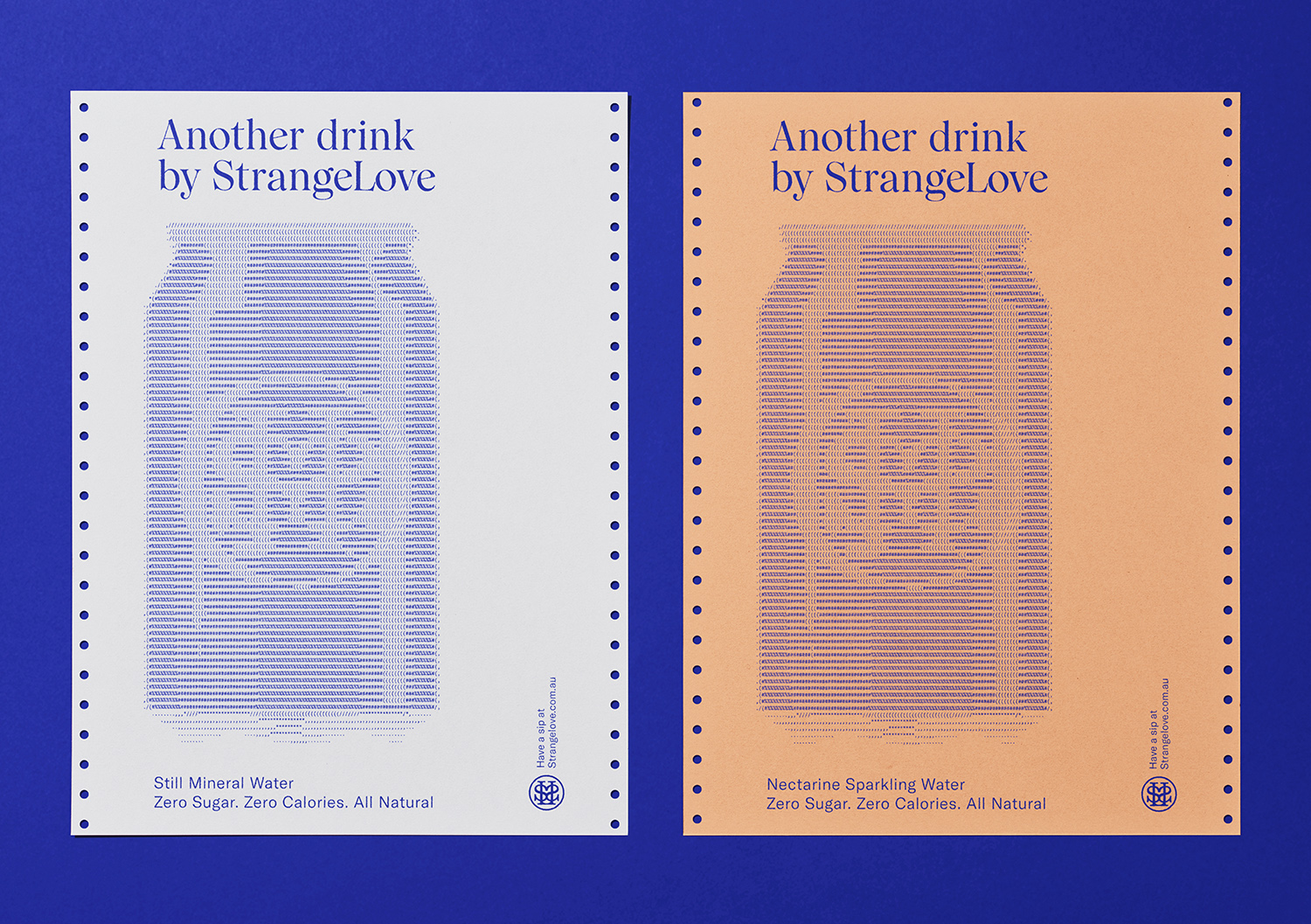 “Another drink by Strangelove” is centred around the idea of many individual properties coming together to form something fresh and exciting.  Slightly unassuming on the surface but with hidden depths waiting to be discovered as you draw closer. Just like the good old combination of one hydrogen and two oxygens.

This slightly old-school look adds in a playful pop-culture reference and offers the potential for hidden messages using the text characters.  We’d found a way to communicate a lot within a very minimal framework.

Colours took their cues from the flavour varieties, rich guava green and peach with the main font a deep blue which pops off the base colours perfectly.

The outcome is a product that brings an element of the unorthodox to a hugely popular but slightly staid category, yet still retains a high level of design sophistication.

Space Coyote Doesn't Run Away From Its Stoner Ethos