Jägermeister Bottle Gets A Metal Makeover To Honor Slayer

About four decades ago, a new form of music, with complex, fast and technical playing, paired with dark, occult and subversive lyrics, ever since fans have been hand banging to thrash metal bands since. Within the genre, “the big four” are bands seen as the bedrock of the style. One of those bands is Slayer—the others being Metallica, Anthrax and Megadeth, and they've melted your face since 1981.

Recently, Slayer announced their world farewell tour, giving thrash metal fans one last chance to see some of the founding fathers of that musical insanity. Jägermeister UK, in commemoration of the band’s long, storied career, and in celebration of their final appearance in the UK, has commissioned a limited-edition bottle and case. The 1.75L bottle sports a label in Slayer’s iconic album cover style designed by lifelong Slayer fans Mark Donington and Ricky Cheng. 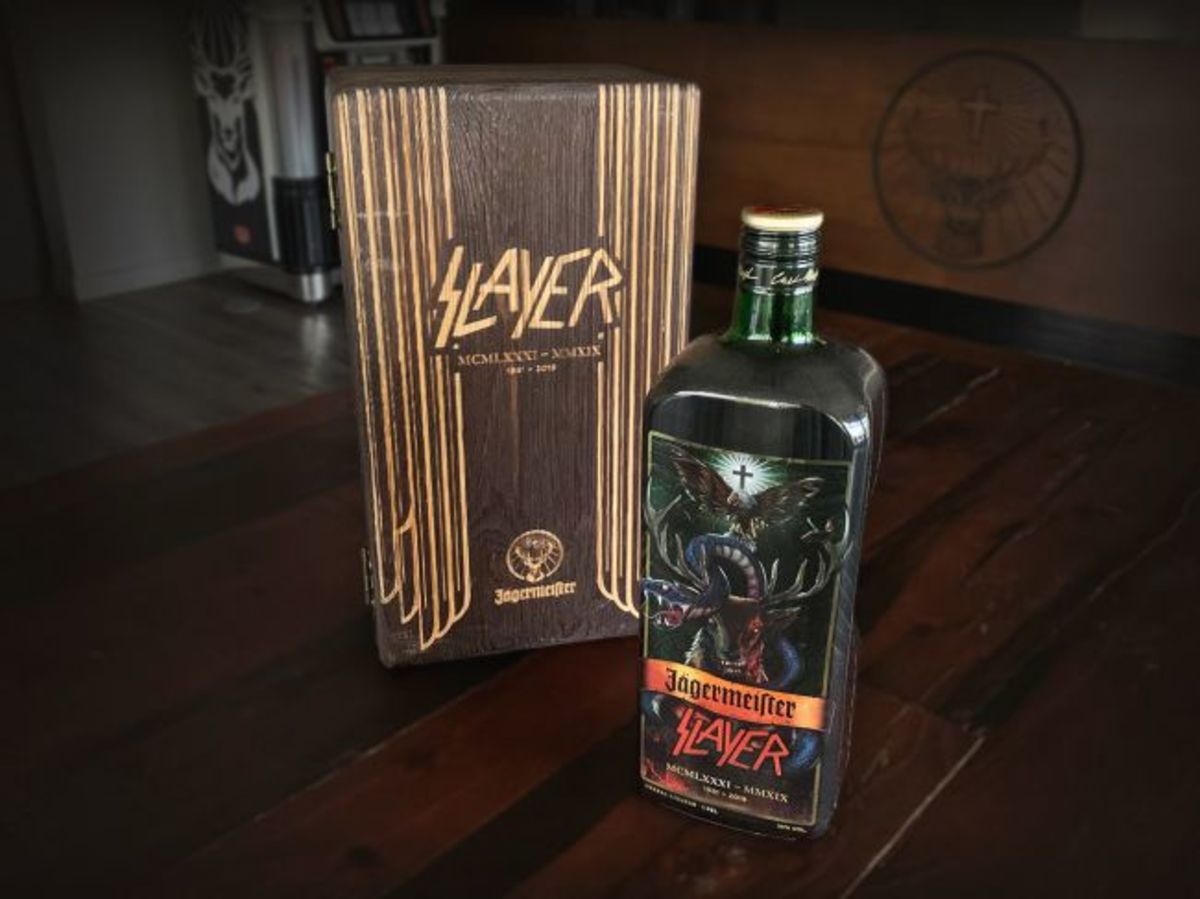 The label retains some of Jägermeister‘s signature elements but gives it the Slayer treatment by adding a snake and giving the buck a menacing grimace, while the addition of an eagle is a nod to the band’s logo. While the label’s design sidesteps some of the more controversial imagery found on Slayer album covers, it still respects the band’s unique visual aesthetic.

The bottle sits nestled in a custom, wooden-latched box. The inside comes inscribed with a note from the spirit brand thanking Slayer and their fans, and the outside of the box features the band’s logotype and their logo’s wings. Carved into the box, it's reminiscent of the handiwork THE KIDS™ sometimes etch into school desks and other pieces of furniture because defacing property never goes out of style.

“We have enjoyed a longstanding friendship with Slayer. They’re legends who have slayed the game for almost forty years. Releasing a special edition Slayer? bottle is our way of celebrating their legacy,” says Tom Carson, Music Manager at Ja?germeister UK.

The limited-edition bottle is limited to a run of 500 bottles and, sadly, is now unavailable, but you can still catch the band as they tour the world through late 2019, or pummel your eardrums with Reign In Blood once more.

The 7 Best Brands From The 2019 Summer Fancy Food Show