Whiskey, including Scotch Whisky, is a very particular, exacting spirit. A lot of different variables, including the craftspeople, can bring about unique and subtle qualities to the final liquor that goes into the bottle.

The craftsmanship that goes into producing quality scotch inspires the illustrations that serve as labels to the new Balvenie Stories collection of single malt scotch whiskeys. Balvenie set out to tell tales of character, endeavor, and craft by commissioning Here Design and UK print artist Andy Lovell to craft illustrations representing the real-life stories of the people behind the whiskeys, bringing meaning and emotion to the day-to-day grind at the distillery. 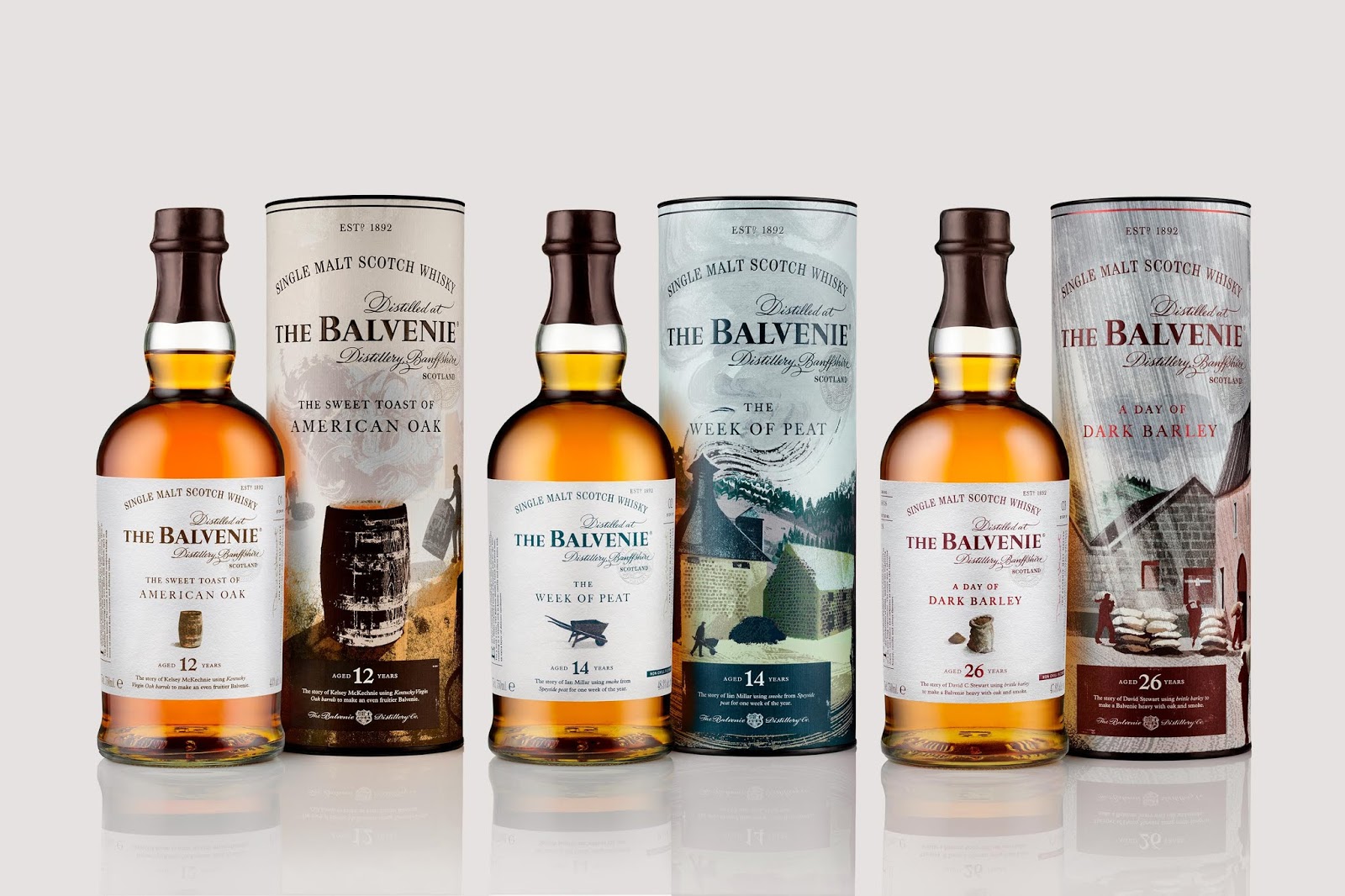 As part of the project, Lovell spent time at the Speyside distillery in Scotland, getting to know the craftspeople there, snapping pictures and sketching the locations significant to the narrative of each story. Inspired, Andy went to work capturing the distillery’s evocative atmosphere, using bold, gestural marks. The significance of the human touch is conveyed by the texture and tactility of Andy’s illustrations. 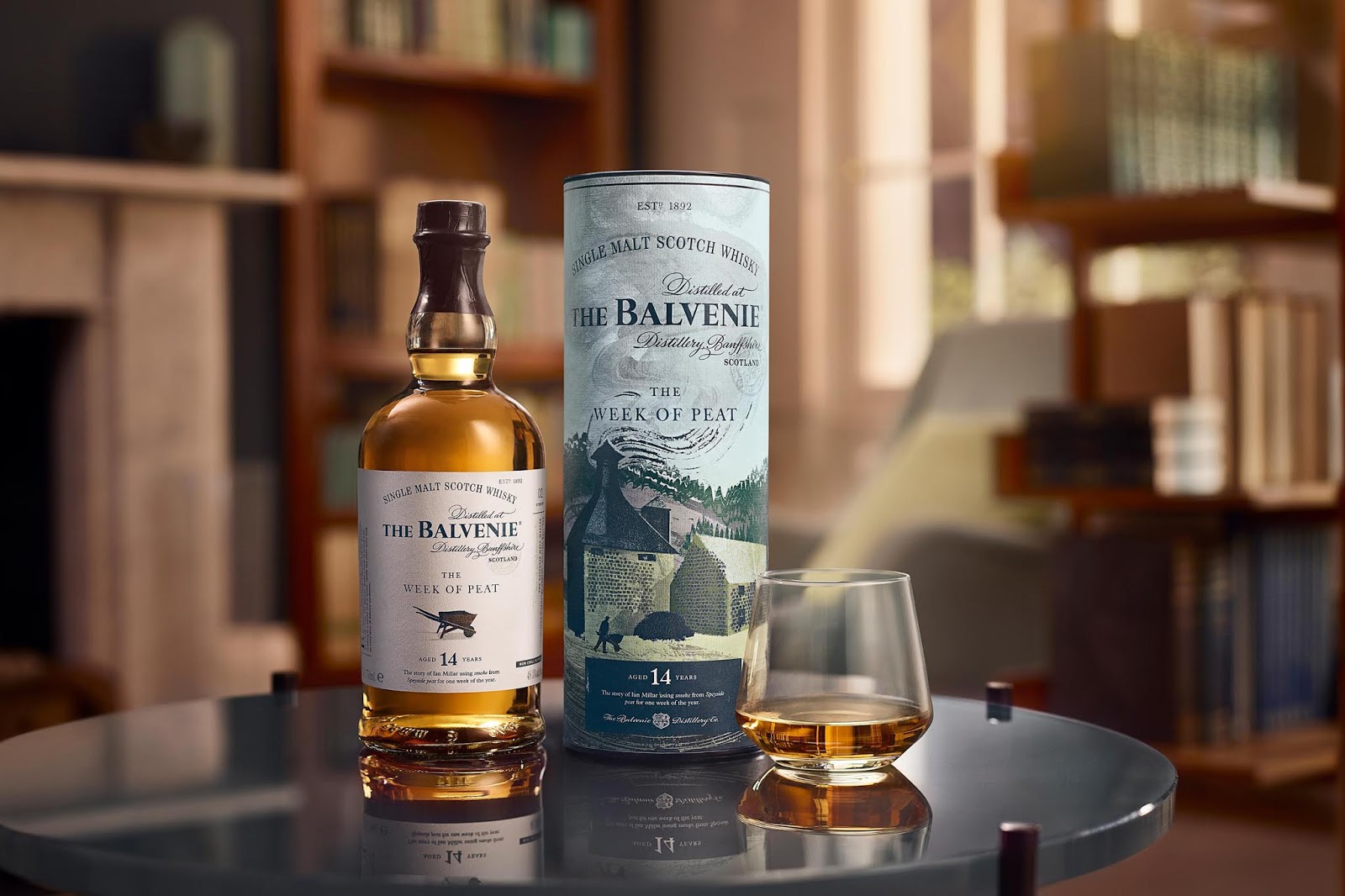 “Spending time at the distillery in Dufftown, watching the processes and meeting the people who are very much a part of the Balvenie family, gave me great insight into the world of whiskey and the narratives behind the Stories range. Witnessing the artisanal skills on display in the cooperage, seeing the maltings full of barley raked in perfect rows, like an art installation across its vast floor, inevitably informed my approach. I felt a responsibility to convey the layers of history, the atmosphere, and to evoke the spirit of the place so evident everywhere,” says Lovell. 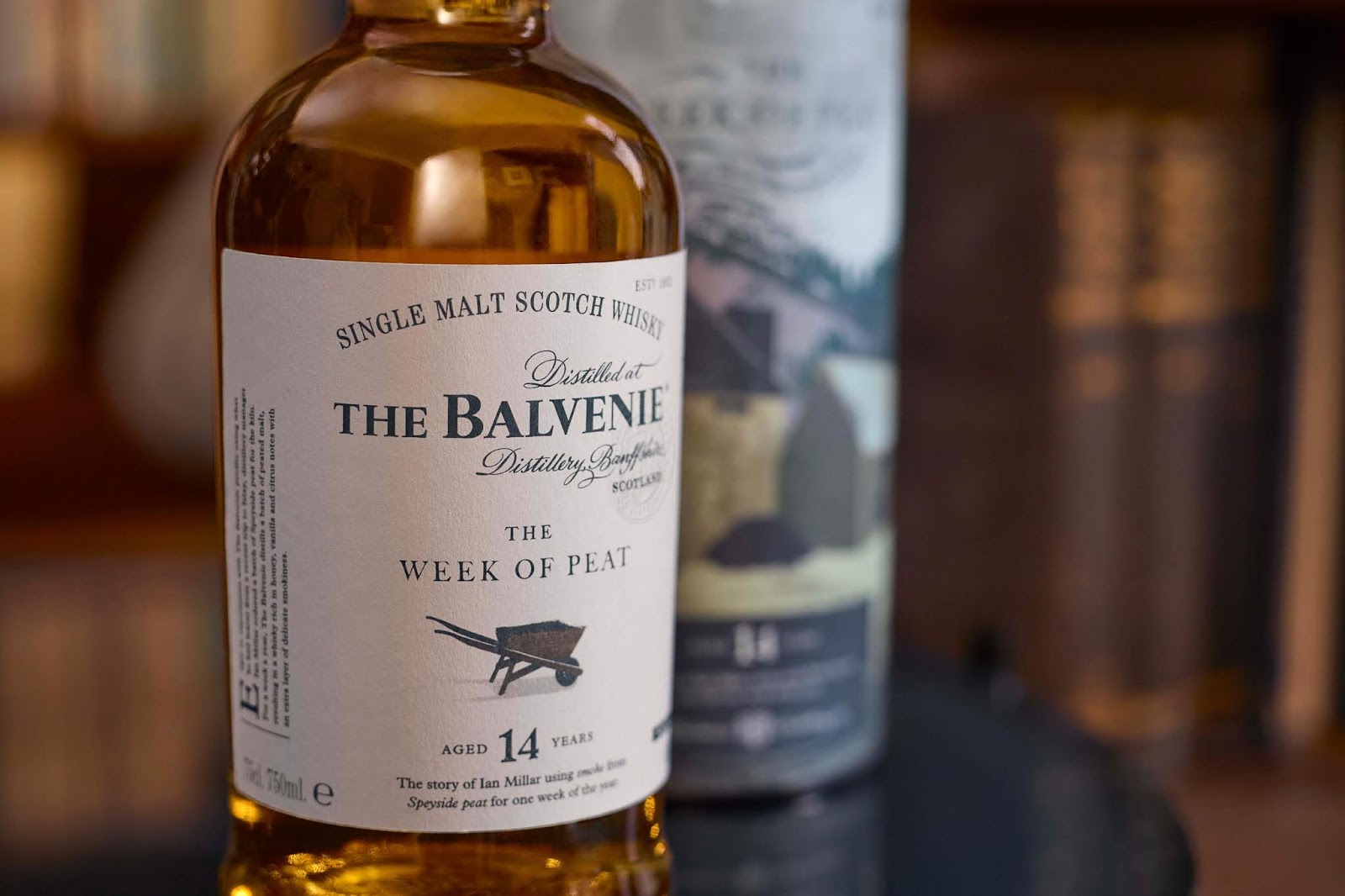 And while the illustrations that make up the labels tell the story visually, Balvenie makes use of modern technology to bring drinkers the story behind each whiskey in the form of podcasts. Each bottle has an NFC-enabled tag that can be used to download audio conversations between the craftspeople and Balvenie Global Brand Ambassador Gemma Paterson. 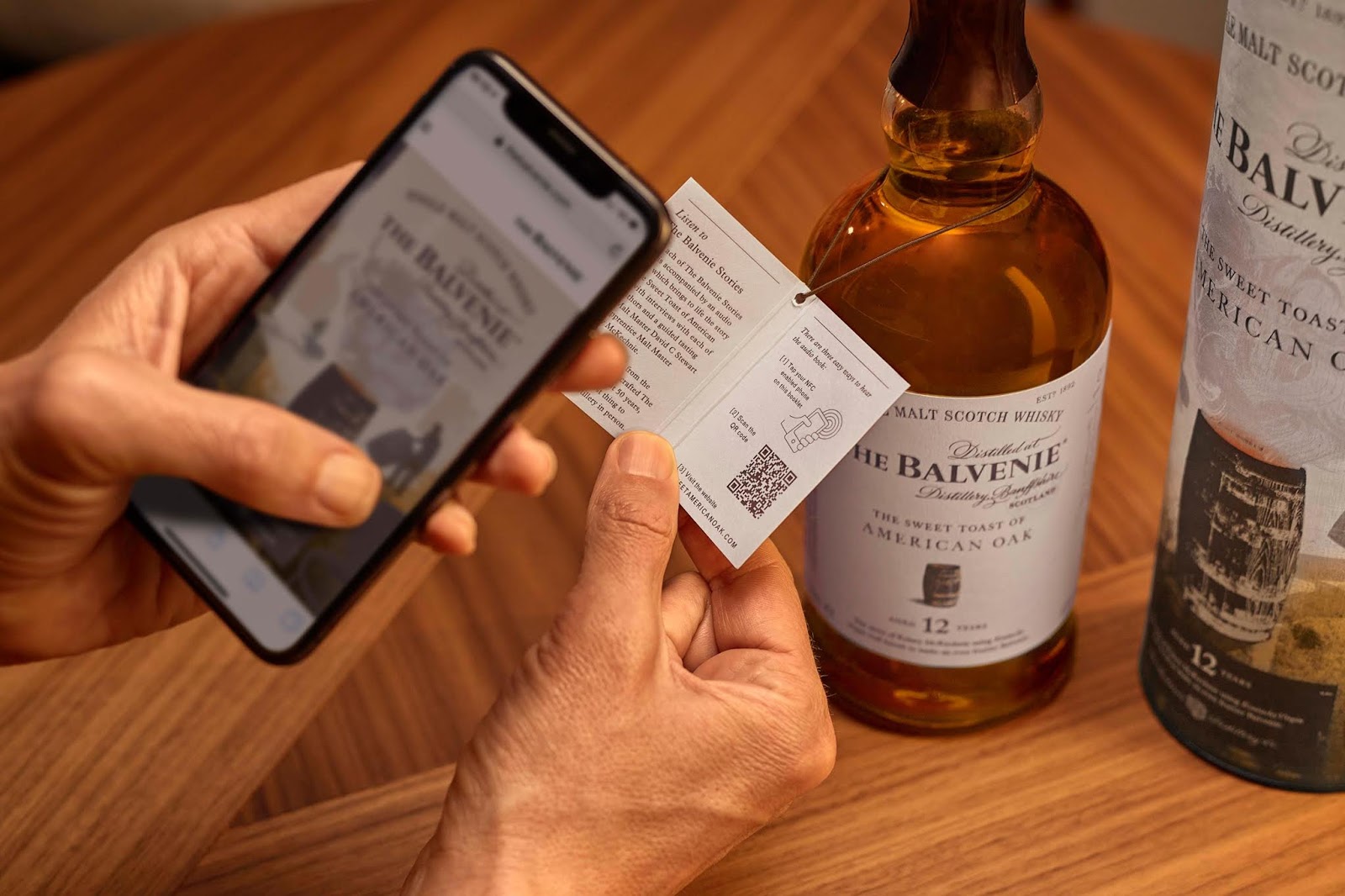 Accompanying the release of the new whiskey line is “Pursuit — The Balvenie Stories Collection,” a series of stories from acclaimed writers from around the globe, in collaboration with independent publisher Canongate.

“Our aspiration for the package and book design was to reflect the humanity of the makers at The Balvenie distillery and their story—and to reflect the fact that each whiskey was influenced and authored by a team of passionate distillery workers,” said Mark Paton, Creative Director from Here Design. “We wanted to ensure that the design was bold and Andy’s artwork was just that – handmade and expressive textures from his work, harking back to the physical craft of producing whiskey which brought the stories to life.” 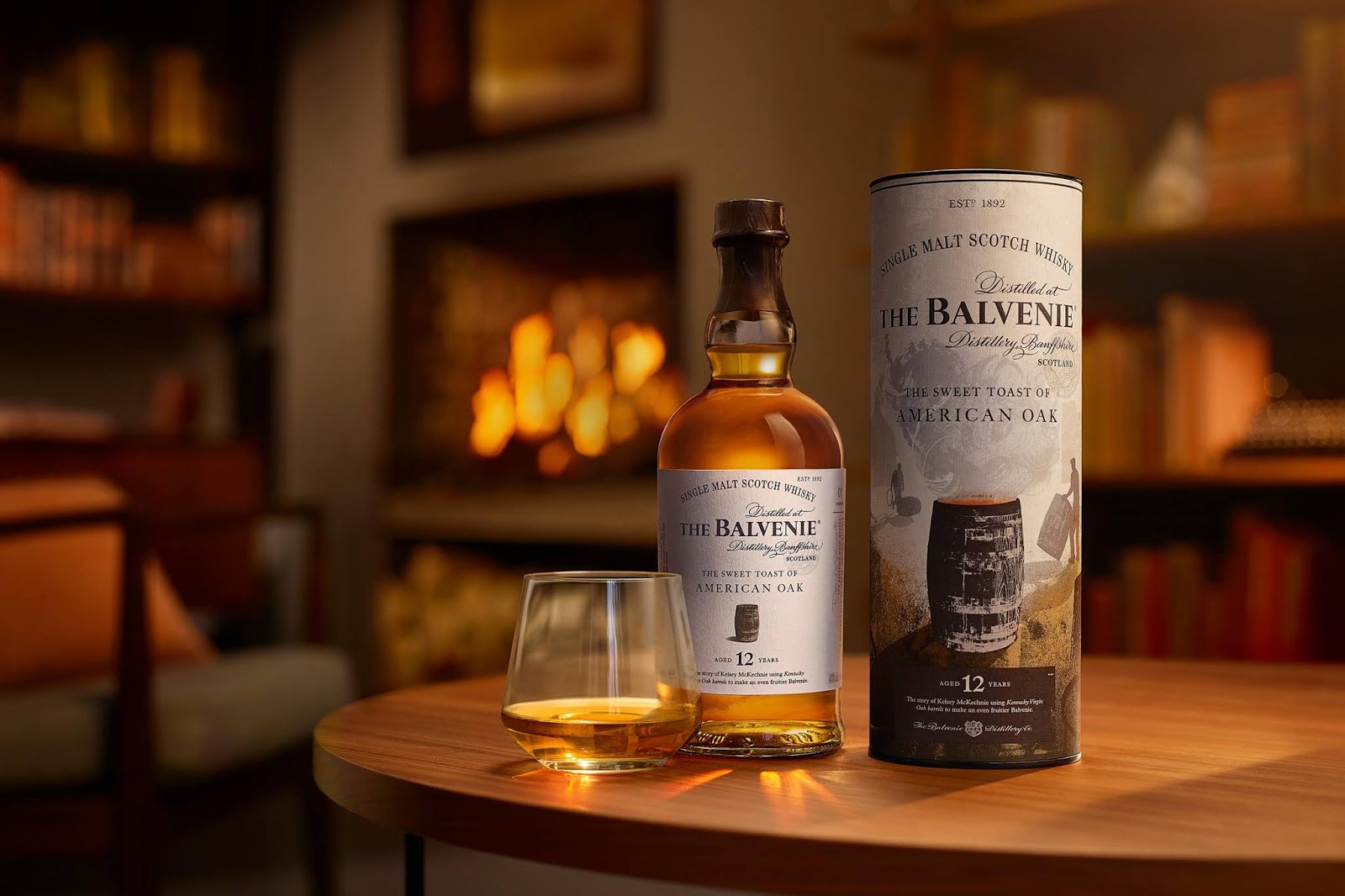 Although each scotch whiskey in the new line is a single malt, Balvenie, Here Design, and Andy Lovell combined different traditional and modern media to tell the tales of their new whiskeys and the craftspeople behind them.

The Balvenie Stories collection is available now and includes The Sweet Toast of American Oak, The Week Of Peat, and A Day of Dark Barley. 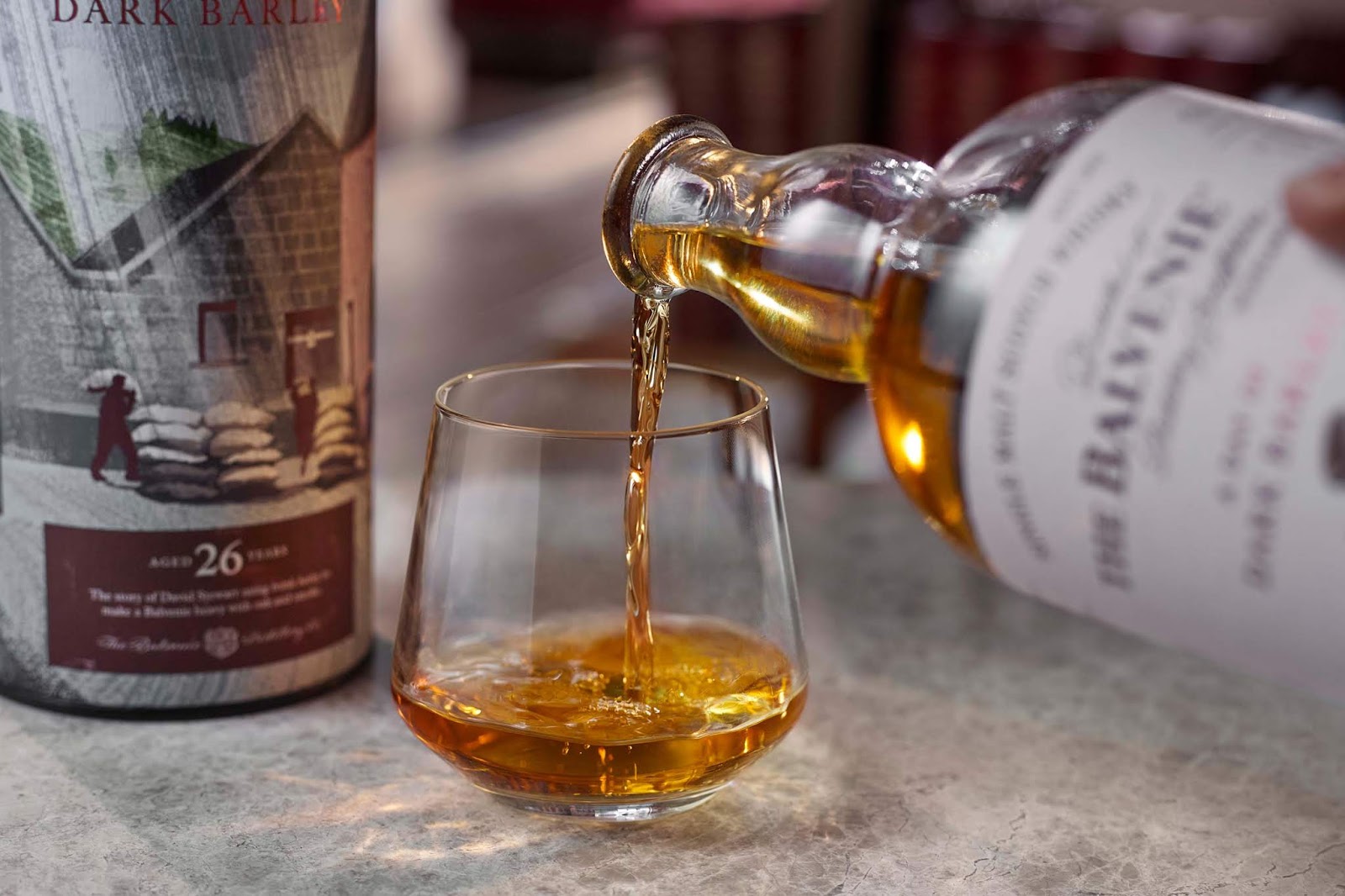 Dark Matter Is A Coffee Trip Back To the Late 60s