Ushering the dead from this world to the afterlife is a lot like developing the packaging for a brand.

But listening to Evan Faber, CEO of Moxie Sozo, talk about the process and research that goes into their work, you get that sense that they truly are bringing something to life. The brand identity and packaging for Baron Samedi Spiced Rum is no exception, and after immersing themselves in that Carribean Rum LIFE, they came away with a bottle stands apart from the rest of the players in the world of dark, spiced goodness.

We caught up with Evan to talk all things rum and voodoo so we could get to the bottom of their latest work on Baron Samedi and its intricate illustrations. 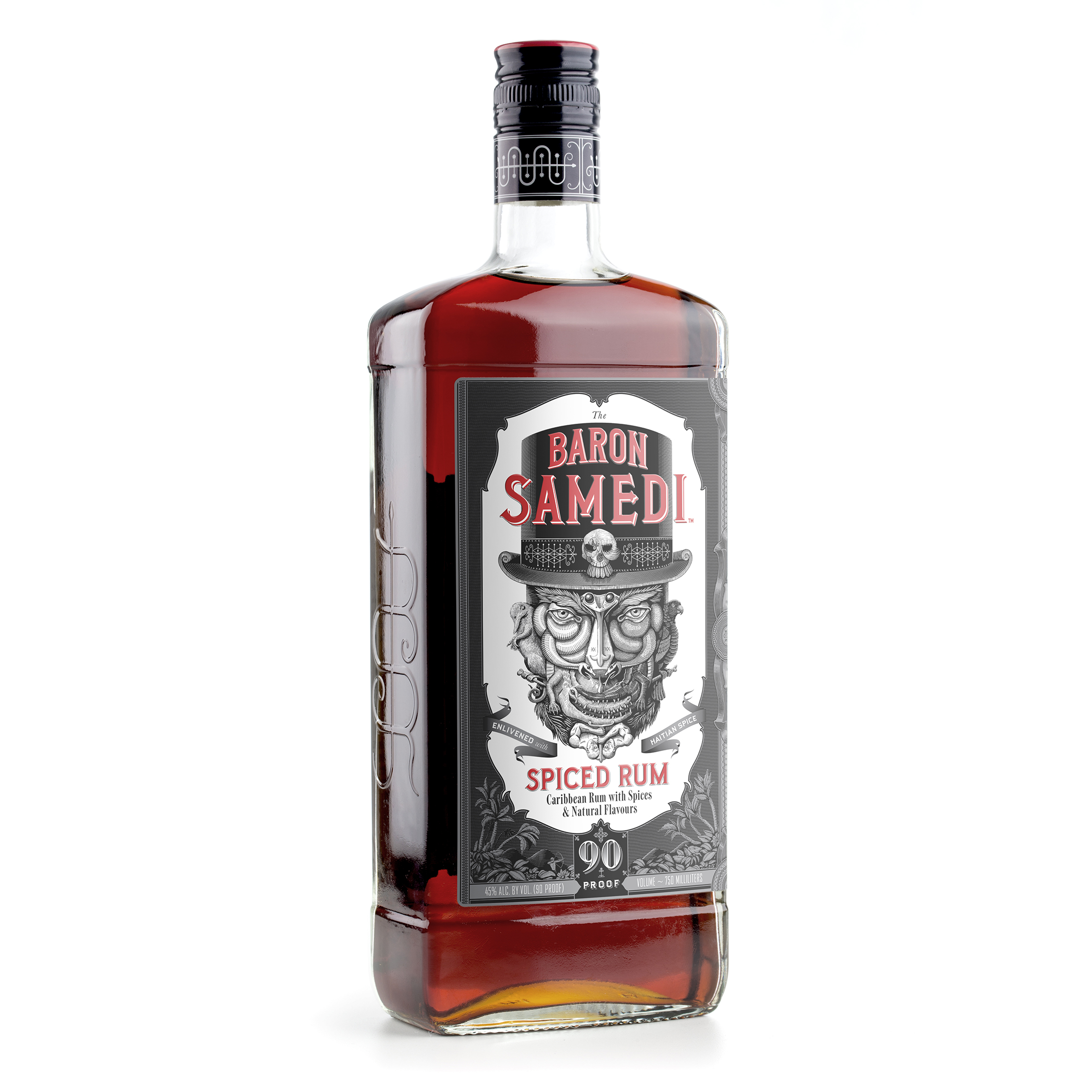 Walk us through the design process. How did you go from start to finish on this project?

Our design process for the Baron Samedi Spiced Rum began with a visit to the Caribbean, where we immersed ourselves in the history and culture of rum and the region. Following our visit, Moxie Sozo developed ten distinct brand concepts—inspired by our visit and informed by hours of additional research—each with a brand name, story, and mood board.

Of the ten conceptual directions we presented, our client chose to focus on four. Moxie Sozo developed 18 distinct visual packaging concepts and bottle forms from those four stories. Two were selected for further exploration, a process which yielded 15 new visual directions and bottle form evolutions. Of those 15, three were chosen to move forward.

Along the way, we held an all-day bottle form workshop that brought together key stakeholders, professional bartenders, packaging engineers, and others to inspire and ensure that the bottle we designed would not only be distinct, approachable, and at home in the world of Baron Samedi, but that it would also be structurally and functionally sound.

We adapted the three leading label designs to a handful of favorite bottle forms, and what you find on the shelf today was the concept selected from that process. 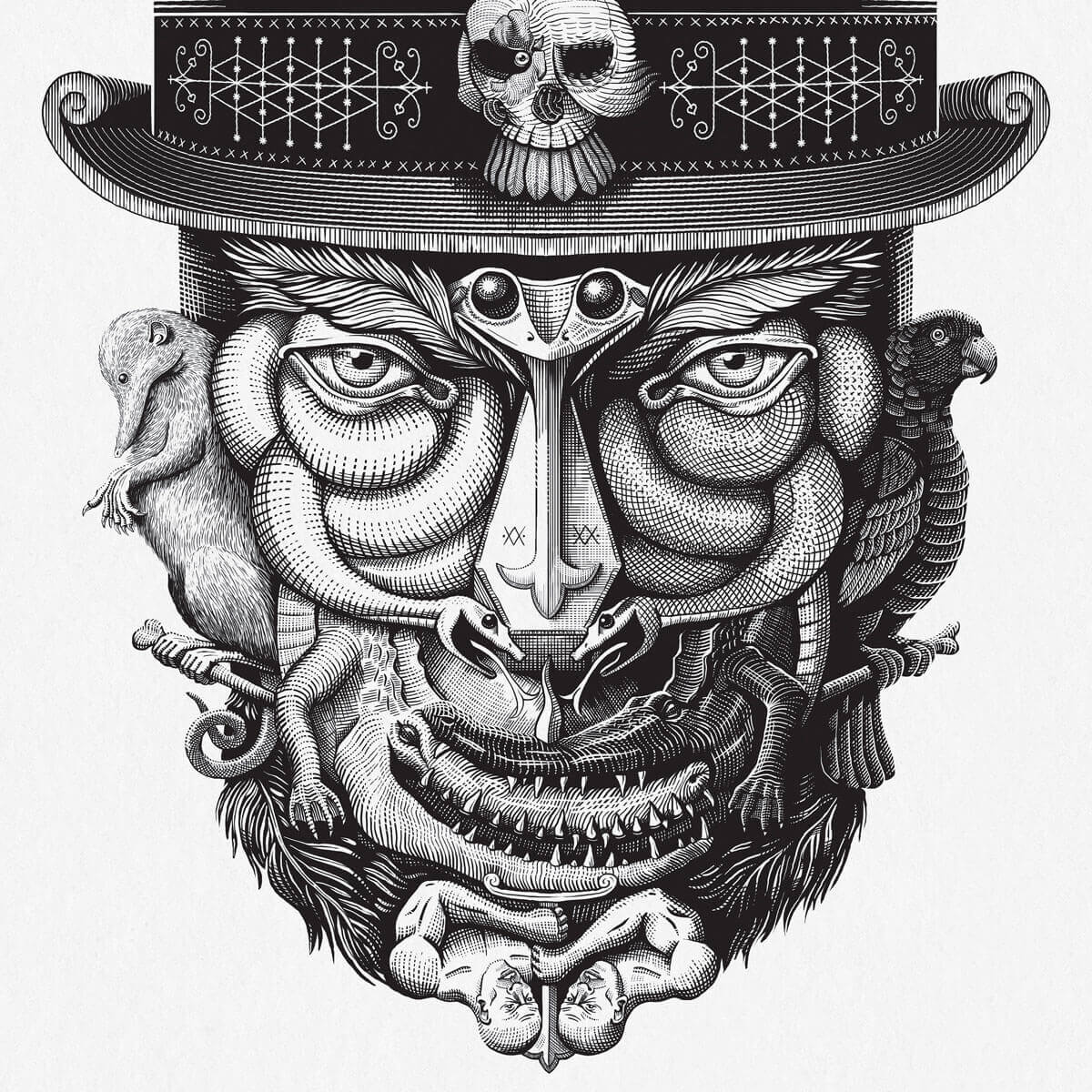 Baron Samedi is one of the loa of Haitian Vodou, how does he serve as the main point of inspiration for this bottle of Spiced Rum as well as the name?

The Baron Samedi Spiced Rum is a well-crafted, supernatural spirit. The inspiration comes from the 18th-century tale of Baron Samedi, the enchantingly dark Haitian voodoo spirit who lives between worlds, ushering the dead from our world into the afterlife. He is known for his beguiling charm, outrageous behavior, and—like the liquid that bears his name—for guiding souls to an excitingly unexpected world. It helps that he’s said to have a taste for rum, too. 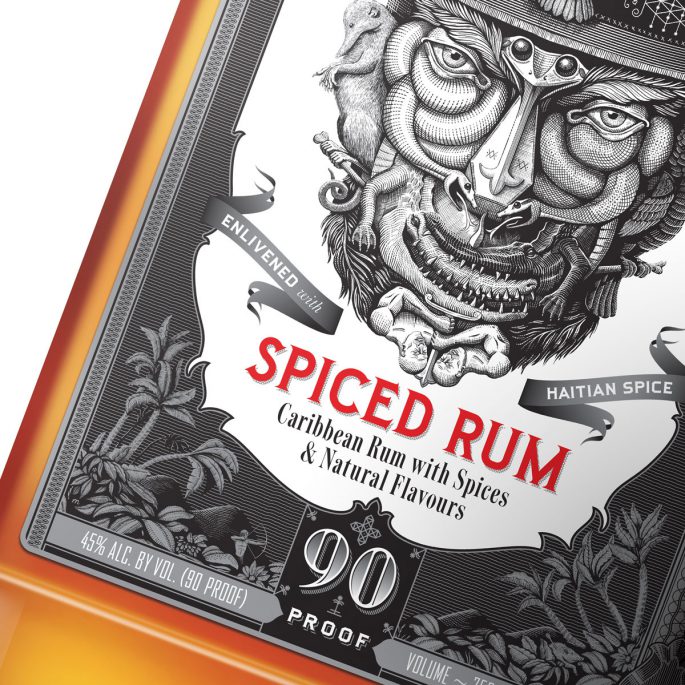 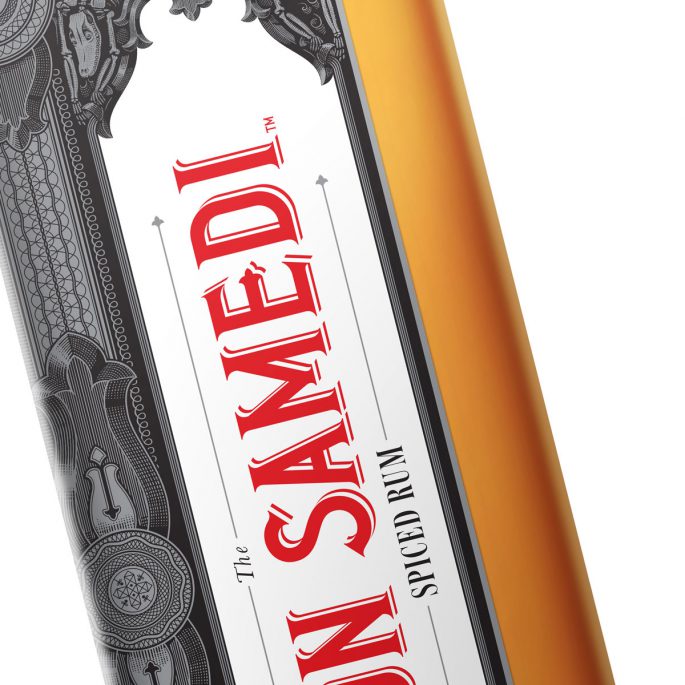 Where is the rum distilled, and what makes this bottle of rum unique?

The liquid is sourced from the Caribbean Islands and possesses a deep, amber color and intoxicating flavor with notes of nutmeg and hazelnut. The Baron Samedi Spiced Rum is different from other spiced rums thanks to the addition of vetiver, a grass native to Haiti that lends a woody, earthy flavor, and the inclusion of Jamaican pot still rum, which gives it a robust taste and smooth finish. 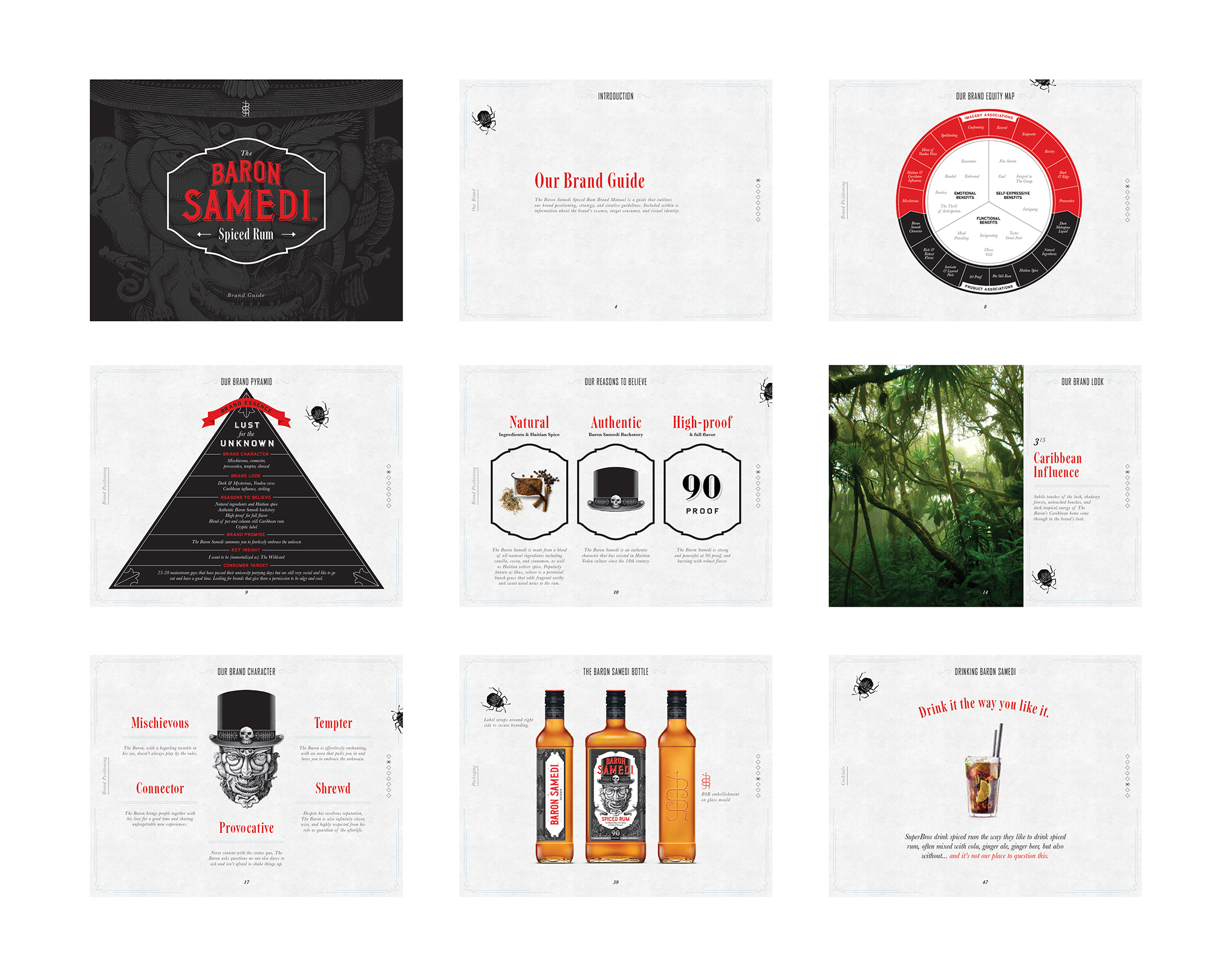 What was one of the biggest goals you set out to achieve, and how did you accomplish it?

Launching a new brand in an aisle as crowded as spirits requires knowing when to speak the visual language of a category and when to break it. From its name and label design to its bottle form and price point, the Baron Samedi Spiced Rum had to both feel at home and stand out against a sea of other mid-market options. The tale of Baron Samedi laid the groundwork for a compelling and ownable brand story alongside category players like Kraken and Sailor Jerry, and the intricate and captivating packaging brings that story to life. 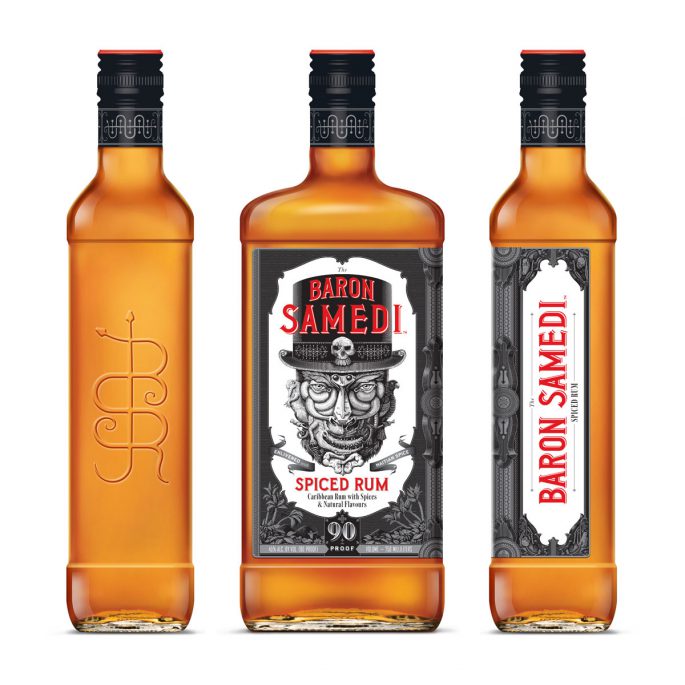 There are 13 unique hand-illustrated elements used in the portrait of Baron Samedi. What is the significance of the details chosen? Why do an opossum and a parrot make up the ears, while snakes form the cheeks?

There are 13 faces hidden in the Baron Samedi Spiced Rum label, made up of 11 creatures and symbols found throughout Haitian landscape and lore. A solenodon and Hispaniolan parakeet make up the Baron’s ears. The snakes and frog that make up his cheeks and brow, too, are rare breeds specific to the area. His mouth is made up of two caimans, and the two men who make up his chin thrust their swords through his mouth, a dark nod to his sharp wit. His nose is a coffin, representing his role in the underworld, and the skull emblazoned on his hat is a rooster, a common fixture in voodoo ceremonies and culture.

Were the illustrations hand-drawn and then uploaded for final touches, or were they all done digitally?

The initial visual exploration was done by hand, but we created all of the elements that appear on the final label digitally. 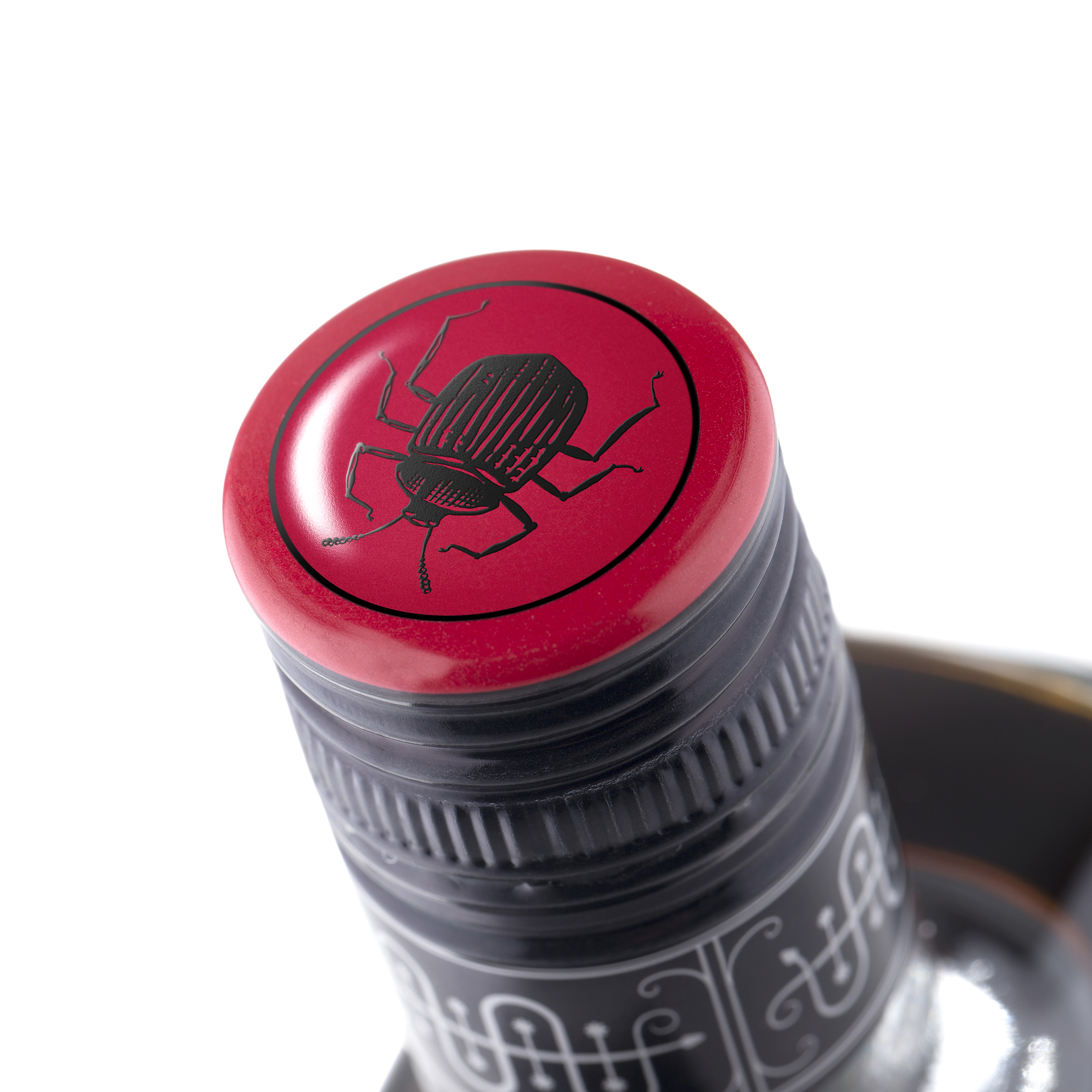 Additionally, why did you opt for blackwork illustrations throughout the entirety of the design instead of including color?

This particular direction was inspired by a 16th-century etching we came across during our research. We explored a broad range of concepts, using a full range of rendering styles—including full-color options—but for this concept, the mysterious content and dark subject matter lent itself to a more serious, monochromatic execution.

Lastly, what’s the symbol raised on the side of the bottle stand for, and why did you choose this specific placement?

The BSR (Baron Samedi Rum) monogram on the bottle’s waist is loosely reminiscent of a veve, a type of religious symbol used in several branches of voodoo, including Haitian. Its placement has no symbolic meaning, but it does help to provide balance to the design, whose label wraps around the bottle’s other side. 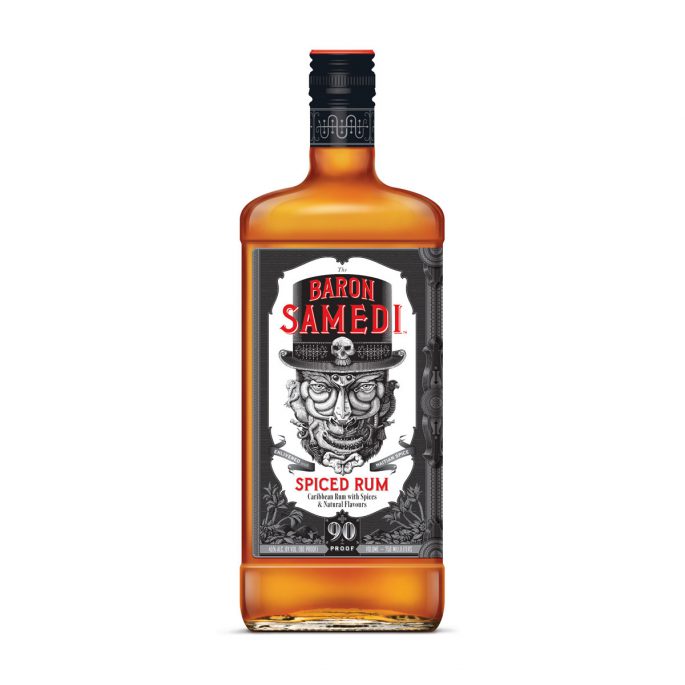