There exists a timeline where bowling shirts, goatees, pooka shells, spiky hair and Gatorz shades are the pinnacle of cool. There would be old dudes still talking about carnal conquests of decades-past in a parlance that only teenage boys would find impressive. These cool guys would fuel their non-stop romp with shots of tequila and Donkey Sauce.

Celebrity chef Guy Fieri and his musical analogy Sammy Hagar have teamed up to bring a taste of that Flavortown life to dads everywhere with a new line of Tequila called Santo Fino Blanco; it's a 100% blue agave spirit, created in collaboration with 3rd generation master distiller at El Viejito, Juan Eduardo Nuñez. 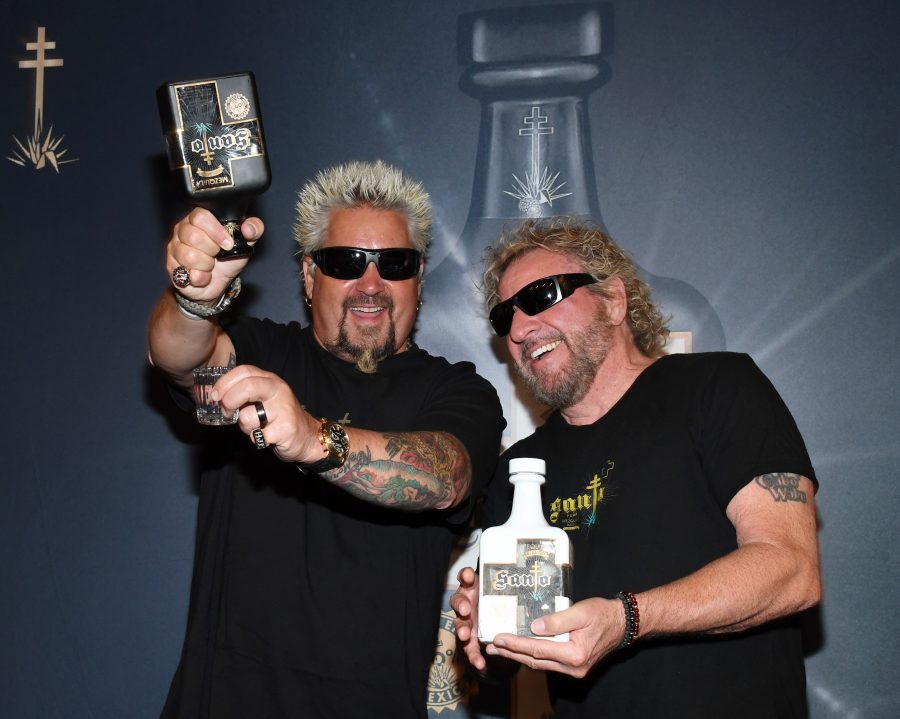 Hagar is no stranger to Tequila, having founded Cabo Wabo Tequila in 1996, which he then sold a controlling interest to Campari Group in 2010 for $80 million. Nuñez and Hagar have worked together on Cabo Wabo and Santo Puro “Mezquila,” a spirit described as the “world’s first Tequila-mezcal hybrid.” Hagar also is the founder of Sammy’s Beach Bar Rum and Sammy’s Beach Bar & Grill chain of restaurants.

Besides being confused with the frontman of Smashmouth, Guy Fieri is primarily known for his many Food Network shows and a portfolio of over 70 restaurants. He is also a friend of Hagar, and approached the red-headed rocker about a creating a Tequila together, which Hagar described as “perfect timing.”

Santo’s bottle is imbued with the spirit of its creators and not only is there a cross-shaped label, but the brand's logo also features a Lorraine Cross sitting atop an agave plant.

The logo features a Gothic-style font, and overall it looks like some gringos wanted the bottle to “look kinda Mexican.” Santo’s previous liquor, Puro “Mezquila,” was a collaboration with Maroon 5’s Adam Levine, and based on what we saw during the Super Bowl halftime show, Santo’s labels would not look out of place inked on his chest.