Kids love to do dangerous shit and post it on social media. From the ghost pepper challenge, eating spoonfuls of cinnamon, tide pods, or the Bird Box challenge, low-rent stunts captured on smartphones and then uploaded to the internet seem to go hand-in-glove. The latest craze, the “shell on challenge” supposedly has teens goading each other into eating foods rind on, or more dangerously, foods still in plastic wrapping.

The trend appears to be relatively new, although internet fad historians Know Your Meme trace the origin to a YouTube video from February of 2017, with YouTuber YonngMo2k15 attempting to eat an egg with the shell on. On April 15th, 2019, another YouTuber posted a similar video, and from there it spread elsewhere to other social media platforms, but most importantly, your Mom's Facebook feed. 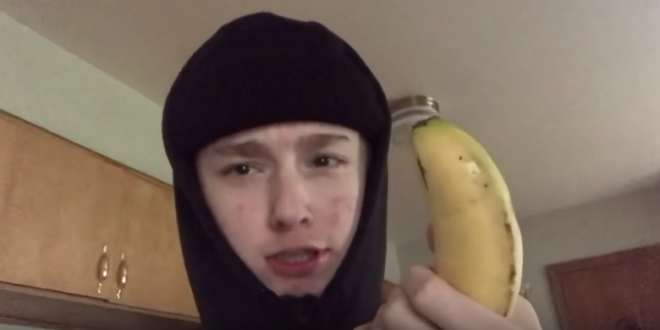 While local news outlets, Fox News, and the Today Show are “warning parents” and raising the alarm for odd and mildly dangerous teen behavior, other news sites question whether the “shell on challenge” is even a legitimate trend. The Daily Dot's Elish O’Sullivan went searching out for instances of the “shell on challenge” and found only two results when searching Instagram, asking if it’s much ado about nothing, as with the Tide Pod challenge.

Whether or not it’s a social media fad now or will become one soon, eating produce rinds or plastic can, at a minimum, produce a choking hazard. Furthermore, plastics such as BPA and PVC are thought to have a long-term impact on health, adverse effects on fetuses and even cancer.

While the “shell on challenge” may just be the latest “these-crazy-kids-these-days-thing," is chewing on a banana peel all that different than rolling a joint made from the white stuff on the inside of banana peels in order to get high? The difference perhaps is that those kids weren’t uploading videos to non-existent social media channels, nor was there and a media or content machine needing constant feeding.

But, if you insist upon eating food packaging, try these alternatives out.

Making Sustainability Tangible: From Ownership And Purchase to Access And Participation

Why Packaging Designers Should Visit A Recycling Facility