Traditionally, well-off colonists and aspiring imperial powers sought far off lands to extract resources. From Africa, Asia, and the Americas, Western powers set sail to faraway lands in search of riches in exotic lands. European consumers demanded items such as silk, porcelain and spices from Asia. Some of the same countries now seek to use these same locales for a different purpose—to off-load the by-products of modern living, mainly plastics, to a distant, exotic place, sight unseen.

This new way of exploiting lesser-off countries is a different, but just as harmful form of colonialism. Developing countries such as China and India however, have decided that they don’t want other countries’ garbage, not only creating a recycling crisis but ultimately showing that the best solution to the plastic endemic is not using the material in the first place.

For most consumers, recycling ends with tossing recyclable material into a designated bin and then it becomes someone else’s job to process the material and convert it into something usable. While there is some consumer education focused on encouraging recycling, there still remains a large number of consumers that have little to no idea of how their recyclable waste is processed and turned into raw material. It’s an easy way to feel like you're creating a greener world, but most consumers are unaware that it’s possible the items they intend to recycle instead get landfilled because sorting facilities aren't set up to process certain items, or because there’s no buyer for the actual material.

Following a similar trend observed in manufacturing, lower labor costs pushed recyclers to ship unsorted recycled material to countries like China, to maintain profitability. While offloading the burden of processing recycled plastic overseas was expedient and profitable, someone had to face the brunt of the environmental and health impacts of this waste, and in many cases that meant Chinese laborers working in small, family-run factories.

Director Wang Jiuliang’s documentary film “Plastic China" illustrates the conditions in these small factories. The film was screened at Sundance and briefly became a viral hit before being wiped off the Chinese internet. While the government censoring a bleak depiction of Chinese life is perhaps unsurprising, what China did next came as a shock for many, with global repercussions.

In February of 2017, about a month after “Plastic China” went viral in the country, China announced their National Sword policy, effectively banning many of the recyclables countries like the US were sending with reckless abandon. Additionally, China has announced its intent to ban all recyclable imports as soon as 2020. China’s tightening on trash imports is part of an overall effort to fight pollution. President Xi Jinping has “declared war on pollution,” after years of prioritizing economic development over environmental conservation as a fifth of Chinese farmland and 60% of groundwater are polluted.

The upheaval in the recycling market is difficult to understate. Prior to China’s crackdown, the country consumed over half the world’s recycled plastic. Municipalities across the United States have seen their recycling revenue take a nosedive, cities have ceased collecting certain kinds of plastics, and in some cases, landfilling recycled material that no one wants to buy. To meet the impurity guidelines, recycling companies will have to make unanticipated, expensive upgrades. CalRecycle, the California department overseeing recycling, estimates that China’s policies would require up to $3 billion in investments to infrastructure to meet the state’s recycling goals. 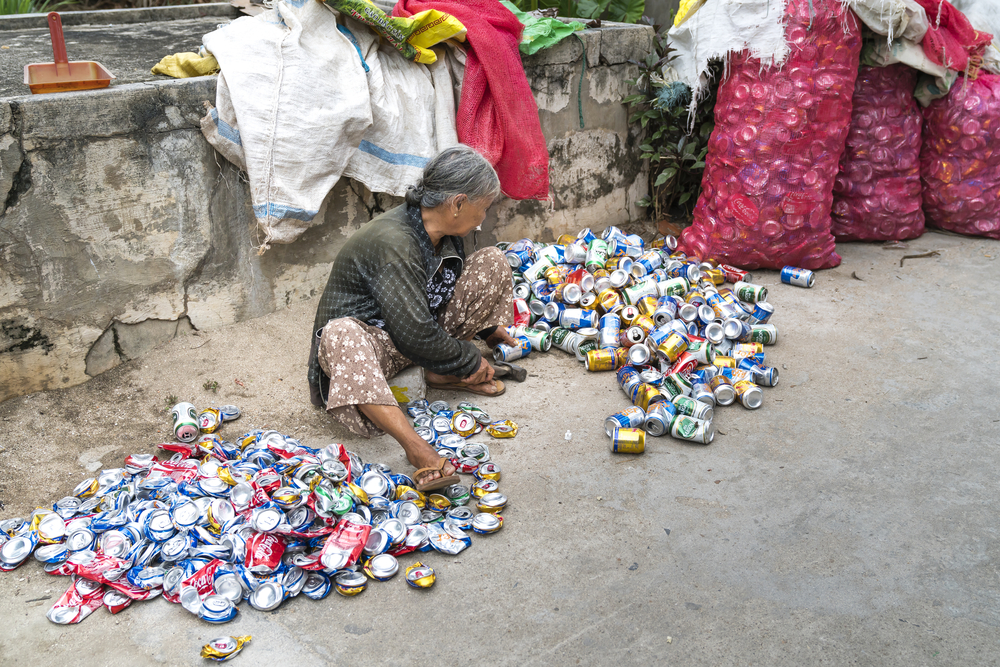 With China deciding they no longer want to be the world’s dumpster and improvements to recycling facilities still catching up, some recyclers have turned to other markets in Asia and India to offload the recyclable material China now refuses.

Vietnam was overwhelmed with plastic imports and, as a result, stopped accepting recycled plastic. Similarly inundated with materials and with an inadequate domestic collection system, Thailand will no longer allow imports of plastic scrap by 2021. And India, which had emerged as one of the biggest importers of scrap in the wake of China’s regulations, also announced a ban on the importation of recycled plastics.

These countries are following China’s lead and by doing so, forcing the world to rely less on dumping trash on another country and not only process their own scrap, but reduce the amount of plastic used. Some of these countries were just overwhelmed by the supply of recyclable material looking for buyers, and according to an analysis by Greenpeace, Thailand found a 1,985% increase in imports while Malaysia saw a 245% increase.

For now, some recyclers are stockpiling material until they can make a profit while others have obtained waivers allowing them to send unsellable material to landfills.

The World Economic Forum estimates that at the current rate there will be more plastic in the ocean than fish by 2050, and that was before sweeping bans against imported recycled plastic. If aggressively seeking solutions to the global plastic crisis was already a priority, the urgency has only accelerated now that consumers can no longer depend on recycling.

By making meaningful reductions to the overall amount of plastic we use, we can decrease the burden on recycling facilities, particularly when it comes to lesser-valued materials like flexible packaging. Conventional colonialism led to some horrendous outcomes such as famine, war and plague, and this breed of toxic colonialism could lead to the same, as plastic pollution continues to ruin the environment.