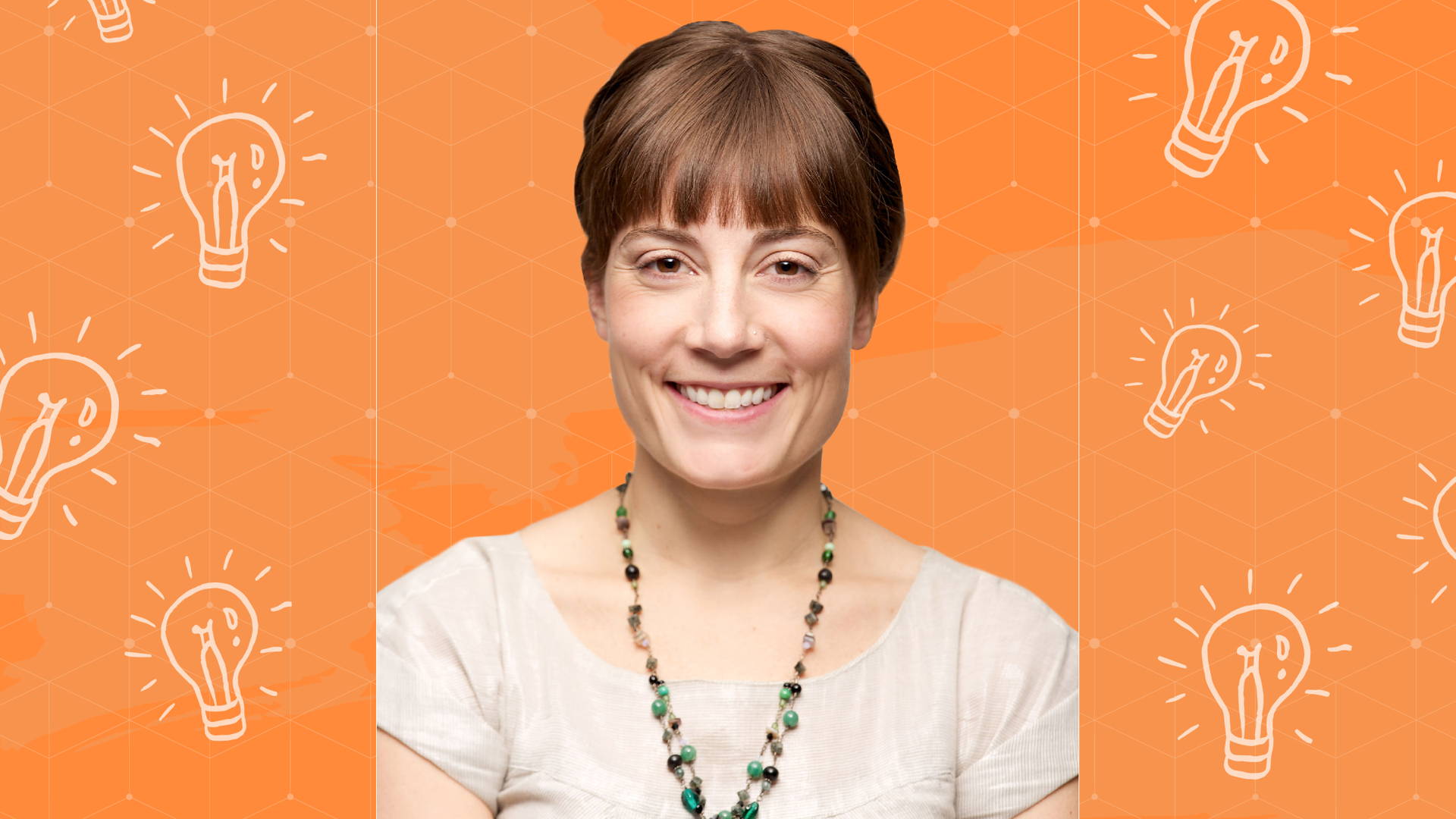 “A lot of our industry tries to separate or segregate and put us in boxes,” explained Elizabeth Talerman, CEO of Nucleus. “‘That person is a designer, that person is a strategist, that person is a writer.’ But the wonderful thing about Gena is she is all of those things.”That’s quite high praise to receive from someone who used to be your professor, isn’t it? It’s no wonder Elizabeth later went on to have Gena as her teaching assistant, a freelancer for her agency, and as of this year, her business partner.

Gena Cuba, design strategist and Partner at Nucleus, began her career with the passions many young designers have starting out—typefaces, color palettes, and all the elements of what’s explained visually. After graduating from the University of Wisconsin, Milwaukee, and working at an agency for a while, she made the switch into financial services.“At the agency, I was used to colleagues who all shared my language,” Gena said. “And then I had to walk into meeting rooms and put my designs in front of people who had no idea how to react to it, and I had to try and explain to them why this was right.”She mentioned that a designer often has an intuition when it comes to their work—but brands and businesses don’t hire people for their sharp gut instincts. And this is where strategy comes in.“It’s not just about visual execution,” mentioned Gena. “It’s about saying, ‘This is where you’re trying to take your business, or this is your vision for how this needs to develop, so this is how we should execute these different pieces and go forward.’”

Wanting to expand on her skill set and dive deeper into design strategy, Gena began considering graduate school options. SVA was a standout. “I love New York, I love Debbie Millman of course,” she added, “and I loved that it was this group of really smart people who were motivated. I had phone conversations with past students who were so excited about what they were doing, and they had these big ideas, and they felt like they knew how to do them.”The work in the SVA graduate program requires a lot of collaboration—something which Gena has carried into her work today.“She’s hard-wired to understand that the best results don’t come from sitting down all by yourself and coming up with them,” said Elizabeth. “They come from being collaborative, and that collaboration is not just with others who are creating, but also with the people you’re trying to solve the problems for. She’s very much a ‘with’ person.”The work Gena feels most passionately about deals in the social sector. She’s found she loves brand theory and bringing a thinking approach to organizations, and it has the added benefit of variety in her projects.

“The corporate world wants expertise; they want to make sure you’re accomplishing this stream of work you’ve set out to do,” she explained. “In the social impact area, in addition to feeling like you’re working with and for people who are really trying to make a difference in the world, they also are willing to give you more space to move.“Especially after I had graduated and I had these new skills and wanted to flex these different muscles, there’s a lot more space for exploration in the social sector.”This focus has led Gena to work with clients like Dalberg, a group of change-makers who work towards a more inclusive and sustainable world, and NSquare, a network of innovators committed to ending the nuclear threat. UNICEF is also on the list and was a particularly memorable project for her.

“We were working with the immunization unit at UNICEF to make a field guide for human-centered design,” Gena recalled. “In the U.S., mothers and fathers demand immunizations, but that’s not true in every country. Sometimes you’re trying to convince people to show up to appointments and ensure their child is immunized against all these things that could happen to them.”It was key for Gena to approach this with a naive mindset, something she does for all of her projects. “When I research, I clear myself of biases,” she stated. “If you base a solution on what you assume is happening or what you hope is the outcome, it’s probably because you’ve seen it in the past and are just recreating something that already exists.”Instead, her approach is about people first. In the case of UNICEF, she explained there are many reasons why parents would avoid going to appointments for immunizations, and they don’t require expertise to discover—merely the ability to ask “why?” to the people directly affected. Maybe they don’t have childcare for their other kids, maybe it’s too far to travel for them, or maybe they’ve heard rumors the vaccinations are harmful.

“I liked that project because it took these academic, complex things we use and put them into simple language,” she said. “And then we designed it in a way that when you give someone this guide, they can say, ‘Oh this looks helpful and like something I can actually do, let me go try this.’ It invites them into the content.”Gena digs to find these kind of solutions, ensuring that, if she doesn’t feel the work is good enough, she keeps going. “I don’t think I’ve ever encountered a person who is more diligent and has a better work ethic,” Elizabeth said of Gena. “She’s developed facilitation methodologies that far exceed anything I’ve ever tried. She’s fearless.”

This Colombian Culinary Staple Comes With A Bold Patterned Look