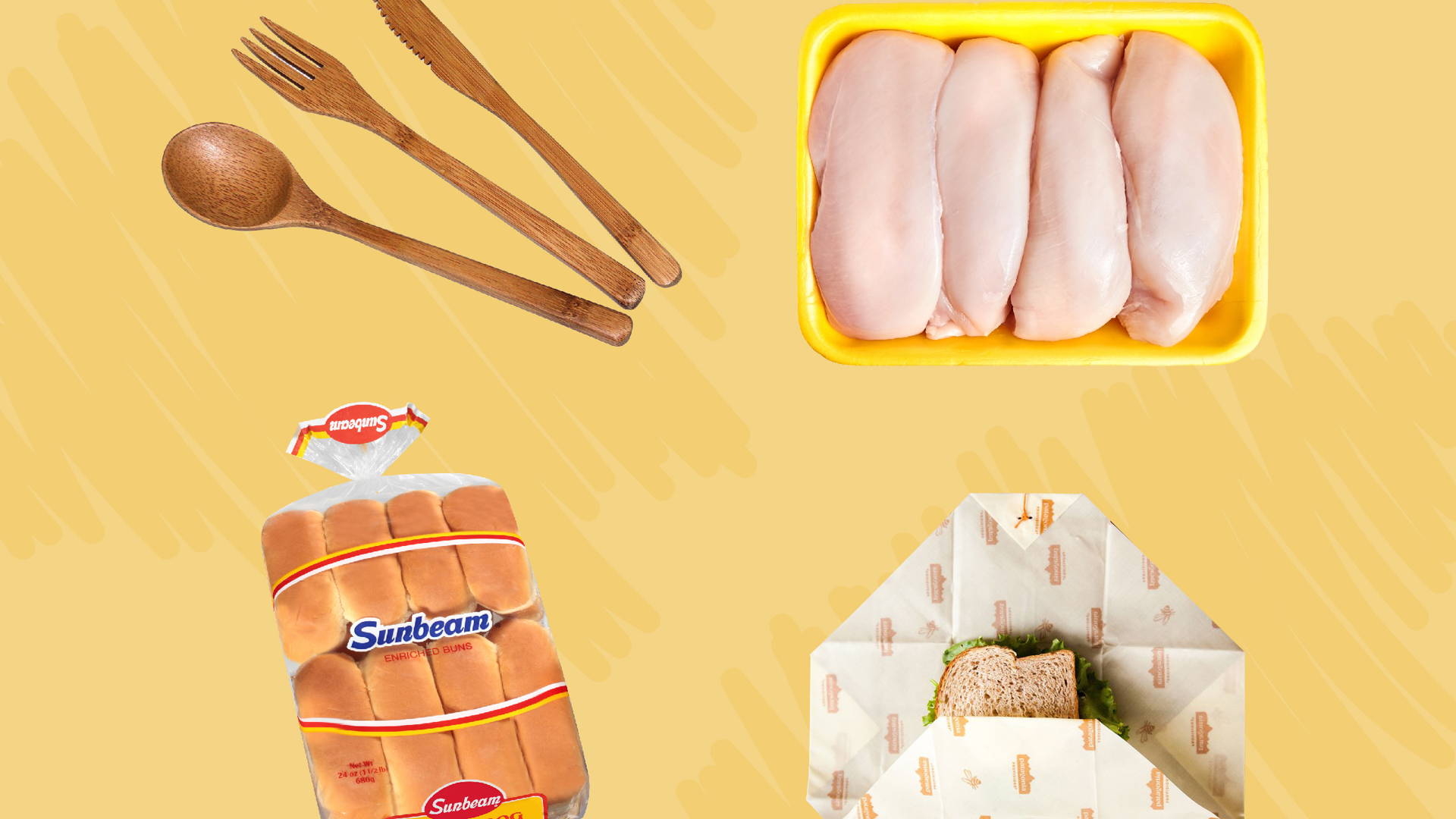 This past month, a few of us at The Dieline decided to take the pledge for #PlasticFreeJuly. This is the first of three articles in the series. Check back tomorrow and Friday for more!***For the entire month of July, I took the pledge to go Plastic-Free with my colleagues at work, as well as 2 million strangers from 159 countries around the globe. #PlasticFreeJuly, in a nutshell, is where individuals choose to reduce their plastic-waste footprint by opting out of using plastic. Multiple pledges could be made, from a day to a month, or you could instead choose to eliminate specific single-use plastic items like bags, bottles, straws and coffee cups. You could even go full-on cold turkey for the month by using no plastic whatsoever.In all honesty, as much as I love Mother Earth, the idea of going plastic-free for 31 days was not my idea. My initial plan was to write a news feature recruiting everyone else to step up and make difference.  That is until my editor decided to throw me in the mix as well.It’s one thing to raise awareness, it’s another thing to commit yourself entirely. I don't like to fail, let alone publish my failures for all to read, and I knew going into this that I was in for a whole lot of unintentional fasting.I conducted my research, documented the amount of single-use plastic I used daily, and discovered a majority of it was beauty and health-related: birth control packet, makeup, face wash, toothpaste, shampoo and deodorant.My motto is to live like you’re broke, that way you’ll always have money. But in doing this, I needed to purchase supplies. I set aside $100 for plastic-free and reusable items and purchased the bare minimum I needed—a stainless steel bento box, bee's wraps, bamboo utensils and stainless steel straws.I waited for July 1st to roll around, except the closer I got, the more my anxiety began to build up.First off, I'd have to start living my life as a day to day grocery shopper because a majority of the food I buy isn't perishable and packaged in plastic. It's not because I don't cook. It's more that I never know if I'll be sleeping at my apartment or my boyfriend's, and I've watched plenty of food go to waste in the past, so much so that it's like watching my hard earned money decompose before my eyes. Plus, with the added convenience of Postmates and take away no longer a viable option since most containers are plastic or styrofoam, I felt my stomach touch my back. It was at that moment I realized I was about to starve and that I would need to change my diet drastically for a full month.

All of which was proven when I stepped into the grocery store on July 2nd with my new pair of eyes that screamed ENEMY every time I spotted a piece of plastic—it littered the shelves and even the produce aisle. No more snacks. No more berries. No more pasta—unless I wanted to spend all night up making it from scratch.  From now until the end of July, my diet would consist of chicken breasts from the butcher that were wrapped up in paper, and miscellaneous vegetables. Thankfully, I had huge bags of quinoa and rice at home already.Secondly, I was flying home to Atlanta for two weeks, and for the most part, I consider myself a go-with-the-flow-easy-breezy type of person. A people pleaser, or as they are referred to in some circles, a pushover.But I also just learned how to raise my voice when it comes to things I am passionate about like gender equality, my opposition to the Dakota Access Pipeline, or my firm belief that In-N-Out burger is wildly overrated. Would I be able to tell my folks face to face about what I was doing and what I needed, or would I sulk in the corner?I struck preemptively and called my parents every couple of days to low-key beg and get them to join in my efforts during the duration of my stay. After four or five persistent and insanely annoying phone calls, I succeeded.Thirdly, I have a moon cycle, and if I'm honest, I'm not ready for switching to reusable period underwear or a menstrual cup. While I have nothing against either, I'm not entirely comfortable with those options for myself, and I enjoy the convenience of a tampon – which now has a cardboard applicator and a paper wrapping.

Sometimes, when you try your best, and you don’t succeed, you end up with a big ol’ list of failures. I should note, this wasn't for lack of trying. In fact, for the most part, I stressed myself out trying to succeed in a plastic-free world.I present to you a chronological list of my failures:

Sustainability is a luxury.I normally shop at a local grocery store that’s not only affordable but just a few blocks from my place. However, the only options for me were produce and canned goods. As a result, I started shopping at a new grocery store, which not only required more time to get there but more cash. This is something not everyone has the luxury of doing because they're not thinking about their plastic-waste, they're thinking about their next meal, and not having to drive three towns over for groceries. Also, not every store lets you buy in bulk with your own containers like Whole Foods.A friend recommended I try my local farmer's market as you can opt out of containers, or just return them to the vendor if you've brought your own. That's all well and good if you have weekends off to go to one of those, but I typically work most weekends. Again, it wasn’t a viable option for me.When I’m grocery shopping, I’m not just thinking about what I'm going to eat: I need to know if I'm going to have time to cook it. This month, I tried my best to meal prep so I wouldn’t stress over takeout containers or finding time to sit down at a restaurant. Ultimately I was saving money, but the only downfall is that, sometimes, there's just not enough hours in the day to get it all done. Afterall, I work two jobs.Lastly, you need to have the funds to get started. I'm not pinching pennies to get by at the moment, but I consider myself a budget queen and a minimalist. Having to purchase reusable containers not only hits the wallet pretty hard, but it adds a lot of clutter to your place, especially if you have roommates. All I had when we began was a reusable water bottle I got from a conference. I don't have Tupperware or an electric toothbrush, and I don’t wash my hair with shampoo bars. Had I rid myself completely of plastic, I'd be in the hole a few hundred bucks.

If you haven't gathered this by now, I failed – belly flopped straight into the water where your body is still tingling failed.Despite failing, I’m proud I took the pledge, and I tried my hardest to stick to it. Sure, I had a couple of mishaps, but if you compare my use of plastic to the month before, there was a significant decrease. I stopped eating out, and I go to butcher now instead of buying plastic-wrapped meats. I found different stores to buy things that weren’t packaged in plastic, with the exception of the vegan cheese I regularly devour because I’m lactose-intolerant.All in all, I survived a month that felt beyond difficult every day. There were days where I felt anxious, days where I over thought every little thing and said no to others I wanted, and even felt like I needed. But all of that, those moments of anxiousness and bits of struggle, are part of it.  I am capable of not using straws or single-use drinkware and bringing my own reusable shopping and produce bags. And while I’m trying to be mindful of my plastic-waste footprint and raising awareness, I admit, I am not capable of living a plastic-free life.But that’s OK. The journey to a sustainable lifestyle is a marathon, not a sprint. It's totally okay to take baby steps and to work at your own pace. The fact that you care enough to try at all is awesome.

Identité – The Bespoke Beauty and Grooming Service Powered By AI

This Ice Cream Packaging Was Designed To Show Some Love To Ottawa, Canada