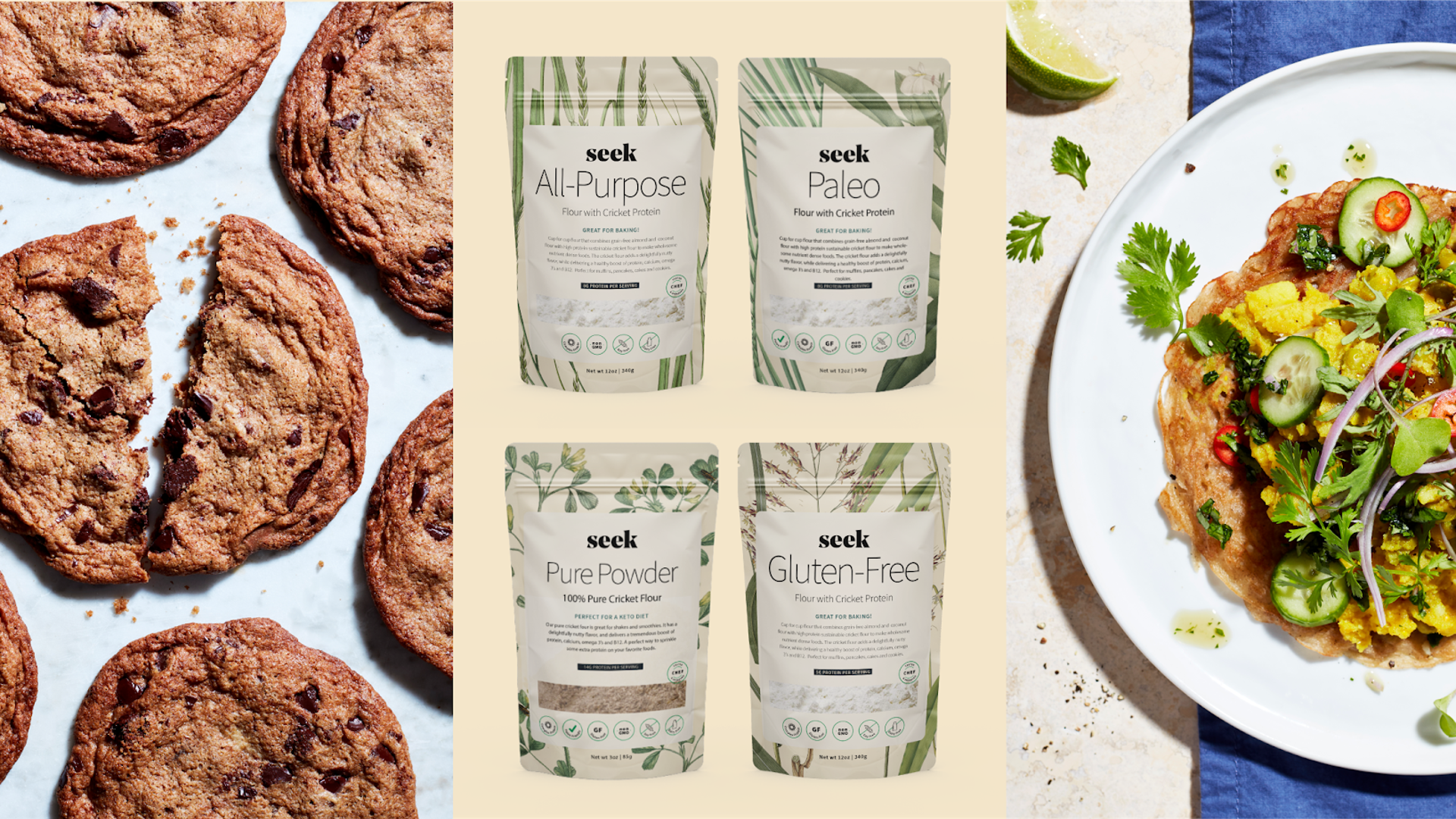 Dive Into The World of Cricket Flour With Seek

Founded by Robyn Shapiro in 2016, Seek strives to normalize the consumption of crickets, and why wouldn't she? They've got a ton of protein and are high in Omega-3s, B12, iron and calcium. For the environmentally-concerned foodie, there’s an abundance of crickets in the world and their production doesn’t release anywhere near the number of greenhouse gases like cattle, sheep, pigs and even chickens.Now, they’ve teamed up with a few James Beard award-winning chefs (and a few Chopped champions) from around the country and released a cookbook stacked with recipes like Adriana Urbina's spiced sticky sweet plantain cake and tamales with cricket masa and braised bison by Sean Sherman.Why? They’re releasing a cookbook as an incentive if you back their Kickstarter so they can produce and package their new line of four cricket flours—all-purpose, paleo, pure powder and gluten-free.The story of Seek began with a report printed by the United Nations on edible insects, which Shapiro immediately read from start to finish. "To me, it made so much sense because there's a tremendous amount of traditional value that you can obtain from crickets," says Shapiro."Plus, we really have to start embracing crickets if we want to reverse some of the climate changes we got ourselves into."For those intimidated by the thought of putting an insect into your mouth, it's important to note that, not so long ago, insects were considered the other white meat. For some countries like Mexico and Thailand, they're still considered a routine snack or meal. Seek already sells energy bites and granola, and according to their customers, when they take a bite for the first time, they don't taste anything unfamiliar."We designed it this way," shares Shapiro. "We want people to have a familiar eating experience, where they’re getting used to the idea that they’re eating crickets but not necessarily the flavors just yet."  "The different flours can be targeted to different people's diets,” says Shapiro. "Our gluten-free flour can be used cup for cup for whatever your favorite recipe is, and unlike other gluten-free flours, it leaves the baked goods moist and delicious."The paleo includes natural ingredients like almond and coconut flour, while the all-purpose cricket flour delivers 40% more protein and a more whole-wheat flavor than the average one. "The pure powder is just 100% crickets ground up, which is really good for people who are following the Keto diet as it's extremely low-carb," adds Shapiro.  Now, just like any other completed product on the market, you need a well-designed package and branding to sell, sell, sell, which Shapiro did in-house with the help of Kiri Coles, senior designer of Big Spaceship in New York. "We knew that when asking someone to go a little bit outside of their comfort zone, or a lot for some people, we were going to need to do everything better than the next guy," begins Shapiro. "We were going to need our products to taste better, our flours to perform better, and our packages to look better."

At first glance, the eco-friendly pouches appear to be nothing more than beautiful botanicals, but in reality, there’s a lot of thought and consideration in each of the designs. The Paleo Flour features an arrowroot plant, one of the essential ingredients for that particular flour.The only one in the collection to stump Shapiro was the pure-powder. "I deliberately didn't highlight the crickets on our packaging because I want this to be comfortable for people, and that was something that could turn people off," states Shapiro. "The illustration on the pouch is alfalfa wheat, which is what crickets are eating, both in the wild and in a farmed environment."The imagery on all the pouches are vintage botanical illustrations, which were available in the public domain, then touched up by Coles.With the design out of the way, a new challenge arose. How do they fit all the information regarding the crickets, their nutritional value, and sustainability story while still delivering an elegant pouch? Eventually, after going back and forth, they landed on a solution that involved scaling the size of things down, and the packages for the flours officially greeted the public on Seek's Kickstarter.“We’re all about community and this movement to get people to eat insects and crickets is an effort we can’t do alone, which is also why we reached out to chefs and started the campaign,” shares Shapiro. "It's a great way for people to join our efforts and tap into all the different perks."The rewards range from discounts on the flour, or a vintage flour sack tote, to a 1-on-1 session with Shapiro herself. You can even win a private dinner with one of the chefs featured in the cookbook.Seek’s efforts are not going unnoticed. Within the first seven hours, they reached their goal of $25K. Then, they decided to stretch their goal to $50K, which will help the company distribute flours to even more stores around the country.Seek's Kickstarter runs from now until August 8th. To find out more, go here.

Penhaligon's Range of Fragrances Are Inspired By Iconic London Neighborhoods