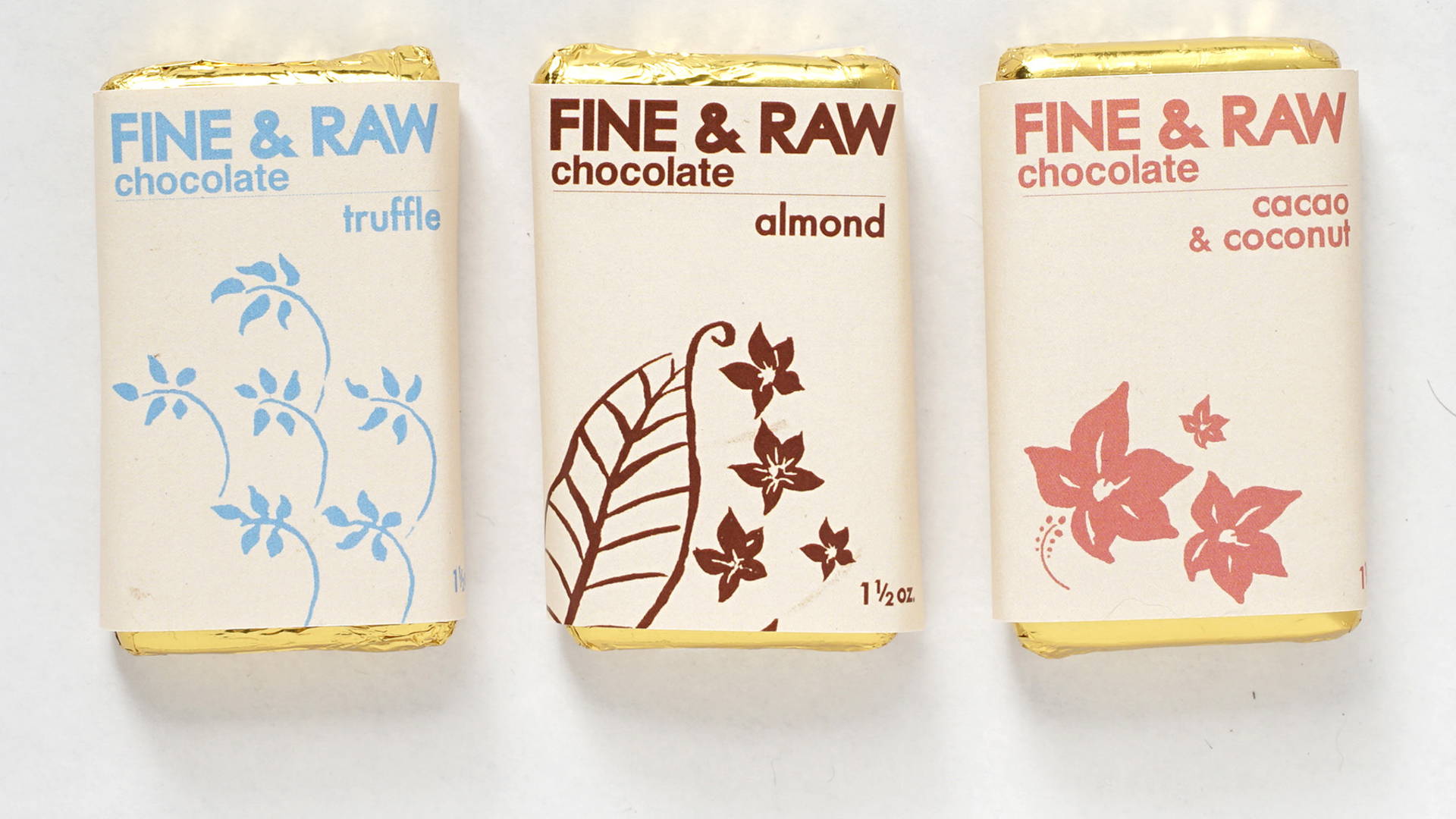 FINE & RAW Redesigns Their Packaging and Even Adds 2 New Flavors

“It’s not that I fell in love with chocolate because I’ve always been in love with chocolate," says Daniel Sklaar, founder of FINE & RAW. "Chocolate is my passion."What better way to stay true to your passions than to produce small batches of chocolate in your free time until it eventually blossoms into your career?In 2007, Sklaar left his job as a chef, thanks to the support of his friends, and officially began FINE & Raw in his modest loft in Williamsburg, Brooklyn. After a successful inaugural year, he moved to a kitchen in South Brooklyn in 2008, before building out his very own chocolate factory in Bushwick in 2012.

Over the last decade, FINE & RAW has created a name for themselves in the artisanal and raw chocolate industry, and along with it, a desire to revamp the packaging for 2018.The original designs were done in 2008 on brown craft paper and featured imagery from cacao farms mashed with his favorite house band from Berlin, Credenza, which resulted in minimalistic designs of leaves, florals and scripted font. Monochromatic, eloquent and simple."Back then, brown craft was pretty innovative, Avante-Garde and a popular expression of artisanal goods," states Sklaar. "So, a lot of the thinking behind the redesign is that FINE & RAW is very much a creative brand.”The redesign originally kicked off as a rebrand with designer Heidi Chisholm. "We put together three alternate brands, which was a really interesting process," says Sklaar. Unfortunately, we ended up trashing all three because it became apparent that this was not the right decision for us. In fact, it was too much of a departure from who we were, and we wanted to stay much closer to our brand."

"Chisholm advised me not to go for a rebrand," he adds, "but I adored her work so much I wanted to create something with her. Plus, as a creative, I wanted to explore all of my whimsical ideas and dreams."Sklaar's next vision involved an illustrator who could pay homage to his original packaging but preserve its unique qualities in a market flooded with similar designs and branding."I brought on Richard Becker, an illustrator, who did several iterations and hand sketches of the imagery we originally had," shares Sklaar.Together, they stumbled upon a slew of surprises throughout their creative process, and a few made their way onto the final design, giving it the added flair and personality Sklaar craved. There are even two new flavors that are sure to have chocolate lovers drooling.“The first chocolate bar is Cashew Butter, and it’s ridiculous," states Sklaar.  "We take cashews from Indonesia, stone grind them into cashew butter, and then infuse that into the chocolate with vanilla and lucuma. Lucuma is a Peruvian food that kind of tastes like toasted marshmallow cookies, with overtures of dark chocolate but made milky through the nut butter."

The second, a Plain 70% Cacao chocolate bar. This flavor emphasizes simplicity,  a common theme found throughout his collection. According to the press release, this bar blends the best cacao beans in the world with coconut sugar and cacao butter.   Better still, the bars are now 40% slimmer as their thinner appearance determines the way one experiences the chocolate.  "To simplify the food science behind it, think about surface area and depth," begins Sklaar. "If you have a larger surface area that is not as deep, the melt time is quicker. By producing a slimmer bar, the chocolate melts on your tongue quicker, which results in the flavors being released sooner.”“The sensation of chocolate in your mouth is much more satisfying," he adds.But every satisfying bite of chocolate, everything he has done in pursuit of this passion is due in part, Sklaar believes, from seeking out his mentors and facing his fears head-on."At times, I was scared about the faith in myself," says Sklaar. "I struggled to get going sometimes, as well as being comfortable with the pace of creativity. Sometimes it's slow, other times it's fast. It was honestly a mental challenge that I worked throughout the duration of the project.”Nevertheless, he persisted, and at the end of the day, his passion was always greater than his fears.

This Range of Spirits, Beers and Ciders Gets a New Cohesive Look Thanks To Robot Food

Suds with Buds? Marijuana-infused Beer on the Rise