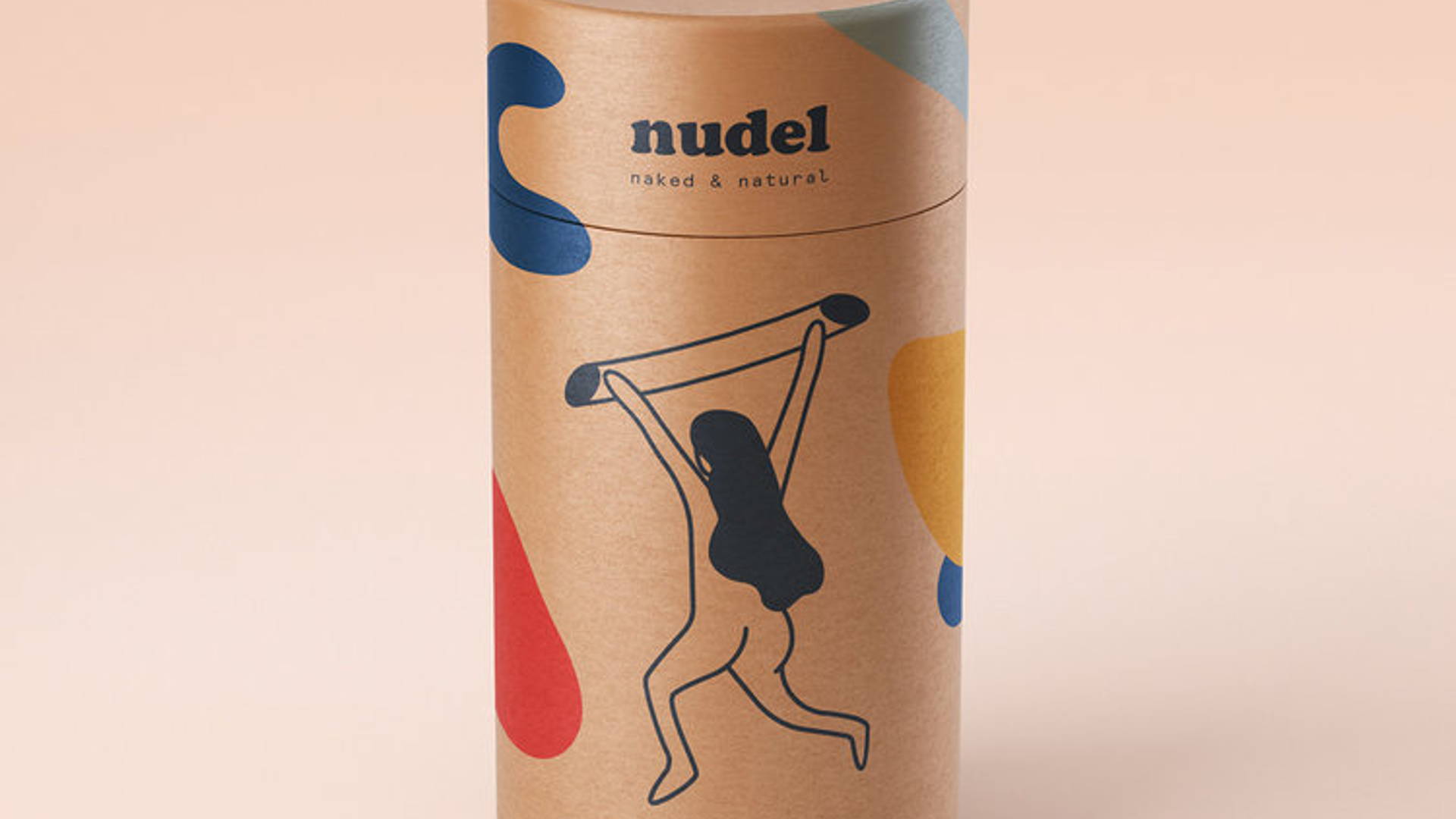 Nudel Serves Up Cheeky, Naked Pasta With This Concept Design

Have you ever seen packaging get naked to showcase their all natural ingredients?Well, there's a first time for everything and Nudel, a concept crafted by Chloe Hubler during her junior year of college, serves up a cheeky yet clever take on farm to table pasta.With tasteful outlines of human cartoons posing in the nude with pasta to cover up their various nooks and crannies, the design is both unique and spot on for her target demographic of young adults in their 20s.The process for her project started with the product and determining what kind of food she'd like to develop a brand and packaging for. Next, she had to decide on a name that wasn't trademarked yet, one that resonated with her vision and was catchy enough to remember.

When Hubler landed on pasta, she brainstormed for names until eventually found herself torn between Nudel, Lucio's and Mangia. "I chose Nudel because it was fun and played off the word noodle while also encompassing the farm to table aspect, which is why the tagline is ‘Naked and Natural,’” adds Hubler.With the name and concept established, it was time to hit the drawing board and create the 3D rendering, something that proved to be her greatest obstacle."This was the first packaging project I had ever done, and I never realized the challenges involved in creating something physical," shares Hubler. "I had to design for a 3D space while trying to find a way to make the product enticing and develop a brand that made sense with the material."Printed on a black cylindrical base, the original design consisted of a rectangular label with Nudel spelled out in noodles, but the illustrations of the nudist continued to be the main attraction."I wanted to produce a brand that was engaging, accessible and responsible," starts Hubler. "Yet, when I turned this project in for school, I had a higher-end brand that didn't seem to reach the users my brand was geared towards."

When Hubler returned to this project recently, she kept only the recyclable packaging tubes and the naked illustrations. The rest was on the chopping block because this time around, she wanted to deliver the joyful and accessible brand she sought out to in the beginning.Now, Nudel is printed in clean text on the top of the container in the same color as the illustrated figure. The cylinders come in varying colors, based on the type of pasta, and instead of being plain, they feature miscellaneous shapes and designs that add an extra pop of color.The one thing to remain the same was the large role sustainability plays in the packaging. "It was one of the first considerations I had to make in this project," says Hubler. "The purpose of the 100% recyclable cardboard tubes was for the customers to return them to the Nudel for recycling in exchange for discounts on future purposes and as a pat on the back for helping out the Earth."At the moment, Hubler isn't trying to get her concept produced but loves the idea that one day it might get picked up by a larger company with the resources to make it happen.“I believe it could be refreshing take for a pasta brand,” states Hubler.

Check Out This Clever Wine Packaging For a Seafood Restaurant