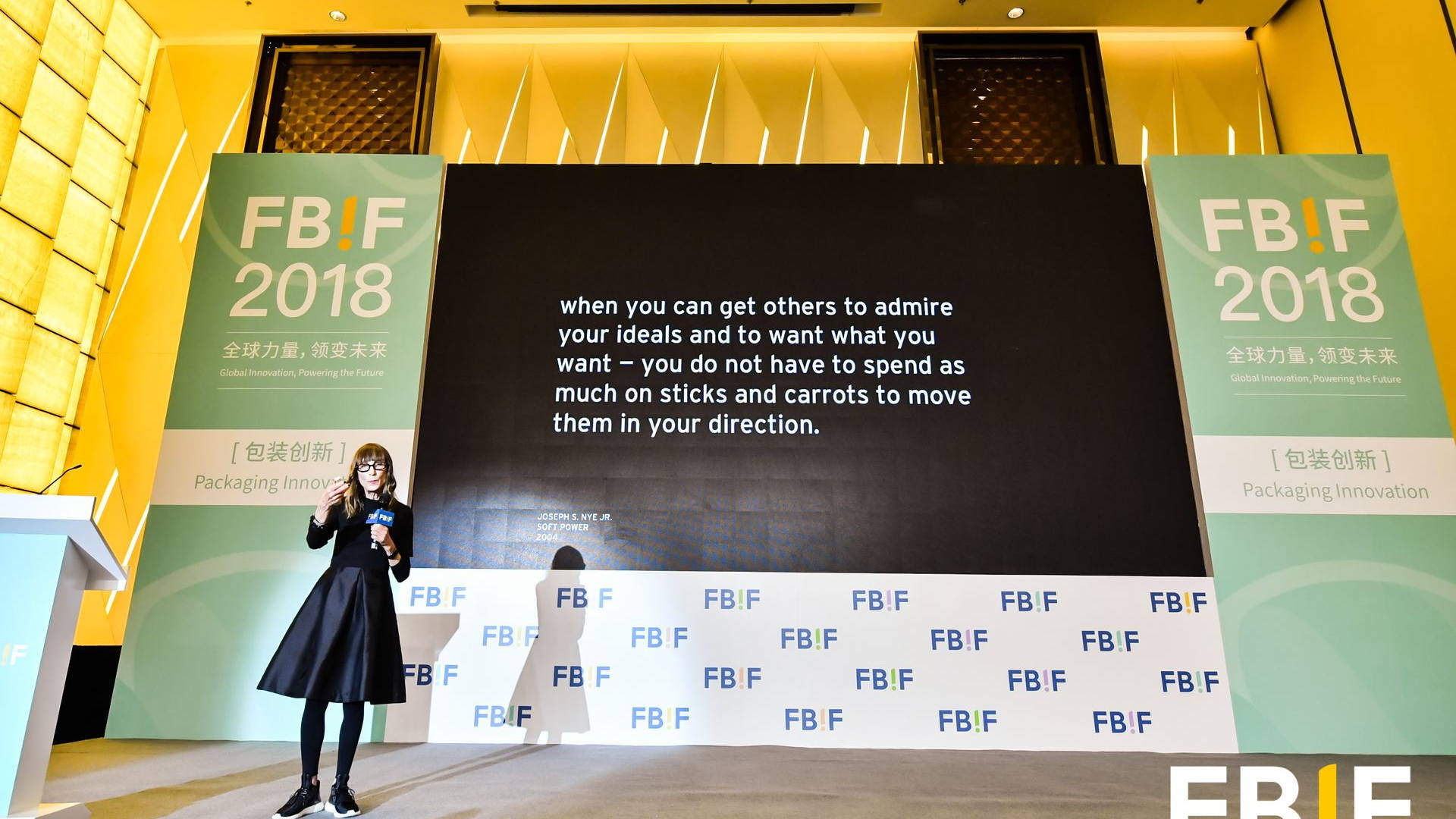 “Design is transformative. It changes people and brands. But without realization, it doesn’t reach its potential.” - Moira CullenAs a designer, you sometimes have to fight hard enough to get a seat at the table. But once you’re there, how do you actually get people to listen to you? How do you make your ideas heard and put into action?There’s the obvious route: tell people what they should do and make your case as best you can. But what if you could get people to do what you want without even having to say it to them?This is what soft power is all about.“Soft power’ is a term coined by Joseph Nye,” Moira Cullen, VP Global Design of Fortune 500 Companies Including PepsiCo, The Hershey Company, and The Coca-Cola Company explained onstage at Food & Beverage Innovation Forum 2018 (FBIF 2018). “Whereas hard power gets others to do what we want, soft power gets others to want the same thing we do.”Consumers today are ruled much more by feelings. While a product or service has to work, so much of our purchasing decisions come down to emotions rather than our more rational impulses. Up to 90 percent of decisions aren’t even made consciously.“Emotion is what drives people to action,” Moira said. “More and more consumers are looking for real meaning and things that resonate with them, and that emotional component is a critical factor.”But soft power isn’t about manipulating the way consumers feel to achieve a common goal; instead, it’s very much rooted in truth. “You have to have grounding,” stated Moira. “You need to understand what the brand is about and internalize that. Learn as much as you can about the category and the company, and articulate it well.”Harnessing soft power is especially important in a VUCA world (one which is volatile, uncertain, complex, and ambiguous). Consumers aren’t oblivious. They sense gimmicks and ploys set up merely to get sales, and it is not enough to say you’re authentic—you actually have to be it.

“Yes, you can have a cool design, but if it’s not appropriate for the brand and someone tries to sell it, it won’t work,” explained Moira. “It’s about authenticity. Designers have to fulfill the promise of the brand and be honest with themselves.”In the design world, soft power comes into play in two ways.The first is for the designer who is struggling to get their ideas put into action. It may be blatantly obvious from a creative standpoint what the best solution is, but it can pose a challenge to communicate this to the more practical-minded people at the table. The way to sway opinions is not to go to battle with the folks you’re working with, but instead to join the conversation in a positive way.“Designers need to have a soft power to be part of that conversation,” emphasized Moira. “They have to work within the company with trust, respect, and transparency.”Moira has experienced this herself with Coca-Cola. “At the time, their design had to be covered with the fake dripping water, but that just didn’t feel like a 21st-century refreshment. But they insisted it had to be on the can. So I went ahead and made a different data point.

“I couldn’t force them to do what was right, so creatively I thought about other data to create a story.” Moira took responses from a customer survey and created a word cloud of those who responded with their own words.“I saw the story of happiness,” she said.From there, she advised designers to have small conversations to influence people in a proactive way. While the size of the design team or the budget may never be very big, it doesn’t mean designers can’t recognize a creative, equally persuasive power. It’s all a series of strategic choices.Secondly, brands also use soft power. “A great example is Apple,” Moira said. “When they went to retail, people were very cynical about it. But they ended up redefining retail.”

At an Apple store, it’s more than just the technology; instead, it’s a world where products can be removed from the packaging and consumers have the chance to interact with each item. “Yes, they do advertising still,” added Moira, “but design is their real soft power.”So next time instead of trying to command a forceful power over people, try to attract them to you, so values and emotions align. The power is there—it’s a matter of harnessing it. “It’s influence rather than persuasion,” emphasized Moira. “It really changes things.”The Dieline was invited to see Moira Cullen present at the Food & Beverage Innovation Forum in Shanghai China, April 18th-20th. Learn more about FBIF here.

Casa Bosques Serves Up Beautiful Chocolate With The Paris Review

Boho – The Only Limit Is Your Imagination