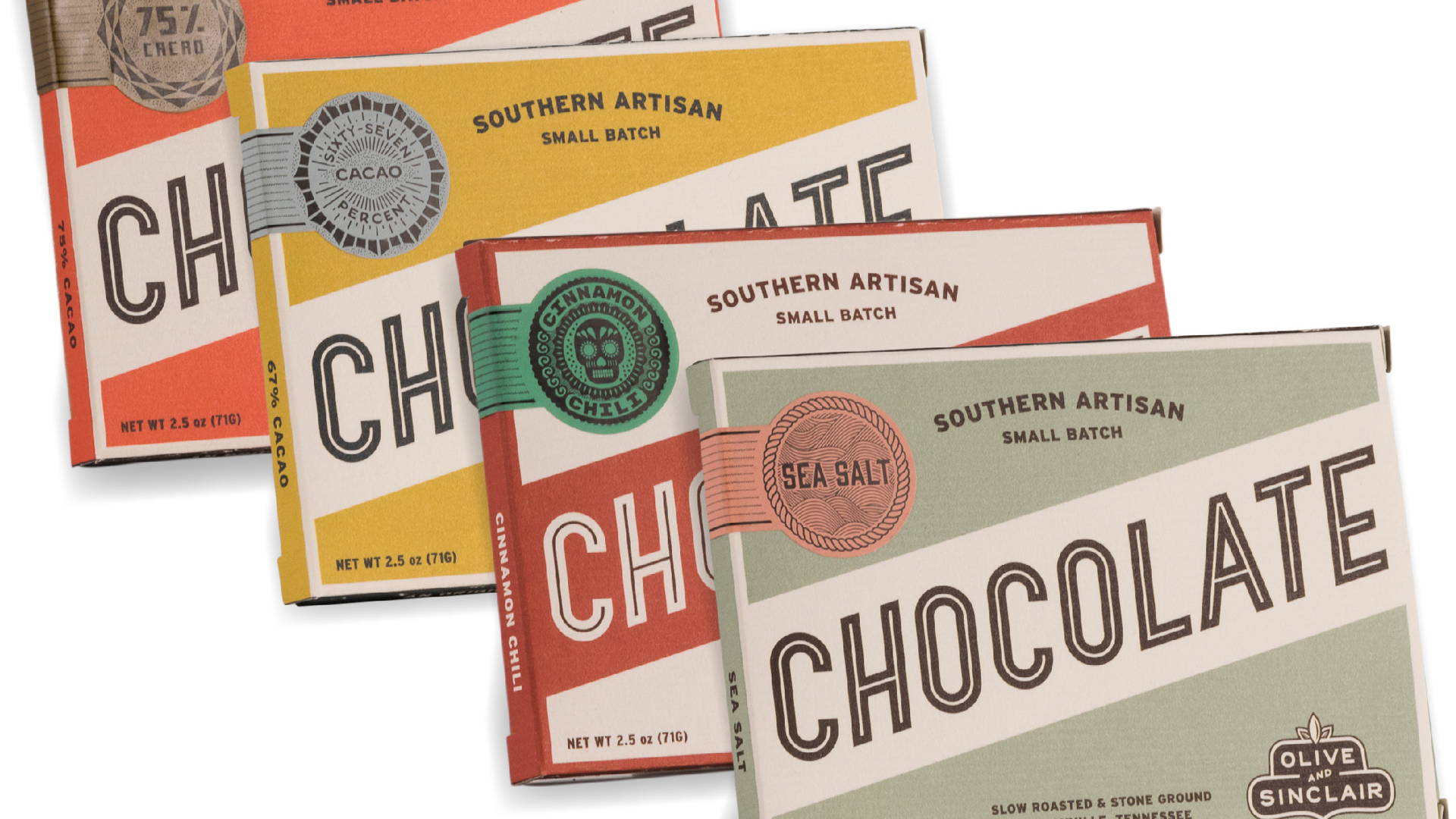 In an age where consumers constantly want newer, better and updated versions of everything they own, Olive & Sinclair is a relaxing step back in time. Sure, this bean-to-bar chocolate brand has only been around since 2007—but one glance might convince you this is the same chocolate your grandparents picked up at the general store when they were growing up.“I wanted Olive & Sinclair to feel approachable,” explained Founder Scott Witherow, “like it had been around for 100 years, even though it hadn’t. I wanted it to look classic.”The trend of retro-inspired packaging continues to grow, but for Olive & Sinclair, it isn’t purely aesthetic. They put innovative new twists on beloved sweets (like their Muzzle Loaders which put a spin on the bourbon ball), but their brand values and practices embrace the traditional. Even their brand name comes from two family ancestors—Sinclair references the grandfather on his mother’s side, and Olive is a reference to his wife’s great aunt.

“I’m a borderline hoarder of old stuff,” laughed Scott. “I just love old buildings, houses, cars, and antiques. If you come to the factory, you’ll see what I’m talking about.”Olive & Sinclair has made its home in what was initially a grocery store from the 1920s that was later turned into a bakery. Once the key machines, roaster, and tempering units were laid out, he went on a hunt for the perfect antiques to fill the space. Visitors who stop by for a tour will find a vintage neon diner sign reading “EAT," antique lighting from an old army barracks, and support beams made from 200-year-old pine.The process itself also has some nostalgic aspects to it. Most notably, Olive & Sinclair uses melangeurs (stone mills) from the early 1900s, and the cacao beans are ground to create their line of treats. It’s a method also used for stone ground grits—a perfect fit since they’re based in Nashville, Tennessee.From there, the blur between old and new starts to happen. “Using pure cane brown sugar was my initial Southern knee-jerk reaction,” Scott mentioned. “I’ve been in kitchens my whole life and when I tested it out on folks most preferred it to white sugar.”He’s also experimented with other items not typically used in chocolate. Molasses makes for a nice, slow sweetener for certain products in their line, they’ve used bourbon barrels to create a bourbon brittle, and their white chocolate is made with buttermilk. Scott added he turns to local producers and uses nothing but fair trade and organic ingredients. “Most of what we do is inherently Southern.”

“We wanted to make a mark so Scott could do any kind of sign with the logo,” Riley added. “You can make it neon, a marquee sign, you can put light bulbs in the letters. You’re not backed into a corner.”When it comes to new old-fashioned, Olive & Sinclair does it from the inside out. “There’s a sense of romanticism about doing things the old-fashioned way,” Scott added, and this nostalgia for simpler times which we see on the packaging comes from the heart of the brand itself.“We’re not setting out to be huge makers. There are newer ways to make chocolate,” explained Scott. “It would be easier to use a bowl mill, and we could make more product. But where’s the fun in that—where’s the love in that?”Thank you to the Nashville CVC (1-800-657-6910) for introducing us to Scott at Olive & Sinclair.

Now You Can Rosé All Day With Winc's Summer Water Societé