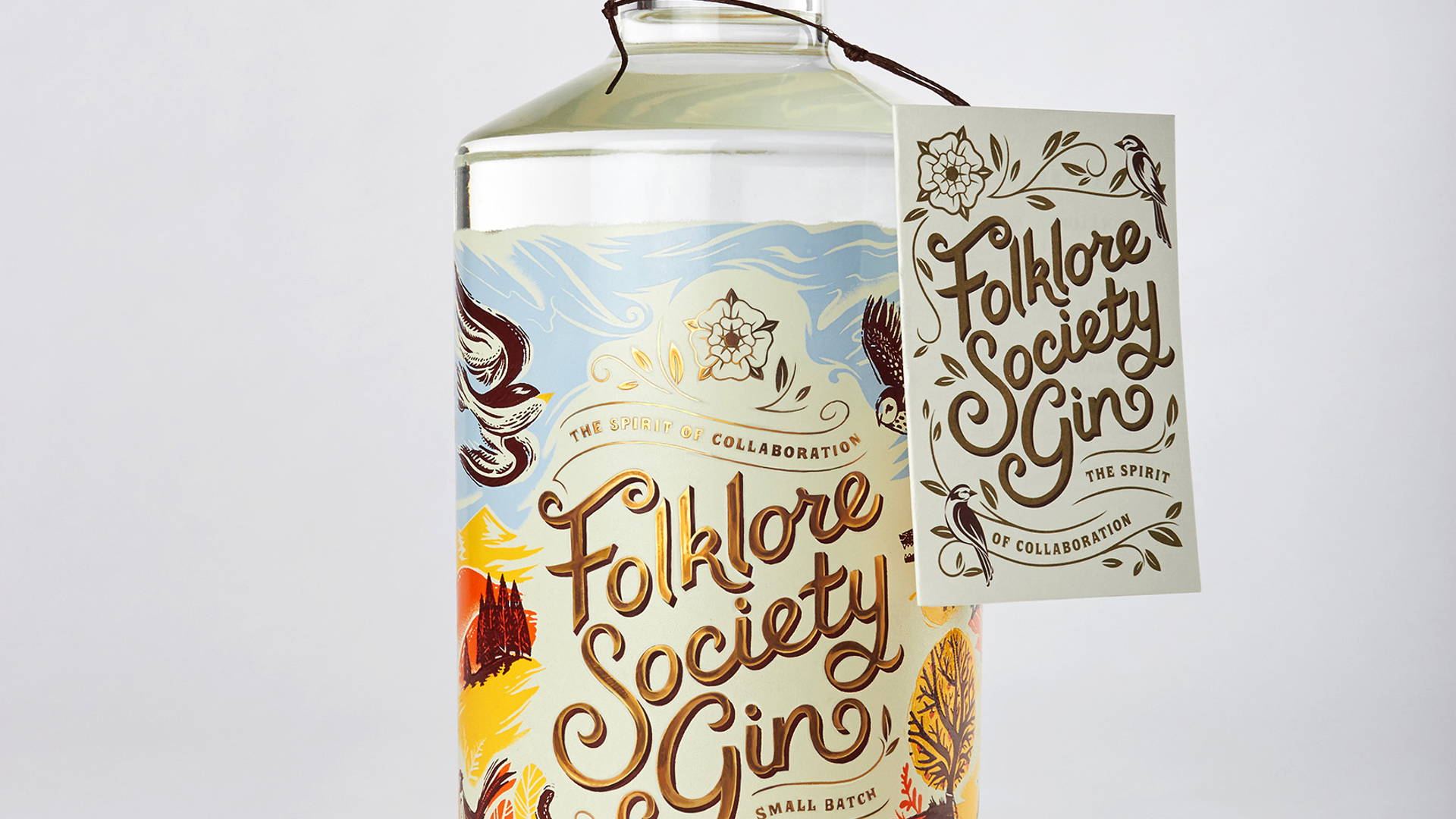 Check Out The Whimsically Colorful Packaging For Folklore Society Gin 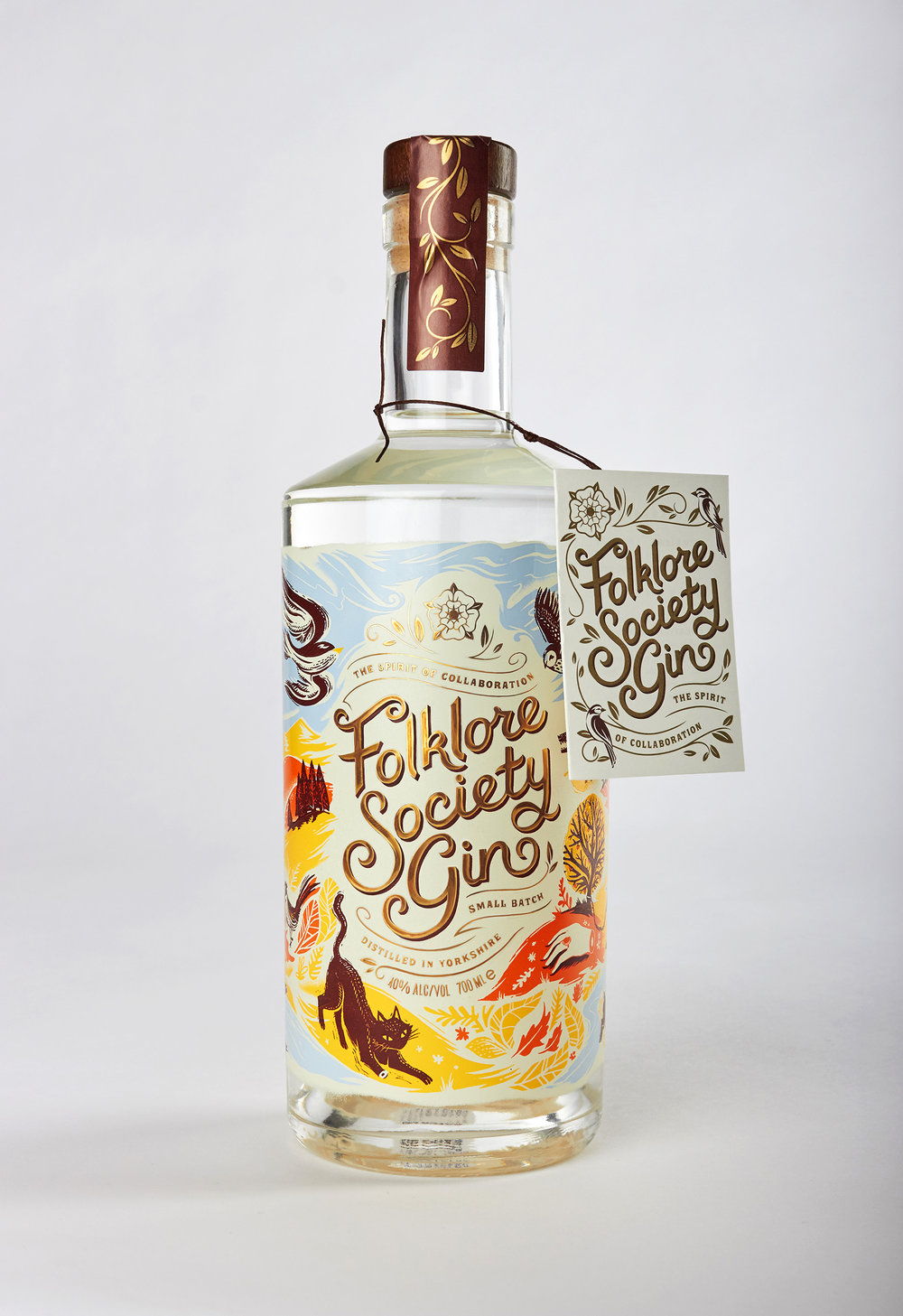 Analogue Creative Ltd designed this whimsical and expressive packaging for Folklore Society Gin. The project serves as a promotional piece for UK-based printer Allied Glass, as it incorporates a unique bottle shape and the use of thermoplastic inks in order to achieve an eye-catching result. 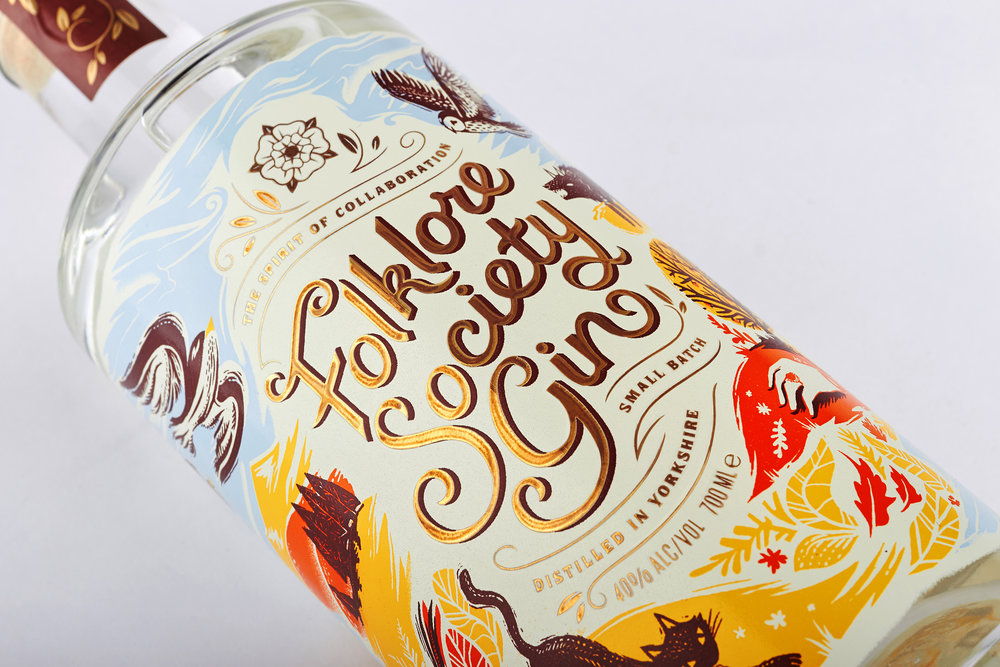 Once upon a time (2017) in a land far away (Yorkshire, United Kingdom) a company called the Folklore Distillery made a tasty drink (gin) infused with local fruit (plums and figs). As its name suggests, stories are very much part of the brand, but what the name doesn’t tell you is it’s not really about gin or stories. It’s about an enormous printing machine known as the Kammann K15 CNCM16, a bottle named after a local 19th Century philanthropist and a company called Allied Glass.

Allied Glass had recently invested in the Kammann K15 CNCM16; an impressive piece of kit that allowed them to print six colours directly on to glass. It uses thermoplastic inks that dry instantly, so multiple colours can be laid on top of each other without smudging. To summarise, it was a very big deal for them.” 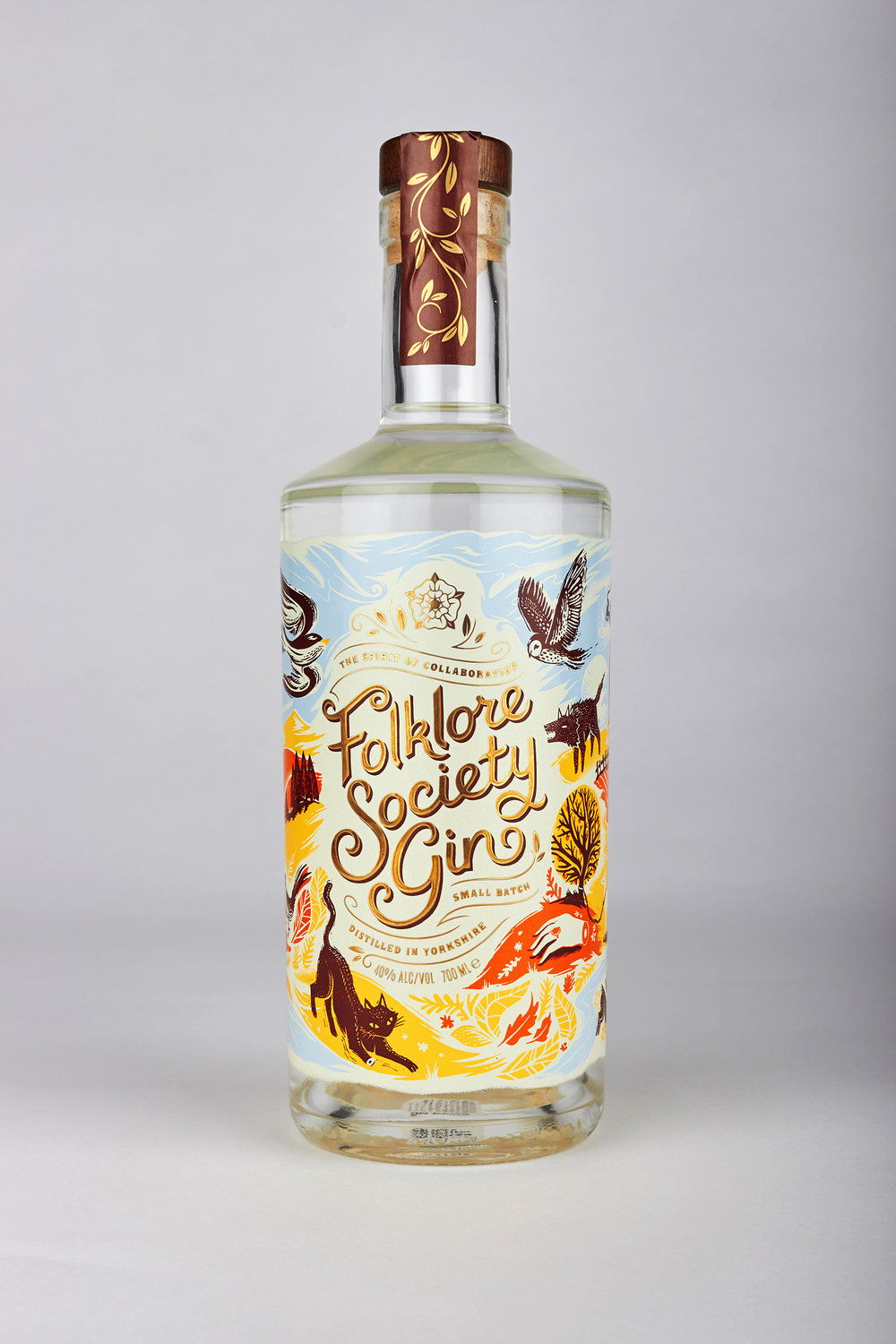 “They had also developed Titus: a beautiful new stock bottle made using premium flint. It was named after Sir Titus Salt, a 19th century manufacturer, politician and philanthropist from Yorkshire, but he’s not particularly relevant for the sake of this story.

Allied Glass’s brief to us was to tell the world about these two important revelations. To get people to sit up and take notice; get their eyebrows raised at the new bottle shape; get them salivating about the possibilities of thermoplastic inks.

We needed to show people how good the bottles could look with a little creativity, and that’s how Folklore Distillery was born – a unique way of using the bottles to retell local folklore. Our first spirit was Folklore Society Gin, produced in partnership with a local artisan distiller, Leeds Gin. The bottle features hand-drawn typography working alongside relief print illustrations, and depicts the local tale of Lady Sybil of Todmorden.” 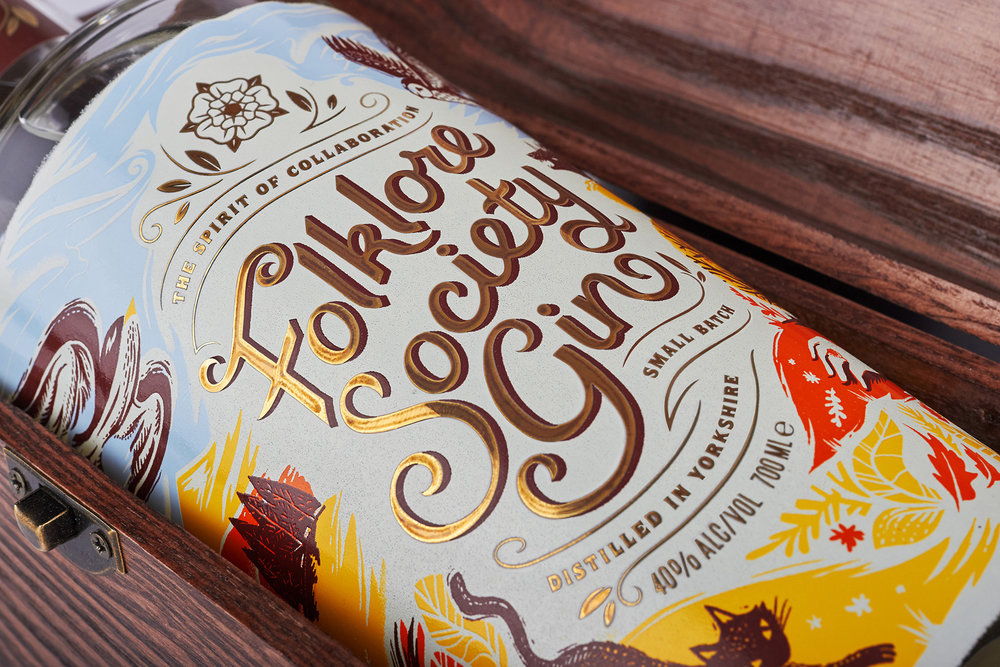 “Her full story is faithfully retold in a four-page booklet that hangs from the neck of the bottle, and on the website. But if you’re looking for a quick summary, it’s just your average tale of selling your soul to the devil and money and witchcraft and greed and cats and severed hands and we’re probably not spoiling much by saying it doesn’t have a massively happy ending.

The relief print illustration style was chosen to reflect the traditional feel of folk arts and crafts and is finished with a final colour of precious metal ink. In fact – and in keeping with a tale of money and greed – each bottle contains a small percentage of real gold. It’s hardly something you’d want to leave in your will, and cashforgold.com probably won’t be interested, but it might make you look at the bottle in a slightly different light.

So that’s the story behind the story that isn’t really about a story, but is about a company’s smart way of showcasing their new bottles and printing to their clients. A taste of Yorkshire with a tale of Yorkshire, all created by a team from Yorkshire. The fact that what’s essentially a promotional piece has gone on to be stocked by bars and retailers across the county (including Harvey Nichols) we hope is not only testament to its great taste, but also its unique design.The Folklore Distillery was never about storytelling; it was simply about doing. But we can’t use the word ‘story-doing’ because we’d really hate ourselves.”

Have You Seen the Worldwide Winning Designs from the iF Awards?