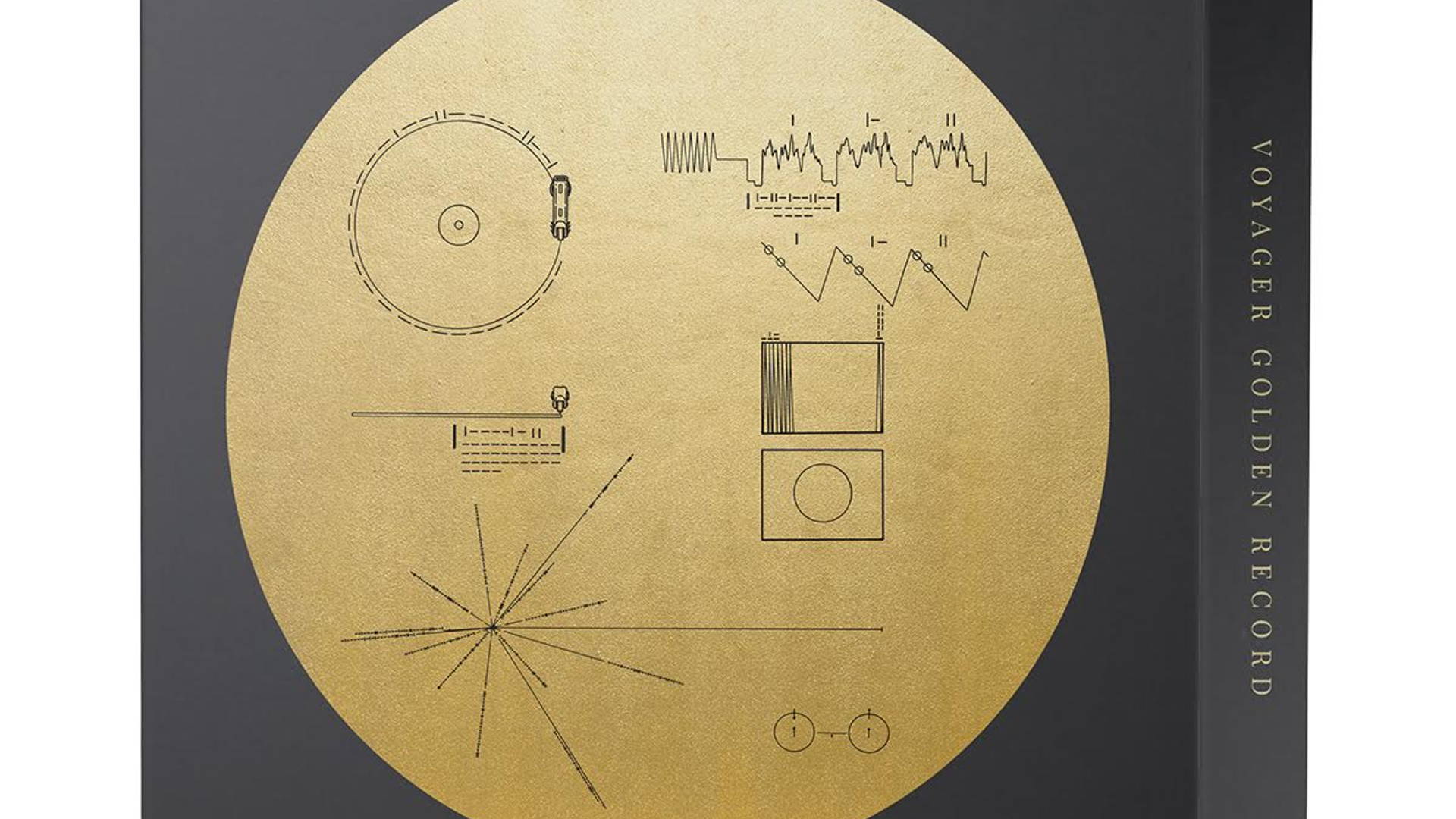 40 year ago, NASA launched two Voyager spacecraft into deep DEEP outer space to study our solar system and in hopes that one day, aliens (or future humans) would find it. The coolest part, attached to each spacecraft is a golden-plated phonograph record that features iconic music, greetings in 52 languages, laughter, news, how life came to be and other radical things showcasing the history and culture on Earth.   Intrigued by NASA's accomplishment, Lawrence Azerrad, David Pescovitz and Timothy Daly created Our Voyager Golden Record: 40th Anniversary Edition, as a way for humans in the now to enjoy the LP at home. We caught up with Lawrence, the graphic designer and creative director of the record, to discover the extensive journey behind this Grammy Award-winning vinyl.

The golden record began as a Kickstarter to celebrate Voyager’s 40th anniversary. Whose idea was it to create vinyl?Lawrence Azerrad: David Pescovitz and Tim Daly knew each other through record shopping circles in the San Francisco Bay area. The idea of the Golden Record on vinyl came from their musings on the idea. The originals are in space, mounted to the twin Voyager spacecraft, are on (gold plated) LPs. It only made sense that they should be released here on Earth as an LP. The tracks on Voyager are compiled as streaming playlists, and a Voyager synopsis project was released on CD-ROM in the 1990s, but there is something about the information encoded in the grooves of an actual record that seemed to be the truest and most fitting fulfillment of honor to the original. It was our goal to honor the spirit of the original, not recreate it per se, but to create the most fitting homage as possible.We never considered anything other than an LP release. Pescovitz and Daly went to great lengths to master the pressing of vinyl from the original Voyager tapes deep in the Sony archive. At the outset of our project, it wasn’t certain if these tapes would be accessible, but amazingly, they were found. So, the pressing of the 40th anniversary LPs are from the exact same master recordings that were used to make the records currently flying through interstellar space.

How was it working alongside David Pescovitz and Timothy Daly?Lawrence Azerrad: We shared a deep passion for the subject matter and an enthusiasm for the success of the project. In short, it's safe to say the project wouldn't have come out the way it did without the three of us pushing each other. We all had different areas of expertise. Tim was a master on music and print production, David’s background as a journalist uncovered invaluable details, and  I have a long history of design in music. But it was a collective accountability, the three of us all watching each other, and that elevated the project.Walk us through the design process of golden record, how did you go from start to finish on this project?Lawrence Azerrad: From the start, we wanted to create a package that was designed with a sacred honor, as an art object and a museum-appropriate tribute to the concept of the original Voyager Golden Record. The very concept of the original record in space is otherworldly, ambitious, audacious, and poetic. It teaches us about humanity’s best self and it’s a reflection of who we aspire to be.No one can really know if extraterrestrials will ever encounter the Golden Records traveling 38,000 miles per hour and currently 11.7 billion miles from home, but what we do know is that the original committee behind the idea of this record worked tirelessly to make a comprehensive testament to what human life on Earth is like in its best state. To this beautiful idea, we had to make a beautiful package.Both Voyager spacecraft were launched in 1977 and we could've reflected the vintage aspects of technology at the time, the 1970s, the feathered hair, the nomenclature of nascent digital technology, or the Star Wars fascinated tone of the era, but the original project is much more than this, conceptually and intellectually.In a way, it is connected to no period, since the originals will be floating through space - theoretically - for all time. It was imperative that we reflect this timelessness in the design. In fact, on the original records in space, it is hand-etched in the takeout grooves, “To the makers of music – all worlds, all times." Capturing this sense of timelessness, gravitas, and beauty in the original concept was the driving force.

There’s also a book containing images of the interstellar messages. Can you tell us a little bit about the book and how it came to fruition?Lawrence Azerrad: The book was at the heart of the project. It contains much of the story and material supporting the record that many have not had access to. The images encoded on the original voyager record had never been scanned or reproduced at the quality we used for this project. We searched the archives at NASA’s Jet Propulsion Laboratory (JPL), scanning their master slides. We were lucky enough to discover an even better set of slides belonging to one of the original committee members.These images, that are encoded as data in the grooves of the records tell a story beginning with the basis of our mathematical systems, our biology, the human family structure, the human life cycle, a spectrum of cultures from around the world, our natural world, an evolution of our planet, the animal world, urban, rural, and tribal life of the day. Humans eating, drinking, playing music, dancing, and space exploration - essentially a visual essay of life on Earth.This was also the first time the images that went out on Voyager, had been paired with the images that had been sent back. Since the digitally-transmitted photographs from Voyager are 40 years old, some as digital files barely exceeding 40-50 kilobytes, we had to go to great lengths to prepare these images for press at the size that we used them, and at the quality that we needed.

What was the most challenging part of this project?Lawrence Azerrad: There were challenges at every stage of production on the project. On the cover of the original case that housed the records in space is a diagram and it explains to extraterrestrials how to play the record inside and where it came from. We had to recreate in vector the Lomborg diagram – named for John Lomborg who created it since it was originally a hand-drawn mechanical. Part of the diagram is the Pulsar Map representing space and time, and the position of the space probe's origin in relation to the sun. Each tiny groove on the lines of the pulsar map represents distances of billions of miles.Reproducing this as perfectly as possible was imperative, printing this in black ink on gold foil, enough so that the thinness of the lines still represented an accurate representation of the diagram, but were thick enough to press onto foil was a challenge. We also printed a poster on black paper with a gold foil representation of the Lomborg diagram along with a DJ’s slipmat that showed the trajectory of the Voyager probes through our Solar System and the years they passed by each of our neighboring planets.What was the most rewarding part of this project?Lawrence Azerrad: The outpouring of support and enthusiasm from the public. As a designer, in all the work that I do, it's my goal to make a positive impact on the lives of others through design. The reflection of joy and appreciation from people who purchased the record, in their comments online and elsewhere, was sincerely gratifying.When we took the project public, we were concerned that not enough people would be interested in it to cover the cost of production. We were overwhelmed and inspired by the immense response. That the press carried the story of the record so broadly – NBC’s Today Show, The Wall Street Journal, New York Times, Rolling Stone, 60 Minutes - reflected that the message of the project was indeed meaningful to people.Lastly, being recognized by our professional colleagues and peers, by bestowing us with the 2018 Grammy Award for Best Special Package and Boxed Set was deeply gratifying. There are a lot of wonderful packages created every year, and this honor from the industry was deeply appreciated.

If you could pick one aspect of the finished design that you like the most or feel especially proud of, what would it be and why?Lawrence Azerrad: I’ve been in the business long enough to know that projects change. Especially long projects. This can be OK sometimes. Goals evolve, needs and priorities shift, and circumstances of all kinds can alter the outcome of a project. How this is managed is a core challenge to every designer today.From the start, we had a certain look and feel for the package in mind. Something sacred, something valuable and beautiful that provided a lens to explore the wonder of the Voyager record. I’m most proud of the fact that in the end, this came out largely intact.To pick one particular element is challenging because the impact of the project really is manifested in all of the elements coming together in one comprehensive suite. Through all of these elements coming together, that they came so close to our original aspiration is somewhat of a design goal met and I'm proud of this.

Check Out The Beautiful Packaging for Clicquot Arrow