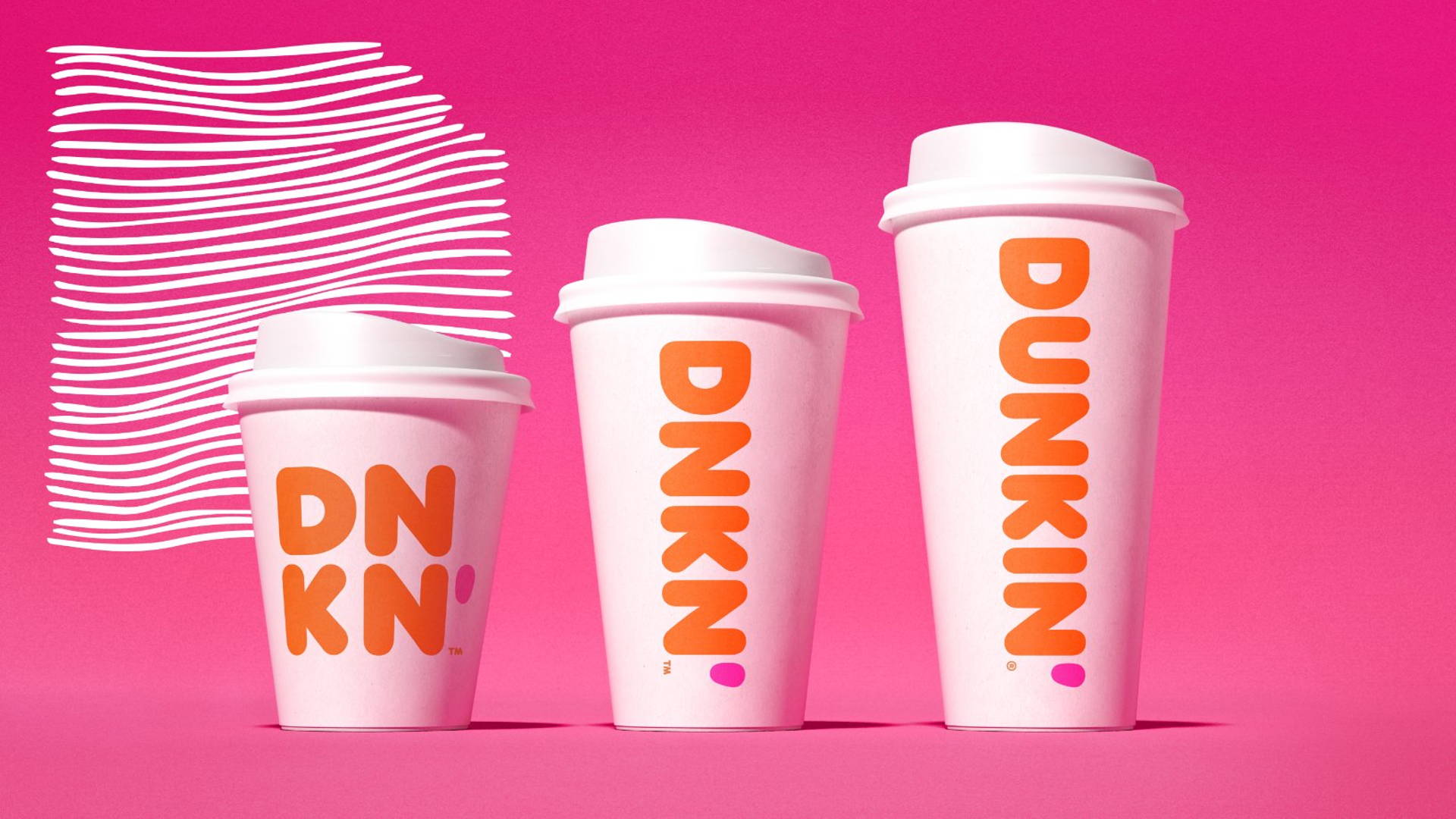 That Dunkin’ Redesign is More In-Depth Than You Thought

When Dunkin’ (née Dunkin’ Donuts) arrived in Santa Monica, California in 2014, I was excited, to say the least.

The chain holds a special place in my heart, having come from the east coast. I’m not the only one, either—Dunkin’ had a line down the block the day it opened its doors. According to KTLA, the first customer showed up around 9:30 pm on Sunday evening in anticipation of the store’s Tuesday opening. It’s undeniable: the love for Dunkin’ runs deep. 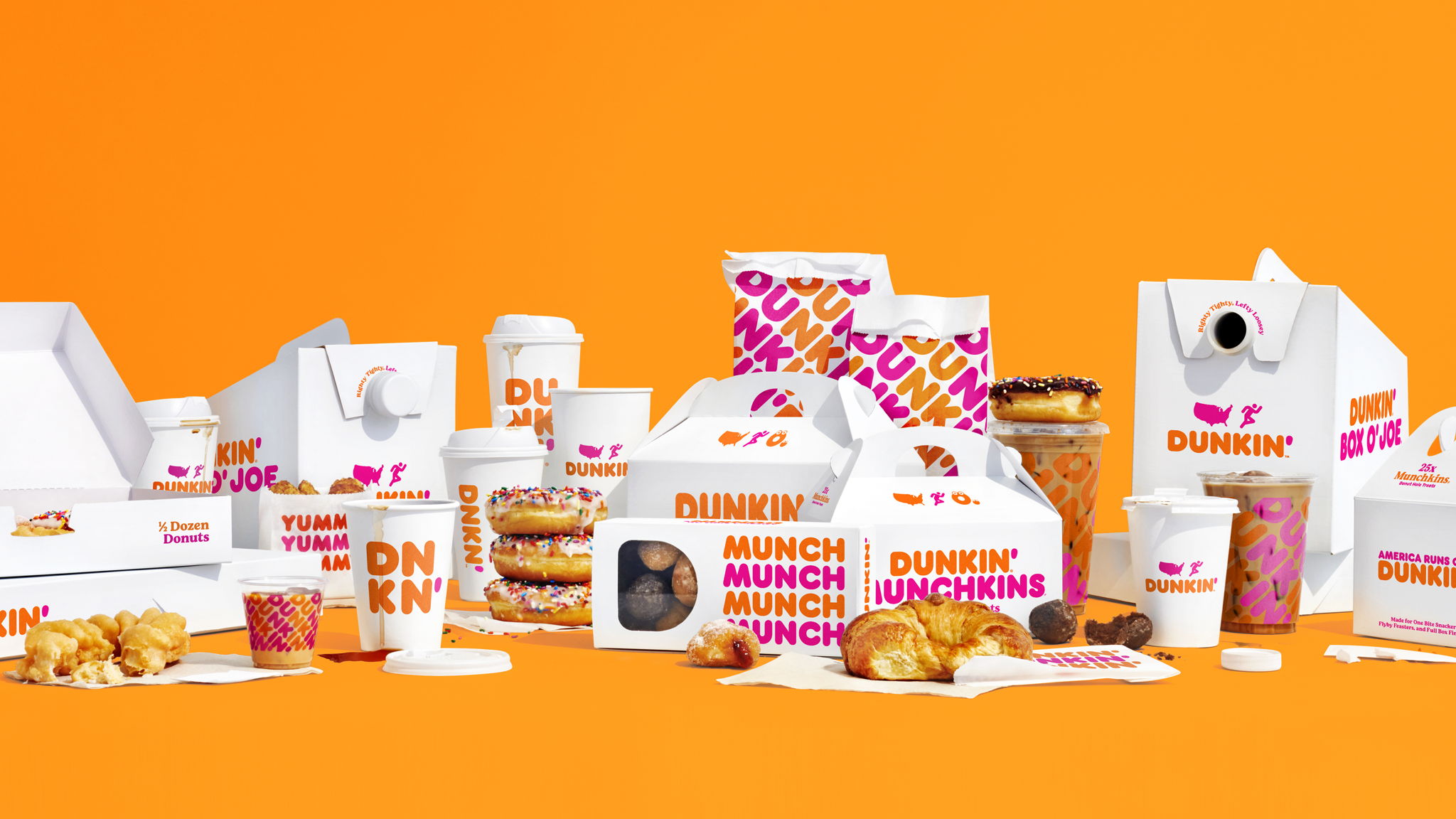 So when Dunkin’ approached Jones Knowles Ritchie to make the branding as cared for as people genuinely feel about it, the team knew they had an enormous task ahead of them. 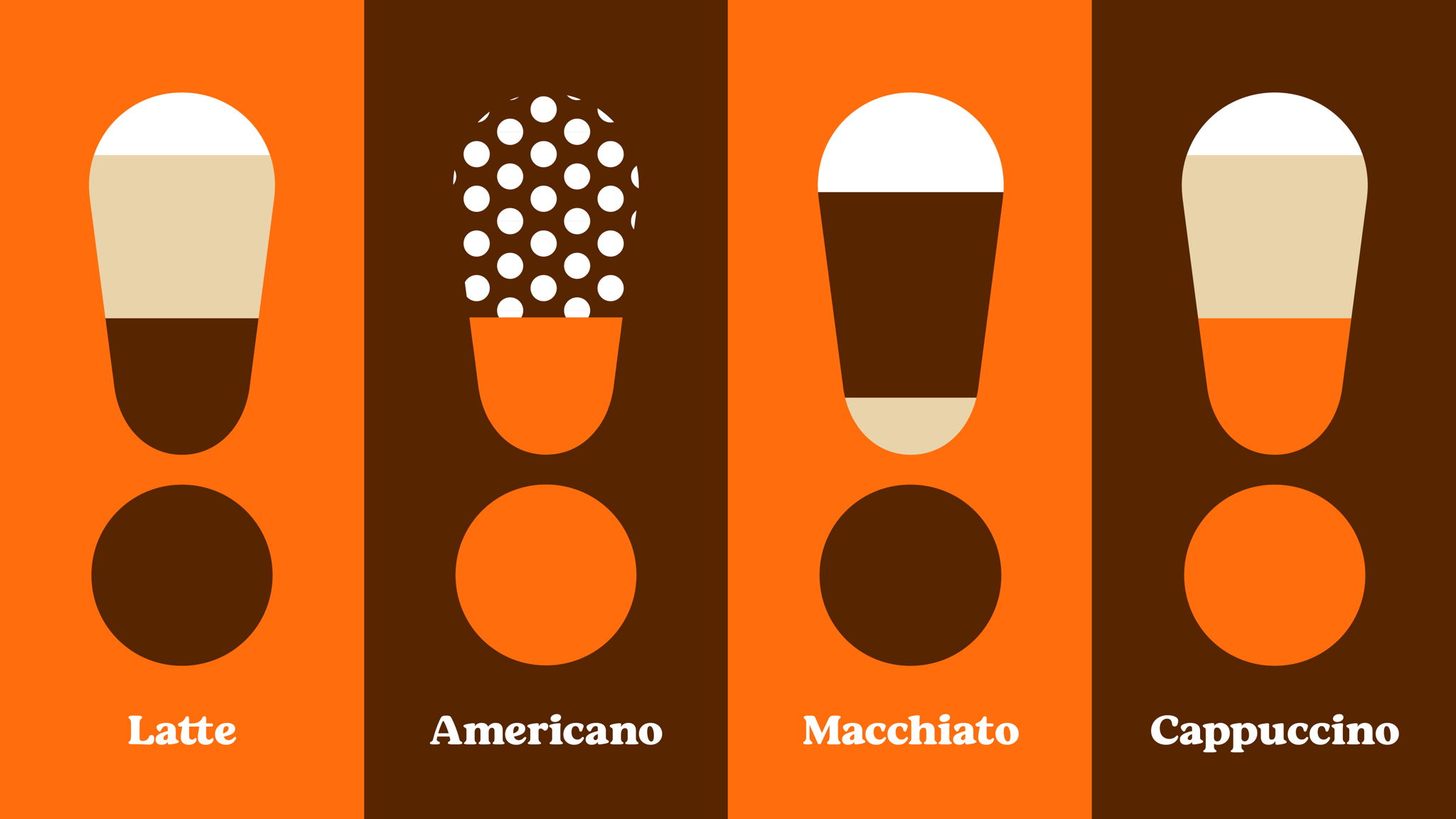 The brand wanted to focus on its other offerings like coffee and their latest Espresso beverages. Easy enough, right? At first glance, the redesign looks like they dropped the “Donuts” and called it a day, but it’s significantly more complicated than that—it was about finding the heart of what they stand for.

What JKR discovered is that typography is key to the brand. Unlike an apple which can represent technology or a domino which represents pizza, “Dunkin’” is a verb, and considerably more difficult to express in one icon. Since Dunkin’ can stand for a lot of different things (coffee, donuts, breakfast sandwiches, and more), it made sense to dig into the typeface. 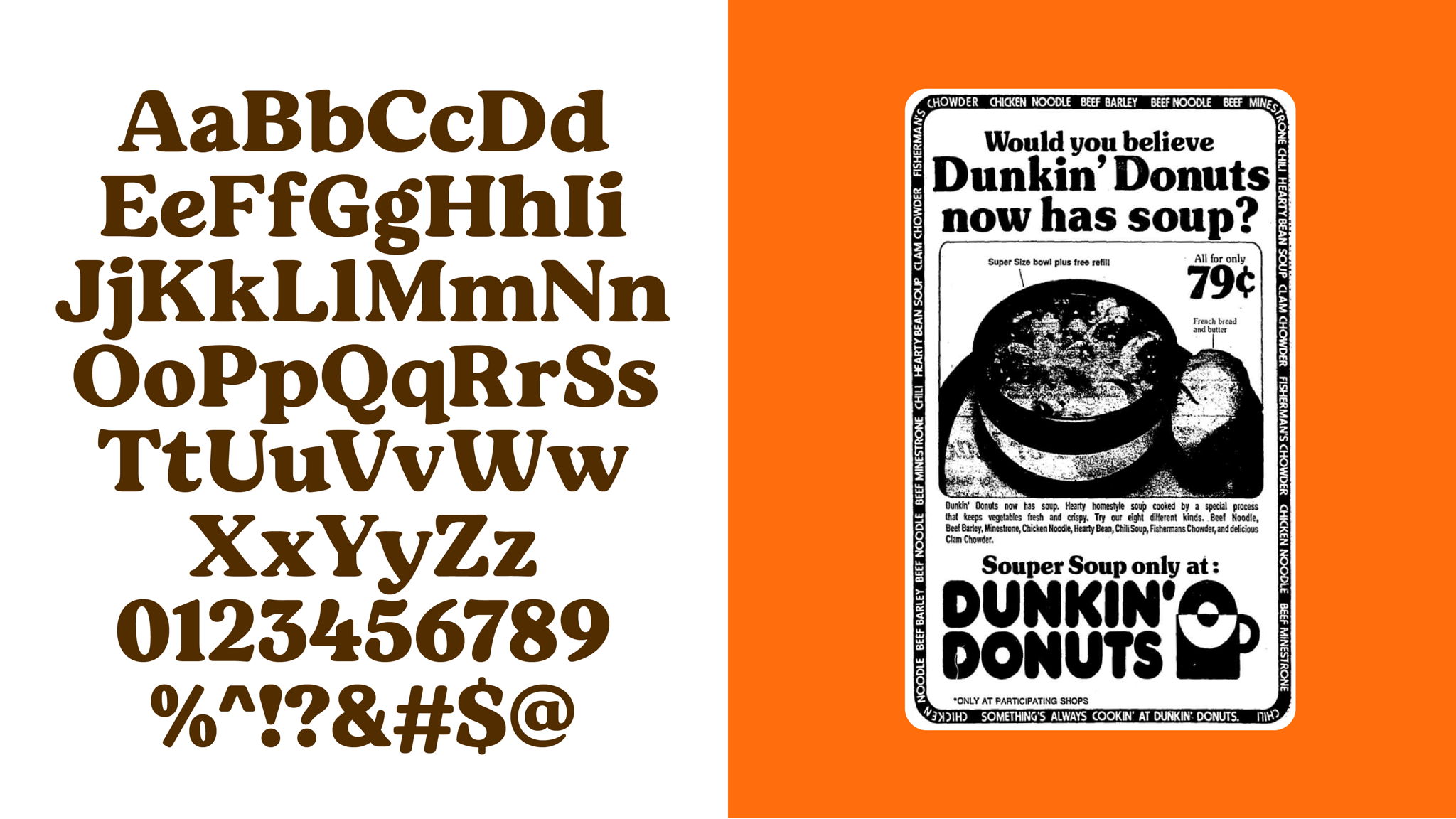 “The tricky thing for us was how to communicate what is iconically Dunkin’ Donuts if you don't have the donuts anymore,” confessed Tosh. “So first thing was to redraw the Frankfurter typeface because it only existed in uppercase and it was hard to use.” 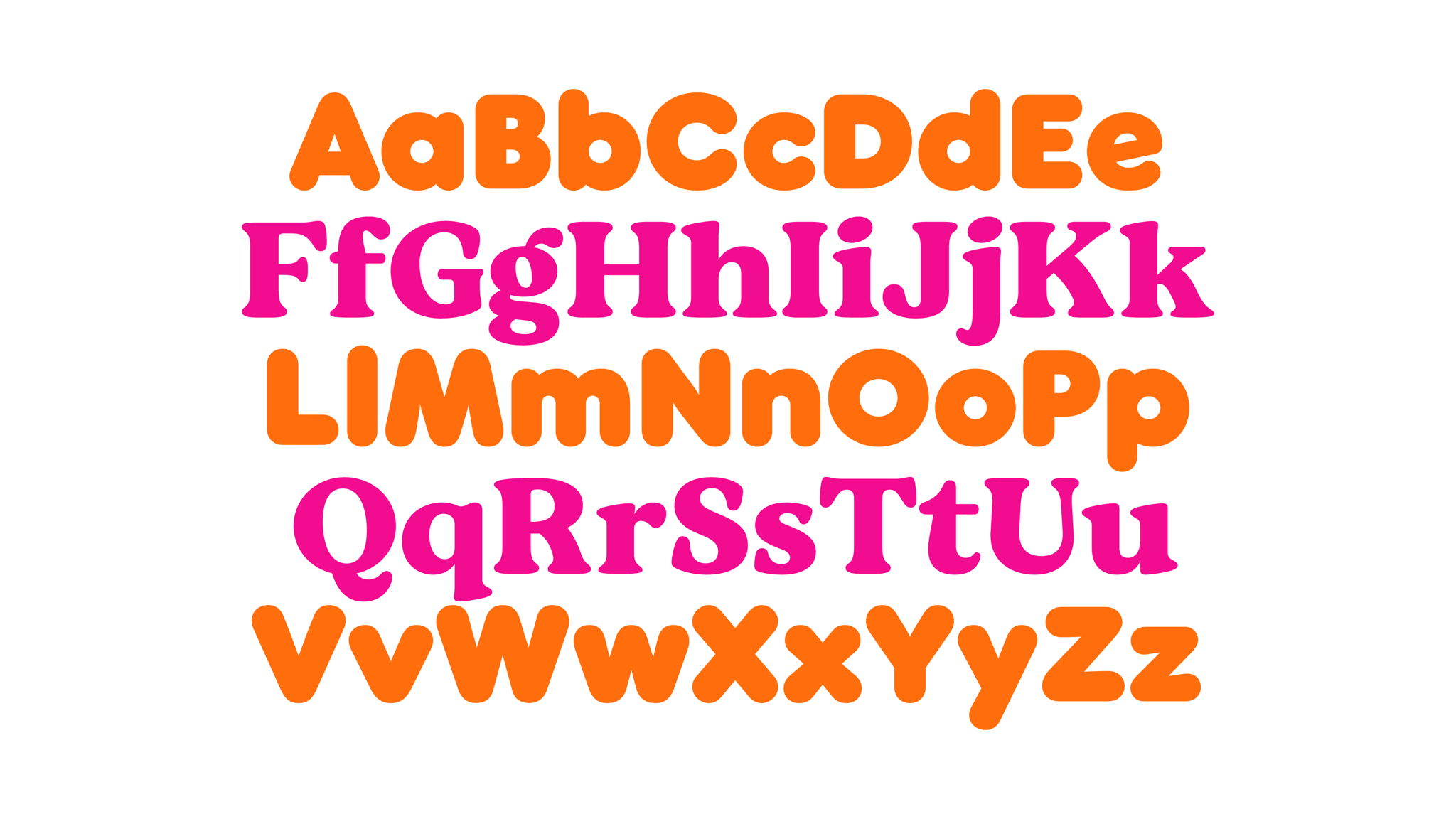 The sausage-inspired Frankfurter font by Alan Meeks became part of the branding in 1973, intrinsic to the history and heritage of the much-loved coffee shop. JKR worked with Colophon Foundry in the UK to revamp it and create a series of weights, both upper- and lowercase. They also teamed up with Colophon to create a new typeface based on Frankfurter, Dunkin’ Sans. It consists of a series of weights and a system to incorporate the font into all of the brand’s communications. 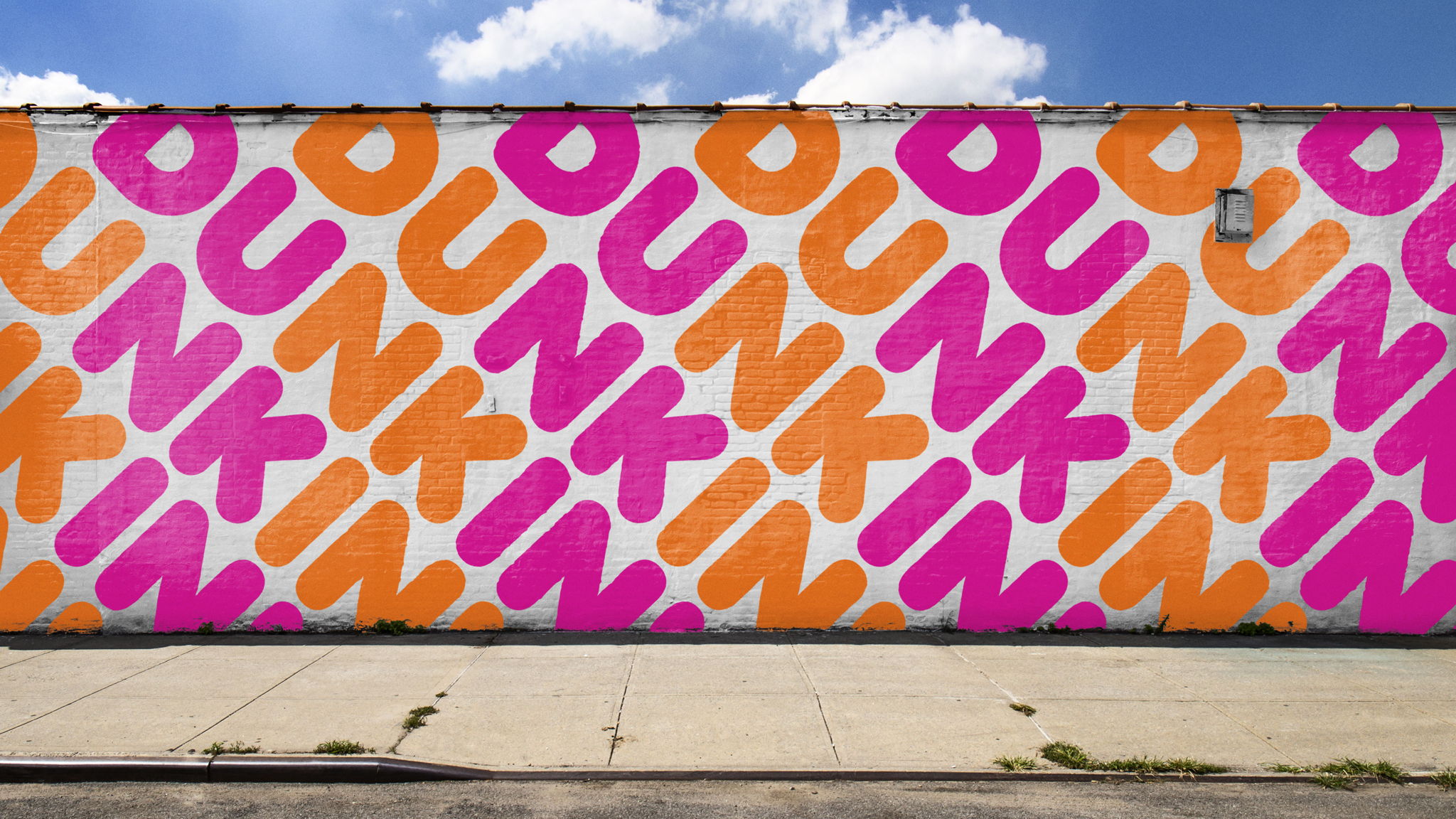 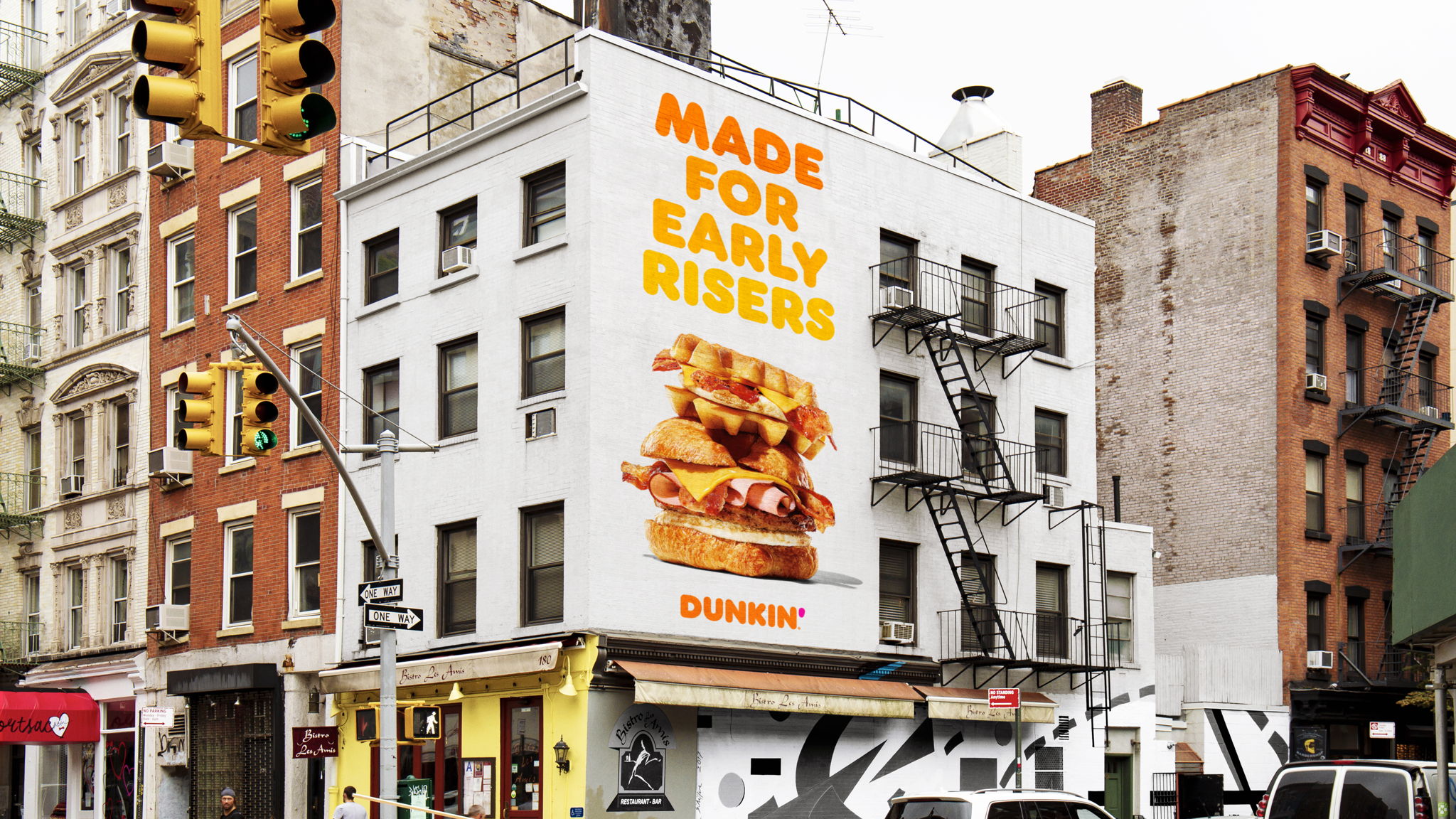 “Then, of course, we made the mark,” Tosh added. “We recrafted the apostrophe and then used the iconic colorway of pink and orange: the apostrophe becomes pink, and the ‘Dunkin’’ is still the orange.”

Dunkin’ is also iconic with their symbols—maybe you’ve even seen the map of the contiguous United States or the running man set in squares to indicate “America runs on Dunkin’.”

“We just took that and streamlined it in a Paul Rand kind of way to rethink it,” Tosh explained. Rand altered the way advertising worked after the Depression, making design an integral part of good business while also creating memorable yet strikingly simple logos for brands like IBM, UPS, and ABC. 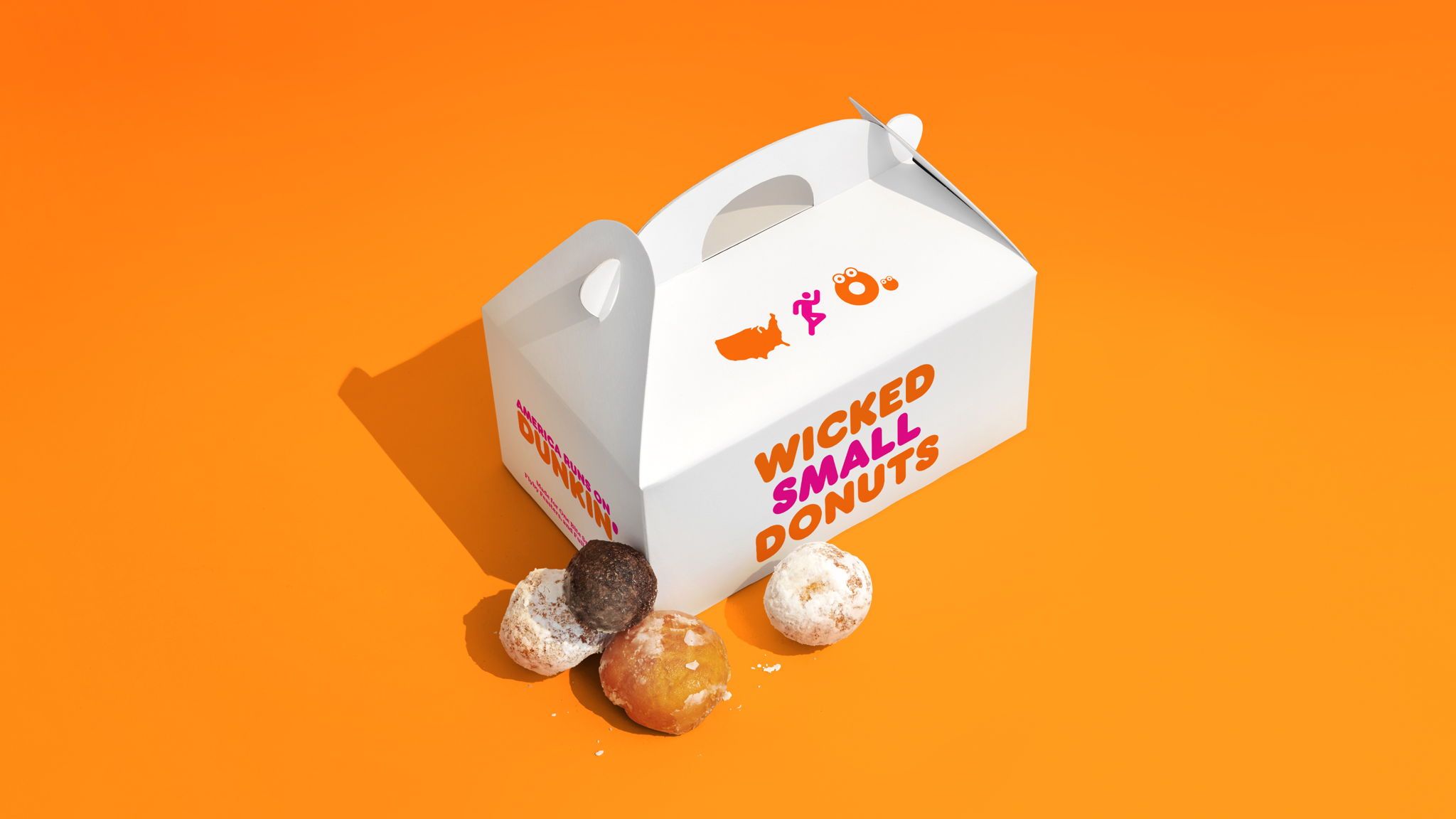 “We have the America map, the running man, and then ‘Dunkin’, and we can replace that last part with all sorts of things,” Tosh said. “It creates a system that Americans can run on coffee or on Munchkins, all through the lens of Dunkin’.”

As JKR rebranded Dunkin’ (news which came in September), they simultaneously worked on the restaurant’s most recent addition: espresso. Every Dunkin’ has a new, high-quality espresso machine, so the goal was to drum up excitement about something new while keeping the brand’s values at the forefront of the design.

The inspiration for Dunkin’s espresso line comes from the portafilter (the part of the espresso machine which holds the coffee grounds). The team looked at it and saw an exclamation point—which is a perfect tie-in to the typography-driven brand, while also expressing something bold and exciting. The color palette incorporates orange which further makes the espresso stand out. 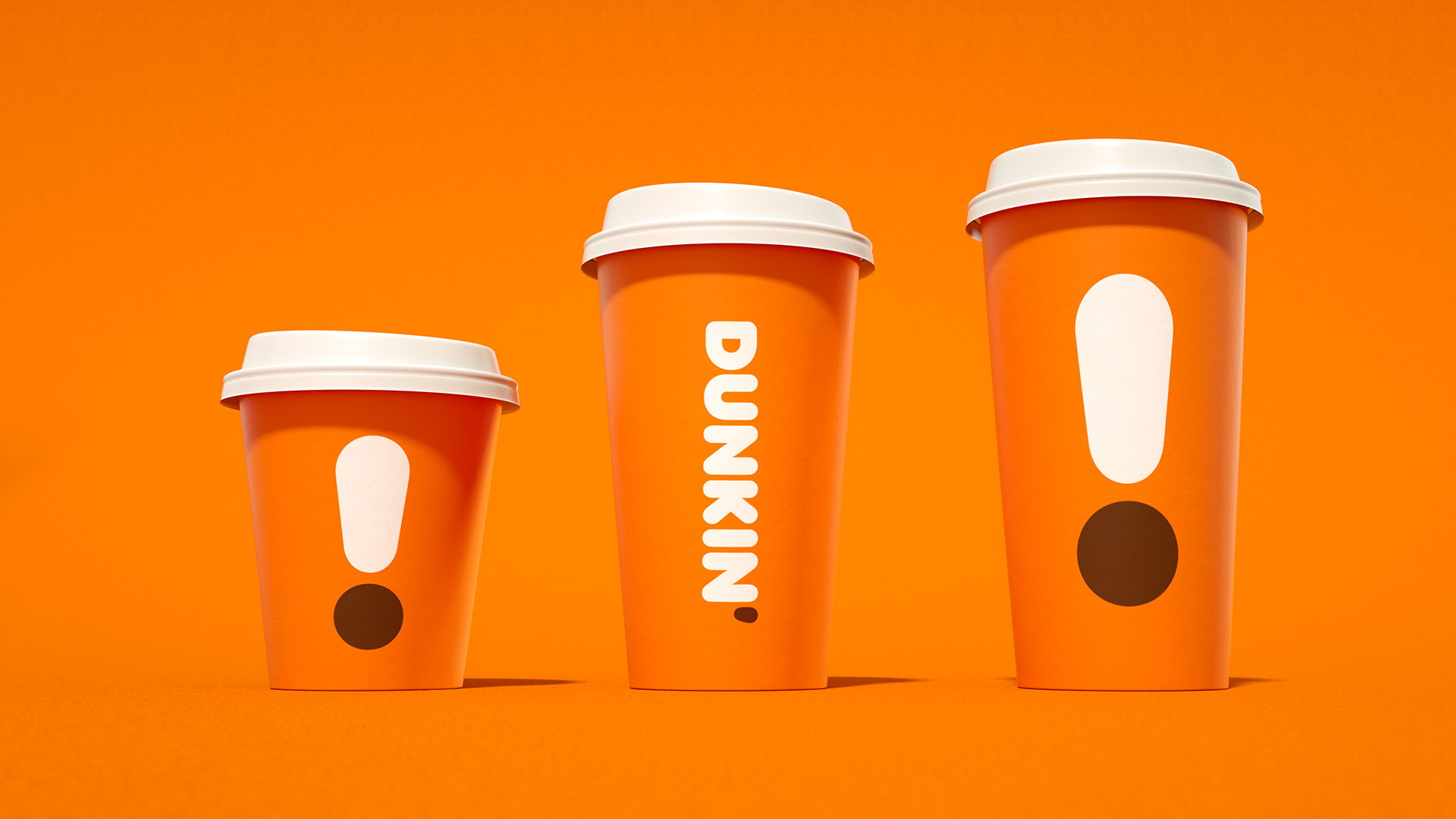 As much as America loves Dunkin’, JKR has put even more love into the brand. The rebrand was more than ditching a word—it was sifting through old ads, examining the client’s extensive collection of merch (think: thermoses, pins, hats, and more from the depths of eBay), and digging into a history which dates back to 1950.

“We've closed the gap from the what people feel in their hearts and see in their minds, and what they will now engage within the world has the same level of love and quality,” Tosh mentioned. “It involved a ton of nerdy design work that people don't really see; instead, it just feels right, and that's the magic.” 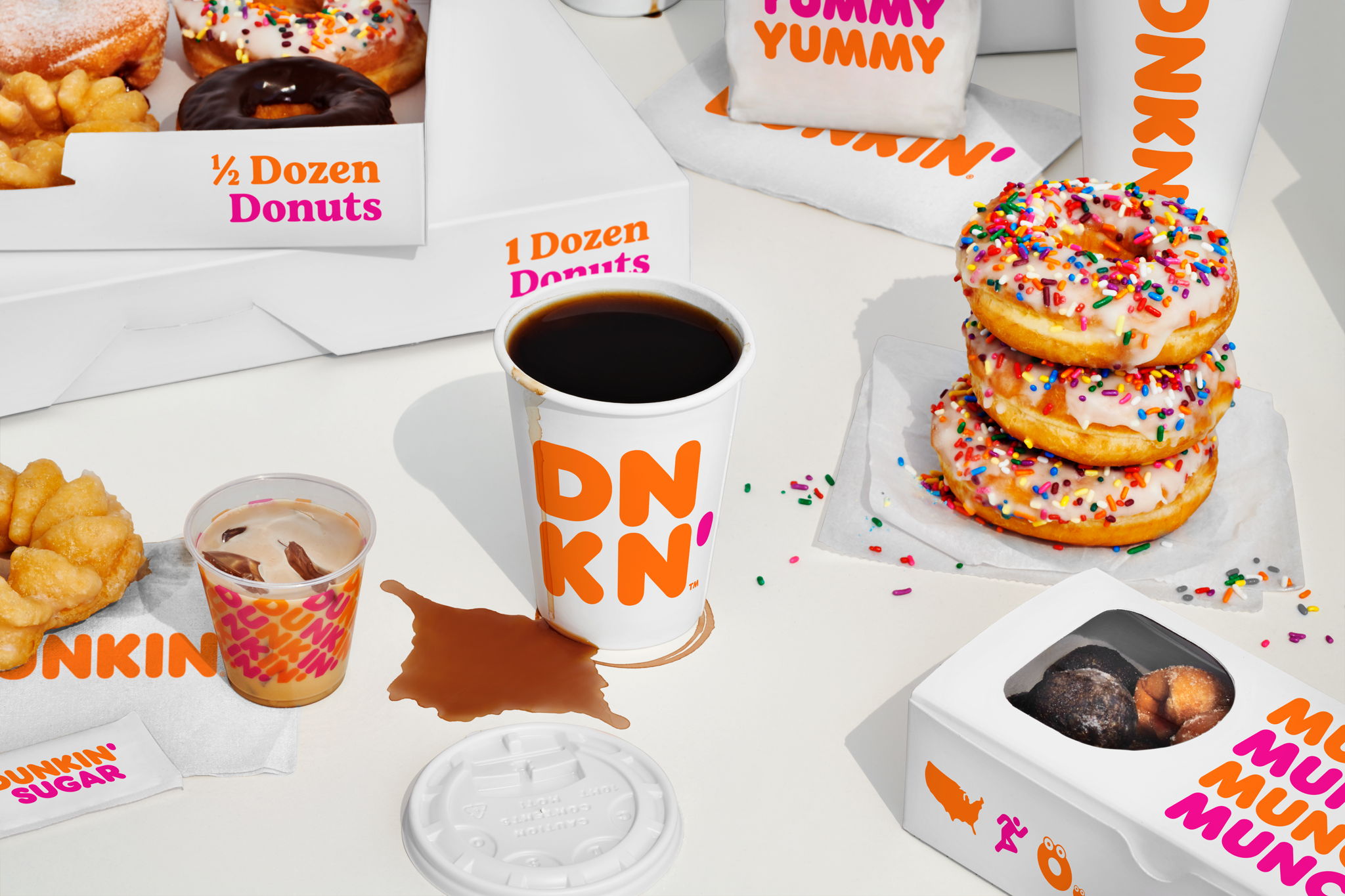 Leave Eager About The Future Of Brands & Sustainability