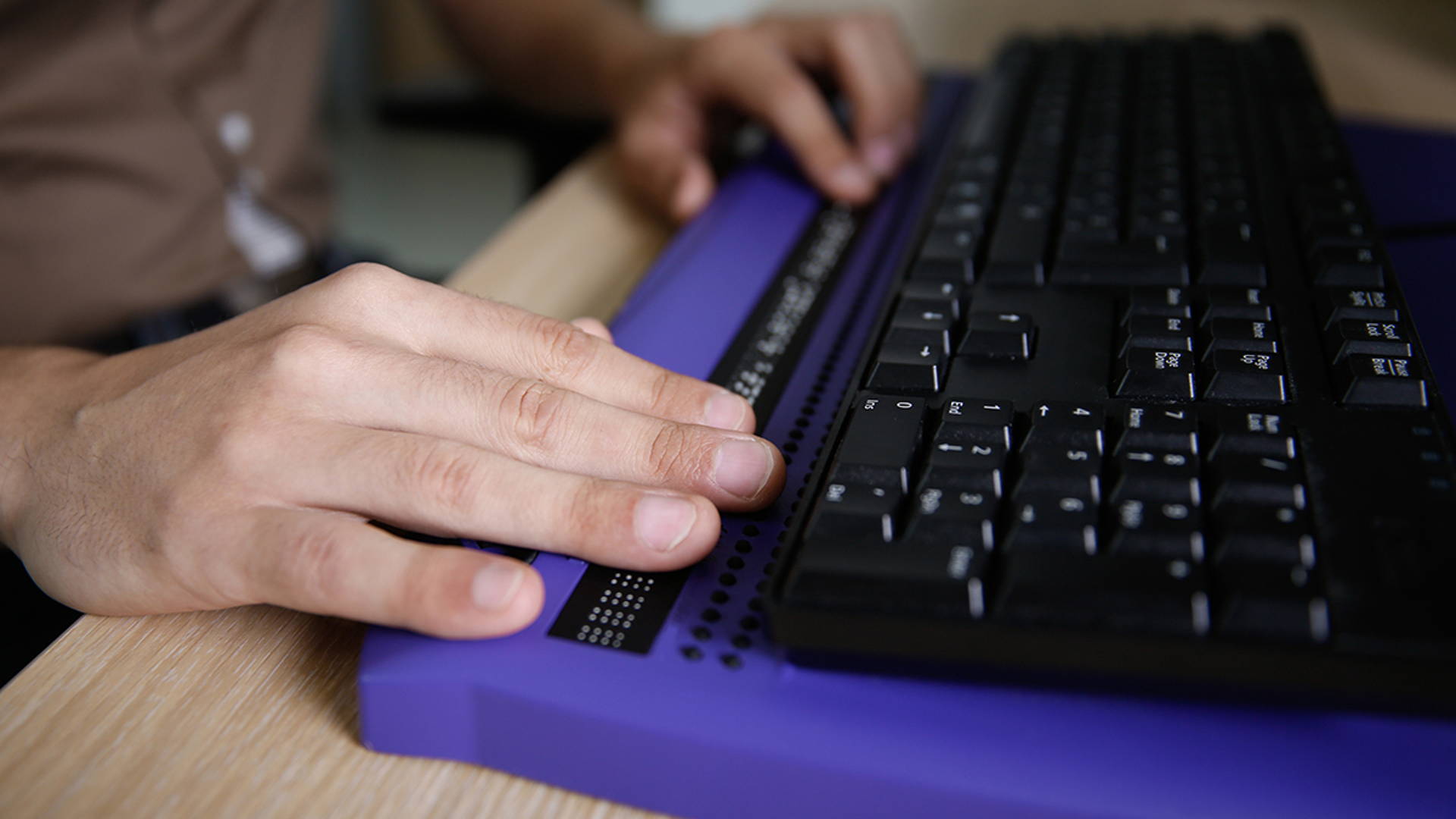 Designing for People with Disabilities

You’re blind. Legally speaking. Yes, you can make out basic forms and colors. You can even read a few lines of the newspaper in the proper light. But walking is a challenge. Finding your way to the corner deli is always a bit scary given the blind spots in your line of sight. You bump into more people than you care to admit.

At home, you have a computer but the shapes on the screen blend together very easily. You find yourself squinting and getting lost frequently on a page. Websites are an even bigger issue. The layouts are often complicated, photographs are rarely labeled properly, and it’s nearly impossible to find any clear navigation prompts. Text is often too small, images and colors clash, and there’s sadly no shortage of bad design all over the internet.

Travel sites are the worst. Inputting the itinerary info is a total puzzle and deciphering the vast array of pop-up windows that follow is simply not an option. You’ll just ask a friend to help with that.

For most people, the ever-expanding reach of the internet is a beautiful convenience. For you, it’s anything but. The growth of this new world leaves you feeling frustrated and marginalized, particularly as businesses and government organizations now require forms be downloaded off the website, appointments booked online, and customer service to be reached through virtual chat windows.

This is the challenging online world that people with disabilities deal with every single day. In mankind’s rush to design, create, and innovate, they have left behind millions of people that cannot navigate at the demanded speed the world now requires. ADA compliance has mandated everything from ramps to listening devices to braille in the physical world, but in the online realm, no safeguards exist.

Early in my career, I too was ignorant to the needs of people with disabilities in my design work. Who was thinking about that? Building a website that was beautiful, functional, and responsive was enough of a challenge. But having to also consider compliance issues for all people? Forget it. The client was happy, I was happy, and the project was done. Period.

And then one day I encountered a man living with blindness. I saw firsthand the challenges a person like he dealt with every day on the internet. I learned how much he relied on a website being properly built; how important the clear implementation of color schemes, layouts, alt tags, and text structure were to his comprehension. He had a screen reader built into his computer which read web code to him when necessary. This meant that when the code was poor, the screen reader was useless. The internet was a minefield of issues for this man and people like him.

I spent the next several years studying the subject of cognitive design and how designers can bring full online accessibility to people with disabilities. I was shocked at the lack of attention regarding this issue, particularly given the sheer numbers of people that struggle every day with accessibility problems on the web. For example, a 2012 report by the U.S. Census Bureau estimated over 8 million people suffer from vision issues, 7.6 million people suffered from hearing problems, 15.5 million people could not perform instrumental activities such as housework, using the phone, cooking, etc, and 19.9 million people suffered from the inability to grasp ordinary items such as a pencil or a glass. Those figures represented a potential 50 million people that could be suffering from online accessibility problems, and these numbers would likely rise as Baby Boomers retire. From both a business and moral standpoint, something had to be done.

Some organizations had made inroads on this issue. The World Wide Web Consortium (W3C), which is an international body devoted towards online compliance and standards, promoted full web accessibility as a keystone of its agenda. The organization created a comprehensive reference list for all designers to adhere to regarding accessible website design, including standards around visual elements, audio, links, downloadable files, and more. Other organizations, such as the US Business Leadership Network (USBLN), had readjusted their core mission to deal with, not only traditional issues of discrimination of people with disabilities in the workplace and within public spaces, but now also towards the promotion of full online accessibility.

Some momentum was created. ADA website compliancy test sites started to emerge online, such as the ones found at 508checker.com and the WAVE Web Accessibility Evaluation Tool at webaim.org (both of which still function presently). The subject was finally getting some attention, but still not enough.

Several years ago, I began working as Creative Director with CityMouse, Inc., a company founded by John Kirkwood towards the mission of bringing full accessibility and ADA compliance to the online world. Together, we developed a comprehensive framework around how a website should properly be built for all people.

For us, true accessibility was about keeping things simple. Simple layouts and information, clearly defined images and tags, and a well designed interface. Code had to be built with screen readers in mind, day and night modes were beneficial (white and black swappable backgrounds), breadcrumbs should lead users back from where they came, straightforward menus, consistently defined titles, and no novelty scripts or animations simply for the sake of them. Unnecessarily complicated design is bad design, and a skilled designer should strive to create something that is simple yet sophisticated.

The benefit of this compliant-friendly framework has proven to be tangible in many ways. Full accessibility has helped, not only people with disabilities, but also the elderly, the distracted, and the mobile user. Cognitively designed websites tend to be simpler and prettier to look at. And, as a designer myself, working under these parameters has greatly advanced the quality of my own work. When one keeps things simple, one has nowhere to hide.

Over the last couple of years, our team has brought this conversation from committees to conferences to South By Southwest (SXSW) to even proudly marching in New York City’s first ever Disability Pride Parade. The true encouragement for me wasn’t that people don’t care about this issue, but rather that they were unaware it even existed. That has begun to change drastically.

Companies like IBM are now giving web accessibility a serious look, even dramatically reorganizing their design departments to make cognitive design a greater priority. The City of New York has also begun giving many of their own online experiences a second look to ensure full accessibility.

In 2006, the Target Corporation (of retail notoriety) was sued by the National Federation of the Blind (NFB) for not providing full accessibility to their online store. Among the NFB’s complaints were a lack of alt tags, an inaccessible checkout experience, inaccessible location maps, and several missing navigation headers. Eventually, Target settled with the NFB, paying more than $6 million in damages. A hefty penalty for sure, and an added warning to companies everywhere.

Yet full online accessibility should not be a threat but rather an opportunity. It is a chance to advance clearer, more cognitive, and prettier design into the world. Businesses can look more attractive, while users obtain information more easily. Everybody wins.

For a designer like myself, it is a chance to do better work. Whether it’s through projects at CityMouse Inc. or even independently with my business at Future Boy Design, all work, big or small, must be done with full accessibility at the helm. Not only for myself and my clients, but for the many people who struggle everyday in the online world.

Justin Negard is a freelance designer under the business name, Future Boy Design, and also serves as Creative Director at CityMouse, Inc. His work has been awarded and recognized by the International Design Awards, American Photography, Latin American Fotografia, the Los Diez exhibition, and Westchester Magazine among others. In 2017, Vice News and The Creators Project listed Negard as “one of the best Latin American artists working today.” In 2016, Negard, through CityMouse, Inc., presented at the South By South West (SXSW) Festival in Austin, TX on the subject of “Cognitive Design.” Justin Negard is the author of “On Design”, a book on graphic design principles and business strategies, and “BOGOTÁ”, a photography & design book on Colombia’s capital city. Additionally, his work has been published on Vice.com, The Creators Project, Bloomberg TV, American Photography, The Art Directors Club, Westchester Magazine, The Daily Voice, The Journal News, Edible Magazine, Refinery 29, among many others.

The Best of the Dieline

How Pastafarian takes a Totally New Perspective on Traditional Pasta