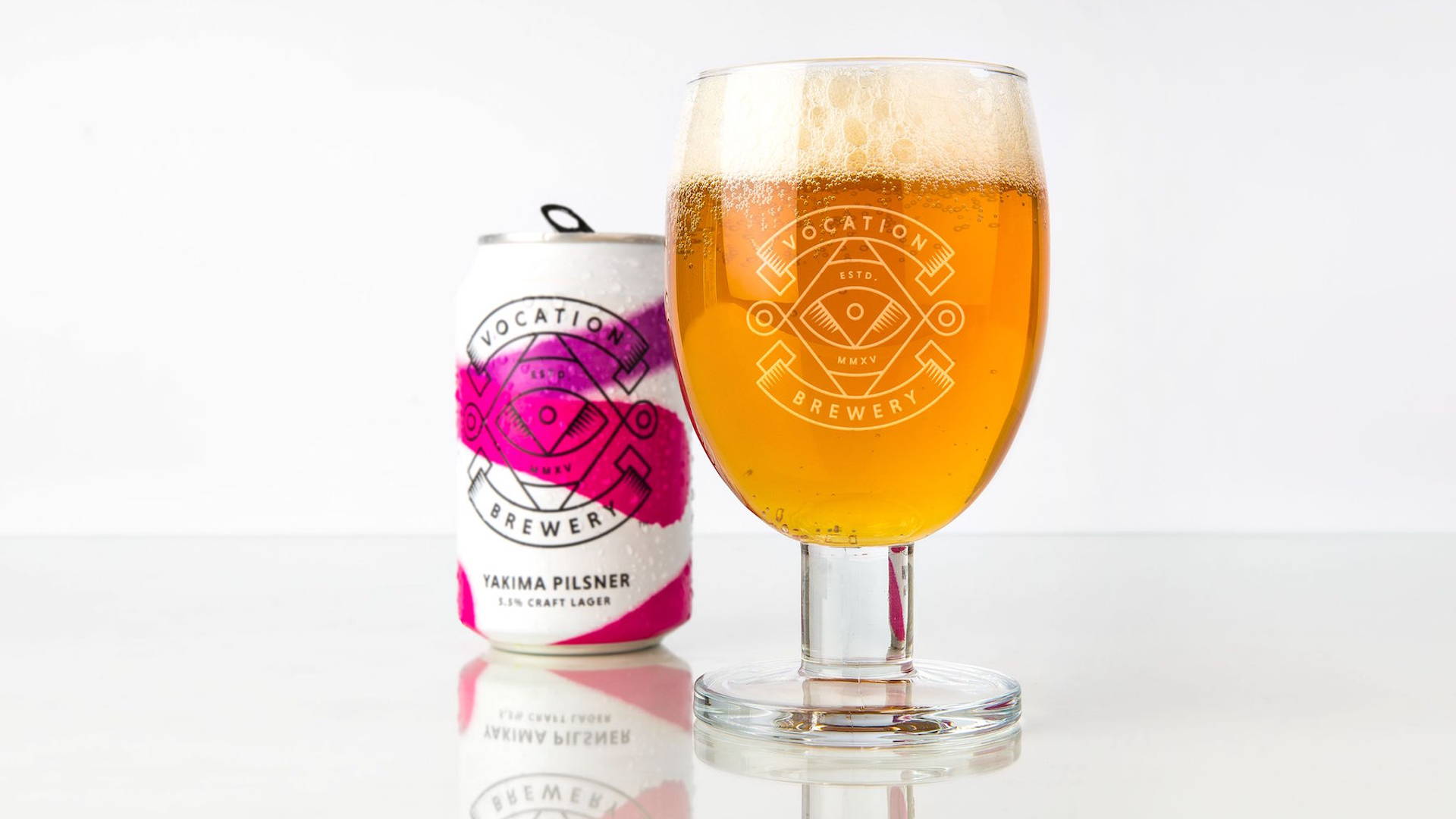 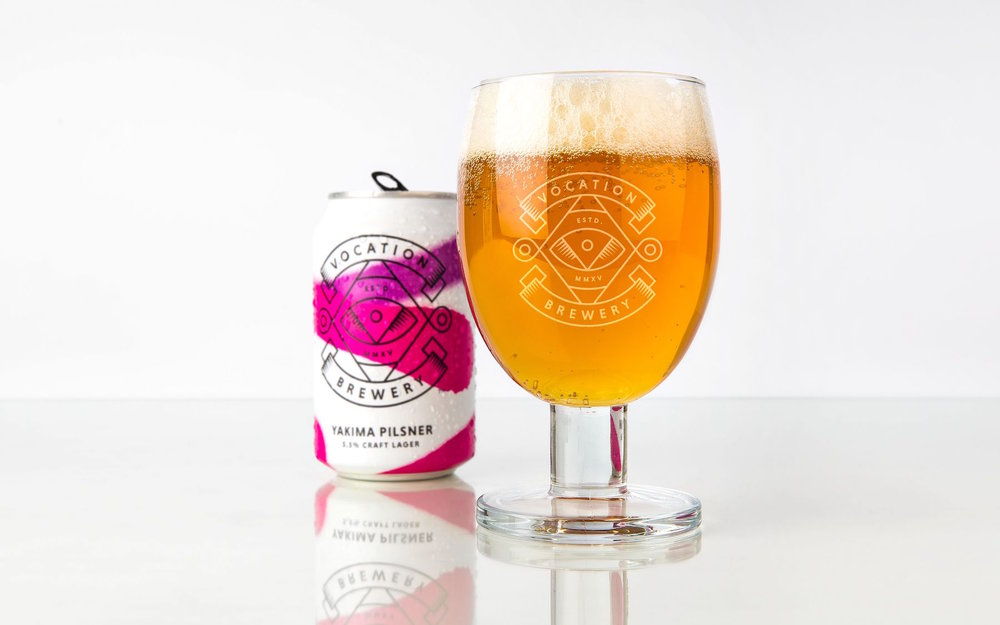 This is certainly a beer that is made to stand out. Although already an established brewery, Vocation Brewery released a new range of craft lagers that needed to express the creativity involved in these fresh brews. We asked the team behind the design, Robot Food, a few questions about this project to learn more about standing out in a saturated market, creating brand confidence, following gut feelings in design, and more.

Robot Food: Usually we would go through an extensive process involving audits and brand workshops through to implementation and production, but with Vocation it was different.

In this case—because we were the target market—our client John was happy to let us dictate direction with minimal input on his part. He had some ideas around the name, but after our initial chat and hearing his compelling story we challenged the idea and used the story to form the basis of the brand positioning, naming and design. 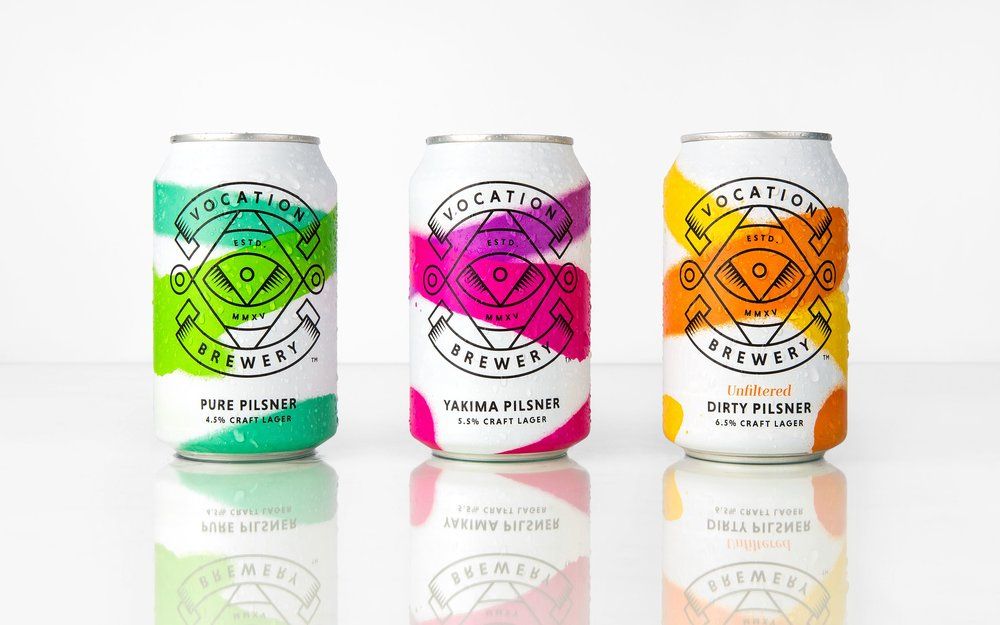 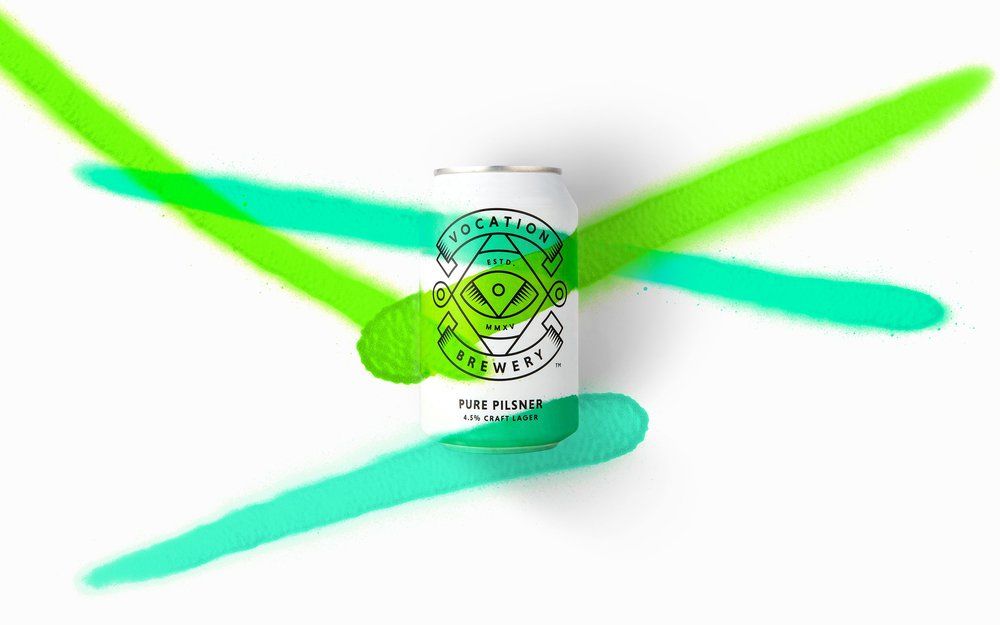 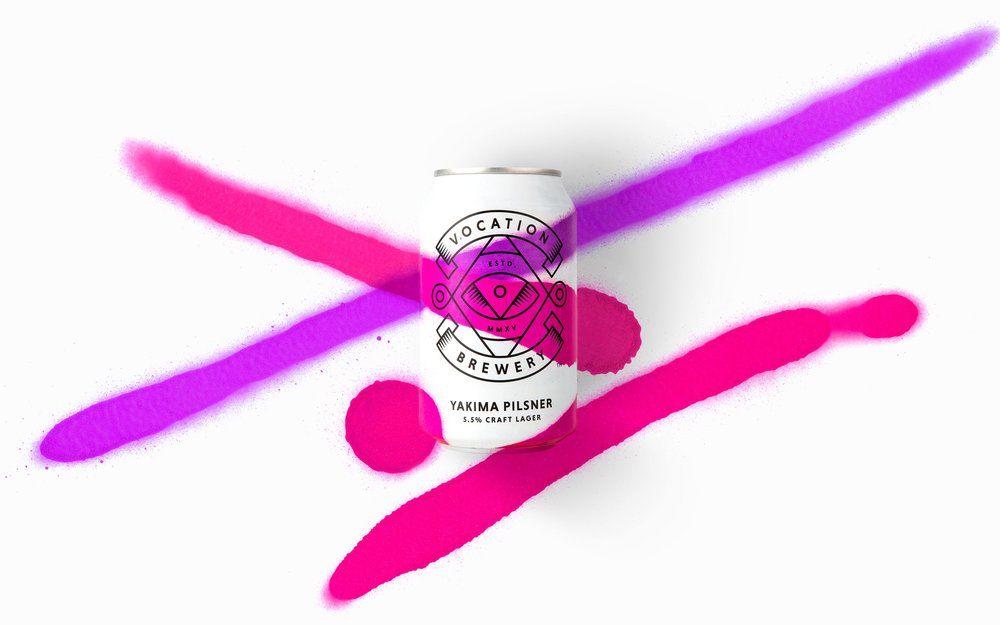 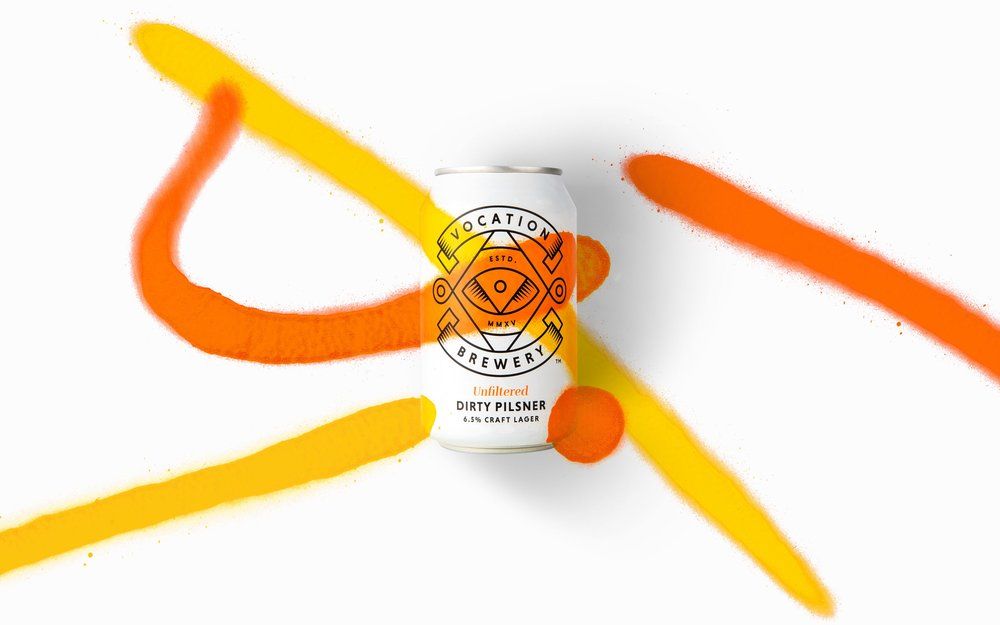 What was one of the biggest goals you set out to achieve with Vocation Brewery packaging and how did you accomplish it?

Robot Food: This was our first venture into the BWS category and we had complete creative control over the project, so it was an ideal opportunity to create an amazing piece of work for our portfolio.

The growth in craft beer is largely down to young, professional creative types, so we knew that commercial success could be delivered through a design that was highly creative. If we made something that we wanted to drink, then we knew we’d smash the brief.

Little did we know how fast the craft revolution would spread. Now, two years down the line, Vocation is sold everywhere from the best independent bottle shops, bars and restaurants to big supermarket chains like Tesco, Asda and The Co-Op. 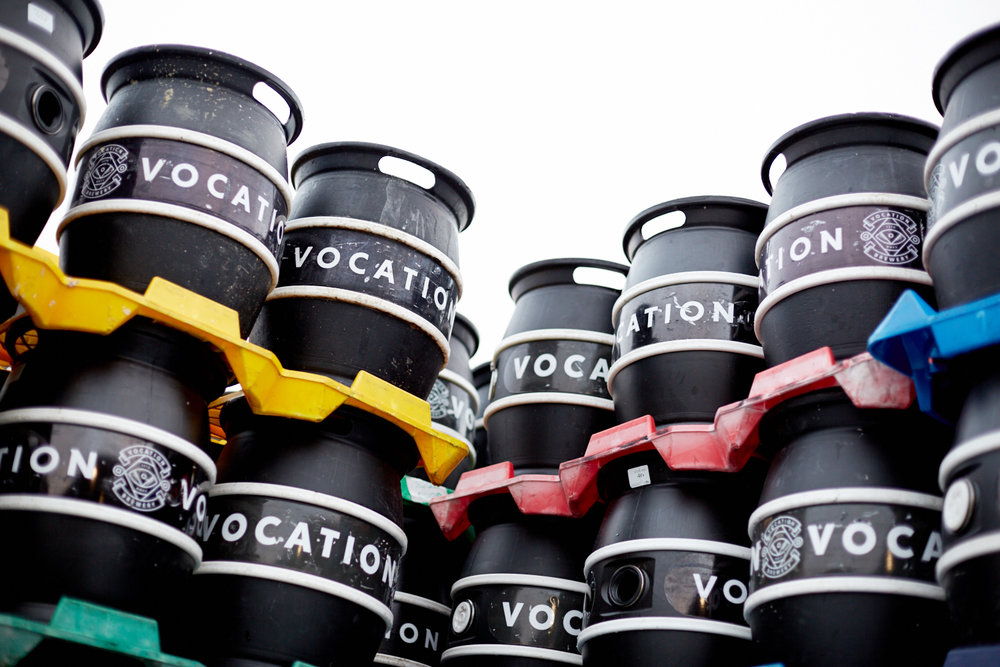 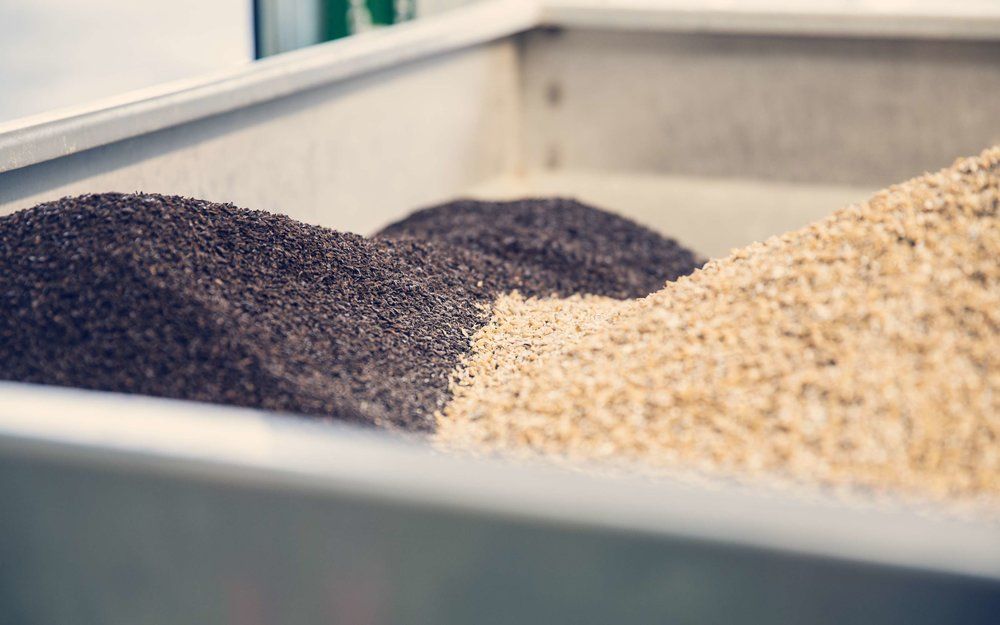 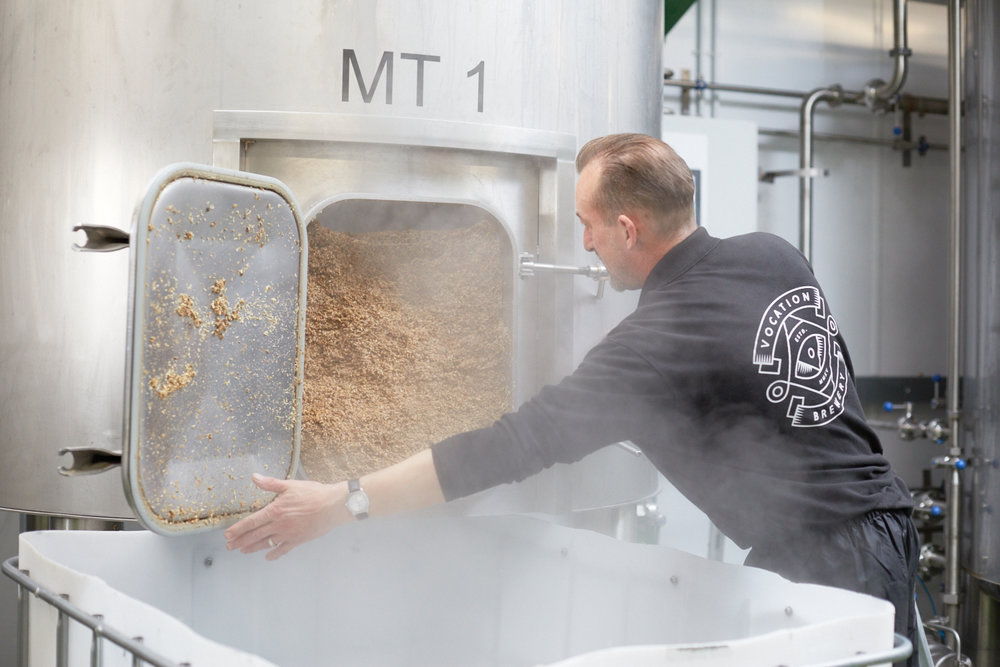 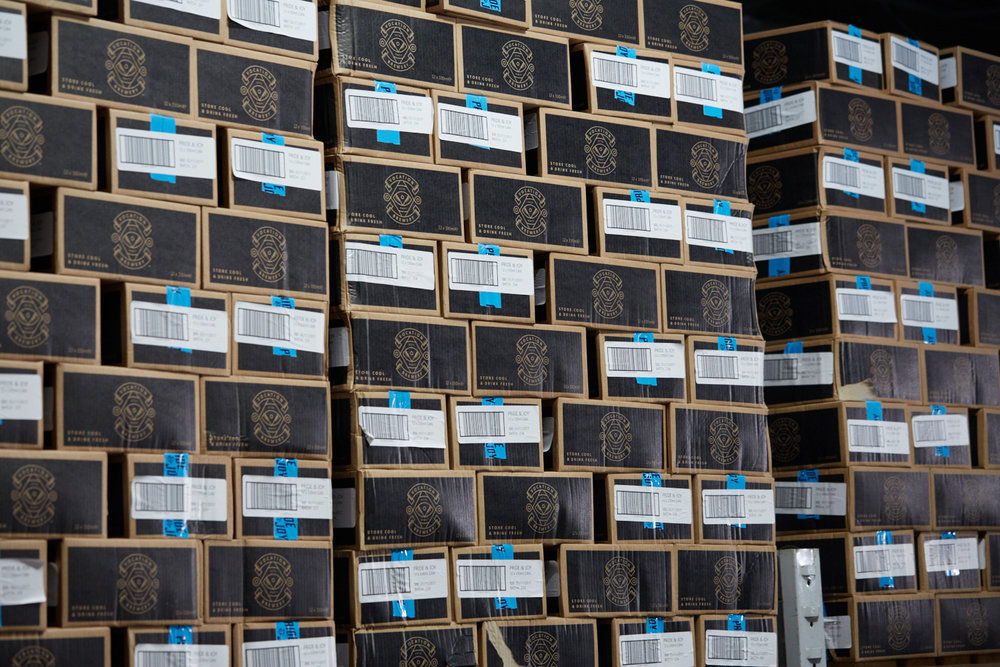 What inspiration did you turn to for developing the design?

Robot Food: John’s story. He wanted to call it ‘The Brewery on the Hill’ but for us, his story was more than just his location. After selling shares in another brewery and taking a year out, John decided that he had to come back, this time to brew beer that he wanted to drink—heavy hitting, hop forward American style ales. It was his passion and vision that made Vocation Brewery what it is.

How did you determine the colour palettes for each brew?

Robot Food: We use colour to show flavour; what we choose for the outside of the can is always synonymous with the beer inside. Colours have to be unmistakable and instantly recognisable to each specific flavour. For the ales, we wanted the name to take centre stage and chose strikingly bold colours to pop against the black backdrop. For the new lagers, the focus was the crisp, fresh taste of the range, so we opted for a white background and zingy, vibrant streaks of colour with plenty of attitude. 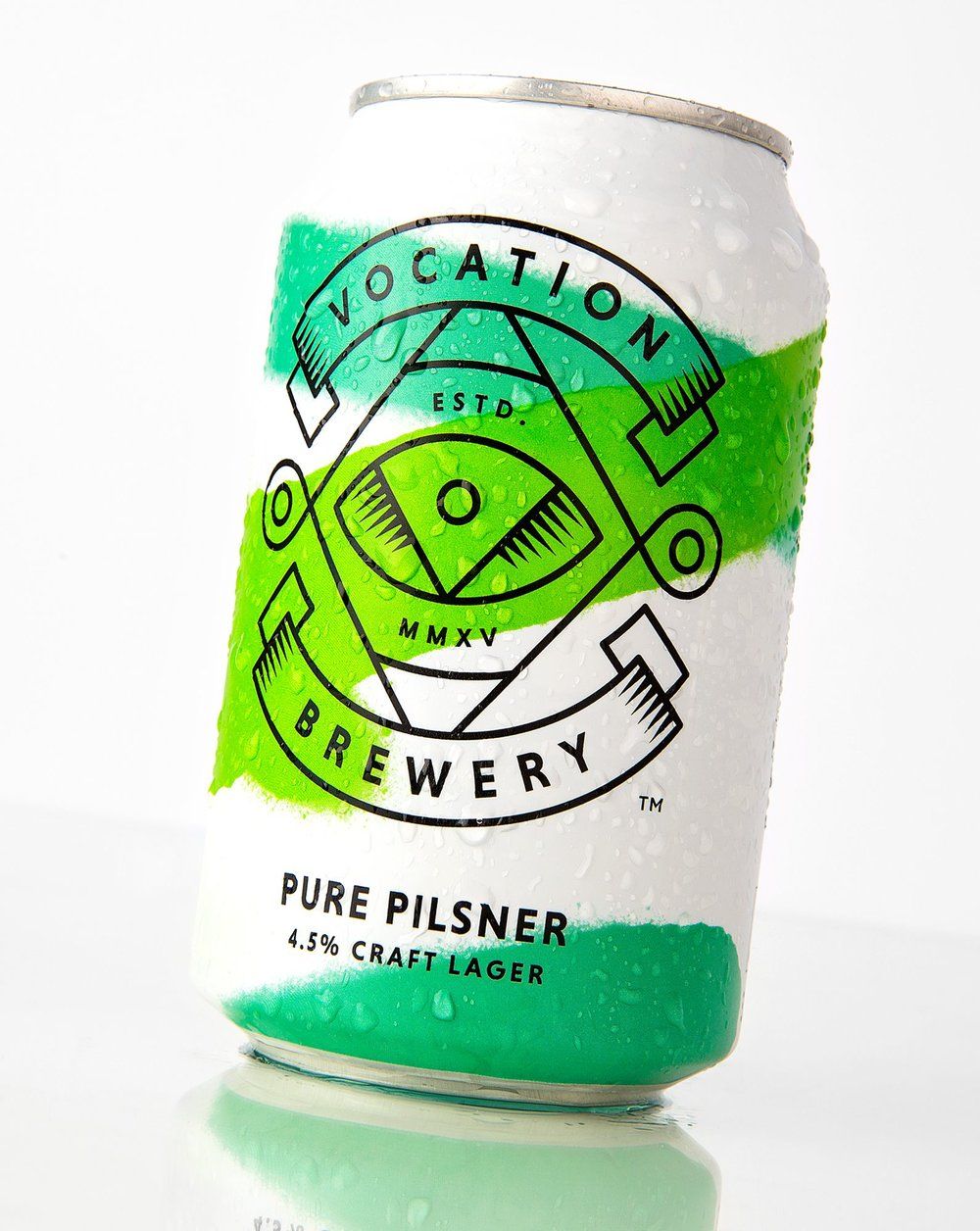 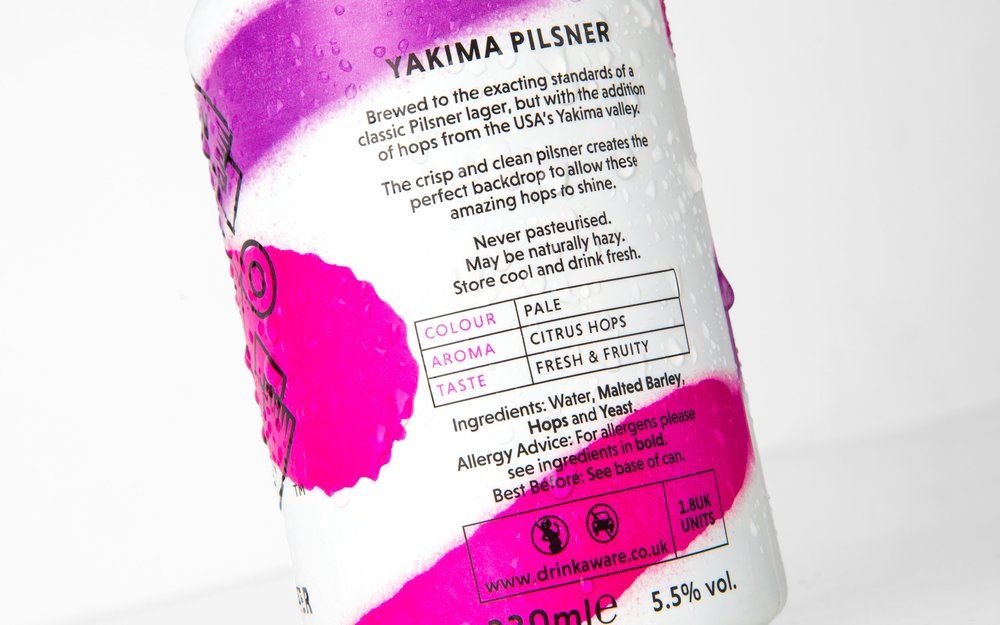 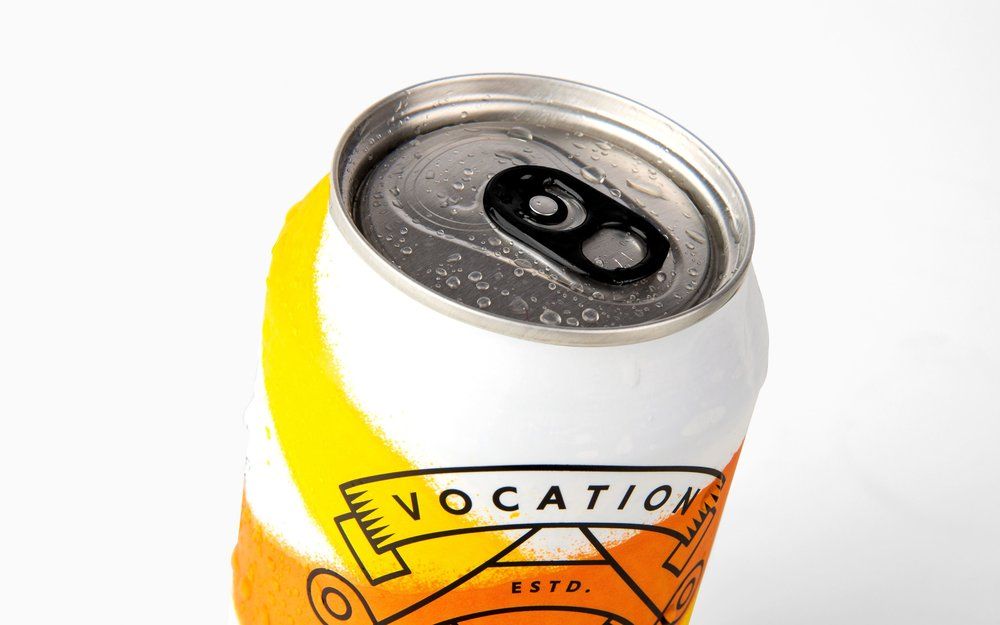 Robot Food: The biggest challenge for us was how to signify craft in a new way, to a new breed of beer drinker. At the time, craft beer was growing at such a rapid pace but a lot of the design that coincided with this growth began to fall into ‘me-too’ territory. As a result, it failed to stand out or cut through and we saw an opportunity for something that could strike a balance between a ‘wacky’ illustrative style and the rigid consistency of mass market.

We wanted to create an identity for Vocation that would challenge the category by reinventing and modernising the design formula of old. We took craft sensibilities and offset detailed illustrations with contemporary and bold, angular typography, for an identity that is sharp and delivers in a more crafted and impactful way.

Robot Food: The brand confidence. The ales and lagers are night and day in their execution but both unequivocally Vocation in the way they totally disrupt the category and create huge shelf stand out. Whether it’s intricate illustration or spray paint, white cans or black cans, the thinking is the same—just applied differently. For the new projects we’ve got coming up with Vocation, it means that nothing feels out of bounds—there’s just as much excitement around the possibilities as when we first started.

Robot Food: Being able to work with the freedom that we were given has reinforced the value in being confident to follow through on a gut feeling. It sounds cheesy to say ‘trust your instincts’, but when they’re right—why not? For us it meant realising an idea that felt purer and more authentic, and it’s attracted attention from some great new client partners because of its impact. 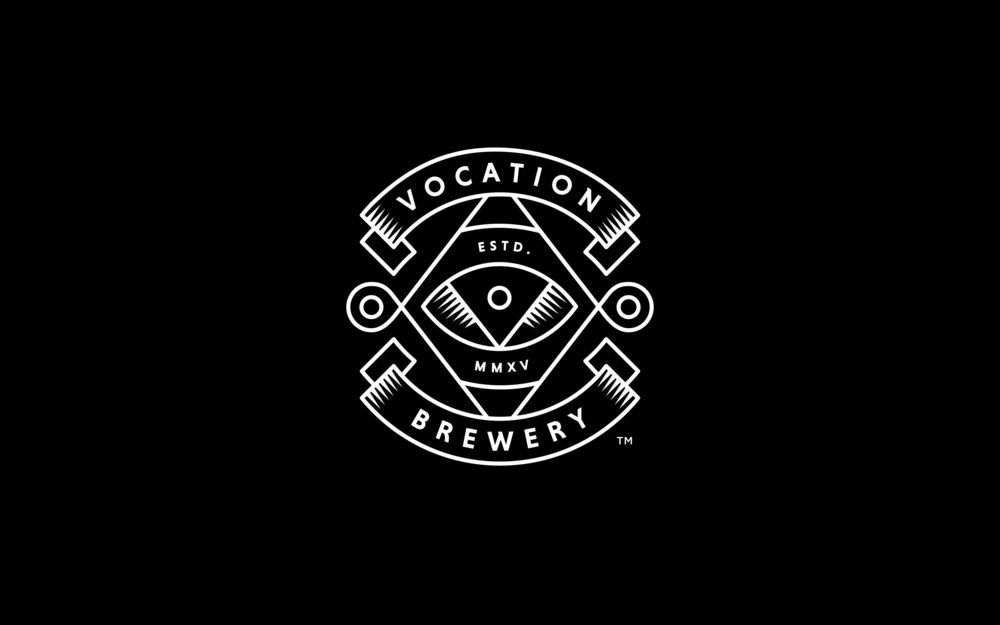 5 Ways to WOW with Sustainable Packaging